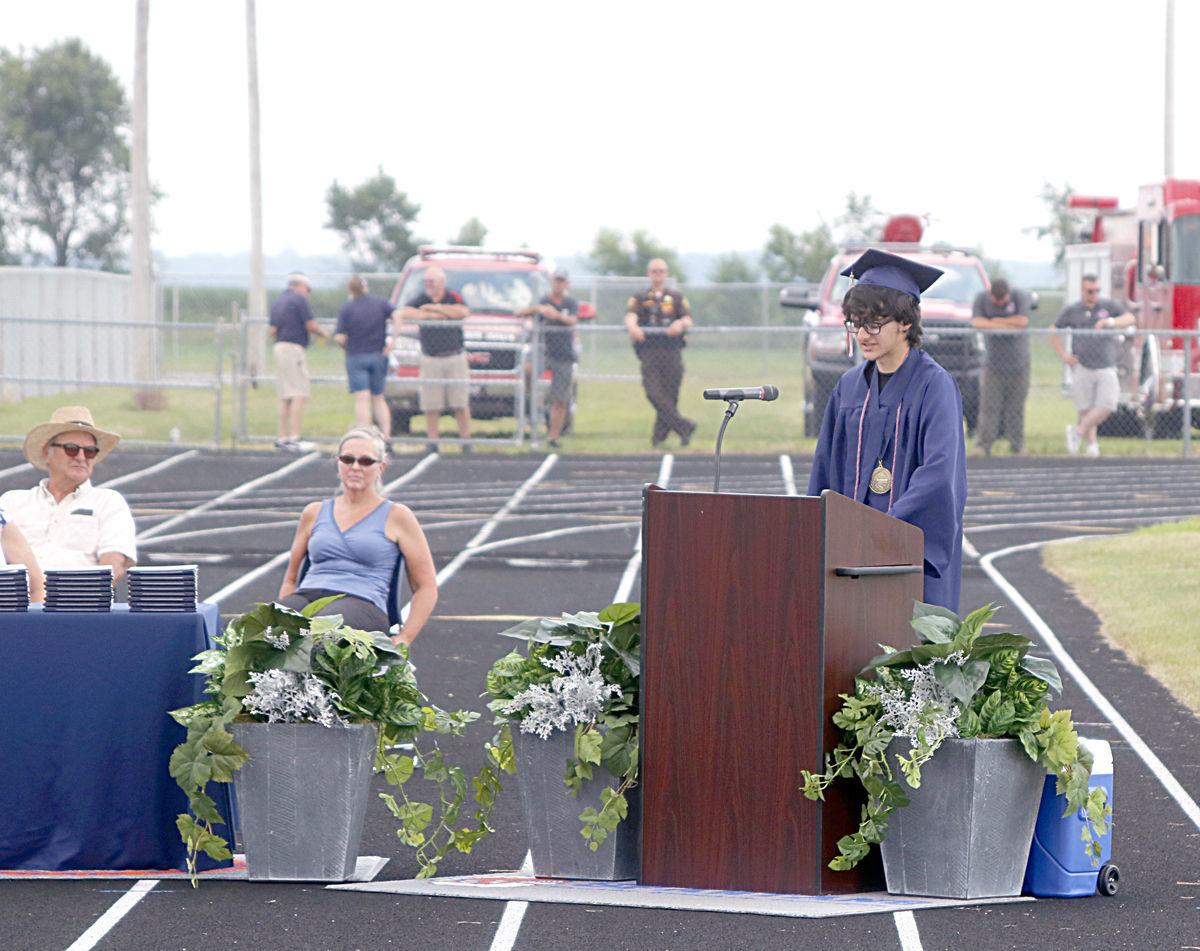 Class Valedictorian Brandon Kingdollar, who received a perfect SAT score and is headed to Harvard, challenged his classmates to change the world. 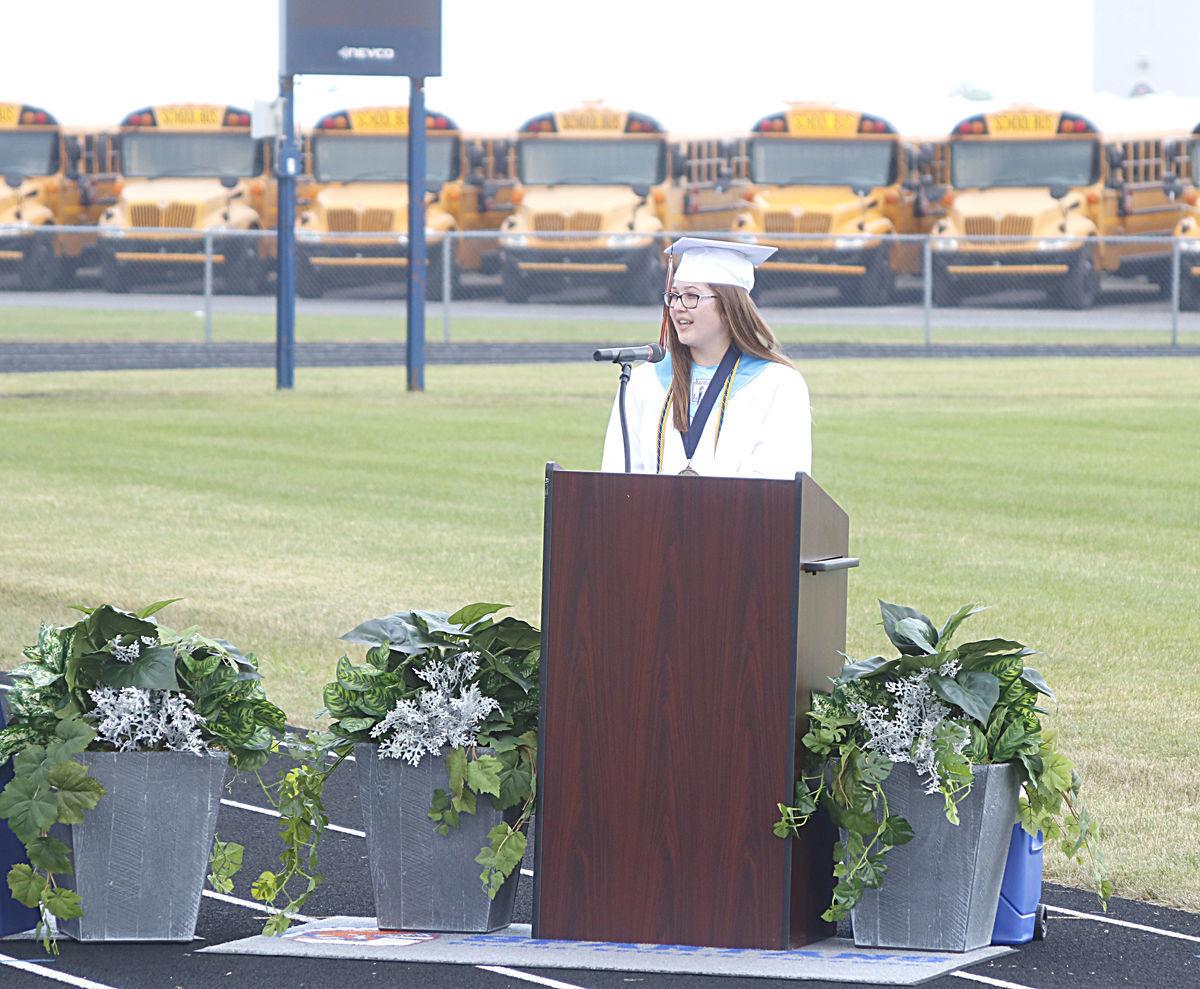 Class Valedictorian Brandon Kingdollar, who received a perfect SAT score and is headed to Harvard, challenged his classmates to change the world.

MOROCCO — The North Newton Class of 2020 will share a special bond unlike any other class before them and the 73 graduates were able to beat the 91-plus degree heat to accept their diplomas July 5 being together as a group for the first time in nearly four months.

“After 2:16 p.m. on March 13, I didn’t know if I was going to see you again as a group,” Rod Coffing, North Newton Jr./Sr. High Principal, said to the graduating class. “We have only been together for a year, but we have a special bond that we will always share.”

“As we all know this graduation ceremony looks very different, but as seniors, we appreciate the continued support throughout the craziest of times,” said Ashley Churchill, North Newton Salutatorian, and Lilly Scholar. “This pandemic and abnormal end to our year has proven that our family, friends, and community will be there for us no matter what, and will always lend a helping hand to make us feel special. I would like to send a huge thank you to everyone who has worked so hard this year to make sure we feel celebrated even with the changing times.”

It was a historic year academically for the Class of 2020 as well with students going to Rose-Hulman and Harvard, a student scoring a perfect score on the SAT, the Newton County Lilly Scholar, and runner-up. This was also the class that started the petition and fought for the outside graduation.

“We might only have 73 graduates, but we have so much to be proud of,” said Churchill. “I would not have wanted to be a part of any other class because this one is so powerful and memorable. I cannot wait to see the doctors, farmers, teachers, lawyers, and all the other careers that we choose. I look forward to seeing where everyone ends up, and how we impact the world. As I stand up here in my cap and gown I am reminded of the past, present, and future, and I will be forever grateful for my time as a North Newton Spartan.”

The class Valedictorian, Brandon Kingdollar, who had the perfect SAT score and is headed to Harvard, challenged his classmates to change the world.

“Today is not the end of our journey—it is the beginning, and there’s still much work to be done,” said Kingdollar. “On that note, I’d like to issue all of you a challenge today. If we work together, I’m confident that we can achieve this. I know you have what it takes. I’m challenging you to save the world. We live in a dangerous world, a frightening world. None of us know what it was like before 9/11—we came into a world where we can’t leave our doors open, where we can’t trust strangers, where we have to live with security that strips away our privacy, our individual freedoms. When we step onto a plane or go to a music festival or go to school or even just walk down the street, we do so with the knowledge that it may be the last thing we ever do. But teenagers are supposed to be carefree. We’re supposed to party and go wild and make dumb mistakes. We’re supposed to be irresponsible—it’s sort of a privilege—but the world we live in has forced us to forego fun times, forego the recklessness of youth. Forced us to become responsible at a young age. I don’t say this to scare any of you, or to paint an unnecessarily bleak picture of the world—I say it because it’s our reality. Because half the time when you turn on the news, everything is in flames. We’re coming of age alongside a global pandemic, wildfires consuming massive swaths of California and Australia, riots across the United States, and the threat of global war precipitated by a poorly-thought-out tweet. This is a world that needs saving—I think we can all agree on that.”

Kingdollar suggests starting with being kind and showing respect to each other.

“That has to be our foundation, our baseline,” added Kingdollar. “How can we expect to work together to better our community, our nation, our world if we can’t even have civil discourse if every political discussion devolves into insults and hate? Look, I won’t hide it—I don’t agree with every single one of you. Sometimes, I don’t like the politicians you support or the stances you take on certain issues. I know some of you feel the same way about me, and it’s important to understand that that’s okay. No—it’s great! If everyone agreed on everything all the time, we’d just be doing things the same way for the rest of human civilization. We’d still be out there hunting and gathering because no one had the wise idea to stay in one place and grow plants we can live on—I think all of you would agree the world would be worse off without farming. But I digress. It’s great that we disagree, that’s what progress is built on—but we still need to respect each other, respect each other’s views. This isn’t reality TV. No one gets points for coming up with the cleverest insult, and going along with the crowd isn’t going to save the world because time after time after time in our history, the crowd has been wrong.”

Step two to saving the world is caring, Kingdollar noted.

“Caring is hard,” Kingdollar said. “Caring hurts. Caring is scary because it involves trust in your fellow human, and as I’ve already pointed out, it’s become a hard world to trust in. But it’s never been more important to care because things are spiraling out of control. The greedy people, the hateful people—they want you to stop caring because it means they can do whatever they want. They don’t want you to vote. They don’t want you to protest or speak out or go out into this world and make a difference, because they like it just fine the way it is.”

Kingdollar, who also is a correspondent for the Newton County Enterprise, concluded by saying being informed is the third step in making the world a better place.

“Anytime you hear something, check it out for yourself,” Kingdollar added. “Our teachers—credit to them—talk a lot about critical thinking and it’s something our society is severely lacking right now. The coronavirus isn’t the only thing spreading out there—fake news is, too. Our enemies have turned the grapevine into a powerful weapon because they’ve discovered that when we hear something that makes us angry, that makes us scared, our first instinct isn’t to verify it, to look at who’s saying it—our first instinct is to share it, spread it, starting a dangerous wildfire of misinformation and lies. Don’t believe everything you hear. Teachers will tell you Wikipedia isn’t a source because they’re just citing information from other places—well, I’ll raise you that CNN isn’t a source. Fox News isn’t a source. My rule of thumb—I tend not to believe something until I see it everywhere. Because for big news, you’re not going to see it on just one station—you’re going to see it everywhere. To be informed, you have to care. You have to pick up a newspaper—and I swear I’m not just saying that because I work for one—but more than that, you have to pay attention. The world is on fire and we have to put it out. We need to be better than the leaders of today—we can’t allow prejudice and hate to divide us, distract us from the crises of the future, or like today, they will spiral out of control. We have a fighting chance, but it’s clear that things need to change. I want to be able to turn on the news with a smile on my face. I want to be able to go to sleep at night without tossing and turning, wondering if the world will still be there when I wake up. Most of all, I want the world to stop getting worse and start getting better. The change starts with you, today. You are strong and wise, and I am very proud of you. I’m glad to have spent the last four years with you. I believe in you. Now let’s go save the world.”