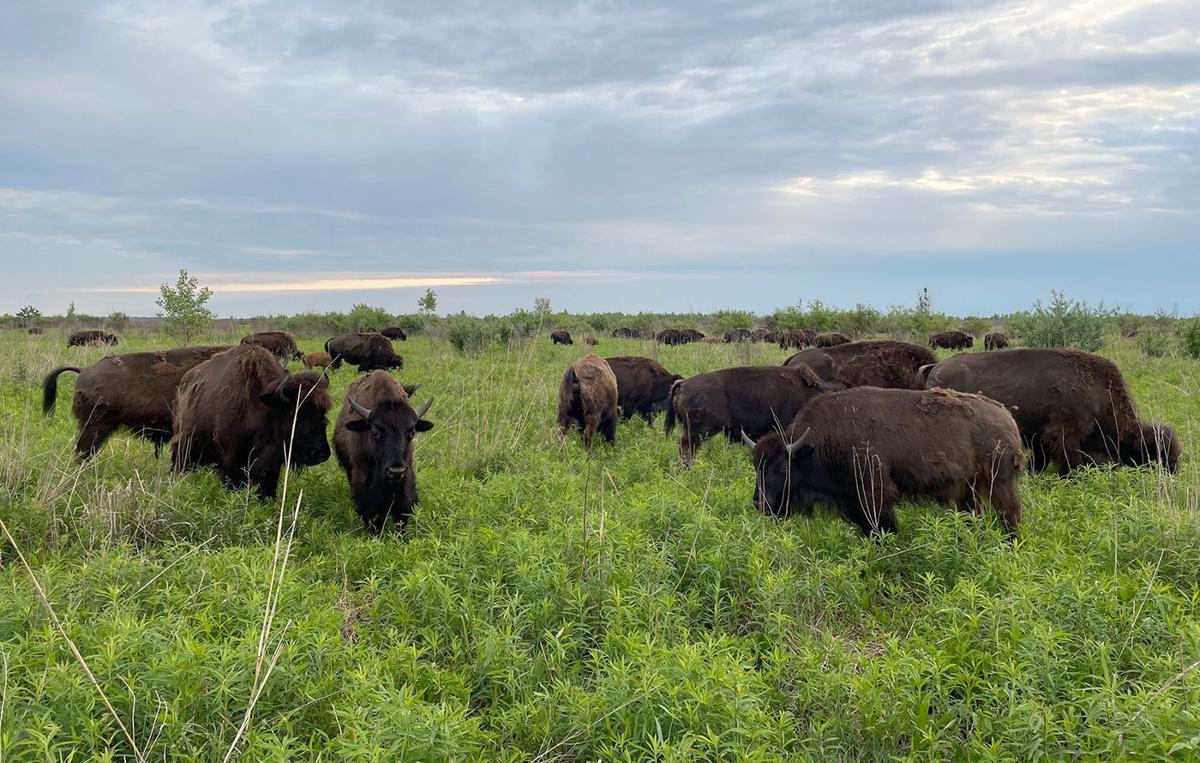 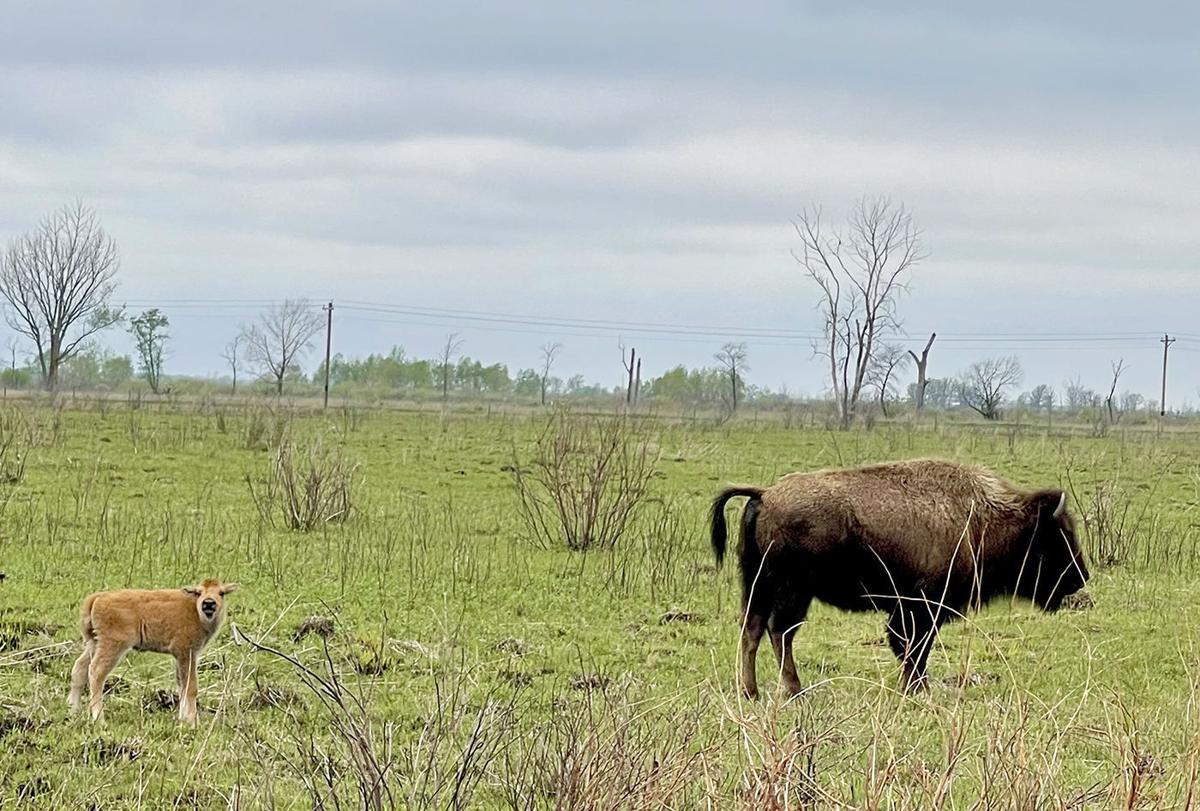 A bison calf stays close to its mother at Kankakee Sands.

A bison calf stays close to its mother at Kankakee Sands.

It’s that exciting time of the year when the bison calves are born!

At the close of 2020, we had 93 bison in our Kankakee Sands herd. As I pen this article, 21 calves have already been documented in the bison pasture, which means that for the first time in the history of Kankakee Sands, we have more than 100 bison grazing on our prairies.

With 32 mature cows in our herd, we are expecting somewhere between 25 to 30 calves to be born this spring. Cows typically give birth to one calf per year; twins are rare.

Bison calves, with their red fur and sprightly 40-pound bodies, are a joy to watch romp on the prairie. These energetic little “red dogs” are able to run when they are just hours old.

And run they do!

While the female bison calmly graze and chew their cud, the calves are often seen sprinting around the matriarchal groups in wide circles, only to stop suddenly and decide that it is time to nurse.

As the year progresses, the calves will run less and eat more; their fur will change from red to brown, and they will begin a steady ascent to their ultimate adult weight of weight of 1,200 pounds for a female and 2,000 pounds for a male.

There’s such a natural comfort in watching the calves grow up on the prairie. It seems so “right” to have them here that it is sometimes hard for me to remember that, just five years ago, there were no bison at Kankakee Sands.

It was in October 2016 that we first brought 23 bison to Kankakee Sands to help manage our prairies. These keystone species of the North American prairies create habitat for insects, birds, mammals, reptiles and amphibians as their massive bodies move across the prairie, churning up soil, eating vegetation, defecating and reproducing.

This Week at the Newton County SWCD

Kentland High School, a great place to grow up

Our Kankakee Sands’ bison program is part of a larger initiative of The Nature Conservancy (TNC) in North America to return bison to the prairie landscape. Thirteen bison herds totaling 5,800 bison are owned and managed by TNC at such properties as Nachusa Grasslands in Illinois, Dunn Ranch in Missouri, Broken Kettle Grasslands in Iowa and the Tallgrass Prairie National Preserve in Kansas.

Can you imagine that in pre-settlement times, there were an estimated 30 million to 60 million bison roaming North America? These massive one-ton herbivores grazed the landscape from Canada to Mexico and New York to California.

A mere 300 years later, at the end of the 19th century, nearly all of the bison in North America were gone. Only 325 bison existed on earth. In Indiana, the last wild bison was killed near French Lick, in 1830.

Bison were not only an important source of food and materials for Indigenous Peoples in North America, but also culturally and spiritually significant. The Army recognized that with bison gone, the plains tribes could be subdued, and their populations reduced.

Since those dark days, many private citizens and conservation organizations around North America have been working together to bring bison back to the landscape. Thanks to the efforts of many, including but not limited to Samuel Walking Coyote, Fred DuPree, Charles Goodnight, the American Bison Society, National Park Service, zoos, Native American tribes and Canadian First Nations, Canadian and Mexican wildlife management agencies, state wildlife management agencies, academic institutions, and non-governmental organizations, bison now number around 350,000.

TNC is proud to be part of this effort and work in partnership with others.

Come celebrate 100 bison with us this spring! Visit the Bison Viewing Area at Kankakee Sands, open from 7 a.m. to dusk every day of the year, and share the excitement. Hoorah!

We would like to extend a very special thank you to the Natural Resource Conservation Service for permission to graze bison at Kankakee Sands on acres enrolled in the Wetland Reserve Easement program.

The Nature Conservancy’s Kankakee Sands is an 8,300-acre prairie and savanna habitat in Northwest Indiana, open every day of the year for public enjoyment. For more information about Kankakee Sands, visit www.nature.org/KankakeeSands or call the office at 219-285-2184.