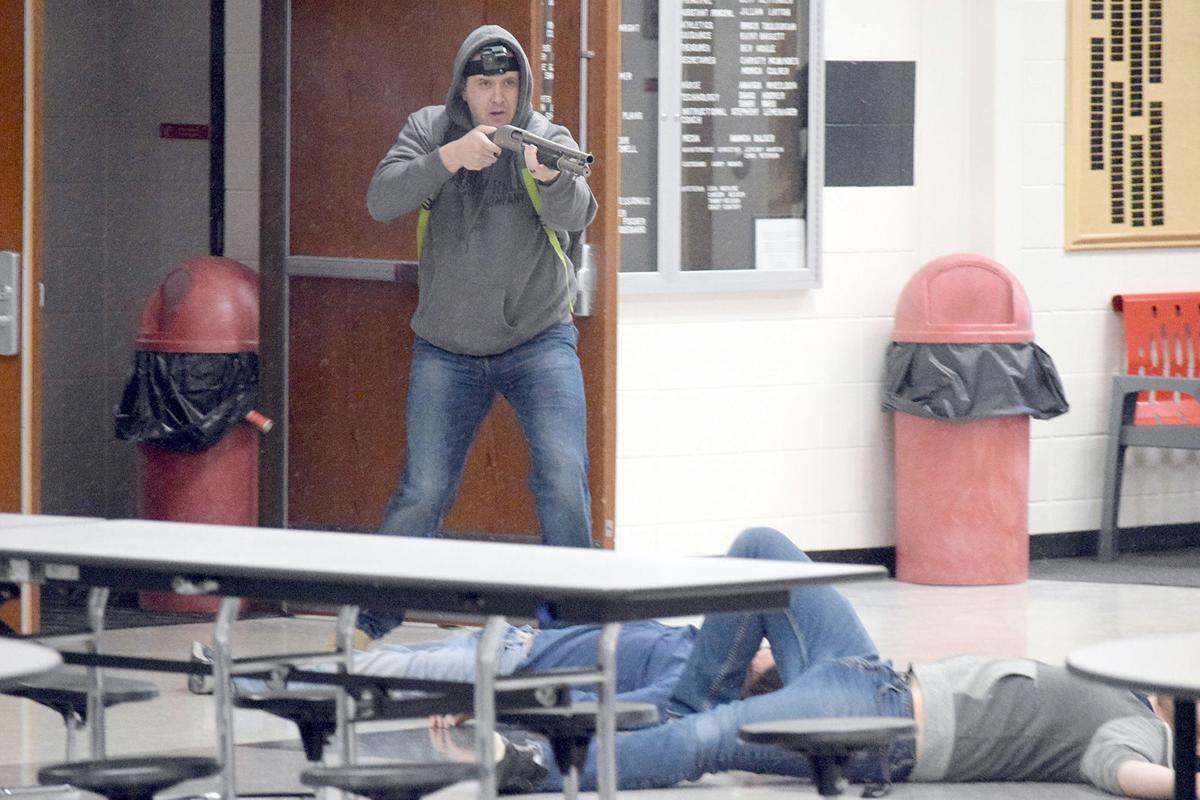 A law enforcement officer poses as a “shooter” during an active shooter training exercise March 22 at Frontier Junior/Senior High School in Chalmers. 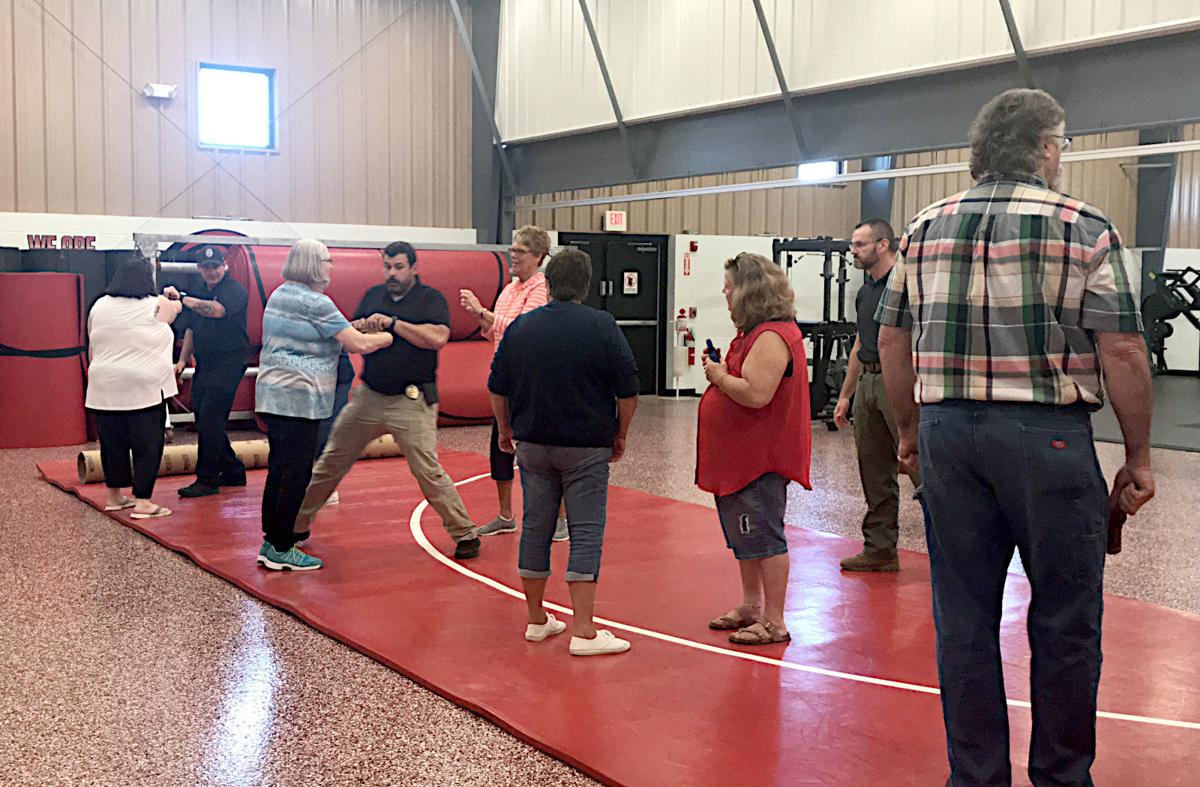 A law enforcement officer poses as a “shooter” during an active shooter training exercise March 22 at Frontier Junior/Senior High School in Chalmers.

CHALMERS — Indiana schools now have more options when it comes to preparing for the possibility of an active shooter.

A bill signed into law in early May will grant funds more easily to school corporations in the name of safety.

Schools must comply with the law by completing threat assessments by mid-2021 and conducting active shooter drills within the first three months of the academic year. Compliance with these requirements mean the school may earn funds that can be used to hire law enforcement officers.

Frontier School Corporation has already been working with local law enforcement agencies for the past two years, according to Superintendent Dan Sichting.

“We’ve received the Indiana Secured School Safety Grant,” Sichting said. “We use the grant to hire our school resource officer.”

The grant provides matching funds for schools, up to $100,000 with a 100 percent match. Frontier schools have applied for the program and received grants of about $35,000 per year for the past two years, and are eligible for even more in the coming years.

To qualify for these grants, Frontier must conduct active shooter drills at least once a year, and within the first 90 days of school. Sichting says that isn’t a problem, especially as shooter lockdown drills count for the grant — not just the drills with people role-playing shooters and bringing firearms into the building.

What has Frontier done with these funds?

“We put in new cameras,” Sichting said. “Those cameras link with the sheriff’s department.”

The linked cameras show the sheriff’s department what’s going on inside the schools, which may help in an active-shooter situation.

Frontier has also put in bollards, according to Sichting, which can prevent vehicles from driving into the schools.

“We take school safety very seriously,” he said. “We did a threat assessment this year.”

Though Frontier is preparing for the possibility of an active shooter, Sichting says there’s another, more probable threat for the community. As some school buildings are near a railroad track, the superintendent says the schools want to prepare for the possibility of derailment or the release of toxic fumes from trains.

Beyond preparing the schools for emergency situations, Frontier is also preparing its teachers for times of crisis.

“We did instruction with our staff on ‘Stop the Bleed,’” he said, explaining how teachers were invited to voluntarily receive tourniquet training.

Further, the corporation is considering enacting a “common language” between the schools and local law enforcement agencies to prevent confusion and promote efficiency in the case of an active shooter or similar emergency.

Twin Lakes is no stranger to preparing for active shooters, and actually came under fire earlier this year for one of its active-shooter drills.

The Herald Journal reported in March that some teachers were shot with pellet guns during an active-shooter training, allegedly leaving bruises and welts on those participating.

Several months after those events, Superintendent Michael Galvin acknowledged that school safety is still at the forefront of the school’s mind.

“Our whole goal is to protect staff and students,” he said.

Much of the money Twin Lakes places toward school security goes to funding its school resource officer, who spends time at the high school and rotating to other buildings. Other investments Twin Lakes has made involve upgrading its security cameras, echoing Frontiers’ decision to bulk up its own camera system.

“We’re talking about cybersecurity (too),” Galvin said. “There’s a lot of different facets (of school safety).”

What’s difficult for Galvin and Twin Lakes as a whole, he said, is ensuring the school buildings are safe while also keeping the school inviting and welcoming to parents, students and staff. Galvin said while school security is a must, the systems promoting students and staff safety should be in the background, not interrupting the education process.

One possibility is giving teachers “fobs” so they can enter buildings with keyless entry, to keep entrances and exits secure from possible ne’er-do-wells.

Twin Lakes has also taken advantage of Indiana Gov. Eric Holcomb’s free-or-reduced-price metal-detectors, but some state policies and logistical problems keep the schools from using them on a daily basis.

Galvin said state law requires law enforcement officers can only “wand” students of the same-sex — a problem when there aren’t any female officers in the Monticello Police Department, according to the superintendent. Plus, with more than 2,300 students at Twin Lakes, it’s not extremely viable for each student to be inspected as they enter school property.

Still, Twin Lakes is focused on keeping its students safe, and Galvin says though they’re granting $50,000 in matching funds from the state, they spend “much more” than the total $100,000 in funds specifically on school safety.