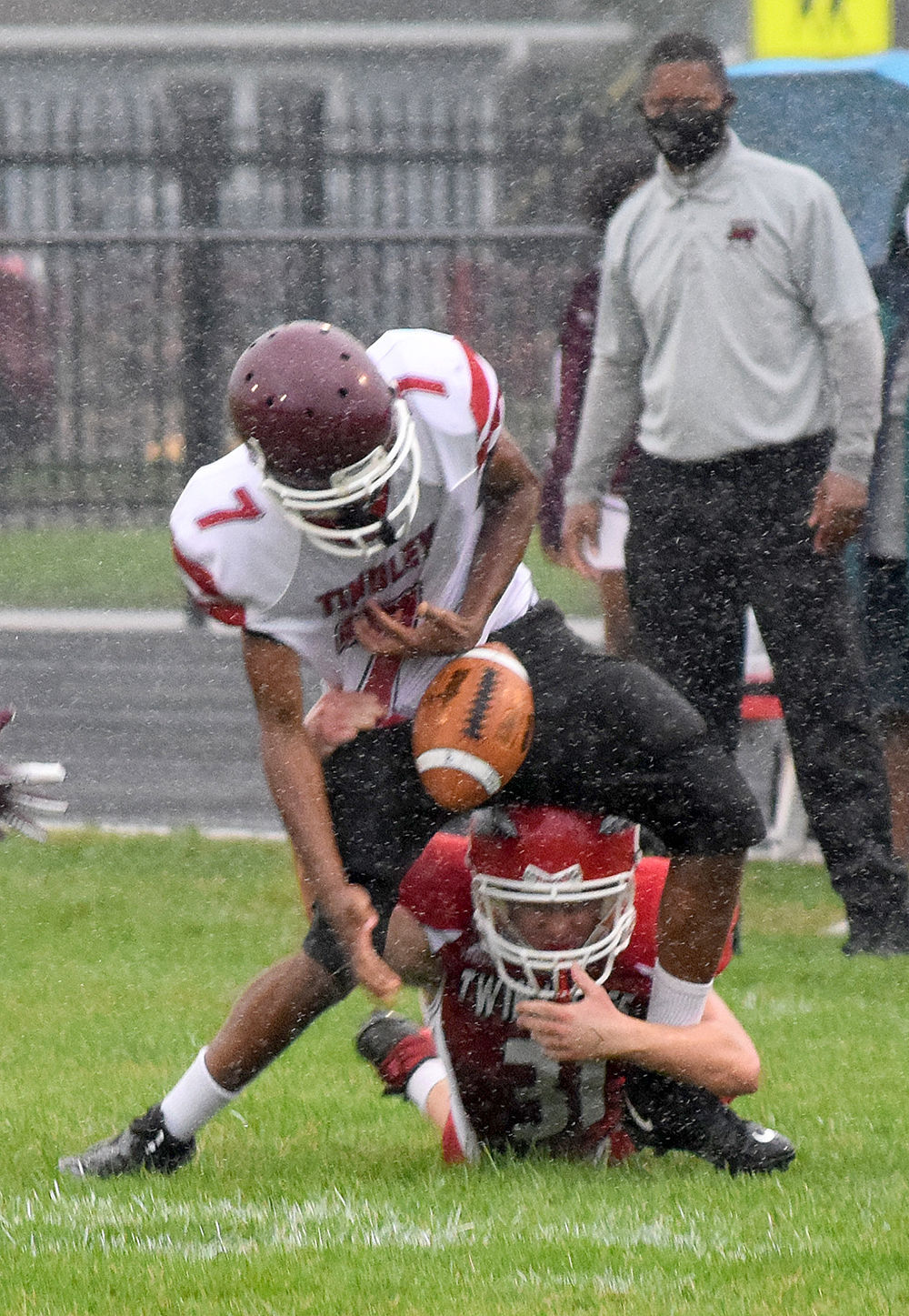 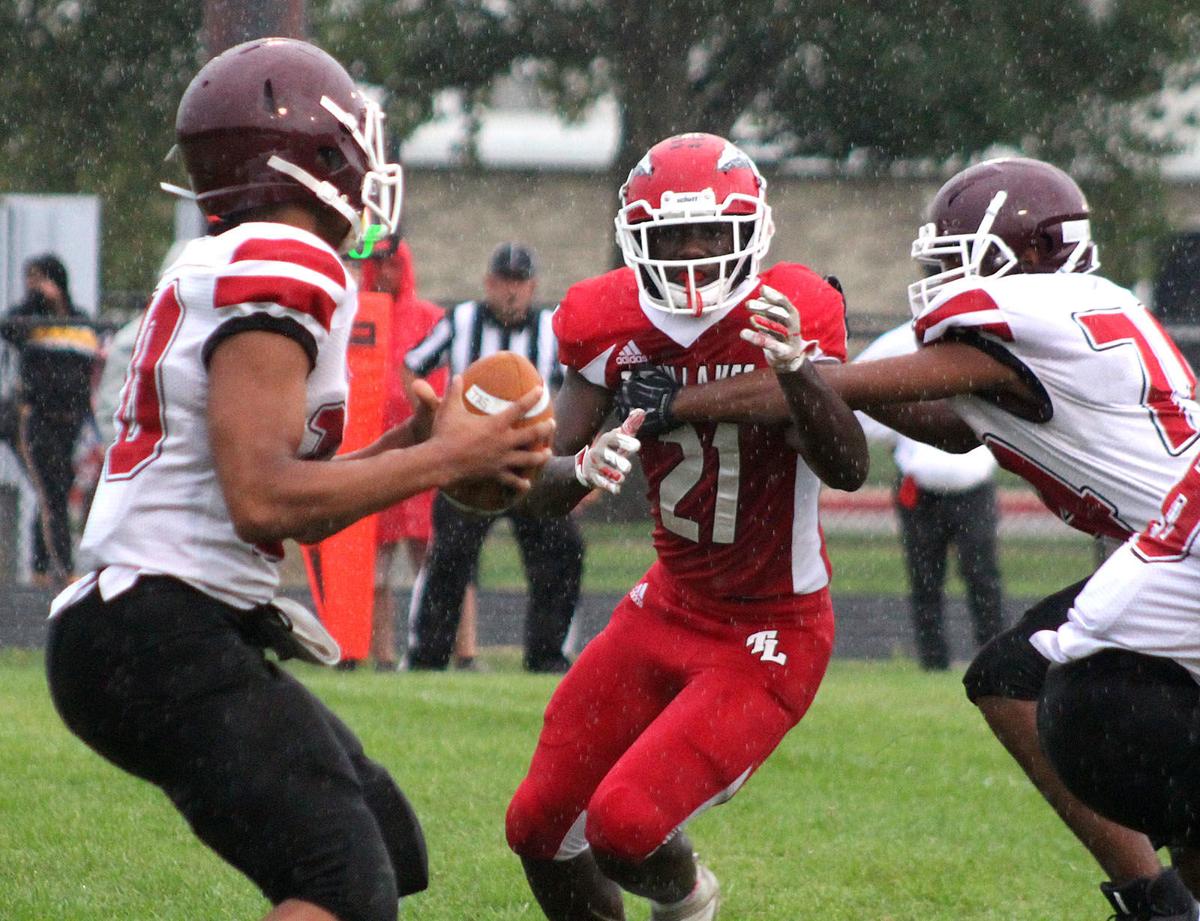 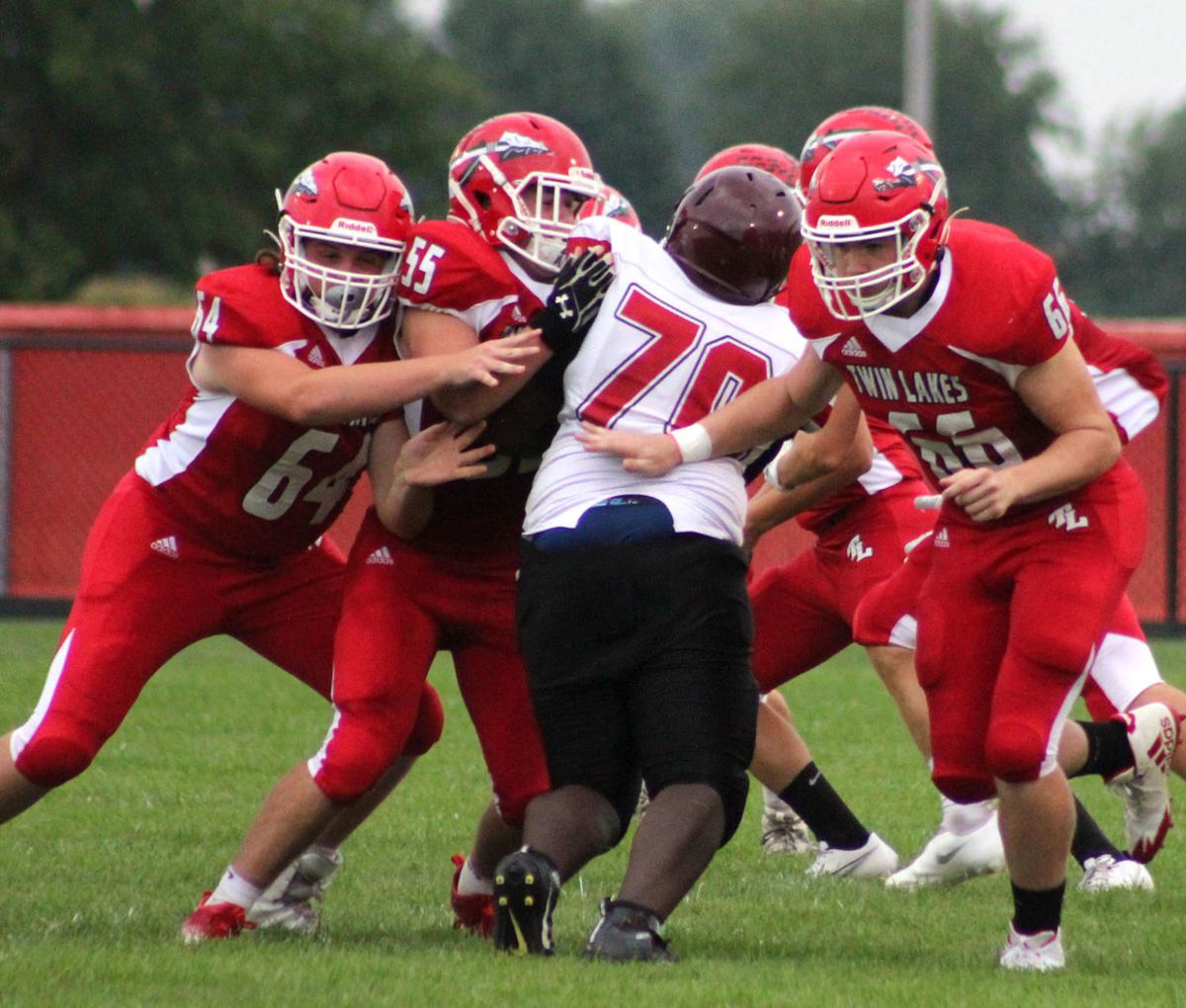 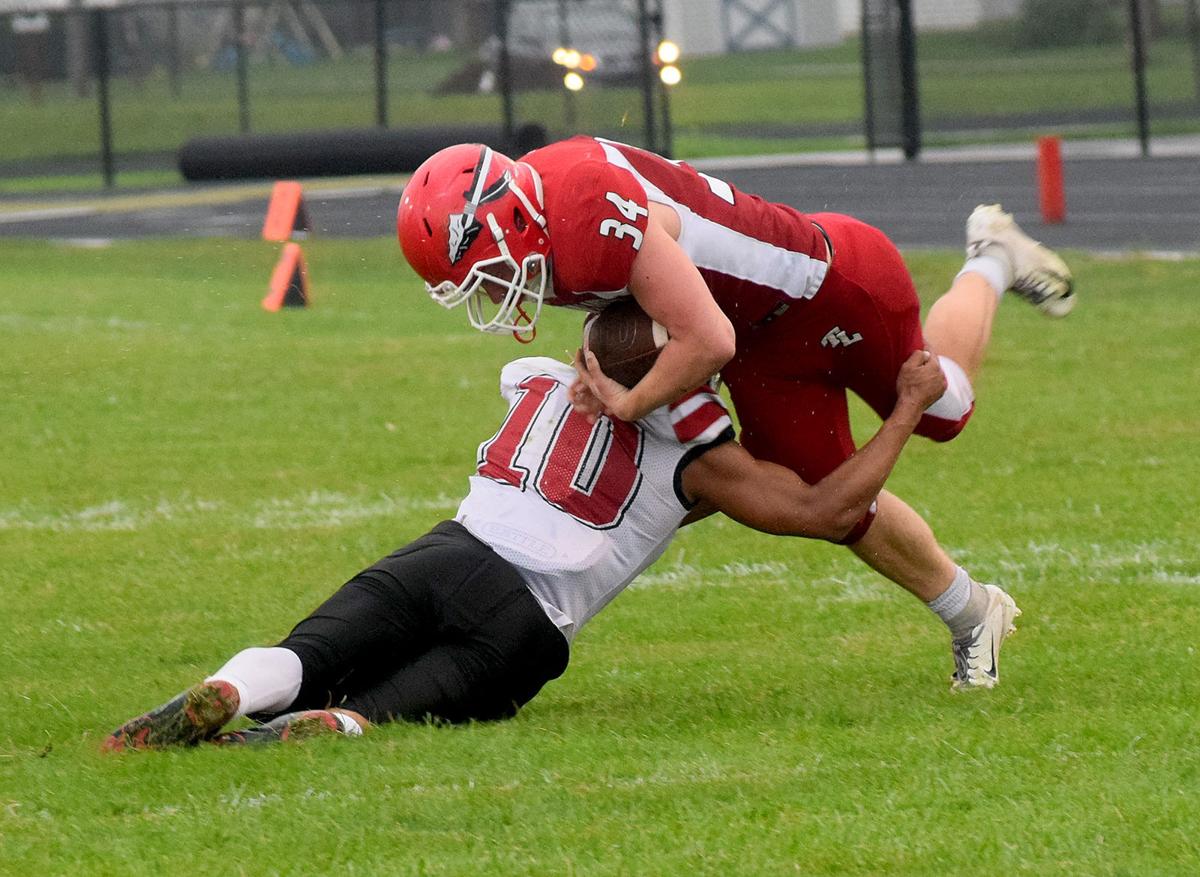 Jaylen Roush catches a pass over the middle before Indianapolis Tindley's Antonio Robinson hits Roush on Saturday in Monticello.

Jaylen Roush catches a pass over the middle before Indianapolis Tindley's Antonio Robinson hits Roush on Saturday in Monticello.

Twin Lakes kept its record perfect during this imperfect season with a 20-6 win against Class 1A Indianapolis Tindley on Saturday that was every bit a team victory, according to the players and coaching staff.

The Indians (3-0) faced a shortened practice schedule and an unknown opponent, as COVID-19 forced the closure of each school for more than a week and had two days to prepare for the contest. Twin Lakes was without multiple starters and multiple seniors, and lost sophomore tailback Saige Brandt to an injured ankle on the game’s fourth play.

At the game’s close, assistant coach David McFadden asked every dressed athlete that played defense to stand up. Roughly 20 players rose and he said, “Thank you. You saved our butts.”

“Robinson was the running back of the year for the city schools of Indianapolis last year. He’s a very good football player, and we knew he could come in and run around and make some plays,” Twin Lakes head coach Kevin Sayler said.

He mentioned every member of his front seven, noting linemen Kayvion Jackson, Derek Overmeyer and Jaylen Roush “did a whale of a job” and crediting linebackers Ean Bowsman, Brandon Franscoviak, Isaac Lashbrook and Joey Pickering with being on the scene early and often all night.

“I think coming into the game we did underestimate this team because we saw them as a 1A school,” Roush said. “As soon as they came out and hit us in the mouth (and scored first), second quarter we came back and we were ready to play.”

Robinson led Tindley to a 6-0 lead in the first quarter, connecting with Jayden Pinkston on a 39-yard touchdown. Pinkston was initially called down inside the 1-yard line, and five plays — including a penalty on the Tigers — were run.

Twin Lakes thought it stopped Tindley on fourth-and-goal at the 11, but the officials convened and gave the Tigers the touchdown after explaining their mistake to both coaching staffs.

In the second quarter, the teams traded fumbles and Pinkston intercepted Twin Lakes quarterback Blayze Woods in the end zone to kill a scoring drive. Pinkston returned the ball 100 yards for a touchdown, but a block in the back negated it.

Jackson recovered a fumble after the Tigers marched into Indians’ territory, but the home team didn’t crack the scoreboard until less than a minute remained in the half.

The Indians marched 54 yards in a brisk 1 minute, 41 seconds after forcing another Tindley punt, with Woods punching through from four yards out for a 6-6 score. Colin Seymour booted the extra point with 38 seconds left in the half, and Twin Lakes never trailed after that.

“They were getting to us the first half, and then we started picking it up about the second quarter, started getting ourselves together,” Franscoviak said. “We were excited about the touchdown, but it was still close. We still had to hit them.”

Roush shifted into the lead tailback role after Brandt went down, rushing 23 times for 139 yards and two scores. The senior ran for 436 yards and a pair of scores in former coach Scott Mannering’s wing-T system, so he was familiar with having to produce when called upon. Roush quickly credited the offensive line, also slightly retooled, for his production.

“I have to give all the credit to the line on that. The holes were massive all night,” he said. “I don’t think I can take the credit, because the line helped me out a lot.”

Sayler told Brandt, Roush and Jackson they’d rotate series throughout games and the season. Roush missed the Aug. 28 win against Seeger, but was in perfect position to step up in Brandt’s absence.

“That was a big challenge to overcome,” he said of losing Brandt. “It gave me and Kayvion a lot more reps, and we were both going both ways. But we overcame it.”

Roush scored on a 4-yard run with 2:12 left in the third quarter to give the hosts breathing room (14-6) and punctuated the win on a 15-yard burst that came with 20 seconds left in the frame.

Twin Lakes recovered a pair of Tindley fumbles in the final two minutes, and Pickering’s recovery with less than a minute left offset an Indians fumble three plays earlier.

“The time off was kind of motivation for us; we were ready to hit,” Franscoviak said. “We also have to give credit to the defensive line, because they were getting a lot of pressure (on Robinson). And our outside linebackers turned him in if he got by.”

By then, an on-and-off drizzle became a steady one, and the fourth quarter became a war of attrition. Each team had abandoned the passing game by then, and all Twin Lakes had to do was bend but not break on either side. Tindley punted three times and the Indians turned the ball over on downs twice before getting it back for a final kneel down.

“Two weeks off gave us a little hardship, but we had two days of pretty good practice,” Lashbrook said. “That got us into shape, and when we had practice (Saturday) morning, we just made sure we had things locked in.”