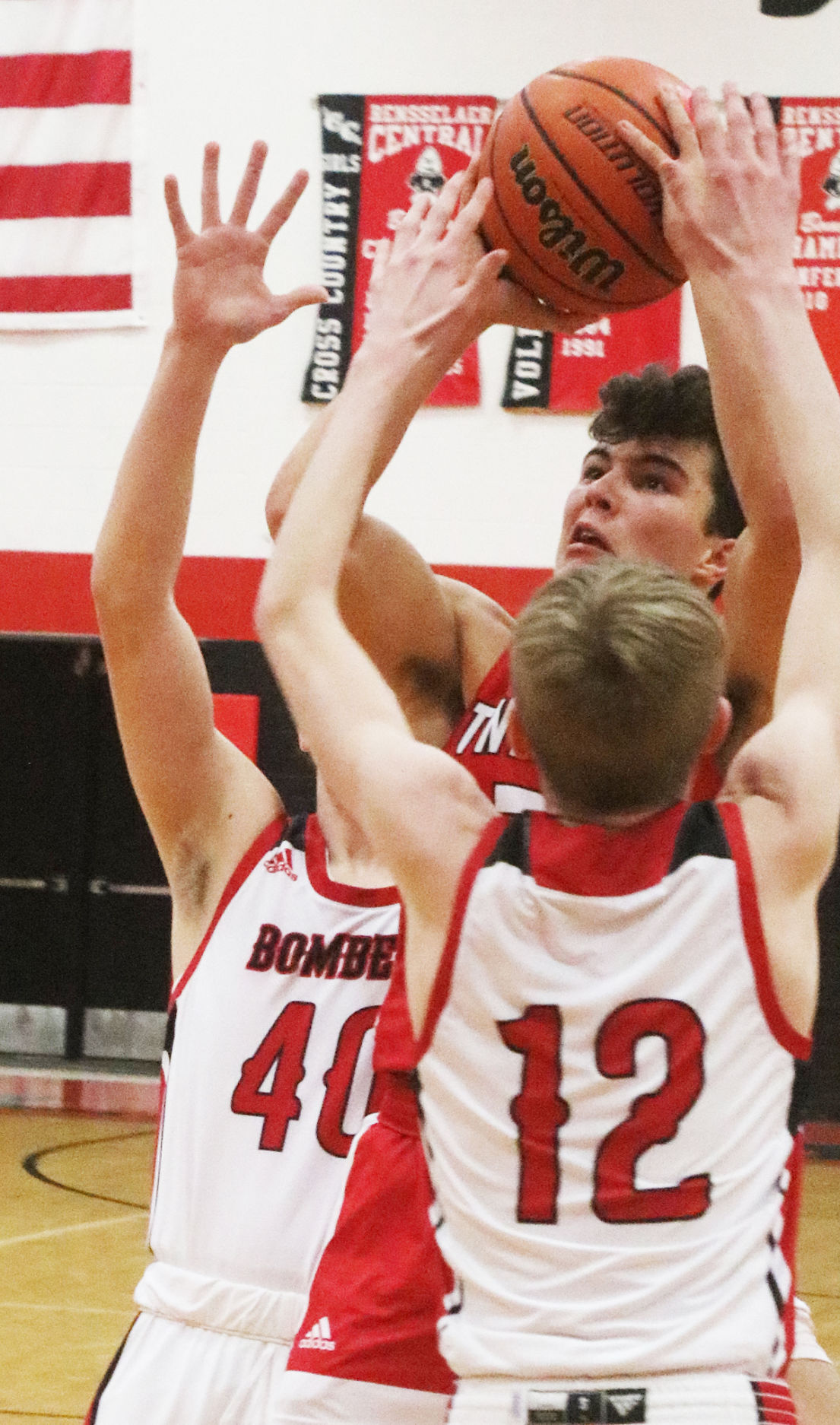 RENSSELAER — Twin Lakes junior Clayton Bridwell had to be disheartened to see his team’s game with Rensselaer Central approach halftime.

Prior to stoppage of play, Bridwell poured in 20 points over the game’s first 16 minutes, including 15 in the second quarter, to finish with a game- and career-high 24 points in leading the Indians to a 69-42 romp of its Hoosier Conference foe Tuesday night.

“It felt good,” Bridwell said of his performance. “My teammates were getting me the ball. I just want to thank them for giving me the opportunity to score. They gave me the ball when I was hot.”

The Indians had six 3-point baskets in the first half, including four by Bridwell. They hit 19 of 29 shots overall in the first two quarters, with Bridwell going 8 of 12 from the floor over that stretch.

Though he didn’t keep up his torrid pace in the second half, Bridwell still managed to hit 2 of 5 shots to add to his total. Overall, he was 10 of 17 from the floor, including 4 of 7 from 3-point territory, to lead all scorers.

“He did a good job of finding shots and making them,” Indians coach Kent Adams said. “He had a lot of confidence.”

Gage Businger added 16 points and Kahari Jackson had a pair of 3s with eight rebounds and seven assists.

For the Bombers, senior Josh Fleming had 16 points, but was held to 5 of 15 shooting from the floor. He added seven rebounds, four steals and two assists.

Fleming, the team’s leading scorer the past two seasons, came into the game averaging 22.3 ppg.

“He gets to the basket so well, and we wanted to contain him the best we could,” Adams said of Fleming. “When he’s having to chase back on defense that hurts his offense a little bit. He wasn’t getting his opportunities. It was just a good effort by us.”

Junior Tate Drone, who was the focal point of Rensselaer’s offense early before Twin Lakes gained control late in the first quarter, had 13 points and six rebounds.

“We went to a zone,” he said. “We got into massive foul trouble right off the bat. Noah Johnston, on the first possession, doesn’t even get down to the other end of the floor and he’s got two fouls. We knew like every team we play we’re going to be deficient inside and have the size or strength to battle down low. We’ve got to rely on our quickness and jumping ability to get rebounds and go. Once we got going, our kids got a lot of confidence and we started to make nice passes and sharing it around.”

At 6-foot-4, Drone serves as the tallest player on the floor for the Bombers. His teammates attempted to get the ball inside to him early, but went away from that strategy as the Indians built on their lead.

“We’re playing really well together as a team right now,” Bridwell said. “Nobody is selfish on the team. We don’t care about stats. Whoever is on that night is on and we give them the ball.”

Pulver said it was a matter of too many open looks.

“We really fell apart with our pressure on the defensive end. We sagged a little too much and gave them too much room to navigate,” he said. “When they had that room, they were knocking it down. They are a catch-and-shoot team and they run a lot of inside cuts and a lot of passes to each other, and they’re very good at it. They’re very crisp, very polished. We got away from the stuff we started with and we’ve got to remedy it.”

Losers of four straight, RCHS will travel to Lafayette Central Catholic on Jan. 9. The Bombers are in the midst of a tough stretch that also includes games against West Lafayette (Jan. 15) and Kouts (Jan. 16).