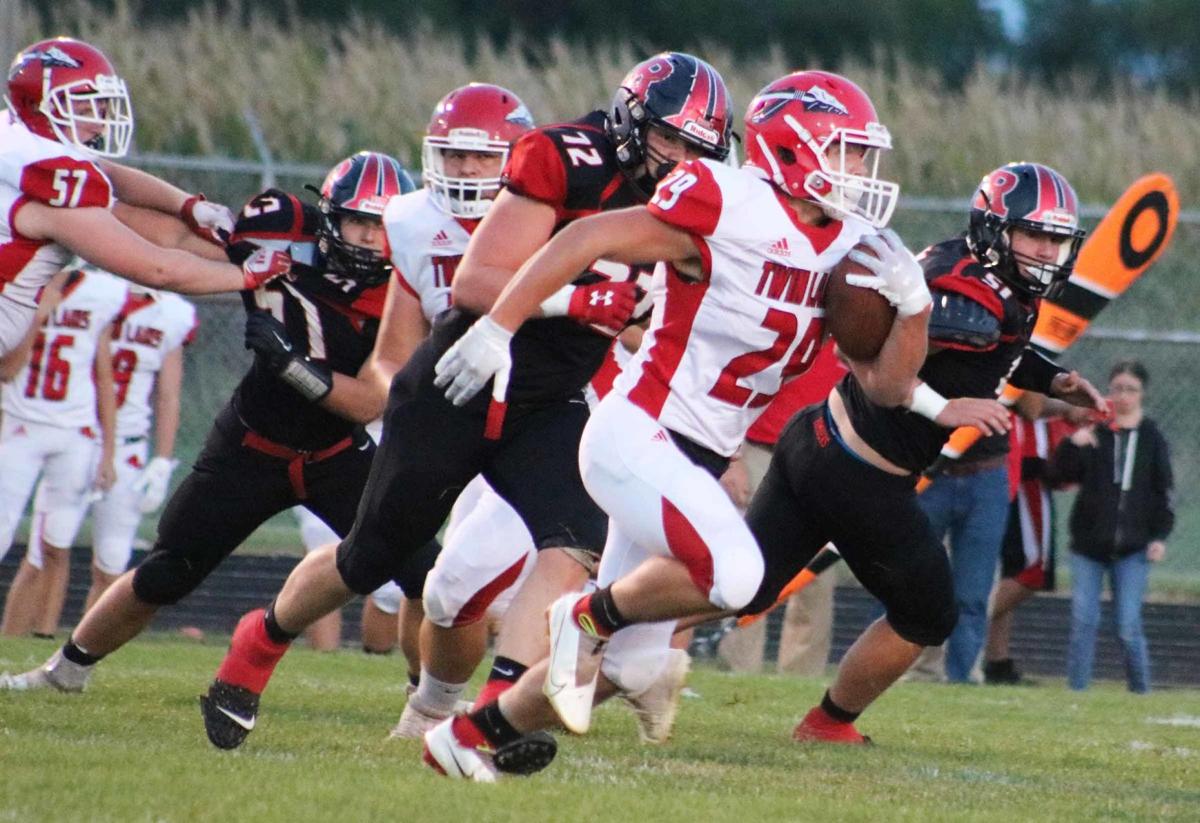 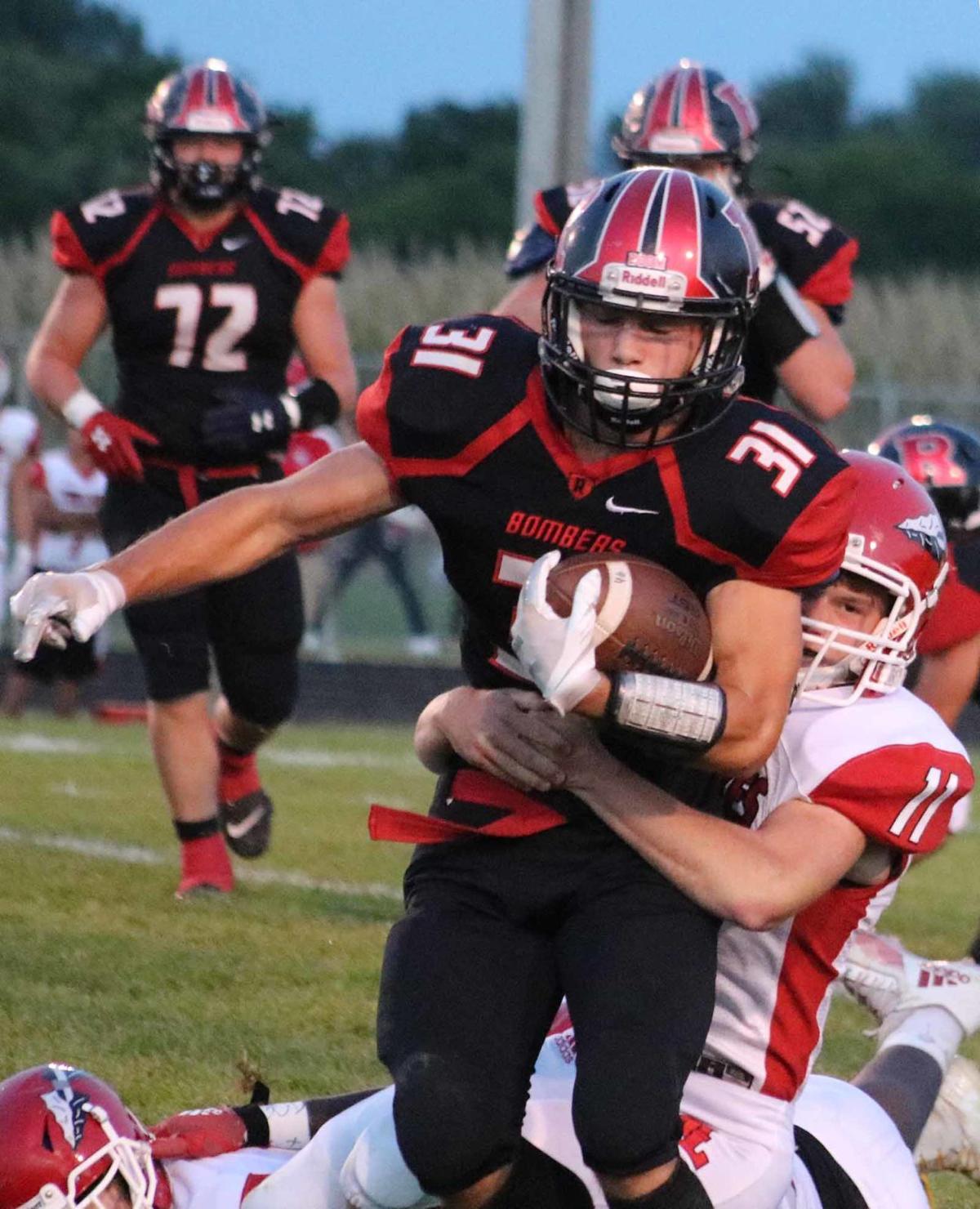 RENSSELAER — Nothing was going to budge Rensselaer Central from its game plan Friday.

Though Twin Lakes defended RCHS’s offense well — holding the hosts to a first-half touchdown on four offensive possessions — the Bombers came out of the locker room at halftime a more determined bunch in capturing a 30-0 Hoosier Conference victory at the Harrison Sports Complex.

It was classic, smash-mouth football from Rensselaer’s first possession of the second half. The Bombers, who went into halftime holding a slim 7- lead, engineered a 15-play scoring drive that featured nary a pass play.

Dalton Kidd had a pair of double-digit runs of 16 and 11 yards during the drive, which included mostly smaller runs of one to seven yards. Finally on play 15 with 4:32 left in the third period, Kidd crashed into the Indians’ defense for a 1-yard touchdown run to give his team a two-touchdown lead.

The Bombers scored two more times in the second half, including a Kidd 32-yard scamper for a score with 10:33 left in the game. Kelton Hesson’s 2-point run gave Rensselaer a 22-0 lead.

The Bombers took immediate control of the ball seconds later after Craig banged the ball off an Indian player on his kick-off. The ball caromed hard into a slew of Bomber players, with Luke Janek recovering the loose ball.

Rensselaer needed just six plays on its final scoring drive of the night, getting a 31-yard run from Hesson with 7:52 left to put the Bombers ahead 28-0. Senior quarterback Tate Drone’s 2-point pass to Logan Kuiper accounted for the final points of the night.

The Bombers had 348 yards on 56 running plays against Twin Lakes, which lost for the third straight game to fall to 1-3 overall.

The Indians kept pace in the first half with RCHS by plugging gaps with bodies, particularly senior lineman Brandon Franscoviak. The only touchdown in the first half came Rensselaer’s second possession in the first quarter when Kidd capped an 11-play drive with an 8-yard TD run.

Hesson had 44 rushing yards and Kidd added 38 during a drive that ate up over five minutes.

The Bombers had two other first-half drives that featured eight and 11 plays, but the Indians’ defense stopped both scoring threats.

“Our defensive line played outstanding,” said Indians coach Kevin Sayler. “Brandon Franscoviak and Kayvion Jackson have been our bell cows up there all year. Ethan Bowsman at insider linebacker and Kaeden Dishon at outside backer made a lot plays along with Carson Kelley. Those guys played their butts off.”

The Indians had three turnovers and a change of possession on a kick-off, with junior quarterback Jaden Franceschina throwing a pair of interceptions. Both balls found the hands of sophomore Aaron Barko.

Twin Lakes also had a fumble on its first possession of the second half when it appeared it was heading in for a score.

“We put ourselves in position to be in the game and just couldn’t find a way to get it done,” Sayler said. “That’s something we’ve got to clean up.”

Still, Sayler saw some positives in his team’s play. It was the Indians’ third straight game against a ranked opponent.

“Last week (against Tipton), we let one mistake kind of snowball, but this week we didn’t do that,” the second-year coach said. “We played a lot harder. We’ve played three good football teams in a row in two, three and four-A. We’ve just got to be a little more consistent in our run game and pass game.

“We’ve just got to finish drives. That’s the bottom line. We moved the ball a whole bunch tonight and we find a way not to finish the drive. That’s something that’s got to get fixed.”

Franceschina completed 6 of 18 passes for 69 yards. Junior teammate Jacob Oliver gained 93 yards on 22 carries and the Indians had 142 rushing yards as a team.

Oliver was the featured back due to injuries to a couple of key players, Sayler said.

“He had been running for us in the past. He came into the New Prairie game (in week two) and ran the ball pretty well. Last week, he played more at receiver, but this week, we knew going into it with an injury that he was going to be our guy there. He ran well,” Sayler said.

The Indians will return home to play winless Benton Central (0-2) for their homecoming. The Bison haven’t played in two weeks due to COVID issues with other teams.