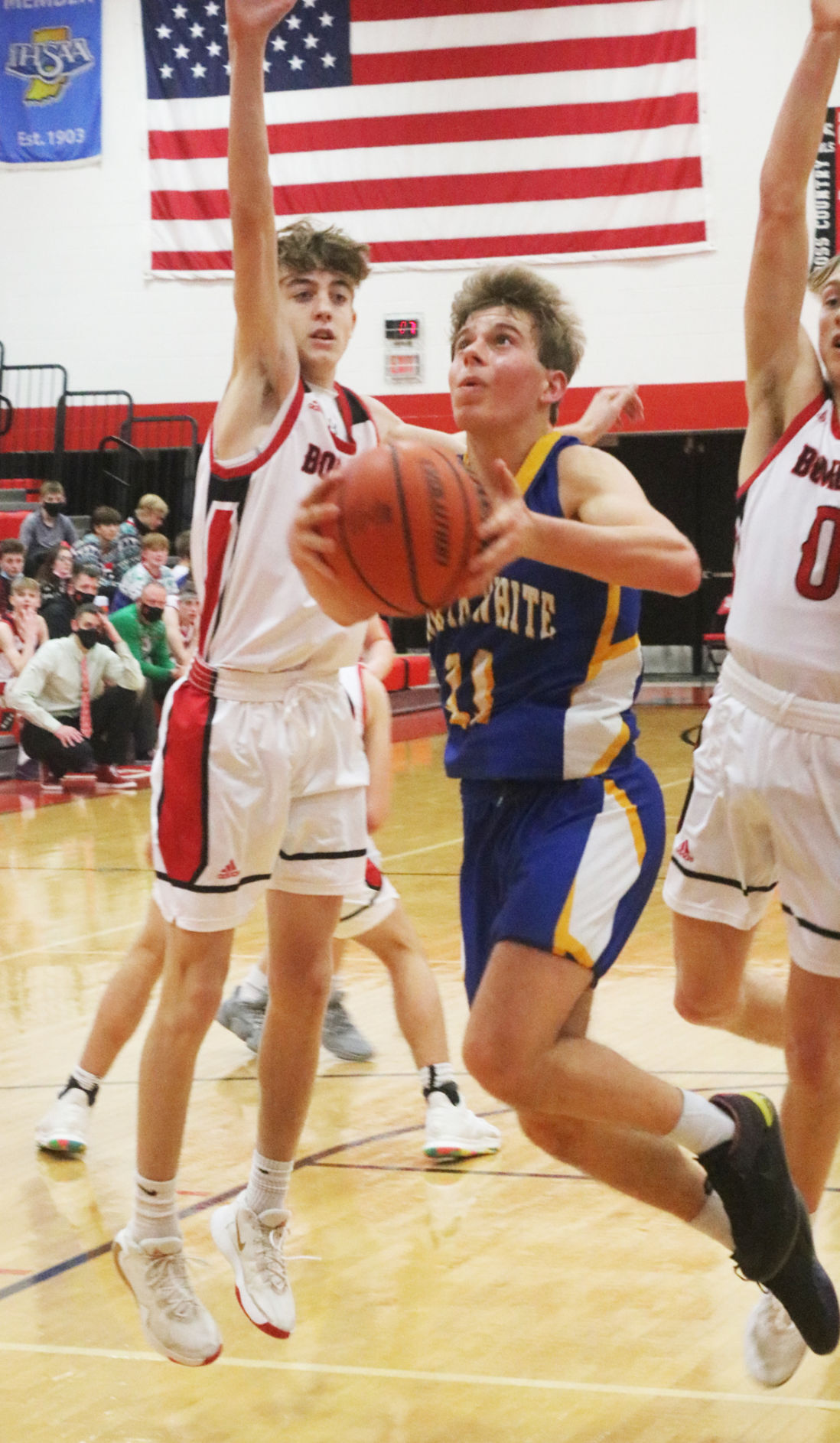 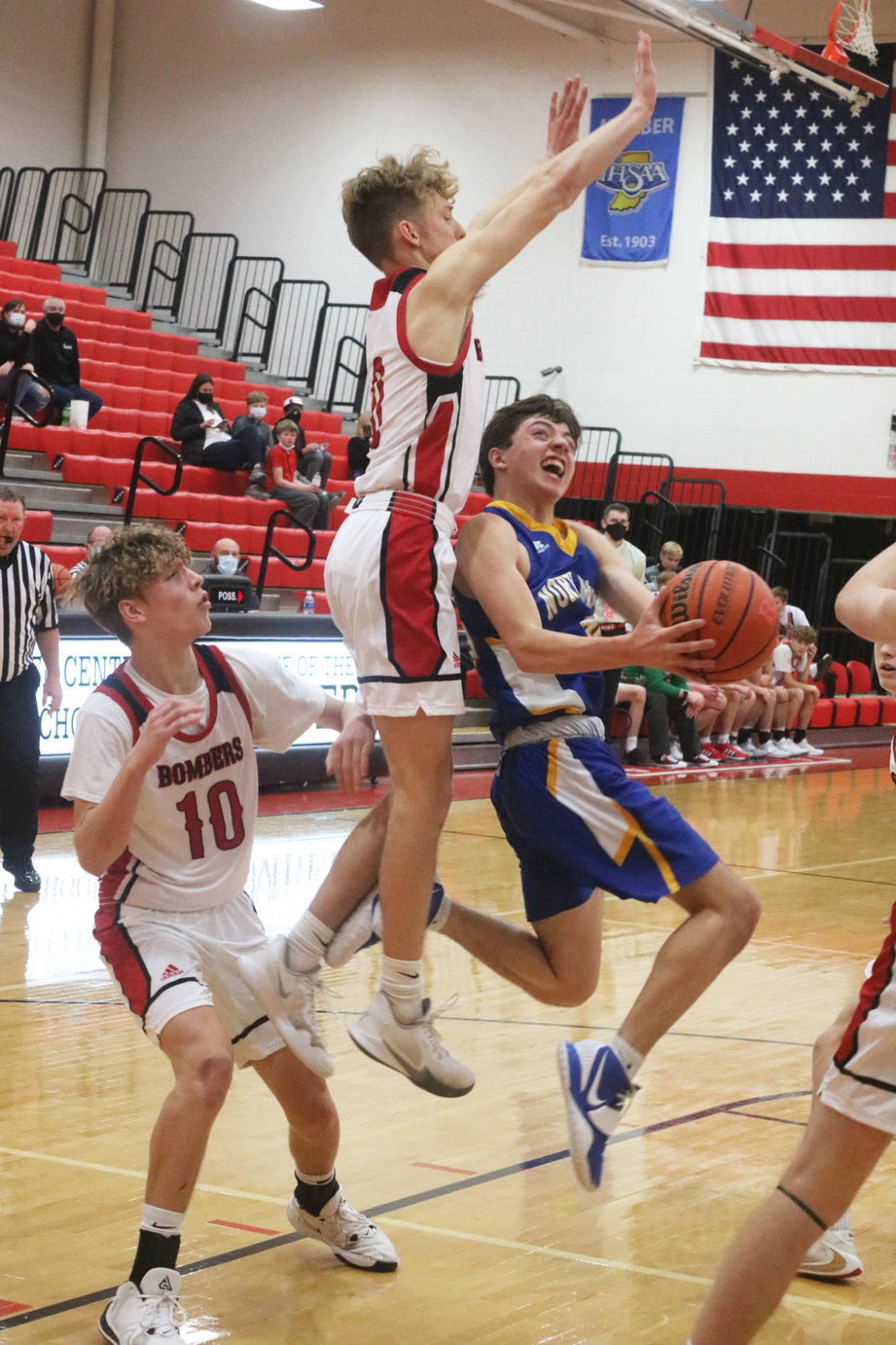 Once perfected in practice, it’s a good weapon to have when you want to get off a shot with time winding down.

On Wednesday night, North White shot-maker Hunter Pogue used a jab step to get separation from his defender, leaned back on his left foot and fired up a shot with just a couple of ticks left on the clock. His shot hit nothing but net at the buzzer, giving the Vikings a thrilling 64-62 victory over Rensselaer Central at Joe Burvan Gymnasium.

Pogue’s basket came just seconds after Bomber senior Josh Fleming buried a 3-pointer from the baseline with 39.4 seconds left to tie the game at 62-62.

North White senior Brayden Buschman looked to answer Fleming’s basket with a 3-pointer of his own, but the shot hit hard off the rim and into Buschman’s hands with 18.7 seconds showing. That gave the Vikings (3-1) plenty of time to set up a play for their quick guards.

“Most games, we think 10 seconds is a slow possession the way we play, so 18.7 left, we just wanted to peel off, peel off and get the ball in our guard’s hand and back out,” Vikings coach Matt Sipkema said. “We talk about team a lot, and in that last possession, four guys touched the ball, no one did too much, and make or miss, we left Rensselaer with nothing. From a coaching standpoint, it’s the maturity of the boys growing up. Every time we set something up, the boys executed really well. That’s what we’re going to have to do going forward is execute at the end of games and we did that.”

North White’s three guards — Pogue and fellow juniors Nate Miller and Bentley Buschman — weaved in and out with the ball to put the Bombers back on their heels in the final seconds.

“We were trying to get the ball in and get a good shot and just make sure they didn’t get an opportunity to score,” Pogue said. “We did a perfect job. Everybody did what they were supposed to do. We did a good job moving the ball around and we got the best shot we could get, I believe. It was a great team effort.”

“We actually played really well defensively and then we had a long rebound and three guys turn and not go after the ball, which gave them a second chance,” he said. “And No. 11 is a good player. It came down to one possession. He’s good at the step-back. He got a little bit of space and he hit a good shot.”

Pogue finished with a game-high 25 points, hitting 8 of 14 shots from two-point range. He did miss all six of his 3-point tries.

However, he took just one 3-point shot in the second half after deciding to attack the basket more.

“I thought in the first half, he fell in love with the three too much,” Sipkema said of his point guard. “That’s what he’s done in the past. I said, ‘You shot five threes in the first half. You haven’t shot five in the first three games. Get back to your mid-range.’ He had 22 against Hebron and they were all mid-range.

“The boy works on those moves non-stop in practice. You know it’s coming, but it’s hard to guard that step-back.”

It’s only three games into the season for the Vikings, but Pogue is hoping to find his 3-point shot sooner rather than later.

“Most of the season, I’ve been struggling to hit threes and I’m just waiting for that break-through game where I hit them,” he said. “I shot a few that I thought were going in, but they wouldn’t drop. I just said, all right, I need to get the best shot I can get for the team here. I knew shooting a three isn’t what we needed there.”

The Vikings, who last played Dec. 12, had a pair of seven-point leads in the second half, but the Bombers kept coming back. North White opened the fourth quarter with a 5-0 run to take a 53-46 lead before RCHS — which last played on Nov. 27 at Tri-County — outscored the visitors, 8-2, to pull within 55-54.

Colby Chapman and Fleming had baskets and Brody Chamness scored twice inside to get the Bombers within striking distance.

The Vikings, however, surged ahead again, taking a 60-54 lead on baskets by Pogue and Miller. They were up 64-61 with under a minute remaining before Fleming’s 3-pointer tied it up.

He added a game-high 12 rebounds.

“We said we’re going to run two guys at Fleming — it’s called it a blitz — and whoever comes off of that we’re going to live and die with that,” Sipkema said. “Credit Rensselaer, they put (Tate) Drone in the pick-and-roll and he got a couple of threes off of that. When Drone hit those threes, we tweaked it a little bit, but Fleming’s a heck of a player.”

Drone added 13 points, Chapman had 11 and Chamness finished with 10. Drone knocked down three 3-pointers, including two in the third quarter when North White retook the lead.

Jacoby Tiede-Souza had four assists and Chapman had three steals and three assists.

The Bombers actually held a nine-point lead in the second period (25-16) before foul trouble and stamina took key players off the floor. RCHS turned to its bench during a three-minute stretch of the second quarter, with Fleming the only starter still on the floor.

That lineup was able to help the Bombers maintain a 31-30 lead at halftime.

“We had 23 rebounds at halftime and 14 free throws. We’re shooting 22 percent and down by one,” Sipkema said of the first half. “I just told my boys even if we hit 30 percent we’re in good shape. At halftime, I was disappointed we gave up too many rebounds, especially on the weak side and we practice that like crazy. We just went back to our natural spread in the second half and we just have quick guards. They can’t keep in front of us. That’s our strength.”

The Vikings rallied behind Miller, who was 0 for 5 in the first half but hit 3 of 4 3-point shots in the second half and finished with 13 points.

Pogue said he saw his teammate improve his shot in the preseason.

“We got in the gym in the summer and worked on our shots every day,” he said. “He’s put up a lot of shots and he’s gotten a lot better. He came alive in the second half, and he’s the one that boosted us to the win, I believe.”

Bentley Buschman had 15 points and Brayden Buschman had eight rebounds. Pogue, the smallest player on the floor at 5-foot-8, had 11 rebounds.

With the score tied at 14-14 in the first quarter, the Bombers got a 3-pointer from Fleming for a 17-14 lead. They then hit three straight shots, including two by Drone, for a 23-14 lead.

The Vikings held the lead for most of the second half. The Bombers did manage to tie the game twice in the fourth quarter.

North White will next play in the Edinburgh Tournament for the second straight year. The Vikings will face Indianapolis Lutheran (3-2) in game one on Monday, Dec. 28, and will play either South Putnam or Edinburgh in the second game on Tuesday.

Periods of snow during the morning will transition to a wintry mix in the afternoon. Temps nearly steady in the low to mid 30s. Winds ENE at 15 to 25 mph. Chance of precip 90%. 1 to 3 inches of snow and ice expected.