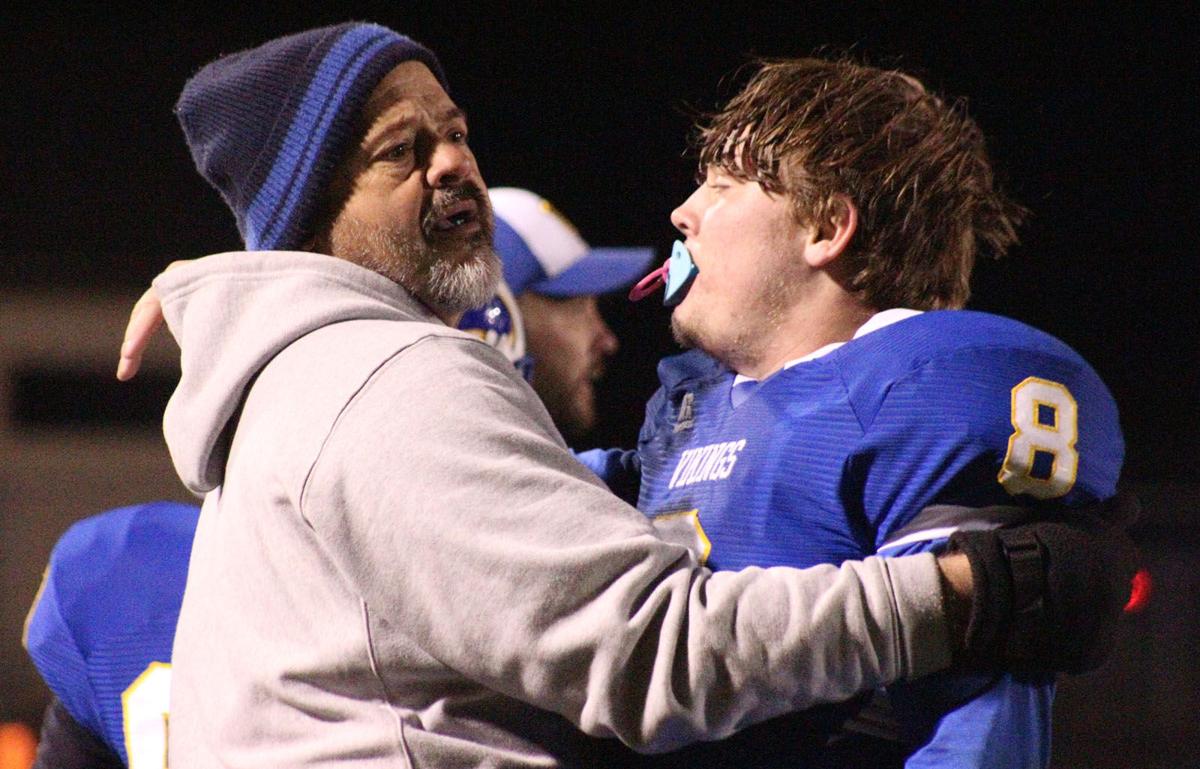 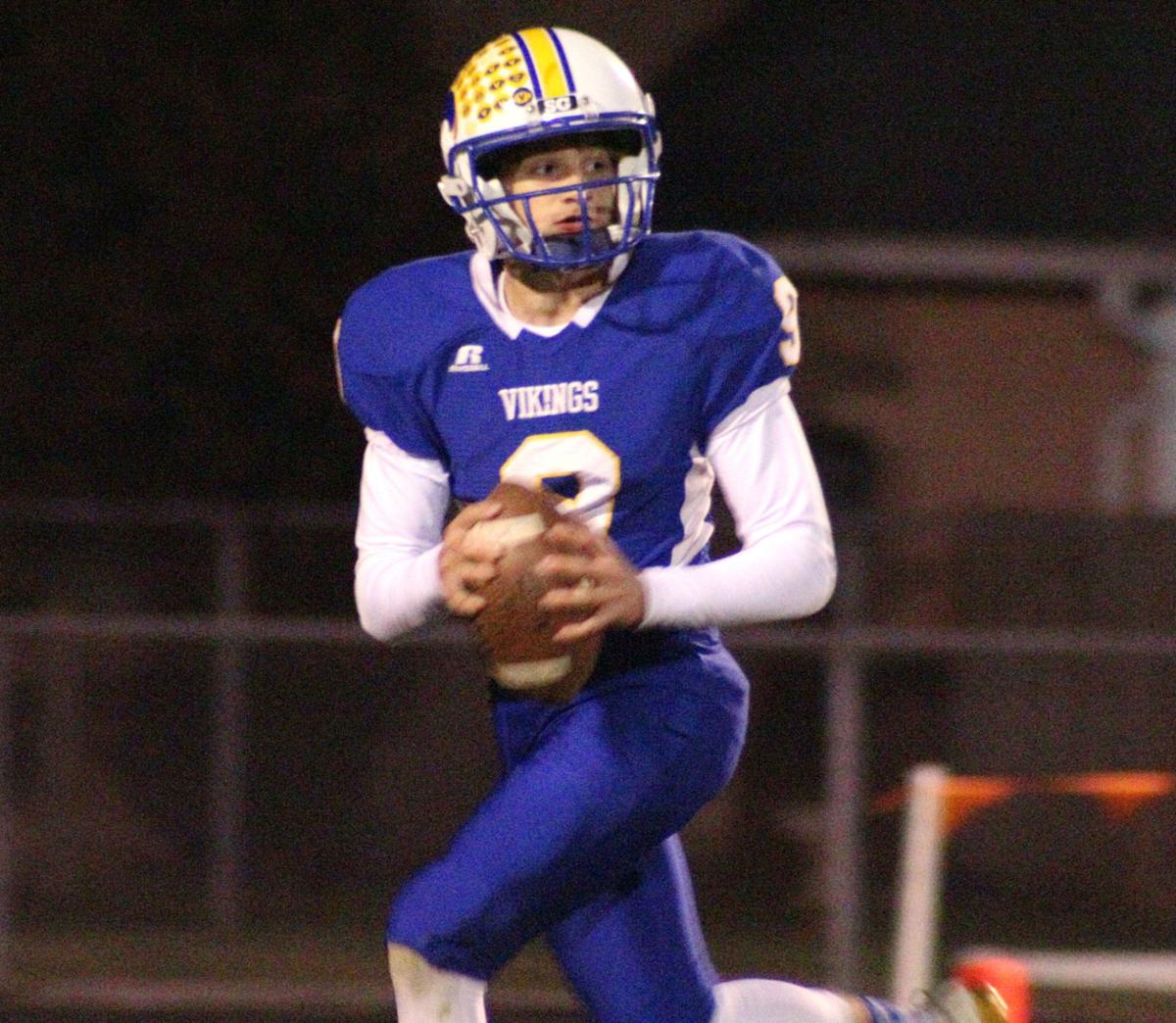 North White's Eli Quasbarth looks for a receiver downfield during a Midwest Conference game against West Central on Friday in Monon. 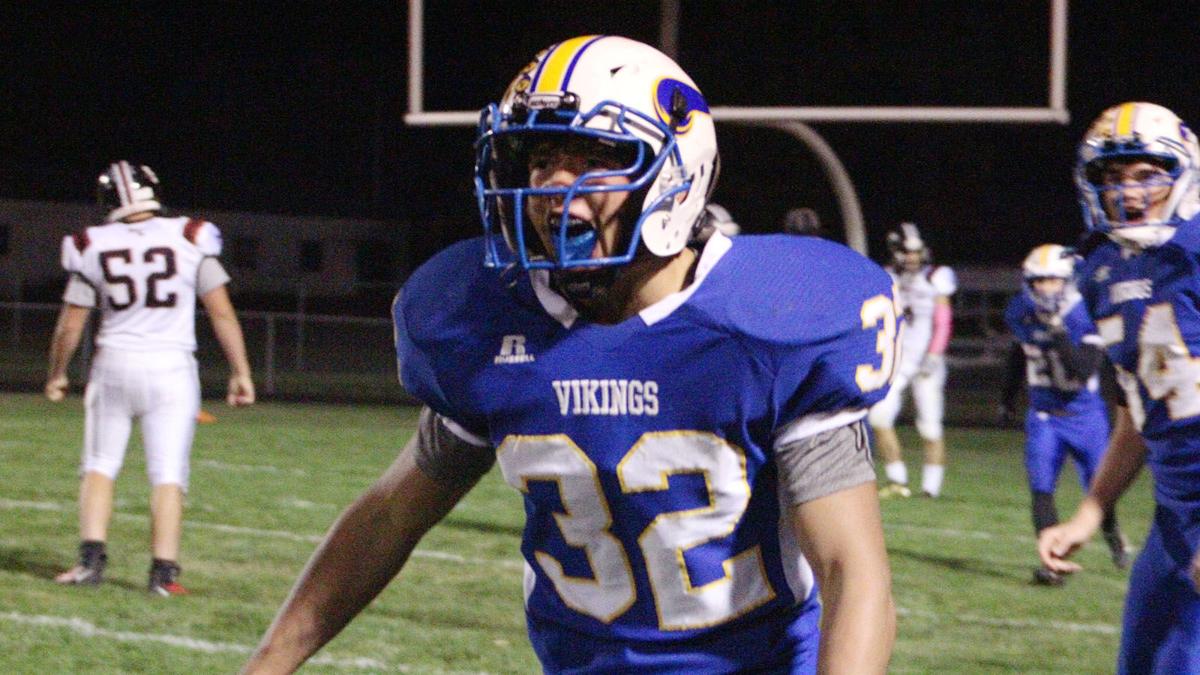 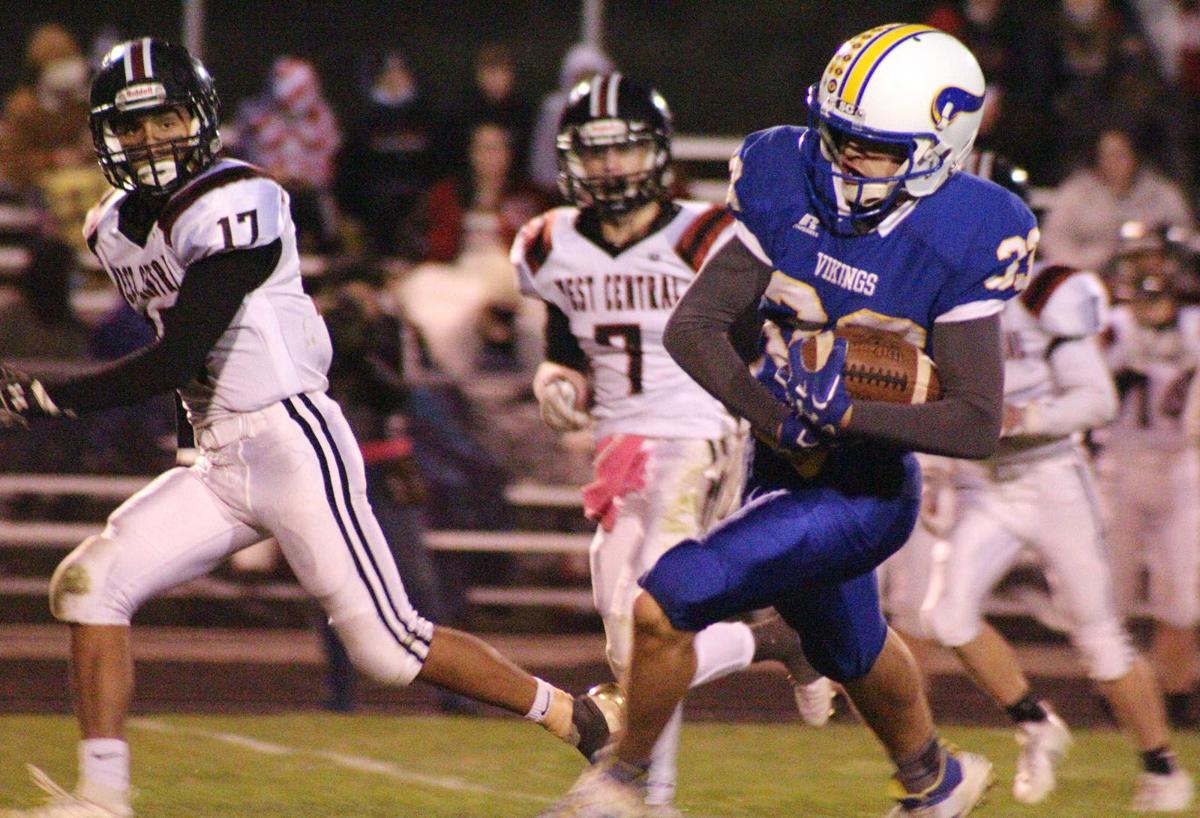 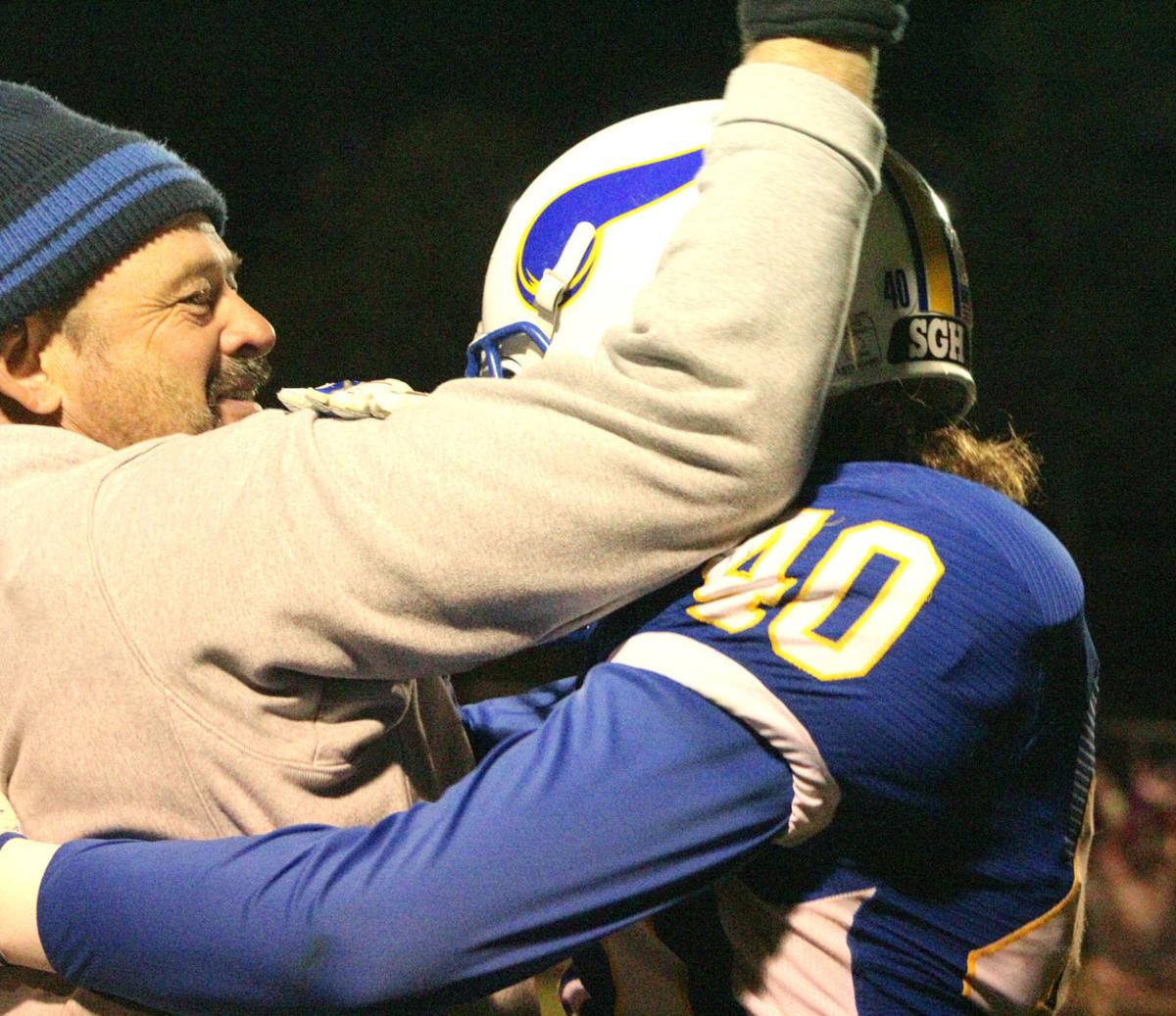 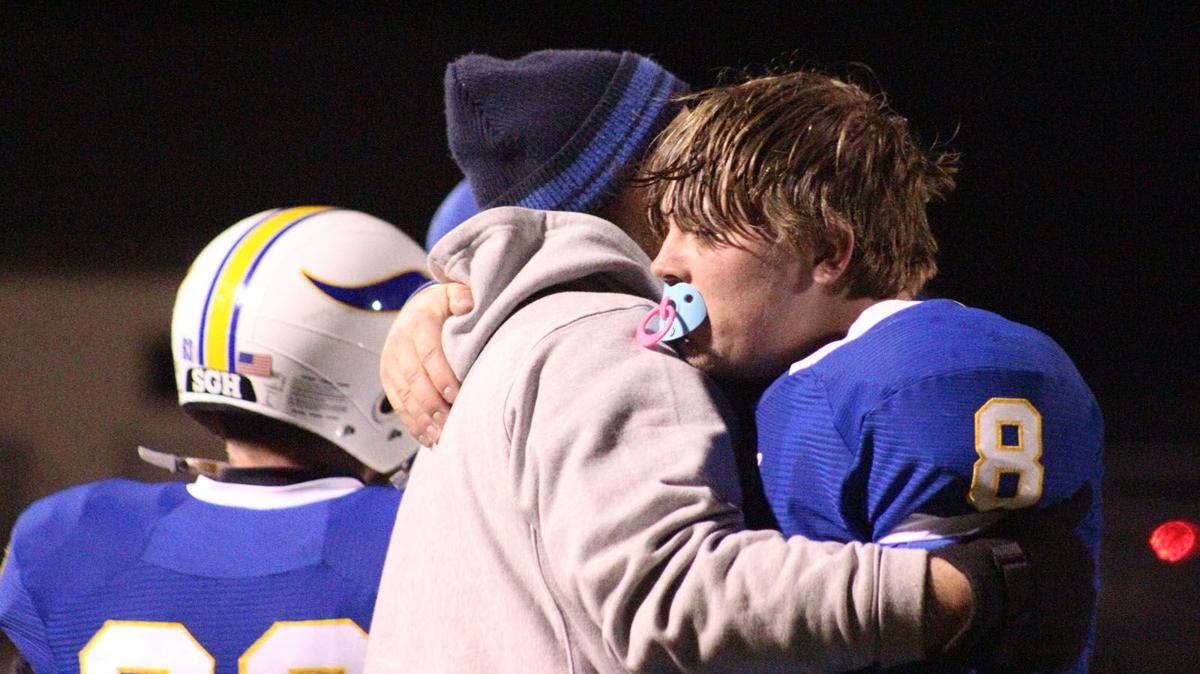 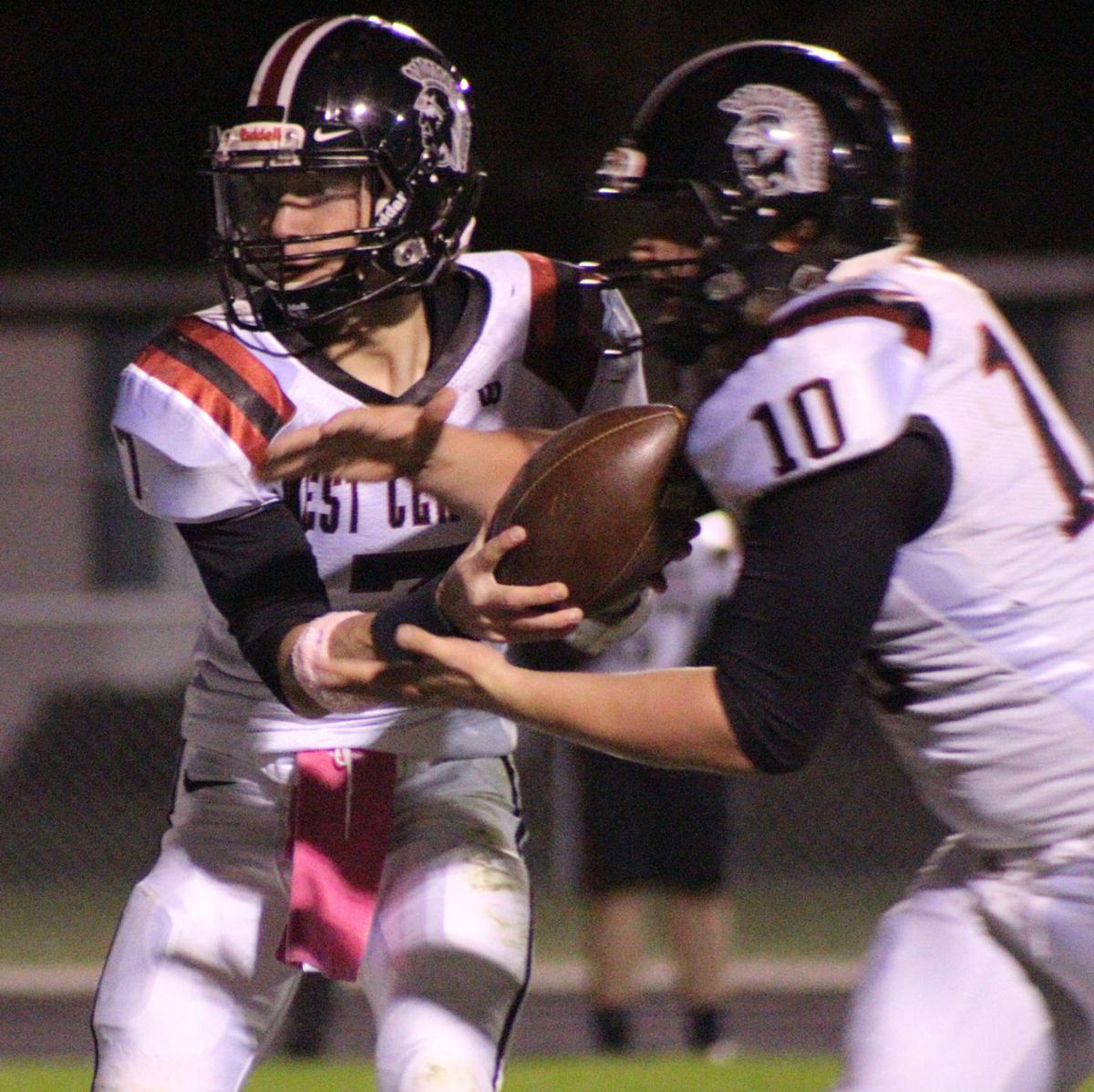 West Central's Garrett Leman hands off to Kolten Kletz during a Midwest Conference game against North White on Friday in Monon.

North White's Eli Quasbarth looks for a receiver downfield during a Midwest Conference game against West Central on Friday in Monon.

West Central's Garrett Leman hands off to Kolten Kletz during a Midwest Conference game against North White on Friday in Monon.

MONON — First, it was Parker Smith flying into the picture to drill Blayden Huber and drop him short of the goal line.

Later, it was a pair of tackles for loss sandwiched between two pass breakups.

When it absolutely had to make stops, North White’s defense did.

Because of that, the Vikings earned themselves a third Midwest Conference victory and the designation of conference runner-up after a 30-24 overtime victory against West Central.

“It was nerve-wracking, but I think the team knew we could stop it,” senior back Cade Garrett said. “We just pursued and read it. They ran the same plays all night; it was just different formations. We read them real well and we just picked up on it at the end. Figured them out, made stops.”

North White (3-5, 3-2 Midwest) finished a game and a half behind North Newton (4-4, 4-0) and a half game ahead of fellow White County schools Frontier (5-3, 2-2) and Tri-County (2-4, 2-2). Frontier was supposed to face South Newton, while North Newton was supposed to face Tri-County. Because of COVID-19 related cases for both school systems, those games were cancelled.

“It was a team effort, up and down, across the board,” head coach Kirk Quasebarth said. “I’m happy for the seniors, and you can’t ask any more out of a lot of those freshmen I have playing. They’ve really grown up and came a long way this year.”

With the score tied at 24, West Central (2-7, 2-3) retained possession after the Vikings punted the ball from the Trojans’ 34-yard line. Zack Sloan’s corner-coffin punt settled at the 5-yard line, but West Central drove close to 95 yards in three and a half minutes.

On second-and-goal from the North White 2-yard line and five seconds on the clock, the Trojans ran a jet sweep pass for Huber. Huber previously gashed the Vikings a few times on the same play. As he made the cut upfield at the hashmark and turned to juke Eli Quasebarth, Smith threw his entire body at the Trojan and leveled Huber, bringing him down at the point of contact a half-yard behind the line of scrimmage to end regulation.

“We knew I was coming up to stop the motion and I just made the play,” the sophomore defensive back said. “That was a good call on the defensive coordinator, telling me to come up.

“That was a hard hit. I’m glad he went to the ground and didn’t get back up.”

The Vikings had possession and scored first in overtime, with Eli plunging in from 1-yard out for a 30-24 lead. The 2-point conversion failed.

West Central’s first play from the 10-yard line resulted in Andrew Ball slowing Trojans quarterback Garrett Leman behind the line and the rest of the Vikings cleaning it up for a 2yard loss.

On second down, CJ Hunt almost had Leman for a loss of yardage, but Leman escaped. His pass into the end zone was broken up.

On third down, Garrett dropped Leman for a loss of four yards, sending the Vikings’ sideline and home crowd into a frenzy. The entire defensive line broke through and pressured Leman on fourth down, forcing him to throw on the run into the corner of the end zone.

Eli broke up the pass, handing victory — and extreme euphoria — to the host team.

“We kept fighting. West Central kept fighting,” Garrett said. “It was a great game between both teams. It came down to the final play. It’s just defense — defense wins games. That’s the best defense I’ve seen from us.”

Quasebarth accrued his first touchdown of the game three minutes into the first quarter, finding classmate Kade DeBoard for a 42-yard touchdown and a 6-0 lead after the extra point kick failed.

It took until just past two and a half minutes into the second for the Trojans to answer, with Kolten Kletz barreling in from a yard out. Leman ran in the 2-point conversion for an 8-6 edge.

North White regained the lead with a little more than three minutes before halftime. As Eli Quasebarth was flushed out of the pocket and scrambling to his right on fourth-and-1, threw his arm up as he continued downfield.

Quasebarth’s pass was a little short, but Garrett reached over West Central defensive back Ayden White and plucked the ball away. The pair landed on their feet, and Garrett pushed away from White, turned and bolted the rest of the way up the sideline for a 60-yard touchdown and a 12-8 lead.

The Vikings added another Quasebarth 50-plus-yard passing touchdown early in the third quarter as he found DeBoard for a 51-yard score. Like, Garrett, DeBoard won the jump ball, turned and ran 30 yards the rest of the way nearly unimpeded.

Facing a 10-point deficit, West Central answered. First came a safety in which Quasebarth was brought down in the end zone. The ensuing Trojans drive tied it as Kletz ran in from 2 yards out and then added a 2-point conversion.

Brayden Buschman gave the home team a 24-18 lead on a 45-yard end around run, but the scoreboard was level after Braden Nuest’s 9-yard score in which he was stopped briefly in the backfield, but not tackled.

North White took three and a half minutes off the clock, but punted when it got to the Trojans’ 34-yard line to set up the endgame.

“We were not picked to be in this position we are right now,” Garrett said. “The freshmen have grown up a lot; we’ve had multiple freshmen play real well. Sophomores and juniors, they stepped up this year and came to play.

“They have heart. This team, this year, we have a lot of heart.”

Garrett had one sack and multiple tackles for loss; he also ran for four yards and caught two passes for 66. DeBoard caught two for 93.

“We knew it was going to be a battle. Both teams were pretty similar,” coach Quasebarth said. “Nobody thought about us. All you heard was about Frontier down south and Tri-County’s better. The Vikings were just going to be young and out of the picture.

“People counted us out and we ended up pulling out second place in the conference. That’s pretty darn good.”

A mix of clouds and sun in the morning followed by cloudy skies during the afternoon. High 52F. Winds ENE at 10 to 15 mph.