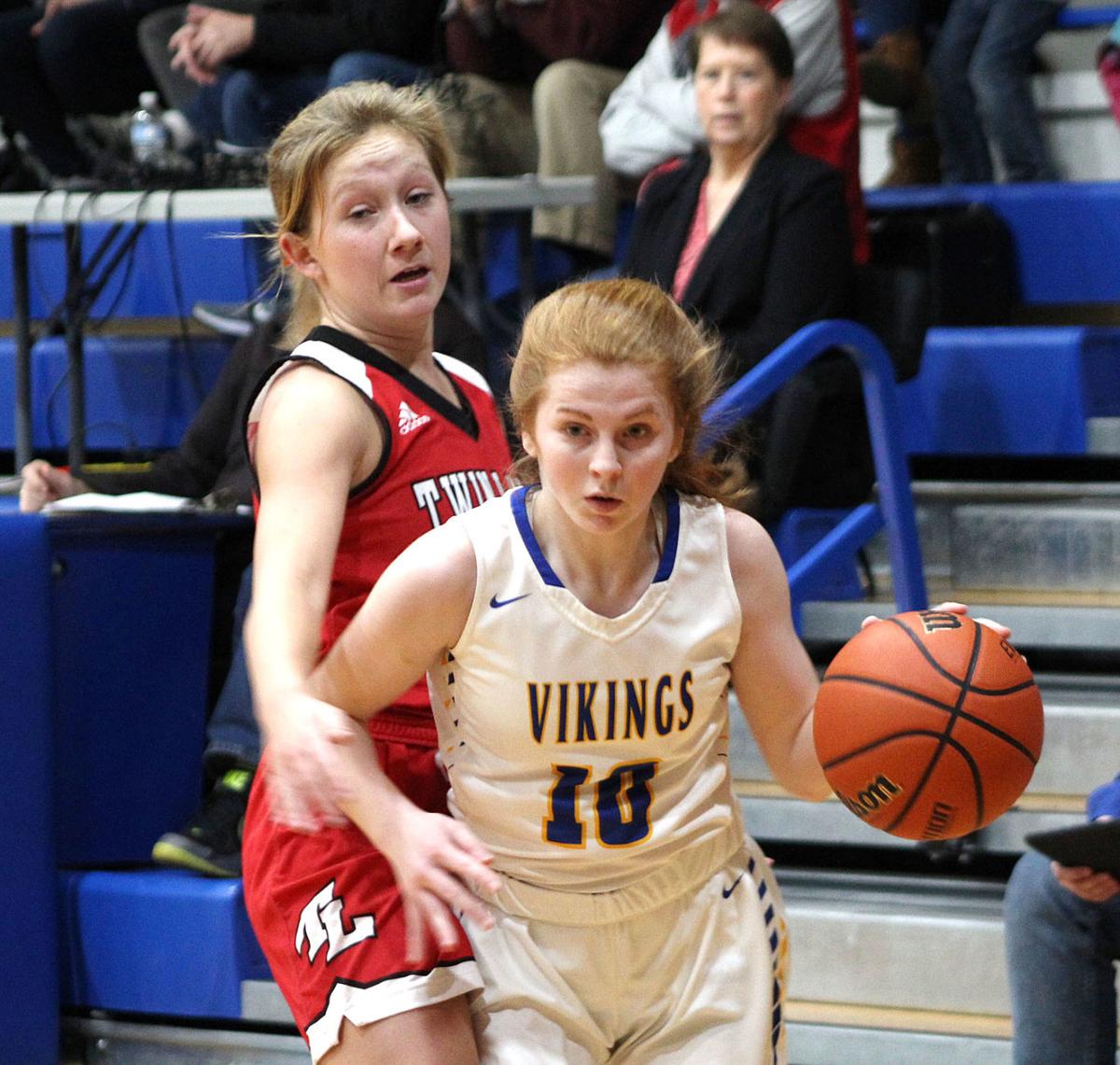 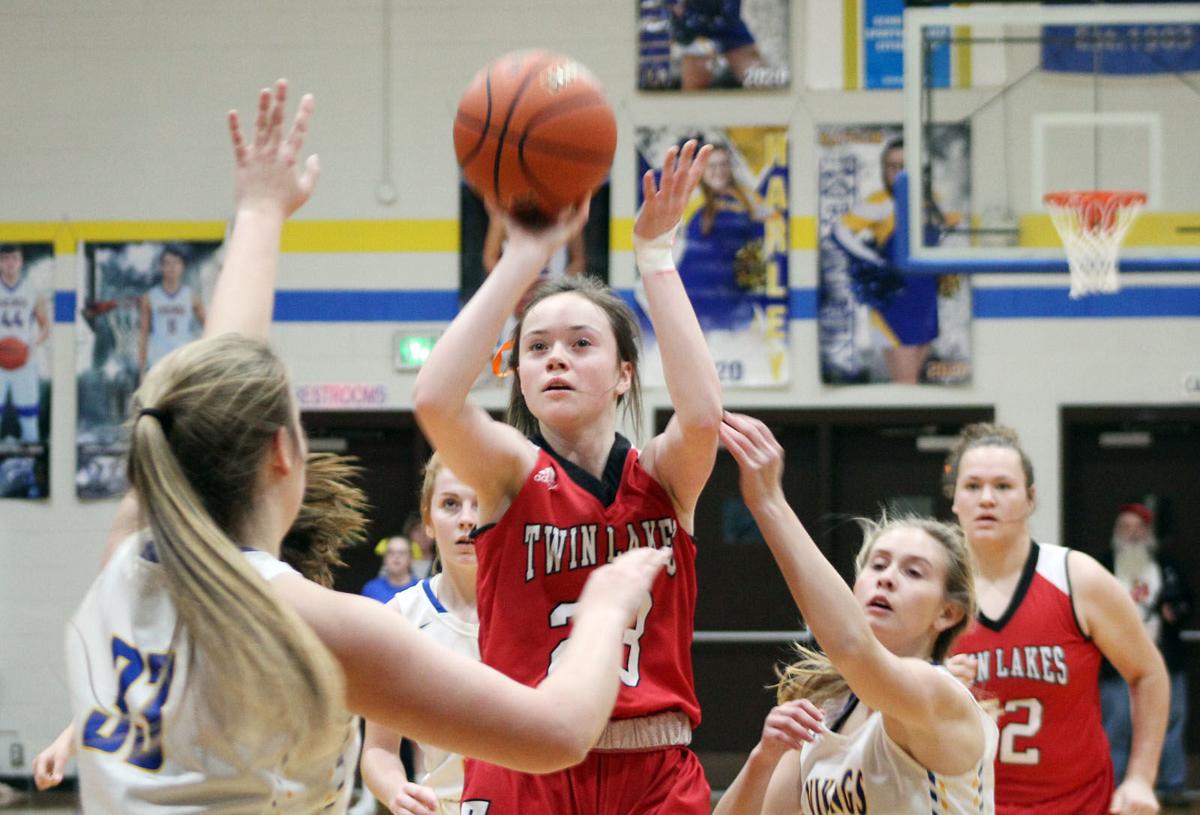 MONON — There’s a half-second of space.

It closed fast, but in that time North White freshman guard Abigale Spry flipped the ball toward the lane. She also flicked her wrist at the last possible instant.

The wrist movement sent the sphere toward an open spot close to the rim — and not right to Twin Lakes’ Evelyn Scharer, one of three Indians closing in.

No, it floated another direction — right to Lynzi Heimlich, who yelled “Abigale” and moved into the lane behind Scharer just before Spry released the ball. Heimlich caught the ball in motion and immediately tossed it off the backboard as time wound down.

It banked off the glass and through the net as the clock wound under two seconds. The clock continued to run, which gave Twin Lakes little to no time to inbound the ball for a counterattack. The Indians tossed the ball in with seven-tenths of a second showing, and the effort at a final shot was way off and way short.

Spry’s look and Heimlich’s shot allowed the Vikings to escape with a 41-39 overtime win.

“I was trying to get to the basket,” Spry said. “I saw two people doubling me, and I knew (the pass) was going to get hit out. It ended up in (Lynzi’s) hand. I kind of tried to pass it to her.”

Added Heimlich, “I knew there wasn’t a lot of time on the clock, so I just shot it. I was glad it went in.”

Spry came up big as North White (12-8) crawled back into the contest from seven down with 53.6 seconds left to force overtime. After the Vikings forced a turnover when Twin Lakes (8-11) was whistled for a five-second inbounds call, Heimlich set up under her own basket with 8.9 seconds left in regulation.

Spry darted into the lane after Olivia Allen ran through the lane parallel to the baseline, and Heimlich bounced the ball to Spry. The freshman got hold of the pass, dribbled once as a defender went past and tossed the ball off the glass for a 2-foot bank shot that went in with six seconds left for a 35-35 score.

Twin Lakes quickly inbounded the ball, with Addison Ward sprinting up court. Ward stepped into a 3-pointer and let go with roughly nine-tenths of a second left, but it was wide left at the buzzer.

Roughly 10 minutes after the win, North White head coach Bryan Heimlich’s hand shook ever so slightly as he tried to grab a sip of water and contemplate the proceedings.

“We did what we needed to. Obviously down the stretch, we hit some big shots,” the coach said. “The girls played hard. The last five minutes, they played hard.

“Give Twin Lakes. They played very well, very hard. It was a great battle between two young teams.”

“North White is very well-coached by Bryan, and their girls were prepared,” Bowsman said. “We were prepared, too. It was a dogfight until the end. We just couldn’t hold that seven-point lead.

“Not getting the inbounds in regulation was a huge problem we had. It’s disappointing to have that seven-point lead late and lose that.”

Coach Heimlich gave a lot of credit to Allen, whose 3-pointer with 8.9 seconds on the clock cut the Vikings’ regulation deficit to 35-33 and set up its defense to force the turnover. Later, she opened overtime with a basket for a 37-35 edge. Allen finished with a team-high 14, adding four rebounds, two assists and two steals.

“Liv hit the big 3 that cut it within two, then we got that big stop,” coach Heimlich said. “We needed a stop, and we got it. And we hit the shot, too, to put it into overtime. That was huge.”

Twin Lakes garnered its 33-26 lead with one of the game’s only extended runs over a four-minute stretch. Ward hit a 3-pointer with 5:17 left in regulation for a 28-25 score, and Hannah Hodgen found herself with an offensive rebound and an open putback for a 30-26 lead with 2:30 on the clock.

Later, Ward scored a layup and hit the accompanying free throw a little over a minute and a half later for the seven-point spread. She added a pair of foul shots for a 35-30 advantage with 19.7 seconds left in regulation, and scored 12 of her 18 points in the fourth quarter (10) and overtime (two).

“I’m happy with how Addi Ward played; she stepped up in that fourth quarter for us,” Bowsman said. “It’s a tough game to play when you’re playing friends on the other side, things like that. The girls came out and play hard.”

The contest’s final eight minutes was a far cry from its first 24, where the score heading into the fourth quarter was 22-21, North White. Much of that had to do with poor shooting — North White shot 38 percent overall (16 for 42), Twin Lakes shot 33 (13 for 39) — but another factor was that the teams mirrored each other well. Both rosters have some experience, but are loaded with underclassmen.

“We were supposed to comer out a little bit harder than that,” Lynzi said of the 6-5 and 14-13 first quarter and halftime scores. “But we didn’t play our best.”

“Both teams got back in transition pretty good, I thought, and setting up in halfcourt defense. And we both like to push the ball, the tempo, but couldn’t because of that,” coach Heimlich said. “Sometimes when you’re not making shots — the girls seemed tentative on both ends tonight. Both teams didn’t seem sure of how they wanted to attack, and that kind of dictated that (slower) pace of game.”

North White’s lone senior, Marissa Benitez, sank a layup for a 33-28 deficit in regulation, and Tessa Robertson put in another shot for a 33-30 score.

Ward sank two free throws for the five-point edge, but Allen responded to set other events in place.