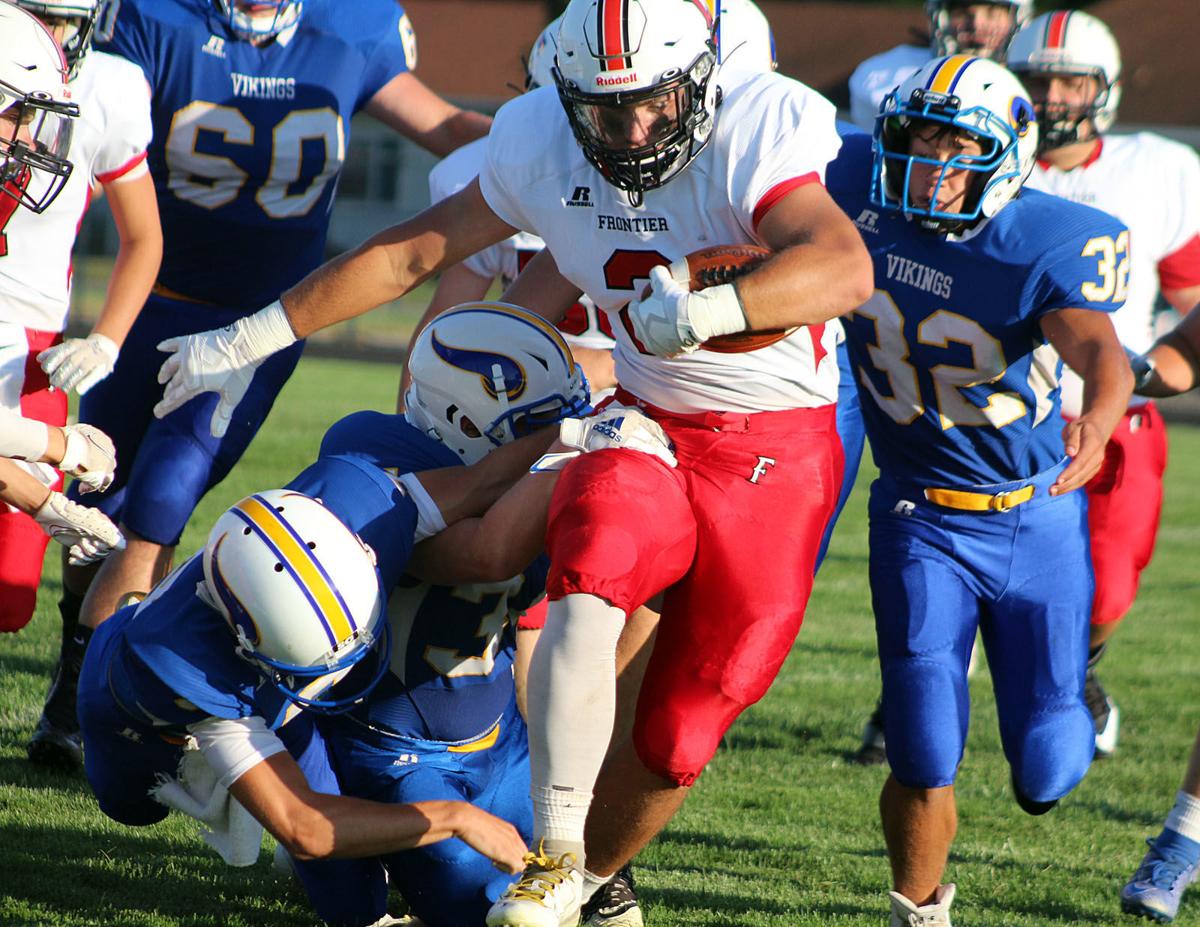 Frontier's Caleb Atkinson runs during a Midwest Conference game against North White on Friday in Monon. 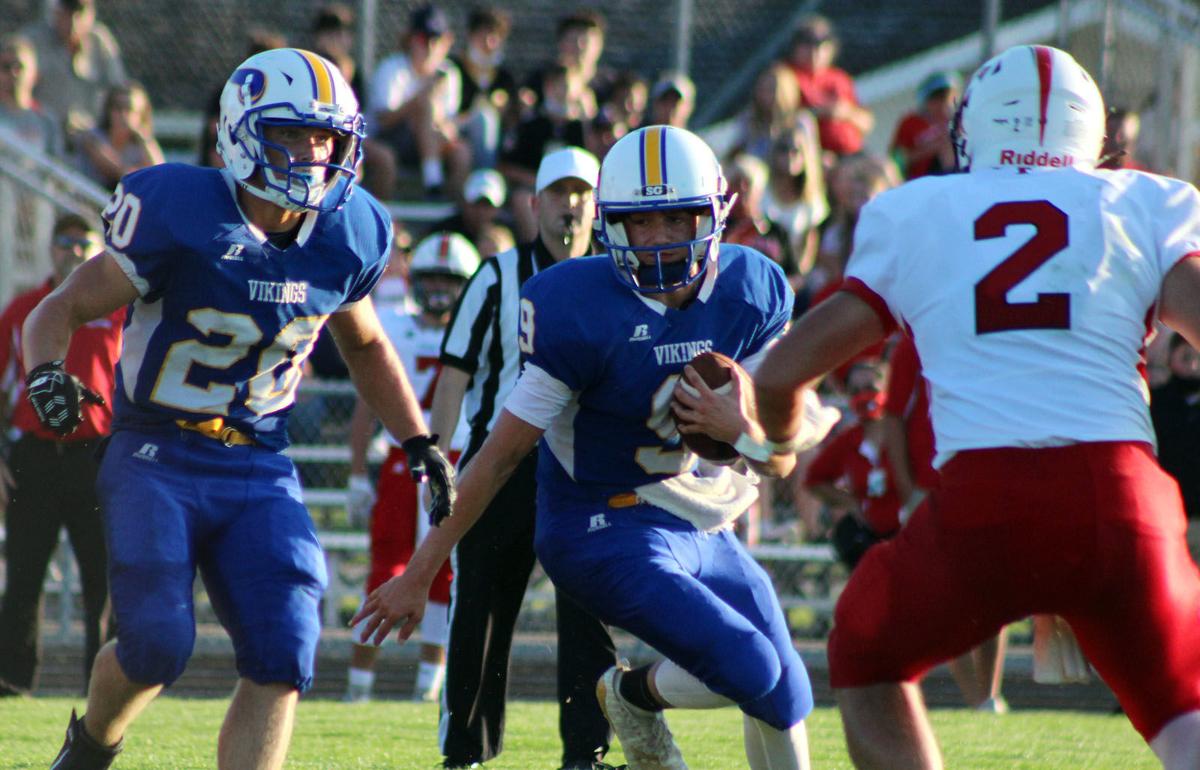 North White's Eli Quasebarth looks for room to run against Frontier on Friday in Monon. 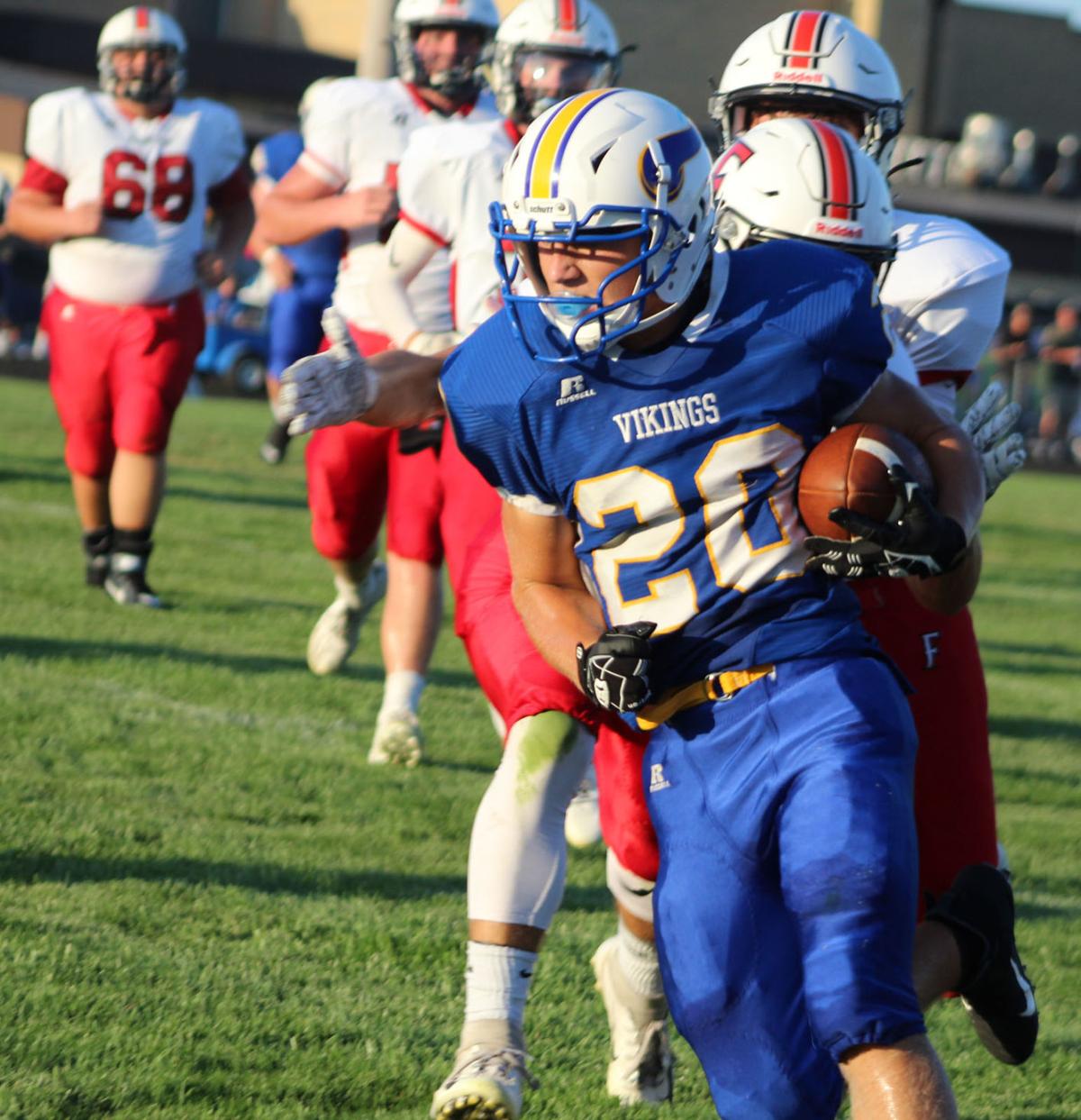 North White's Parker Smith runs during a Midwest Conference game against Frontier on Friday in Monon. 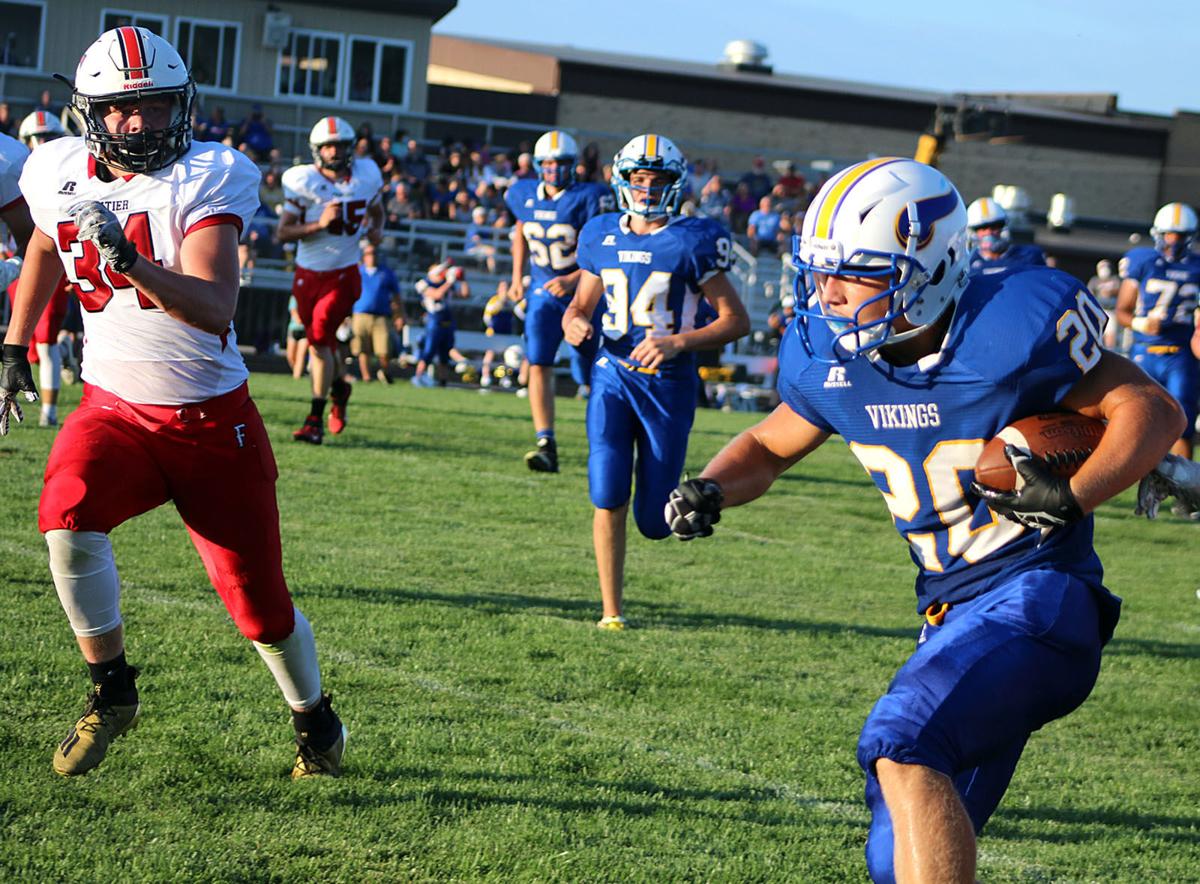 North White's Parker Smith runs for yardage against Frontier on Friday in Monon. 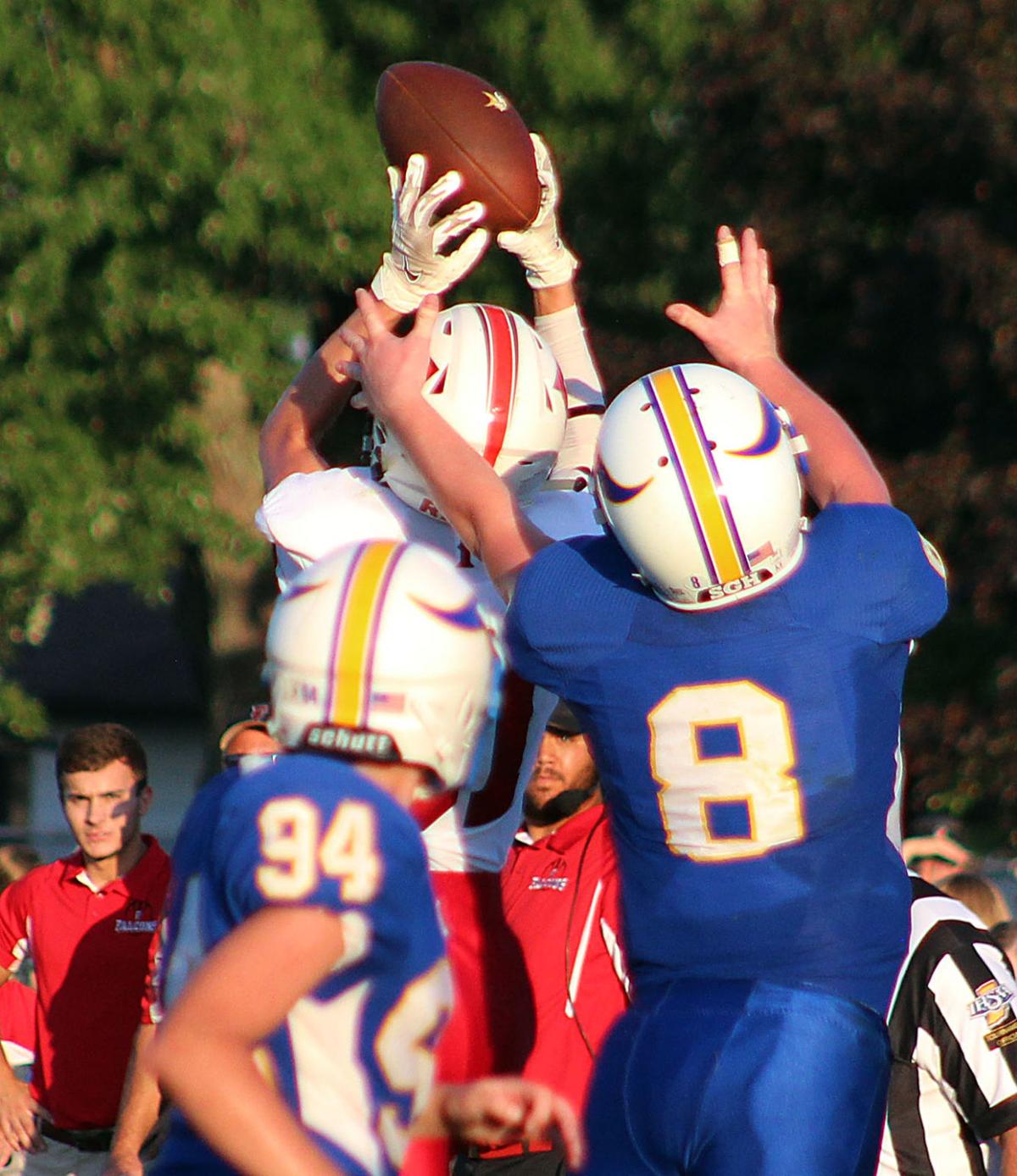 Frontier's Corbin Capes intercepts a pass against North White on Friday in Monon. 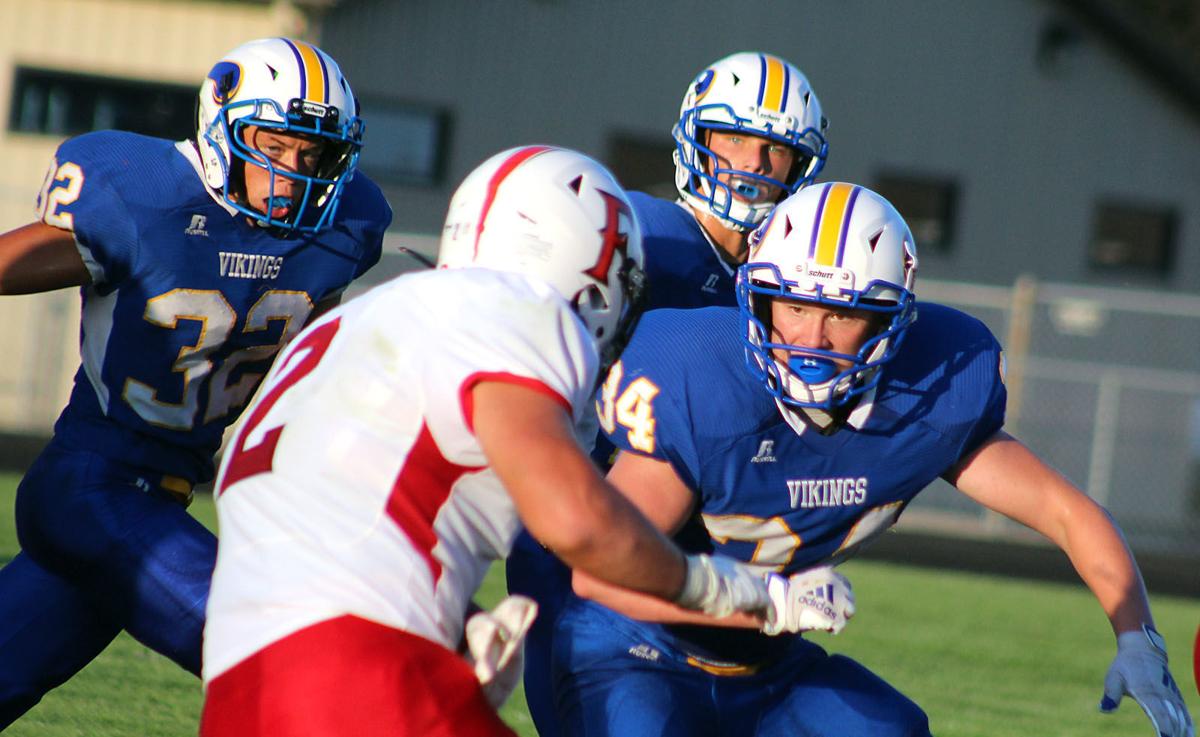 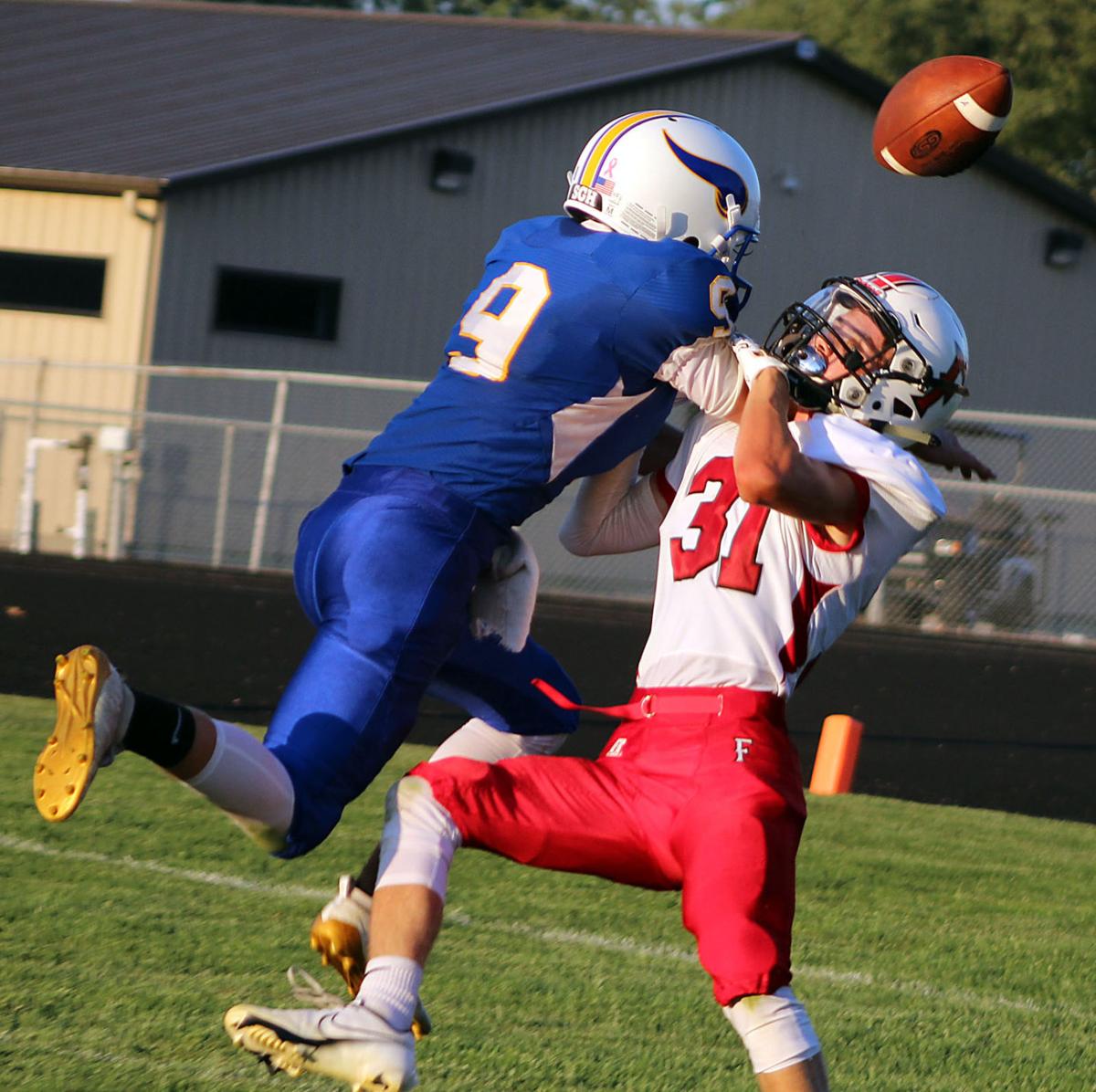 Frontier's Caleb Atkinson runs during a Midwest Conference game against North White on Friday in Monon.

North White's Eli Quasebarth looks for room to run against Frontier on Friday in Monon.

North White's Parker Smith runs during a Midwest Conference game against Frontier on Friday in Monon.

North White's Parker Smith runs for yardage against Frontier on Friday in Monon.

Frontier's Corbin Capes intercepts a pass against North White on Friday in Monon.

MONON — North White knew what it was in for against Frontier’s Caleb Atkinson.

The Falcons senior running back gashed the Vikings for 120 yards and a score last year, and piled up 206 in Week 1 victory. With a younger, smaller and more inexperienced team, North White head coach Kirk Quasebarth noted he pulled out all the stops in practice this week — even utilizing assistant coach Steve Hubbard as a stand-in for the 6-foot-2, 230-pound bull of a tailback.

Atkinson was hardly stopped again as the Falcons rolled to a 26-0 road and Midwest Conference shutout Friday. He ran 27 times for 206 yards and scored from four, eight and two yards out. He also added a 2-point conversion run and a 29-yard catch.

“We just have to keep rolling and make the little things count,” Atkinson said. “We have to clean it up a little more, and when we do that, we’ll be a great football team.”

Added classmate and lineman Nolan Mears, “It starts at home, starts on the field at practice. Our second half was a lot better, and we’re going to keep working and get better as the season goes.”

While Frontier (2-0, 1-0) didn’t come close to matching its 400-yard rush effort from the season opener, the Falcons still controlled the ball and clock for much of the evening to spoil North White’s Senior Night. Frontier ran for 236 yards on 39 carries, with Isaiah Davis putting the final score on the board during a 6-yard run seconds into the fourth quarter.

“I’m just happy,” Mears said. “I’m glad that we’re getting to play, and this is just great. It’s a great senior year, really.”

The Vikings (0-2, 0-1) allowed just 12-0 first-half points, but couldn’t muster up a lot of offense in response. Parker Smith ran for 80 yards — “and earned every one of them,” an assistant coach noted— but North White’s first-half drives ended in a turnover on downs, an interception and a punt.

The Vikings’ reached the Falcons’ 14-yard line on their opening drive, but freshman quarterback Eli Quasebarth was dropped for 6 yards on first down and North White gained only four back before turning it over on downs.

The home team’s next drive started on the Frontier 38, but only advanced 13 yards before Quasebarth threw an interception. No other Vikings drive breached the Frontier 35.

“When you play teams with a lot of experience … you’re going to expect that. We just have to keep growing and trying to get better,” Quasebarth said. “We’re in a youth movement, but I cannot say anything but (be) positive about my team.

“You take freshmen, and by sectional time you make them sophomores. You make sophomores juniors, and roll that into as much experience as you can.”

Davis ran for 25 yards while Kaleb Wagner ran for 15 and completed four passes for 80 yards. Corbin Capes caught two for 31 yards, and also had Frontier’s interception.

“I didn’t think we played very well, but I will also credit North White,” Frontier head coach Troy Burgess said. “T they knew what we were going to do, and they did a good job, for the most part, defending Caleb running the football.

“We still have work to do.”

Considerable cloudiness. A stray shower or thunderstorm is possible. High 59F. Winds N at 5 to 10 mph.

Rain showers in the evening will evolve into a more steady rain overnight. Low around 50F. Winds light and variable. Chance of rain 70%. Rainfall near a quarter of an inch.

Morning clouds will give way to sunshine for the afternoon. High 78F. Winds S at 10 to 20 mph.