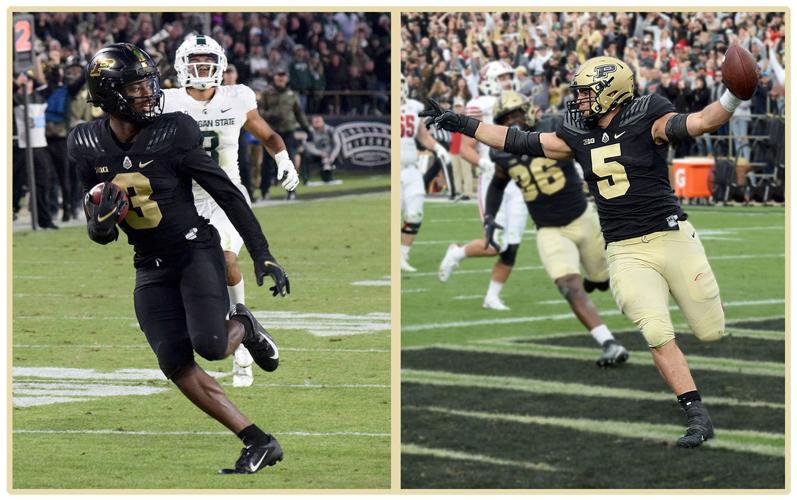 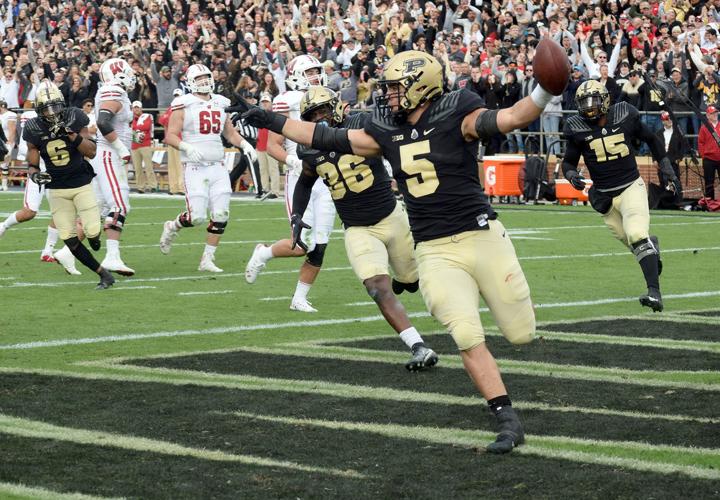 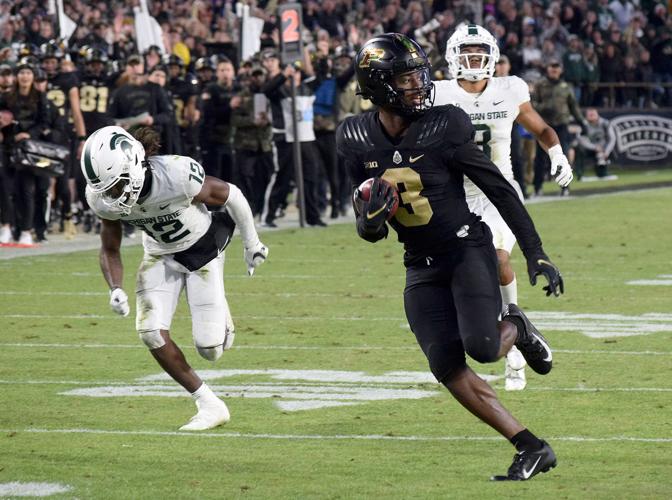 Purdue wide receiver David Bell outraces the Michigan State defense en route to a touchdown in the second half Nov. 6 in West Lafayette.

Purdue wide receiver David Bell outraces the Michigan State defense en route to a touchdown in the second half Nov. 6 in West Lafayette.

WEST LAFAYETTE – First Team All-America distinction has a nice ring to it for a pair of Boilermakers.

Bell picked up his fourth First Team All-America honors out of the five recognized by the NCAA (AFCA, AP, FWAA, The Sporting News, Walter Camp Football Foundation), just missing out on being named a unanimous All-American.

However, the Boilermaker reached consensus status to become the 21st consensus All-American in Purdue football history and the first since Rondale Moore (2018).

Bell is the only Purdue wide receiver to be named AFCA All-America throughout the program’s 134-year history. As the Richter-Howard Receiver of the Year, the best receiver in the Big Ten, Bell’s accolades continue to pile up from a stellar junior campaign. Bell was one of the best receivers nationwide, selected as a finalist for the Biletnikoff Award.

Bell led the Big Ten in catches per game (8.5) and receiving yards per game (116.9), ranking second and fourth in the country, respectively. With 1,286 receiving yards on the year, the Indianapolis native’s total sits second in program history, just 21 yards shy of the school record for a single season.

Eclipsing the 100-yard plateau in seven of his 11 games in 2021, Bell set a new Purdue record with 17 career 100-yard receiving games. He also ranks in the school’s all-time Top 10 for receptions (4th), receiving yards (5th) and receiving touchdowns (T-5th).

Bell has averaged an FBS-leading 101.6 receiving yards per game for his career, the only active receiver in triple digits. His 8.0 receptions per game is currently the second-most for an active NCAA career.

Bell torched No. 2 Iowa (Oct. 16) with 11 catches for 240 yards, the second-most receiving yards ever by a Boilermaker in a single game. He added another 200-yard day against No. 3 Michigan State (Nov. 6), hauling in 11 receptions for 217 yards and a touchdown to lead Purdue to another Top-5 win.

With the pair of performances, Bell joined Brian Alford as the only Boilermakers with multiple 200-yard receiving games in a season.

Karlaftis became the first Boilermaker on the defensive side of the ball to be tabbed First Team All-Big Ten since defensive tackle Kawann Short in 2012. His 11.5 tackles for loss ranked seventh in the Big Ten, as Karlaftis recorded at least 1.0 TFL in eight of nine conference games. The junior was one of only four Big Ten defenders to force at least three fumbles throughout the 2021 campaign.

Perhaps his most memorable play of the season was a 56-yard fumble return for a touchdown against Wisconsin (Oct. 23).

Karlaftis was a force in some of Purdue’s biggest wins. In a road victory at No. 2 Iowa (Oct. 16), the edge rusher produced 12 pressures to help the Boilermakers hand the Hawkeyes their first loss of the season. Facing another unbeaten team at the time, Karlaftis’ forced fumble and fumble recovery helped Purdue knock off No. 3 Michigan State at home (Nov. 6).

Both Bell and Karlaftis announced they will forego their senior seasons and declare for the 2022 NFL Draft.

The two Boilermakers left their mark during their final year in West Lafayette, helping lead Purdue to eight victories for the first time since 2007 and a second-place finish in the Big Ten West.

A steady rain in the morning. Showers continuing in the afternoon. High 62F. Winds NW at 10 to 20 mph. Chance of rain 70%. Rainfall around a quarter of an inch.