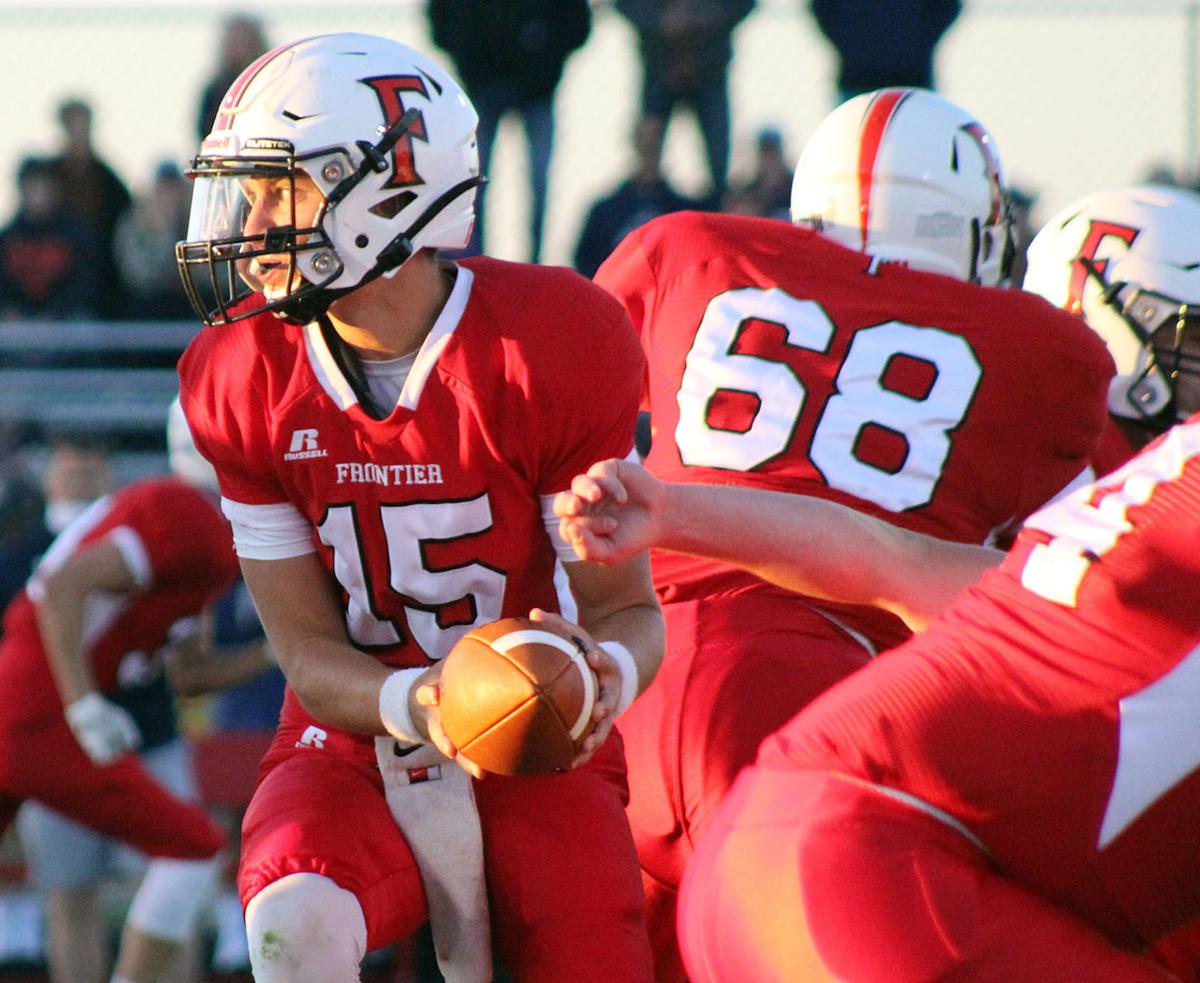 Frontier's Kaleb Wagner hands off to Caleb Atkinson against Traders Point Christian on Friday in Chalmers. 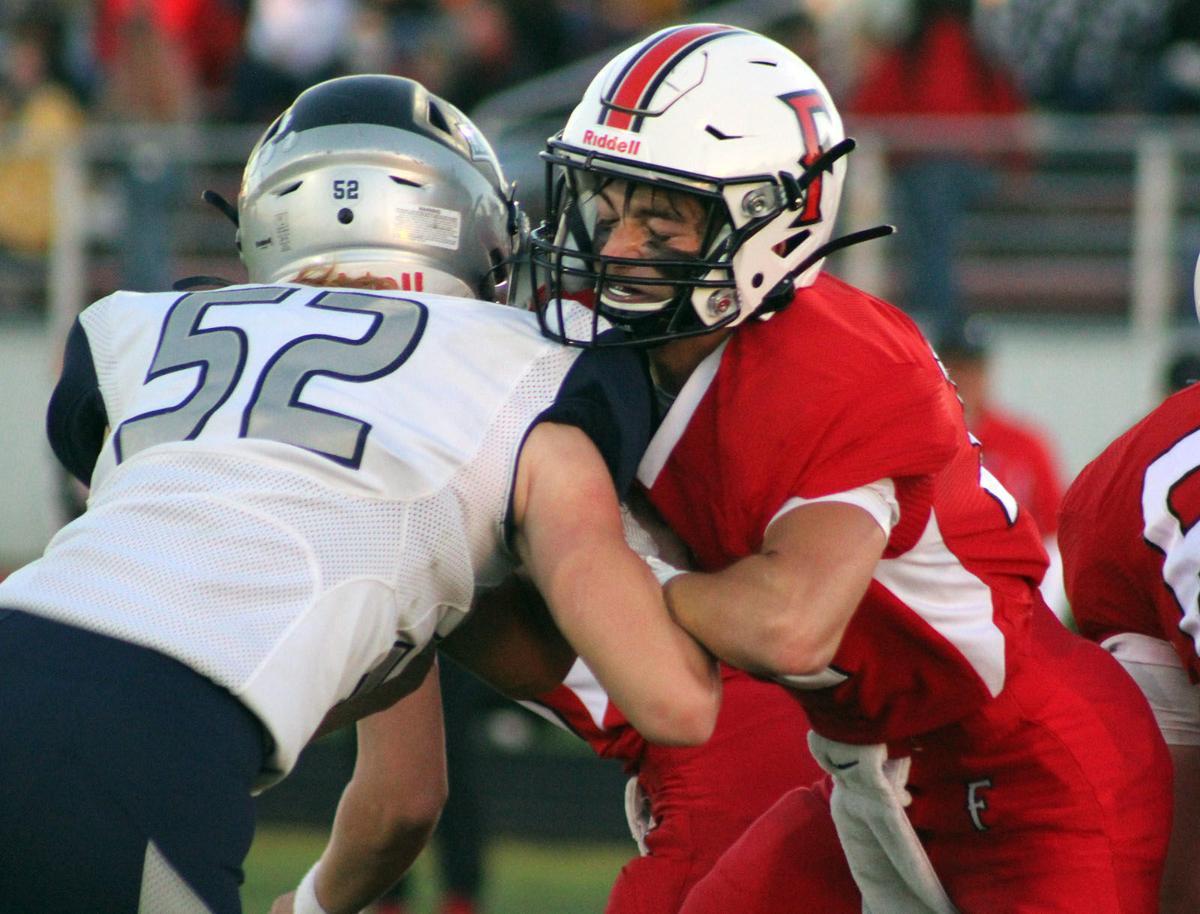 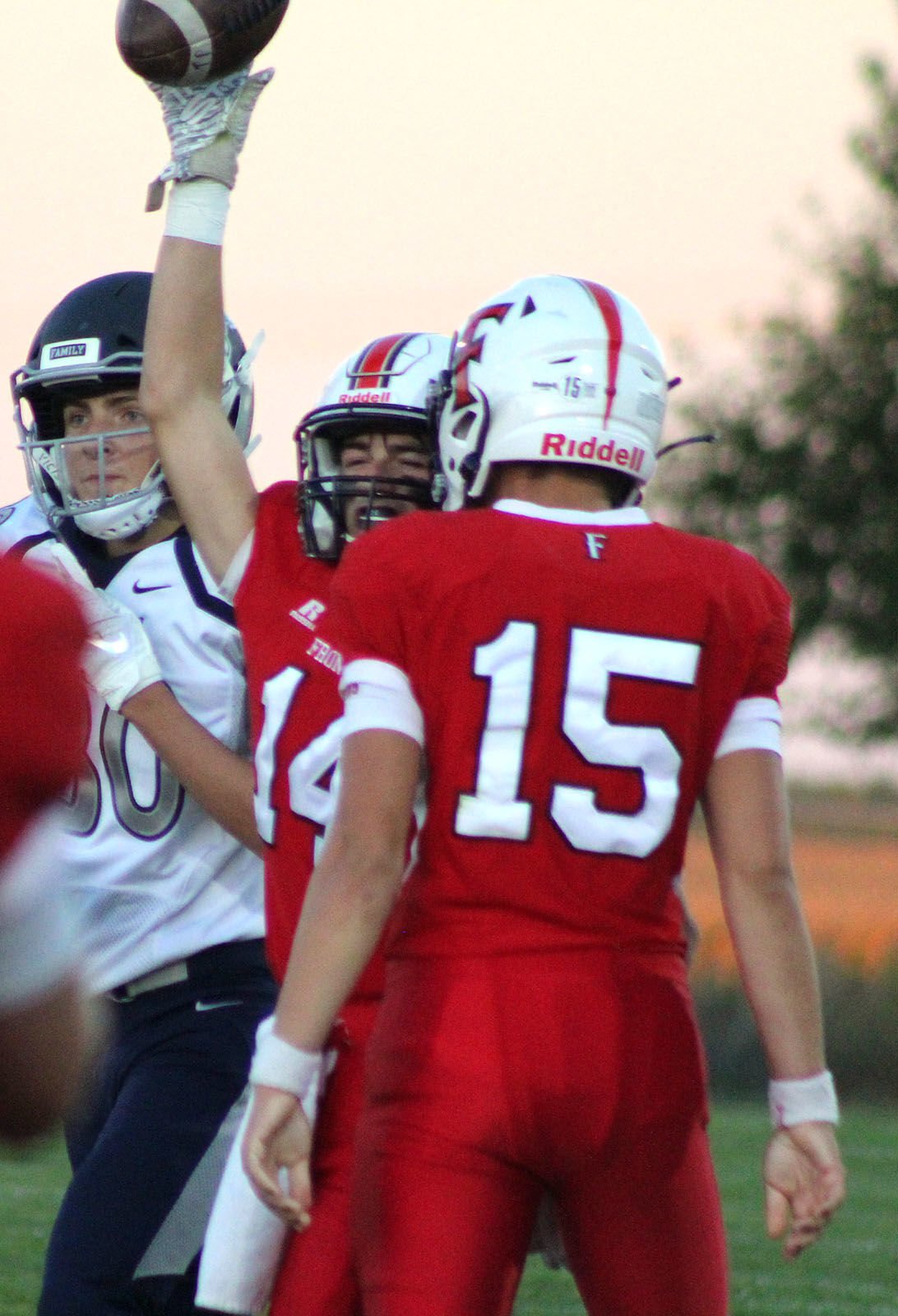 Frontier's Cole Nantkes holds up an interception against Traders Point Christian on Friday in Chalmers. 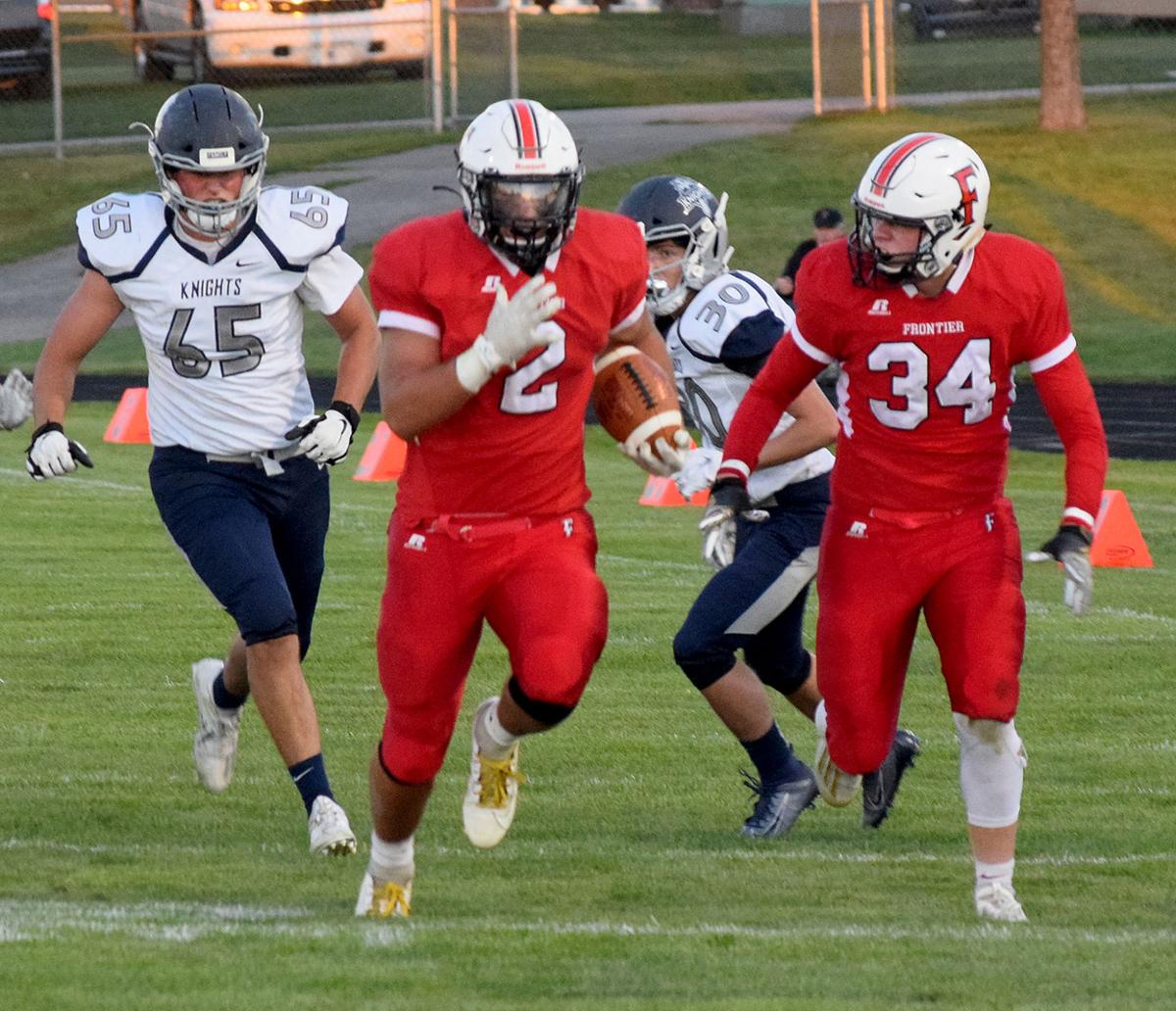 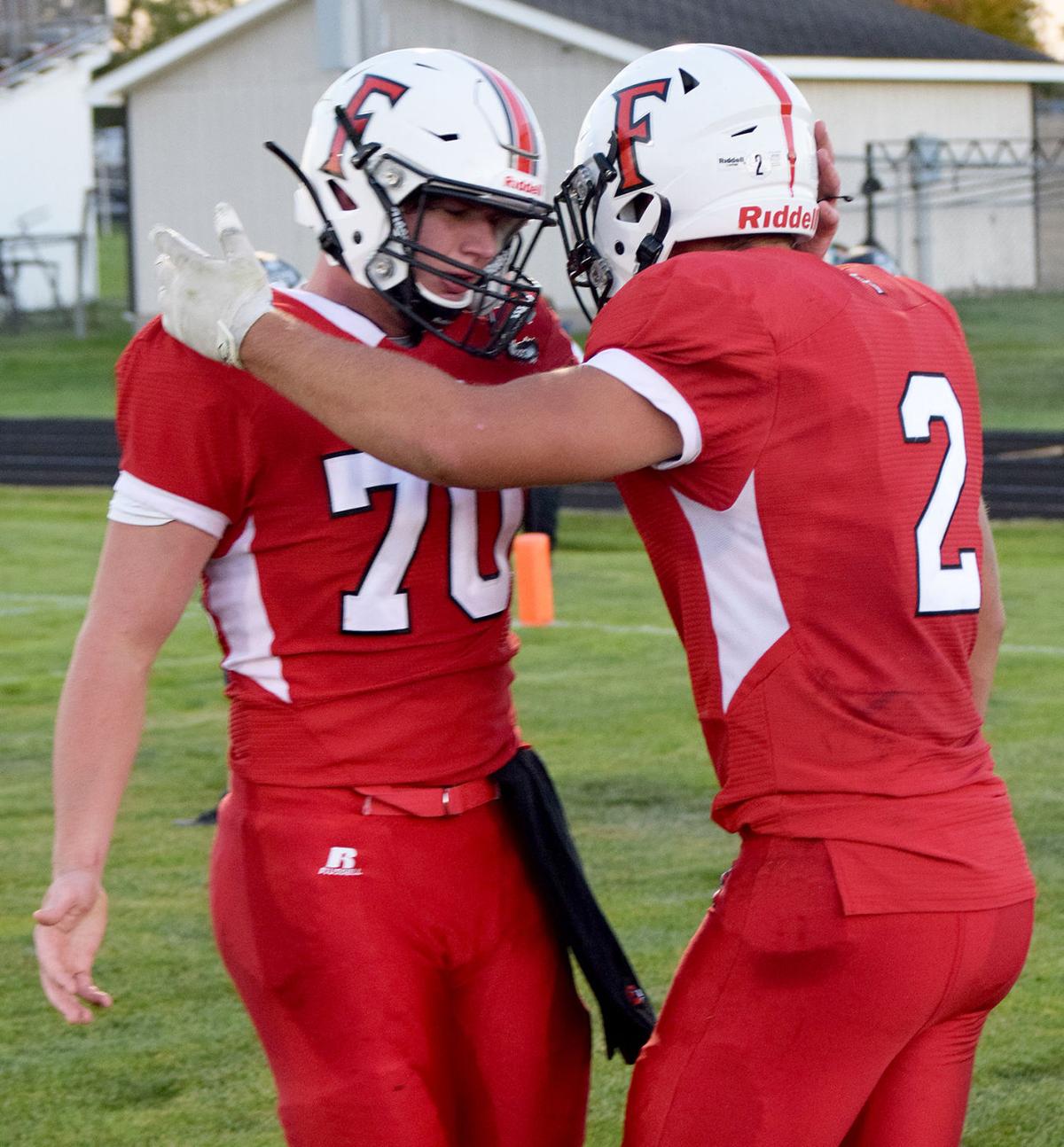 Frontier's Kaleb Wagner hands off to Caleb Atkinson against Traders Point Christian on Friday in Chalmers.

Frontier's Cole Nantkes holds up an interception against Traders Point Christian on Friday in Chalmers.

CHALMERS — It was an absolute must-have catch.

For starters, Frontier faced a fourth-and-11 on its own 29-yard line with just under five minutes remaining against Traders Point Christian.

The Falcons led by two scores at that moment, but had coughed up seven fumbles on the night that exasperated fans, coaches and players.

Junior fullback Isaiah Davis knew he had an advantage, and knew he had to hold onto the ball. Frontier called a timeout just before the play, and he begged head coach Troy Burgess to call his number.

“We lined up, and I saw I got a mismatch in front of me,” Davis said. “We called a timeout, and I told coach, ‘Coach, I can beat this dude.’ So he says, ‘Block the right positions, do your right job.’

“We all executed, and I caught it. It was probably the most important drive of the night.”

Quarterback Kaleb Wagner rolled out and hit Davis up the right-side hash mark. The pass was a little wobbly, and Davis stretched to corral it. One hand, then another, then a slight bobble.

Then it was secured, and Davis rumbled a few more steps and was tackled for a 19-yard gain. It gave Frontier a first down and kept a drive alive.

The Falcons went on to score on that drive to finally put away the Knights, 32-12.

“I wanted to run a fake there, but I was going to do it differently,” Burgess said. “Isaiah made a good decision to say, ‘Middle of the field’s wide open. Let’s throw it.’ It was a great call by Isaiah, and he made a heck of a catch.

It was feast or famine all night for Burgess’ team. Frontier (4-1) had 11 offensive possessions. It scored on five of them, and gave the ball away on six.

“I’ve never seen it. Never seen it,” Burgess said. “How you can have six fumbles lost and still win the game is … wow.”

Frontier’s first fumble came on its opening drive, after senior running back Caleb Atkinson rumbled for 23 yards but dropped the ball before he went down. Traders Point (1-2) used it to its advantage, marching 76 yards and taking a 6-0 lead when quarterback Gabe Sink found Phillip Moran for a 33-yard touchdown and a 6-0 edge.

The home team leveled the score a minute into the second quarter as Atkinson burst through for a 2-yard TD and a 6-6 game. The Falcons’ Cole Nantkes intercepted Sink two plays later. Atkinson — who piled up more than 350 yards rushing — took off for a 41-yard score two plays after the interception for a 12-6 advantage.

The Knights tied it up on their next possession, with Sink finding Zavior Gibson up the left-side hash mark for yardage into the secondary, and Simpson outracing the rest of the Falcons for a 56-yard score and a 12-12 score.

On the ensuing kickoff return, Corbin Capes fumbled the ball, picked it up at his own 1-yard line and ran off 91 yards before being brought down just inside the Knights’ 10-yard line.

Davis ran once for six yards, then another for the final three and an 18-12 lead with 5:33 remaining in the half. Atkinson scored the 2-point conversion, and Traders Point never got within a score of the hosts.

Kaleb Wagner found Nantkes for a 7-yard score with 10 minutes left in the fourth quarter, and Charlie DeLosh tacked on the last score on a 2-yard run.

Frontier ran for more than 400 yards on 54 carries. It also made a couple defensive adjustments after losing two players for the season, and dealt with new players at new positions because of it.

Considerable cloudiness. A stray shower or thunderstorm is possible. High 59F. Winds N at 5 to 10 mph.

Rain showers in the evening will evolve into a more steady rain overnight. Low around 50F. Winds light and variable. Chance of rain 70%. Rainfall near a quarter of an inch.

Morning clouds will give way to sunshine for the afternoon. High 78F. Winds S at 10 to 20 mph.