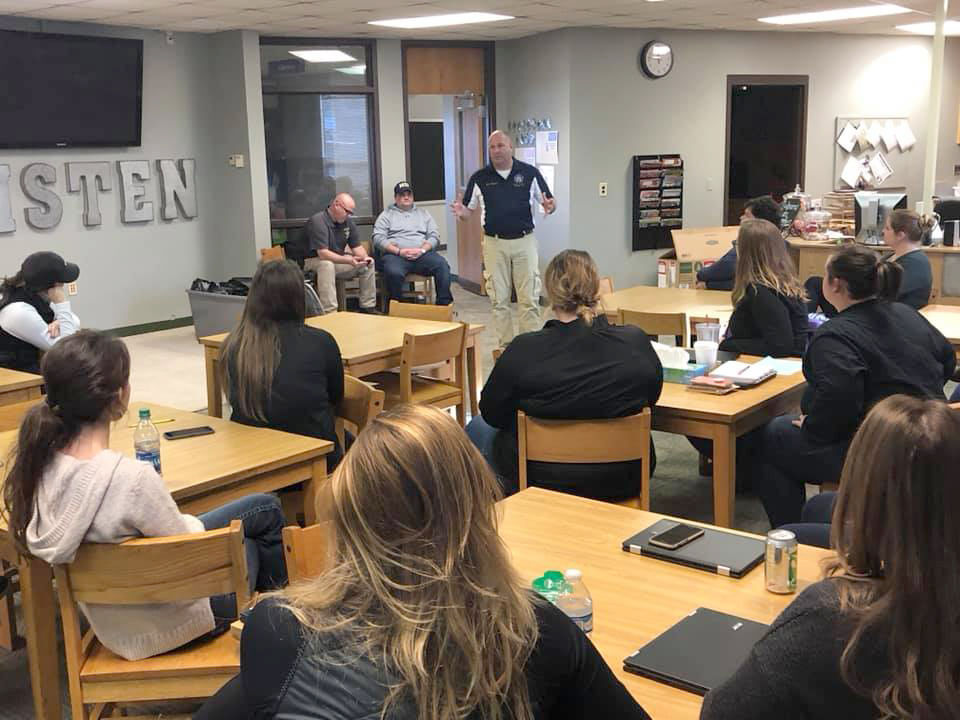 This photo, posted Jan. 4, 2019, to Meadowlawn Elementary School’s Facebook page, shows ALICE instructors in a classroom setting with a group of teachers. The post stated, “Thankful for the partnership between our school and local law enforcement. Today our staff received training from The (sic) White County sheriffs (sic) department. Safety is priority at ML!” 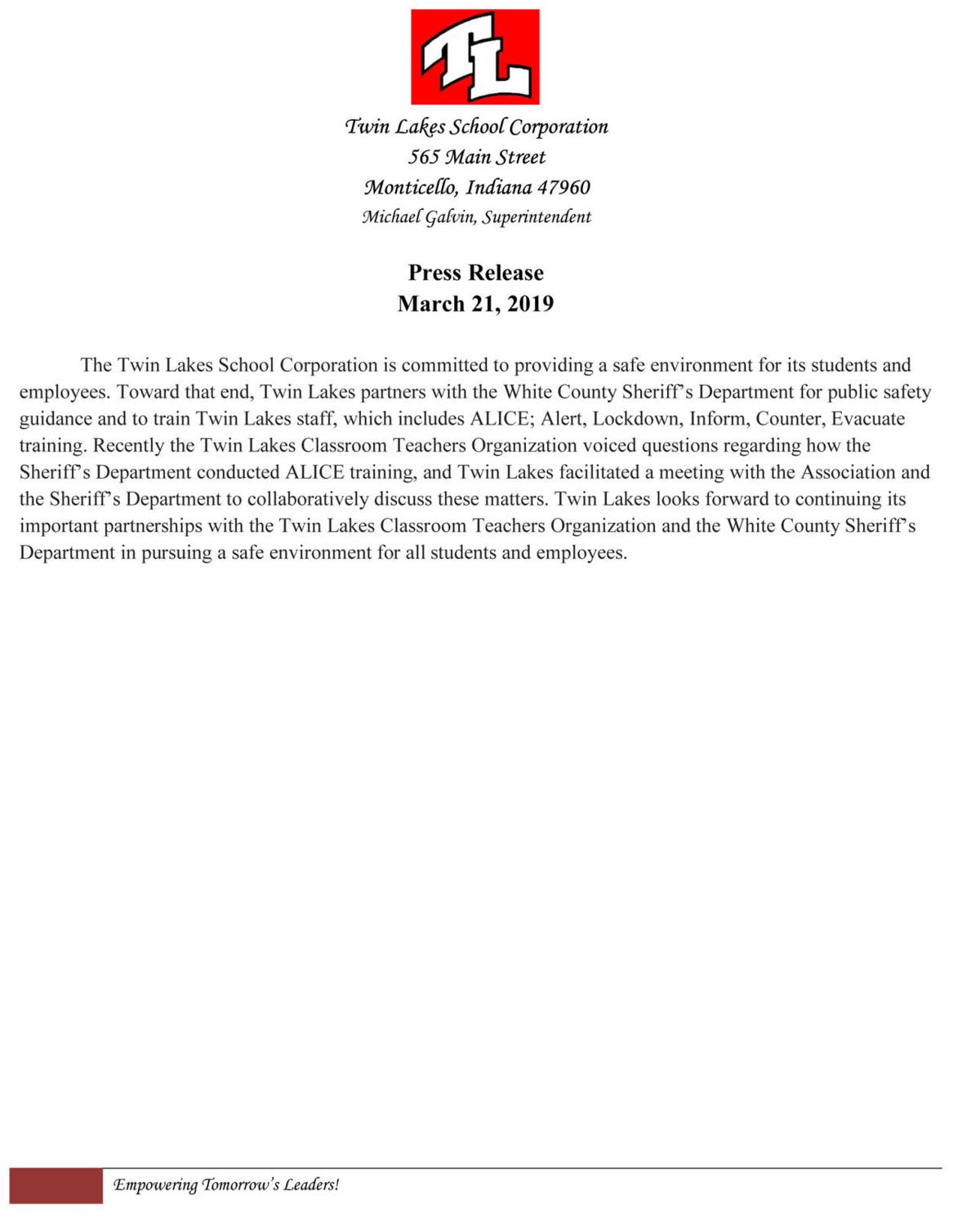 The press release from the Twin Lakes School Corporation.

This photo, posted Jan. 4, 2019, to Meadowlawn Elementary School’s Facebook page, shows ALICE instructors in a classroom setting with a group of teachers. The post stated, “Thankful for the partnership between our school and local law enforcement. Today our staff received training from The (sic) White County sheriffs (sic) department. Safety is priority at ML!”

The press release from the Twin Lakes School Corporation.

According to an ISTA post on Twitter,”During (an) active shooter drill, four teachers at a time were taken into a room, told to crouch down and were shot execution-style with some sort of projectiles — resulting in injuries to the extent that welts appeared and blood was drawn.”

The teachers who approached ISTA about their concerns have not been publicly identified and none have come forward to the Herald Journal about their experience.

Teacher Juli Topp, speaking for the Twin Lakes Classroom Teachers Association, said more than 20 teachers were shot and some were injured.

“There were a lot of teachers with welts and bruising (from the pellets). Several of them broke the skin and caused bleeding and, of course, scabbing,” she said.

White County Sheriff’s Department Chief Deputy David Roth said he attended the training and heard of no such thing.

“I was there to observe it,” he said. “I have no problem telling you I was there.”

Roth was accompanied by two other deputies, one who served as an ALICE instructor and another who played the part of the suspected shooter. Roth declined to name the other deputies involved to preserve their working relationship with the school system.

Roth said the instructor “put on a very good class” and added that it was to the exact specifications by which Roth and other law enforcement officers have been trained.

He said the opening scenario in which the teachers were shot was explained beforehand. He added that prior to the scenario, teachers were given paintball masks to wear, in addition to being shown the Airsoft guns that were to be used.

Roth said the instructor fired the Airsoft gun inside the classroom “so they could see that it was just a pellet, to show that we aren’t afraid of it and they shouldn’t be afraid of it.”

Participants, with the exception of one teacher who declined to participate but shadowed officers throughout the training, were brought into a classroom four at a time, he said.

According to Topp, before the teachers received any training in ALICE, White County deputies took them away from the others in small groups and into a classroom. They were given paintball masks but not told why and were not given anything to protect the rest of their bodies. They were then told to face the wall and squat down, she said.

“They had no idea they were going to be shot — with anything,” Topp said. “They were never even offered a waiver.”

According to Topp, teachers were also told not to tell the others what would happen when the next group went into the room.

“Yes, teachers were shot, but it’s part of the training and that’s exactly how the training was set up when I went through it,” Roth said. “We didn’t go to this training to maim a teacher or to traumatize a teacher. We want to prepare them. It’s a sad day when teachers have to prepare for this kind of training.”

He added that in addition to Twin Lakes, North White and Frontier also went through “the exact same training in the exact same way.”

Frontier had an active shooter training session Friday morning for Chalmers and Brookston police departments, with WCSD personnel and others on scene. Students and teachers were present to witness the training, and a few students participated in the exercise.

“I told them that there would not be anybody shot with a pellet gun at Frontier School Corporation,” Superintendent Dan Sichting said.

Roth said the department received no complaints of welting or bleeding during the Jan. 4 training, nor did they hear of any long-term pain during the scenario.

“We don’t force (teachers) to do anything. The day is voluntary,” he said.

Topp only partially agrees with Roth.

“They did volunteer for the training. They did not volunteer to be shot,” she said.

State Sen. Brian Buchanan (R-Lebanon) is a member of the Senate Education Committee and represents White County, among others. He said Wednesday’s testimony in front of the committee was the first he had heard of teachers being shot with pellets.

“I will say it’s concerning,” he said. “I don’t know exactly what goes into active shooter drills. … I don’t know if that’s standard or not, but several people are asking some questions.”

“We want to give them a realistic scenario so they know their body acts in a certain way during trauma. (They) need to be able to realize that,” he said. “There’s no other way to put your body through that sort of scenario without training that way; that’s the way law enforcement trains.”

When asked by the Herald Journal for further comment, Twin Lakes Superintendent Mike Galvin said, “That’s all we’re presenting at this time.”

Asked if there will be a lawsuit over the incident, Topp said, “I’m not at liberty to speak on any of that.”

Although none of the teachers involved have publicly come forward, Galvin stated by email that the district hasn’t issued a gag order forbidding teachers to speak to the media about the incident.

Topp said they were told not to speak to the media on school district property.

“I was there to observe it. I am also an ALICE instructor. I have no problem telling you I was there.”

Letter to the editor: Shooting teachers not standard practice for civilians, Page 4.