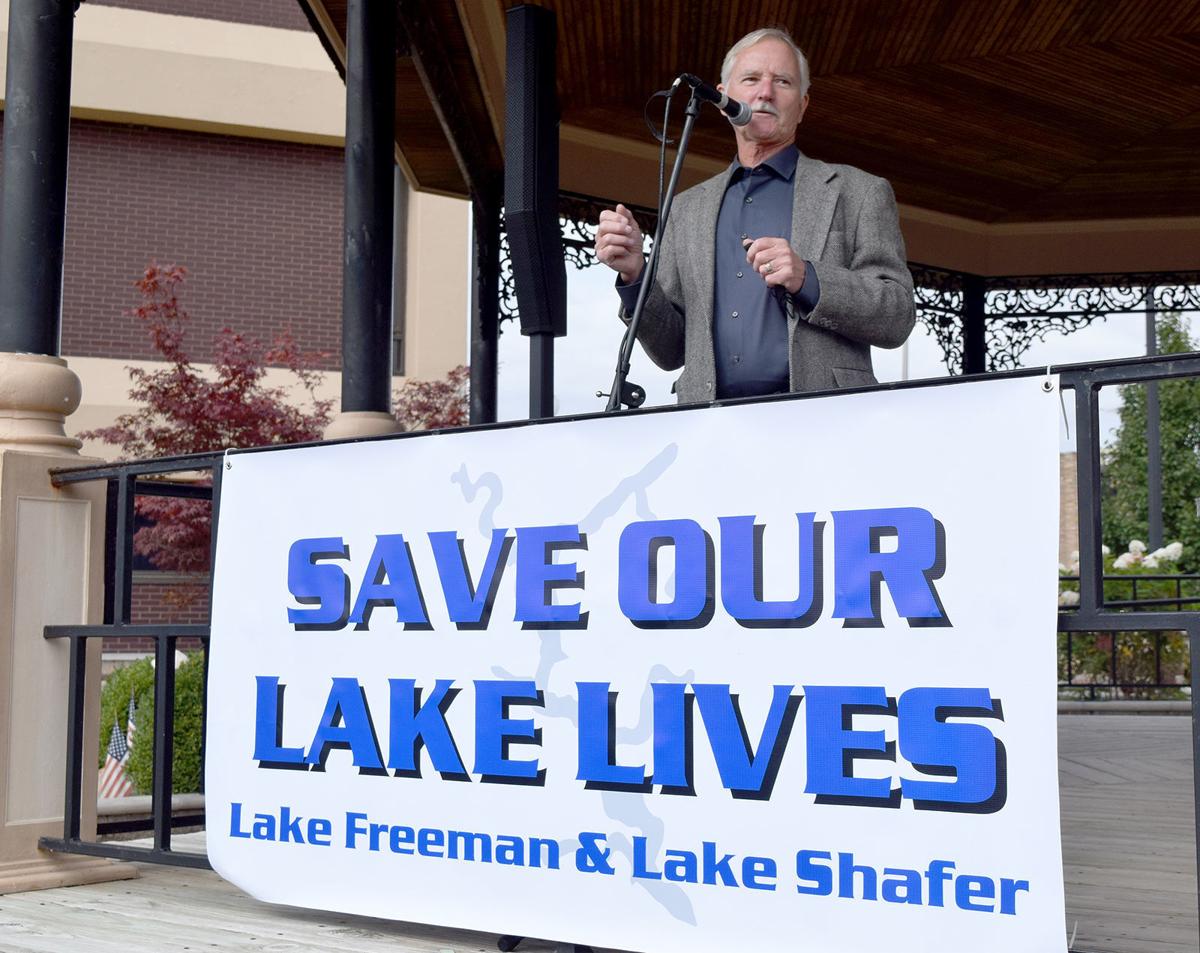 Gary Baldwin speaks to the crowd Oct. 3 at the Sale Our Lake Lives rally in downtown Monticello. Baldwin recently bought a home on Lake Freeman and organized the rally. 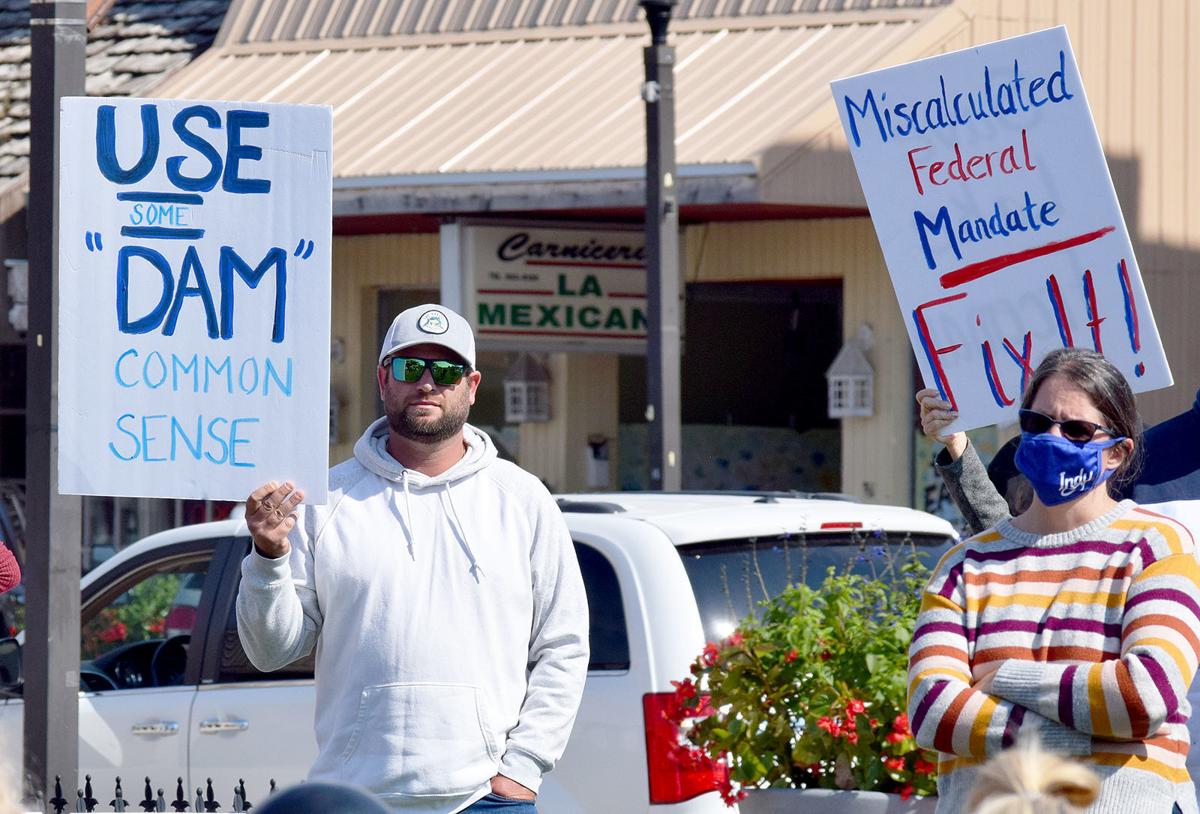 Home and business owners along Lake Freeman show their support during the Save Our Lake Lives rally at the White County Building. 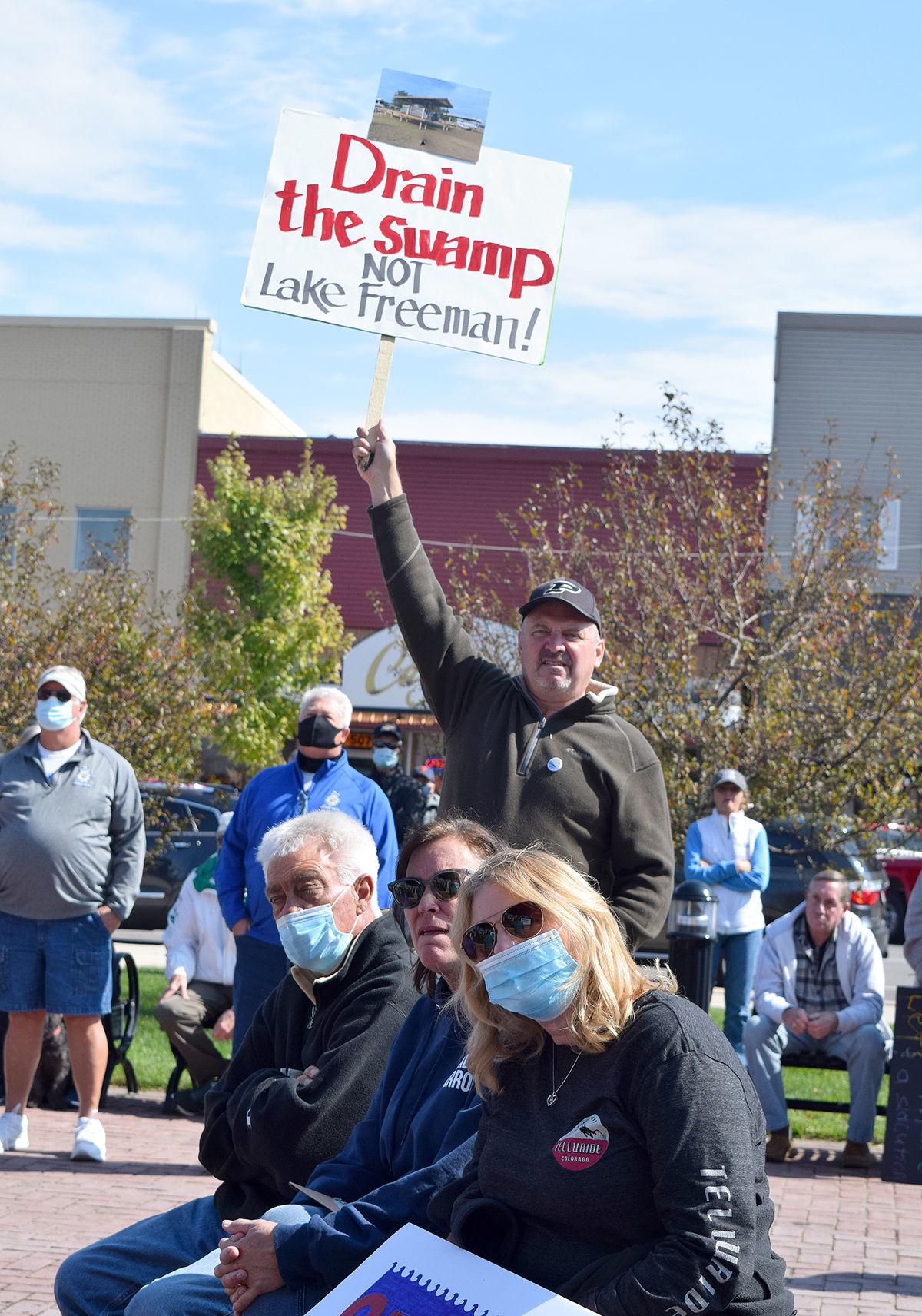 Bob Dion, who owns a home along Lake Freeman, hoists a sign showing support to end the draining of Lake Freeman.

Gary Baldwin speaks to the crowd Oct. 3 at the Sale Our Lake Lives rally in downtown Monticello. Baldwin recently bought a home on Lake Freeman and organized the rally.

Home and business owners along Lake Freeman show their support during the Save Our Lake Lives rally at the White County Building.

Bob Dion, who owns a home along Lake Freeman, hoists a sign showing support to end the draining of Lake Freeman.

MONTICELLO — Chris Peters gave one of the most impassioned speeches Saturday at the Save Our Lake Lives rally in downtown Monticello.

He even asked mid-speech if there was a censor button in case he began swearing.

The co-owner of the Madam Carroll managed to control his tongue, but said he refuses to shut down his business while Lake Freeman hemorrhages water to help save a few endangered species of freshwater mussels downstream on the Tippecanoe River.

“I refuse to quit operating,” he said. “I don’t have an option. … If you guys want to see some carnage, just hang out because it’s going to get a lot worse before it gets better.”

Water levels on Lake Freeman have dropped about seven feet in more than a month because of two connected reasons: A drought in the area that has produced little rainfall, which in turn has prompted a federal mandate, established in 2012 by the US Fish and Wildlife Service (USFWS) requiring a certain amount of water to be drained from the lake through the Oakdale Dam, to kick in.

A drought in summer 2012 revealed the existence of the endangered mussel species in the Tippecanoe River south of the dam.

Saturday’s rally was organized by Gary Baldwin, a homeowner on Lake Freeman, as a megaphone for local, state and elected leaders to act and prevent further lowering of lake levels. An estimated 200-plus people attended the noon event.

“I bought a house on Lake Freeman shortly after the water went down in August – something I wasn’t totally aware of,” he told the crowd. “I now have beachfront property and I really bought lakefront property, so this does upset me a little bit.”

State Rep. Don Lehe (R-Brookston) said there are “way too many people out there in the world” who believe mussels are valuable.

“It’s a challenge. I’m looking forward to getting this solved,” he said. “It’s not just about this year, it’s for the next umpteen years.”

According to USFWS’s website, mussels play an important role in the aquatic ecosystem. Many different kinds of wildlife eat mussels, including raccoon, otters, herons and egrets. Mussels filter water for food and thus are a natural purification system.

The website also explains why they believe Midwest mussels are “imperiled,” citing “significant long-term changes” to lakes and waterways, adding “those changes have been so dramatic that these aquatic animals have trouble surviving.”

The mandate kicked in this summer because, USFWS says, the area is currently experiencing a drought. According to the U.S. Drought Monitor, most of Lake Freeman (as of Sept. 29) is in an area classified as “D0 – Abnormally Dry.”

In layman’s terms, it’s a short-term dryness with “some lingering water deficits.”

The dividing line between D0 and D1 (Moderate Drought) diagonally crosses an area just north of the White County Airport and south of the Monticello city limits (just below the third bend in the Tippecanoe River). D1 is classified as experiencing “some water shortages” and “voluntary water-use restrictions requested.”

Areas including, and north of, the Madam Carroll are in D1, according to USDM. Lake Shafer, with its water levels relatively steady, is also in D1.

Baldwin questions the federal mandate, calling it “the US Fish and Wildlife Service’s ‘great experiment.’”

“They used the Endangered Species Act to decide how NIPSCO, our local utility, is supposed to run the dams,” he said. “Based on what’s happened in the last 40 days, USFWS is trying to save 10,332 mussels – that’s the total they assume (is endangered). In those last 40 days, in our stretches and based on my calculations, 26,400 have already died in Lake Freeman – and I’m using conservative numbers.

“This brings up the question: Where in the Endangered Species Act does it say it’s acceptable to sacrifice one animal’s life for another animal’s life?”

The draining of Lake Freeman, he said, is quickly turning it into a dry (muddy) lakebed, threatening lakeside businesses and homeowners that rely on summer tourism, not to mention the existing wildlife in and around the lake.

In 2017, he said, citing official documents, that USFWS approved a “mussel enhancement plan” that begins the process of locating mussels “in and above” Lake Shafer.

“USFWS, who cares nothing about people and only the mussel ... when they have control above Lake Shafer and below Lake Freeman, what will happen to our lives and our lakes,” he asked. “They have demonstrated to us what they will do to Lake Freeman. Now they are going to start making changes to Lake Shafer. That’s what (the document) is telling me. And you can go read it for yourself. The documents are out there.”

The Shafer Freeman Lakes Environmental Conservation Corp. (SFLECC), which had no connection to Saturday’s rally, had a hearing Oct. 5 before the U.S. Court of Appeals in Washington, D.C., discussing the legality of the federal mandate. John Koppelman, chairman of SFLECC’s water level committee, said a ruling shouldn’t be expected for the next several weeks.

Meanwhile, Peters has been forced to dock the Madam Carroll, which they purchased 11 months ago. They announced plans late last year to turn the vessel into a year-round venture.

But for the last few weeks, they’ve had to reposition the boat in dock several times to keep it from hitting bottom.

Baldwin said Young, Buchanan and Negele reached out to offer their support but said they were unable to attend because of prior commitments.

David Diener, White County Commissioner, said he could not attend because of a personal commitment, but said the county has supported “the SFLECC from the beginning of the crazy situation and will continue to do so.”