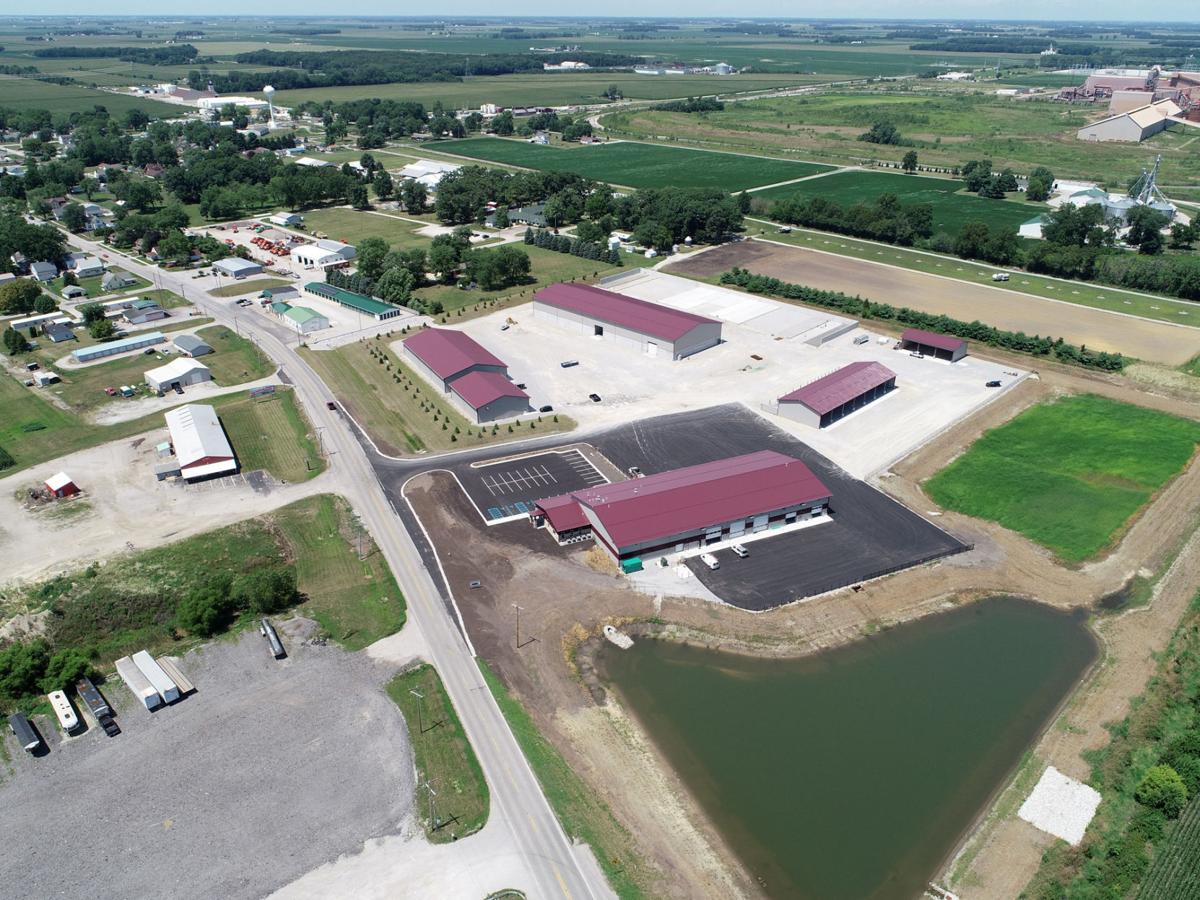 This aerial view provided by an unmanned aerial vehicle shows the sprawling White County Highway Garage complex just east of Reynolds on US 24. 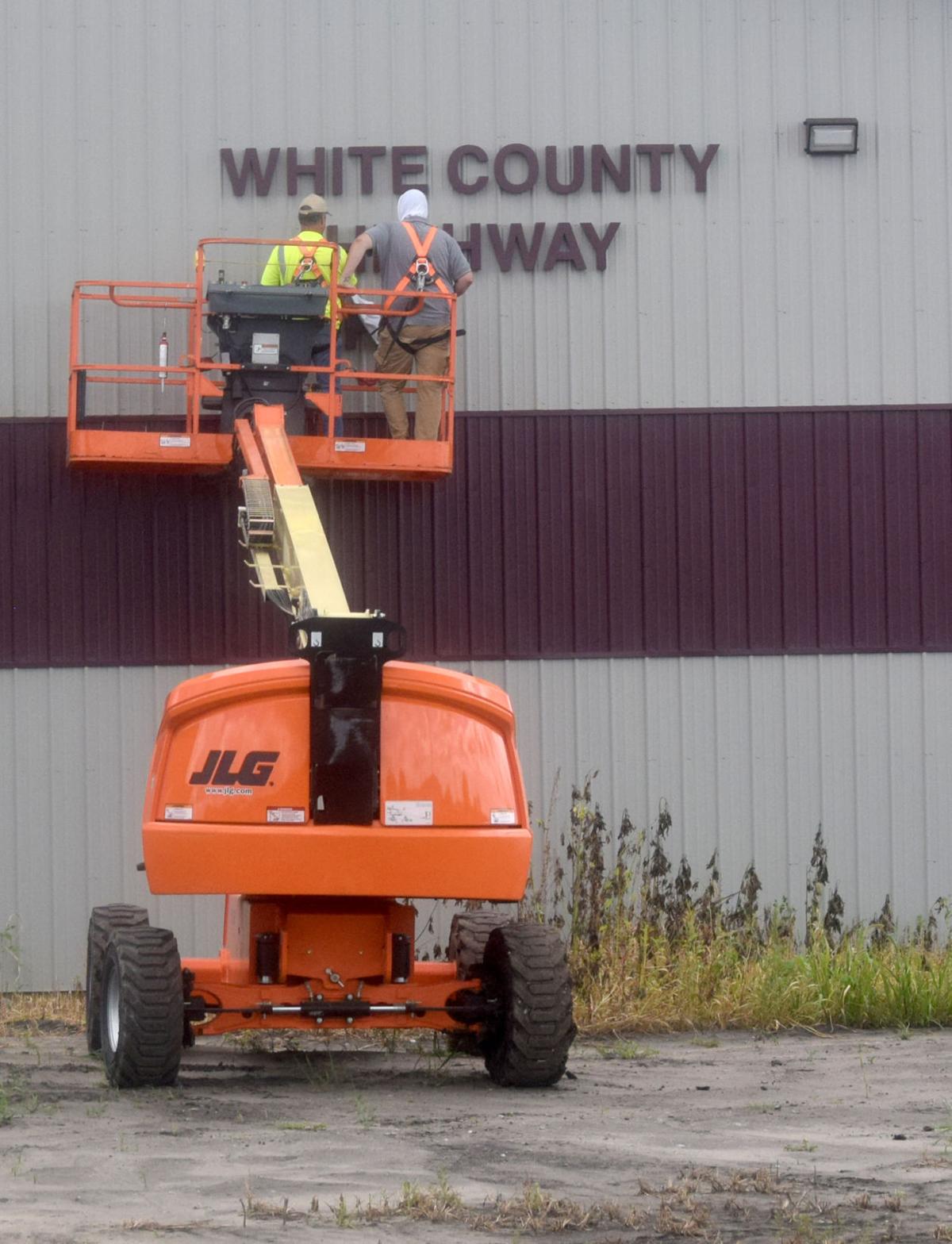 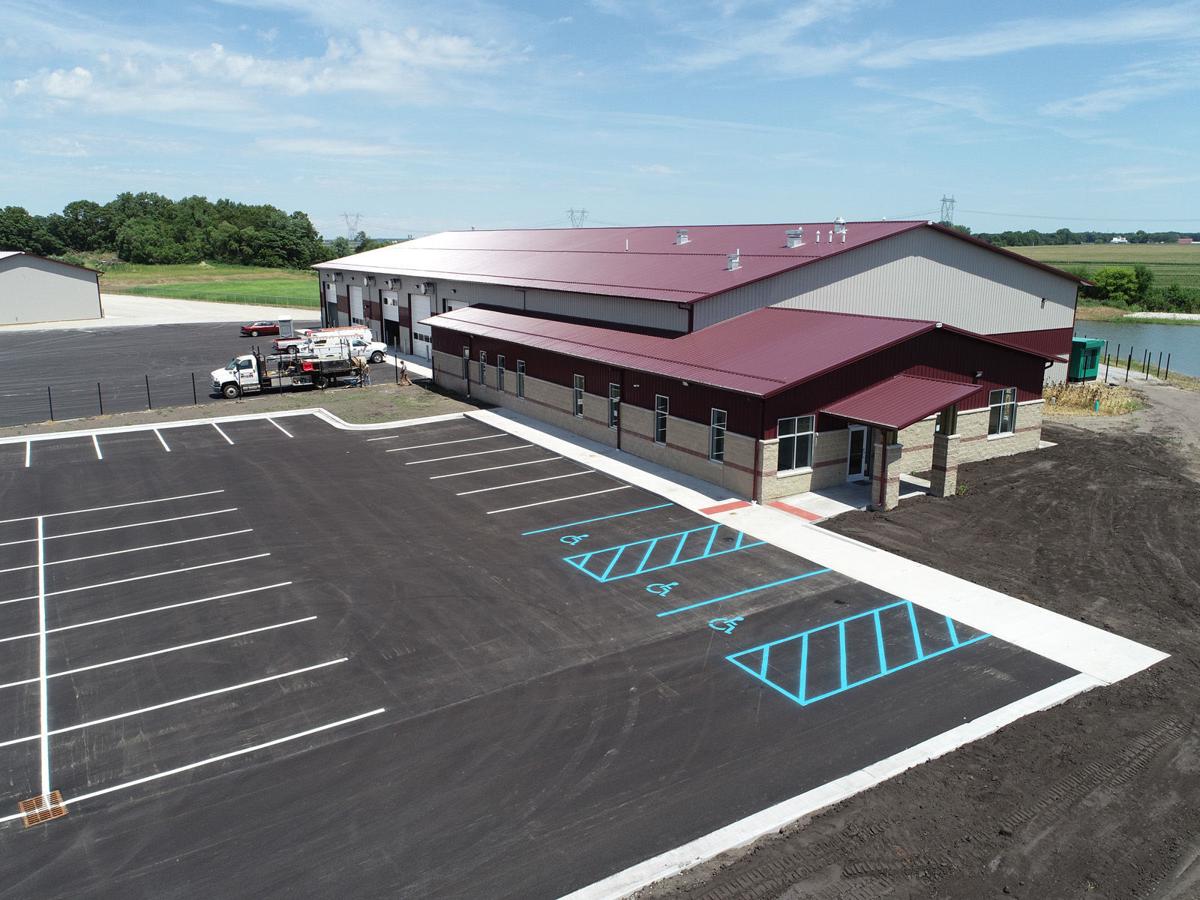 The administrative offices are located at the front of the complex, while the main garage is situated in the rear.

This aerial view provided by an unmanned aerial vehicle shows the sprawling White County Highway Garage complex just east of Reynolds on US 24.

The administrative offices are located at the front of the complex, while the main garage is situated in the rear.

REYNOLDS – The White County Highway Department staff has been slowly moving into their new digs along US 24 east of Reynolds.

Major construction work wrapped up on the new $13.5 million White County Highway Garage on the last day of August. A new fuel island was installed just last week in the middle of the sprawling complex and crews are working on finishing the smaller details, such as landscaping and installing furnishings.

The new highway garage replaces the county’s former facility near the White County 4-H Fairgrounds that they’ve been using for decades, according to White County Commission President John Heimlich.

“You could say it has outlived its usefulness,” he said.

At first, there was some pushback as to why the county spent $13.5 million on such a huge facility on land that had been used as drain field for the town of Reynolds.

“People may say the new garage is big, but the old facility been outgrown for quite some time,” Heimlich said. “I went back through some old meeting minutes and (the old facility) was originally built in 1949 or 1950.

But the highway garage is more than just a sparkling new facility. In the project planning was a design to help with the drainage problem.

“We can drain the entire town of Reynolds during big rain events,” said Mike Kyburz, White County’s highway superintendent. “The commissioners built that into the project so the town of Reynolds wouldn’t have to worry about it. The east side of Reynolds has had a notorious flooding issue in the past. This greatly helps it.”

Road salt, he said, sat outdoors year in and year out, as did many of the county’s heavy-duty trucks and other vehicles.

“We’ve had equipment and material at four other sites. Now we can bring everything to a central location,” Heimlich said. “The old site last 70 years. You never know about the future, so you want to leave a little room for growth. Hopefully this will set us up for another 70 years.”

The increased space and centralized location aren’t even the best part of the project?

According to Heimlich, not one penny of the $13.5 million price tag came from taxpayer dollars.

“It all came from landfill money,” he said.

That’s the White County Landfill between Monticello and Buffalo.

The county is paid monthly by Waste Management, which operates the landfill, for tipping fees at a set price per ton for in-state garbage and a different and higher set price per ton for out-of-state trash. According to White County Auditor Gayle Rogers, the out-of-state tonnage is nearly four times the in-state tonnage and paid at a higher rate per ton.

“Currently, 5 cents per ton goes to the town of Monon each month to help with the wear and tear on their roads from the trash trucks coming from the north to the landfill. Of the remainder, 75% is deposited into a Solid Waste Operating Fund and 25% into a Solid Waste Reserve Fund,” she said. “On average, our tipping fees total about $400,000 per month.”

The highway garage project relied solely on the landfill’s reserve fund because, at the end of 2019, it contained $15.2 million.

“The (solid waste) reserve fund is designed to be there when the county needs reserves, whether that be for specific projects or in times of crisis,” Rogers said. “Those funds will be there to see us through.”

Kyburz said he had been working with architects on the highway garage project design for nearly a year before breaking ground at the facility in spring 2019. He said the facility is “basic” by industry standards, but it’s more than enough for what he needs.

“By the time we get everything moved in and situated, we will be about 80 full,” he said.

The site includes a main administrative office, which is attached to the actual highway garage where maintenance work is performed on the vehicles. There is also a storage area for salt and sand, which the county uses to treat roads during hazardous winter events, another area for equipment storage, a fuel island to service the county’s fleet of trucks, and an area where employees can mix chip and seal – the material used to fill in potholes along the county’s 500 miles of road surface.

Most of the facility will be behind an electronic gate.

Kyburz is looking forward to working with vehicles and tools that will be properly stored out of the elements – especially during the winter.

“It will be nice to have a heated building to put our equipment in. It’s a pain to winterize. It takes longer to winterize and de-winterize our equipment than it does to go do an actual job,” he said. “This is going to move us so many years ahead in efficiency.”

Kyburz credited the White County Commissioners – Heimlich, Steve Burton and David Diener — for getting the project off the ground.

“The commissioners put together a really good project,” he said. “There is nothing more here than what we really need. I could have added a whole bunch of stuff and gone hog wild. We have a nice piece of ground and a lot of room, but it’s all pretty basic.”

It all began, Kyburz said, when the commissioners visited the old highway department facility for Thanksgiving dinner several years ago.

“They were looking around and one day they came to me and said they wanted to build a new highway garage,” he said. “I had never really asked for anything from them, in terms of a new building. They came to me with it.”

Kyburz is planning to have the department fully operational at the new site by Thanksgiving.

“We will move in as we can because we’re still doing road work and getting ready for winter,” he said. “I want to do it right, so it doesn’t get cluttered.”

Be sure to watch the time-lapse video of the White County Highway Garage construction attached to the online version of this story at www.thehj.com.