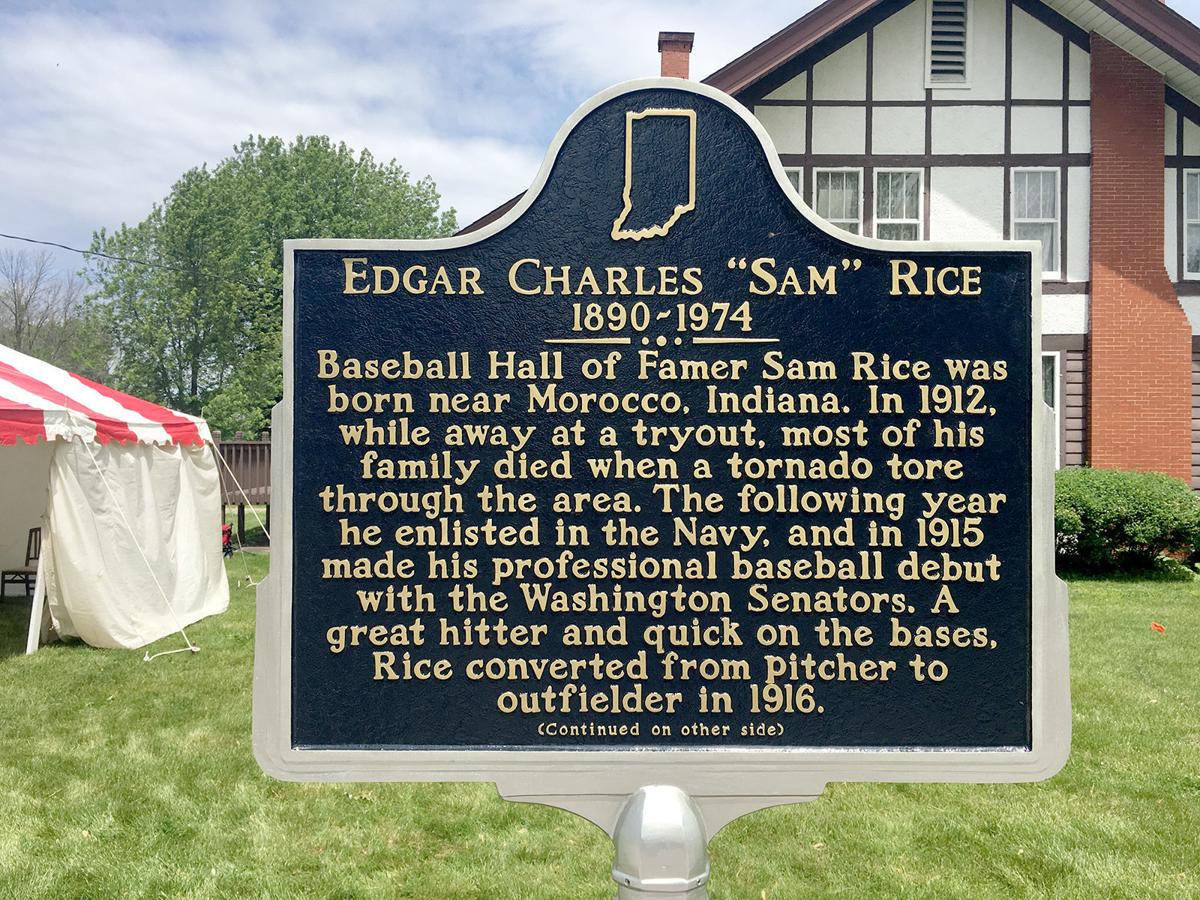 The Indiana State Historical Marker honoring Morocco native son and Major League Baseball Hall of Famer Sam Rice. This side faces the road along West Michigan Avenue on the west side of Morocco. The Scott-Lucas House is in the background. 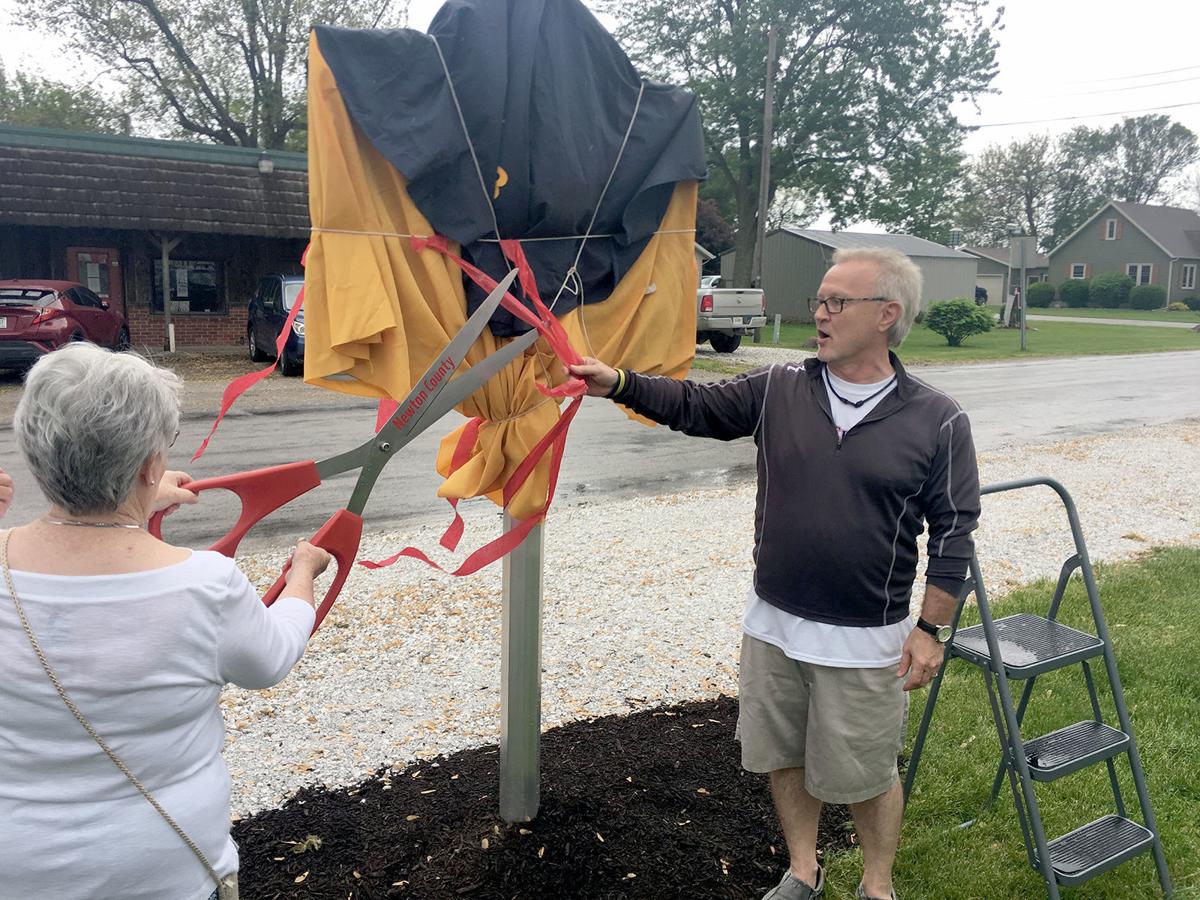 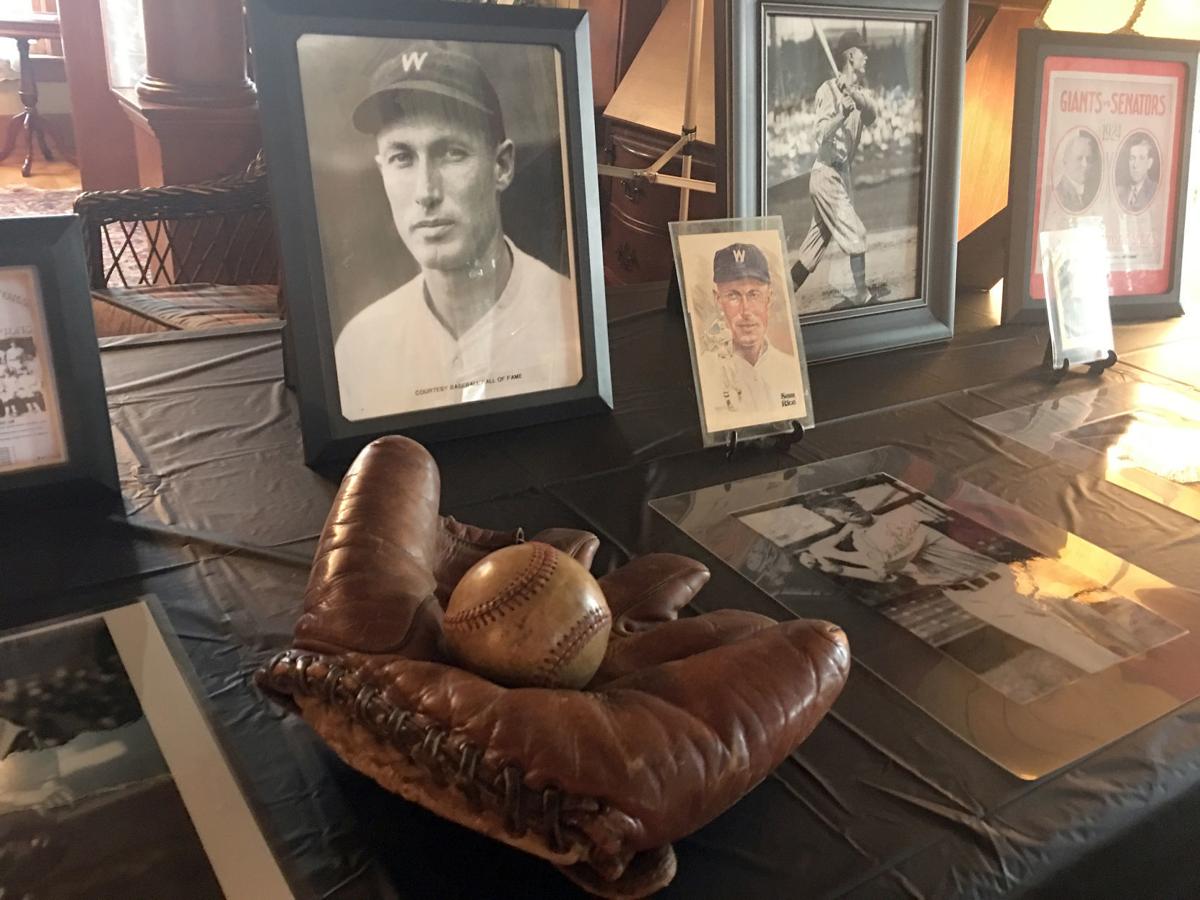 A display table filled with photos and memorabilia of Sam Rice also featured a 1920s-era baseball glove and time-worn baseball. The display was moved to the Morocco Library following the Indiana State Historical Marker dedication Saturday at the Scott-Lucas House. 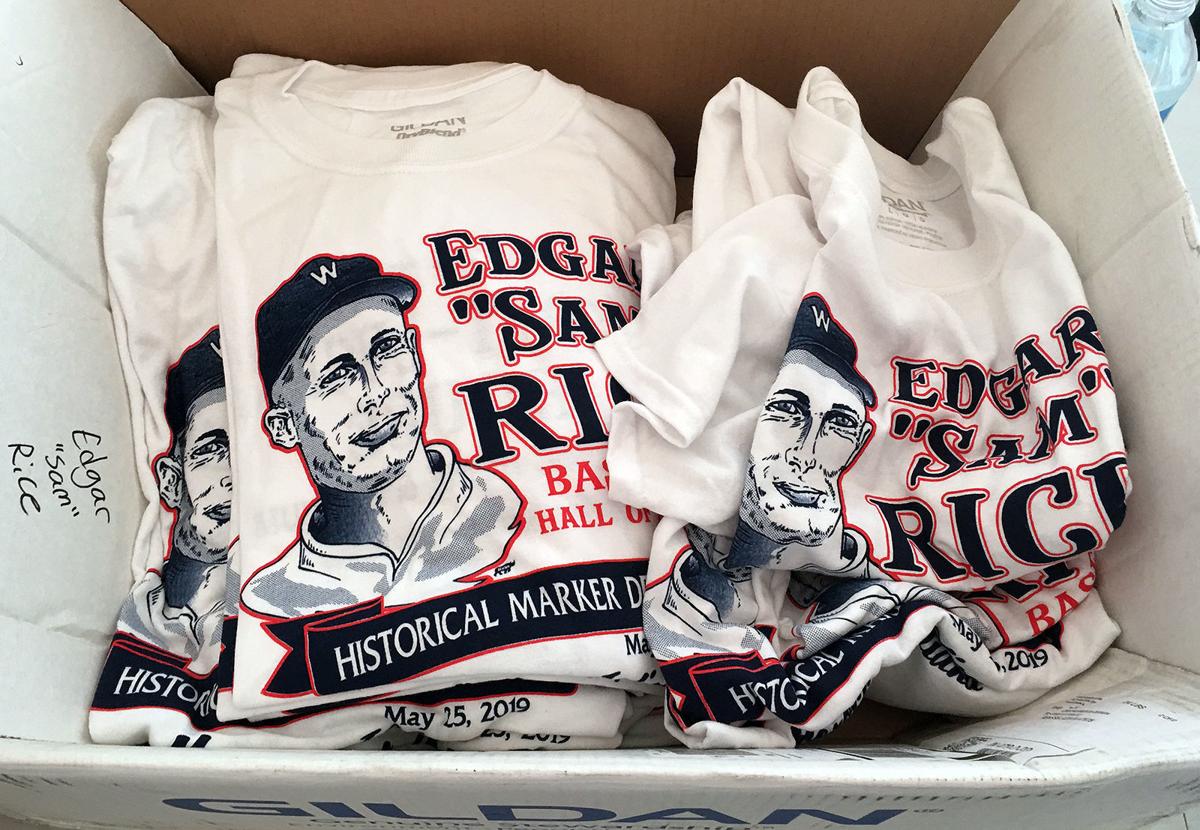 The Indiana State Historical Marker honoring Morocco native son and Major League Baseball Hall of Famer Sam Rice. This side faces the road along West Michigan Avenue on the west side of Morocco. The Scott-Lucas House is in the background.

A display table filled with photos and memorabilia of Sam Rice also featured a 1920s-era baseball glove and time-worn baseball. The display was moved to the Morocco Library following the Indiana State Historical Marker dedication Saturday at the Scott-Lucas House.

MOROCCO – The roadside historical marker dedication in Morocco had all the makings of a day at the ballpark.

There was the smell of freshly popped popcorn and hot dogs in the air. There were dozens of folks milling around, chatting it up while awaiting the start of ceremonies, much like baseball fans rooting for their favorite team and anticipating the emergence from the dugout of their favorite player.

But unlike a baseball game, not even a burst of heavy rain during the May 25 ceremony dampened spirits or caused a delay. It was going to happen, rain or shine.

In Morocco, there’s no doubt about their favorite player’s identity. He was a man who suffered a horrific family tragedy and rose to stardom in an era full of flamboyant personalities.

Life dealt him a high and tight pitch, knocking him to the ground. But he dusted himself off, in true baseball fashion, and amassed a smash-hit 20-year career filled with dependability and consistency that led him to enshrinement in the National Baseball Hall of Fame in Cooperstown, N.Y.

“I first learned about the story of Sam Rice in a Sports Illustrated article,’” said Bob Gonczy, president of the Morocco Town Council, during Saturday’s state historical marker dedication ceremony at the Scott-Lucas House. “His incredible journey and personal story of picking up the pieces of his life, overcoming the odds and making something of himself and achieving greatness is as American as small towns, apple pie and, frankly, baseball.”

The marker is the first for Newton County, which prior to Saturday had been one of four in Indiana that did not have one. One had been erected in 1966 on US 24 at the Indiana-Illinois state line a few miles west of Morocco. It commemorated the state line survey of 1821, but it disappeared – no one knows when or by what means – and it hasn’t been seen since.

Tim Myers, director of the Newton County Economic Development Commission, has been a longtime fan of Rice, who was born in Morocco in 1890 and played for the Washington Senators from 1915-1933 (he missed the 1918 season due to his World War I military service). Rice ended his career in 1934 after only one season with the Cleveland Indians.

“This one is kind of my passion,” he said. “It’s kind of cool that this ended up being the first marker that we did.”

Inside the Scott-Lucas House was a display featuring photographs, baseball cards, an oil painting and other memorabilia from Myers’ personal collection. There was even an early 1900s baseball glove (not Rice’s) and a baseball Myers polished to make it look much older than its 30 years.

Rice didn’t start playing professional baseball until his mid-20s. He had tried out for ballclubs in Watseka, Ill., and Galesburg, Ill., but was deemed not talented enough to make those squads. But it was the tryout with the Galesburg team that ultimately changed – and probably saved – his life.

During that tryout in April 1912 – a little more than a week after the Titanic sank – Rice, who lived in Watseka at the time, traveled to the tryout while his wife, Beulah, and two children, Bernie, 3, and Ethel, 18 months, went to visit Sam’s parents and sisters in Morocco. After a day of visiting friends in nearby Iroquois, Ill., the Rices returned to their Morocco farm.

At about 6:30 p.m. that day — April 21, 1921 — an F4 tornado (wind speeds of 207-260 mph) carved a path from Crescent City, Ill., and through the Rice family farm. The twister killed Rice’s wife and two children, along with his mother, two sisters and a farmhand. Rice’s father passed away a few days later.

Sam Rice’s entire family was wiped out in a matter of minutes. He never spoke of it to anyone — not sportswriters, not fellow ballplayers, not even his two subsequent wives. He never had any more children of his own. In fact, Rice’s personal tragedy didn’t come to light until that Sports Illustrated story Gonczy mentioned in his ceremony remarks.

Purdue professor looks back to Perseverance’s first year on Mars

Titled “The Secrets of Sam: Hall of Famer Sam Rice came out of nowhere to play rightfield for the Washington Senators. But where was nowhere?” author Steve Wulf revealed that a 1984 story by John Yost of the Newton County Enterprise detailed the Rice family tragedy. Yost was the first person to have uncovered Rice’s unknown past. Rice had passed away 10 years prior to the story’s publication.

Oh, and there’s also the controversy over a catch he made — or did he? — during the 1925 World Series against the Pittsburgh Pirates.

As the story goes from news reports of the time, Rice chased a flyball off the bat of Pirates catcher Earl Smith, leaped and made a backhanded catch near the fence. Rice then tumbled over a 4-foot-high fence and disappeared into the crowd. He emerged moments later with the ball in his glove. Some people said he caught it, others said he didn’t. Umpires ruled it a catch and the play stood.

Rice penned a letter prior to his hall of fame induction with instructions not to open it until after his death. It supposedly revealed the “truth” about the play. In that letter, he described the play and wrote, “At no time did I lose possession of the ball.” That letter is currently in Cooperstown.

For Myers, his failure to reach 3,000 hits and still make the Hall of Fame is what stands out most.

“The thing I think is so cool, not only about the tornado and the family thing, and carrying that burden and never talking about it, is the fact that he had 2,987 hits. When he retired, I think there were only six or seven guys in baseball that had 3,000 hits. That was it. Nowadays if someone got that close, they would be given every opportunity to get 3,000. In those days, no one crunched those numbers or did that stuff. He’s always going to be the guy closest to 3,000 that didn’t make it.”

According to dcbaseballhistory.com, Rice was given an opportunity by Senators team owner Clark Griffith to return and achieve the 3,000-hit benchmark, but Rice declined the offer.

“He was a completely different kind of ballplayer — he had the defense, the speed and hit for average — he still played in the same era as Babe Ruth, Lou Gehrig and those great (New York) Yankee teams,” Myers said. “That’s another thing that’s kind of cool – for the Washington Senators to have won the American League pennant in 1924 and ’25, that was right in the heart of all those great Yankees teams. (The Senators) upset them in those two years to win the pennant.”

Getting the marker ready for Saturday was the culmination of a year-long process for Myers, Morocco and Newton County in working with the Indiana Historical Society. The director of the marker program, Casey Pfeiffer, personally took on the research for the Rice marker to verify facts and get things lined up for the marker installation.

“This is exciting for me because, not only is this Newton County’s first historical marker, but also as a baseball fan to be able to do the research on this,” she said. “As someone from Cleveland and Sam Rice playing his last year there, it was extra special as well.

“Sam Rice was an incredible player and he led an incredible life. He wasn’t a power hitter, he wasn’t a flashy player, but he was reliable, consistent and an amazing contact hitter.”

The Sam Rice marker is the first of three planned this year in New County. Two more will be dedicated in June and September, respectively, Myers said. He has spearheaded the project in getting markers in Newton County.

The other two will honor Indiana’s 30th governor, Warren T. McCray, at Al Cast Park in Kentland; the other will recognize William Howard Taft’s Presidential campaign kickoff at Hazelden, the home of noted author, humorist and playwright George Ade.