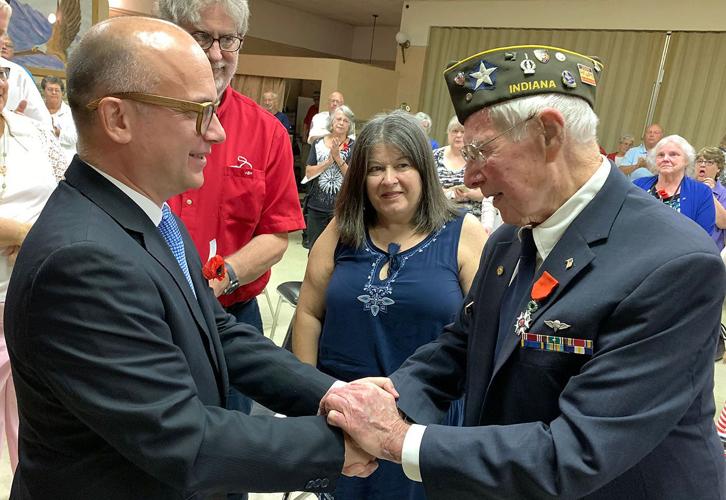 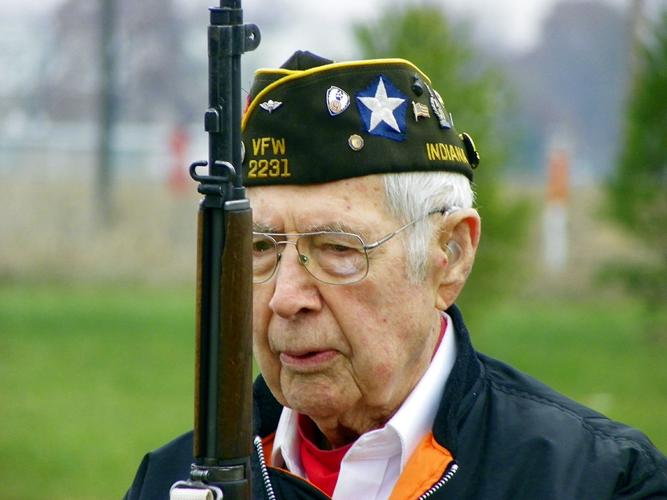 Tom Goffe participates in the Monticello Veterans Honor Guard in this undated photo. 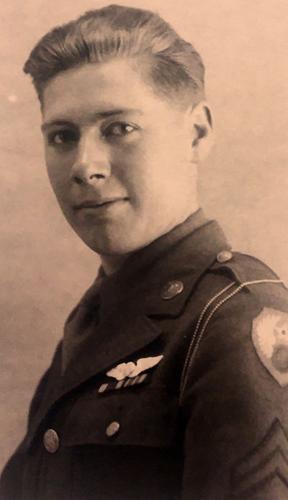 Tom Goffe participates in the Monticello Veterans Honor Guard in this undated photo.

MONTICELLO — Tom Goffe periodically became teary eyed during a ceremony June 18 that honored him as a recipient of the Legion of Honor for his military service in France during World War II.

A parachute rigger who now lives in Monticello, Goffe proudly stood as Guillaume Lacroix, consul general of France to the Midwest based in Chicago, pinned the medal on the left lapel of his blue suit jacket.

“You participated in five major campaigns,” Lacroix said. “One would be enough to deserve this award.”

Lacroix made certain to let Goffe know that French President Emmanuel Macron “took the very personal position to confer this award” to him.

The Legion of Honor is the highest French decoration — military and civilian — and one of the most famous in the world. Goff received the Chevalier de la Légion d’Honneur — Knight of the Legion of Honor — one of five degrees of distinction usually reserved for French nationals and foreigners who have served France. It was first created, according to the Grande Chancellerie de la Légion d’Honneur, in 1802 by Napoleon Bonaparte.

Goffe’s third wife, Marion, was responsible for contacting the French government about presenting the Legion of Honor to her husband before she passed away in December 2020.

After receiving the medal, Goffe took to the podium to express his gratitude.

“I am very humbled to receive this prestigious Legion of Honor medal,” he said, before shedding a few tears. “I’d like to accept this medal in honor of the 71st Squadron, 434th Troop Carrier Group with whom I served during World War II. They all had a hand in this. It took all of us working together.”

Goffe was born June 19, 1923, in Oxfordshire County, England, and moved with his family to the United States when he was 6 years old to manage a farm near Valparaiso in Porter County.

Goffe graduated from high school in 1942 and was drafted into the US Army in February 1943. He took on parachute rigging training at now-decommissioned Chanute Field in Rantoul, Ill., and was assigned to the 434th Troop Carrier Group near Alliance, Neb.¬¬

He and the 434th later traveled to New York and took passage on the Queen Mary bound for Great Britain. There, Goffe and his fellow troops began preparing for exercises leading up to the Normandy Invasion.

INDOT considers roundabout at I-65 and SR 10

Goffe’s job involved responsibility for parachutes and all life-saving equipment supporting C-47 crewmembers. He was given a citation from the group for his efforts in supporting 132 powered aircraft and 132 glider sorties from June 5-7, 1944.

Goffe also participated in halting the German offensive at Ardennes in relief of the troops on the ground in Bastogne.

After Allied forces secured France in March 1945, Cpl. Tom Goffe was sent to Mourmelon, France, to provide fuel for troops advancing through Germany. He accompanied the transport to help unload it at the final destination — more than one million gallons of gasoline during April 1945.

During his service, Goffe earned several medals, including a Silver Star for being in five campaigns with American forces. His other medals are: EAME Theater Medal, Good Conduct Medal, Distinguished Unit Badge, and the World War II Victory Medal.

He also received a letter from President Harry Truman thanking him for his service.

After the war, Goffe became an architectural draftsman for Walter Scholer & Associates and designed numerous courthouses and hospitals.

After 24 years, Goffe took a job with Hamster Builders in Wheatfield. One of the projects involved drawings for Hook’s Drug stores across Indiana.

In 1997, Goffe served in the Monticello Veterans Honor Guard for more than 20 years and said he enjoyed firing the M-1 carbine during 21-gun salutes. He had to give up the Honor Guard in 2019 because of a back injury.

Goffe celebrated his 98th birthday on June 19 — the day after the medal ceremony at American Legion Post 81 — with a combined congratulatory/happy birthday cake for him.

“God had a chance to take me a couple of times (previously) but he wanted me to keep going,” he said. “God bless you all.”