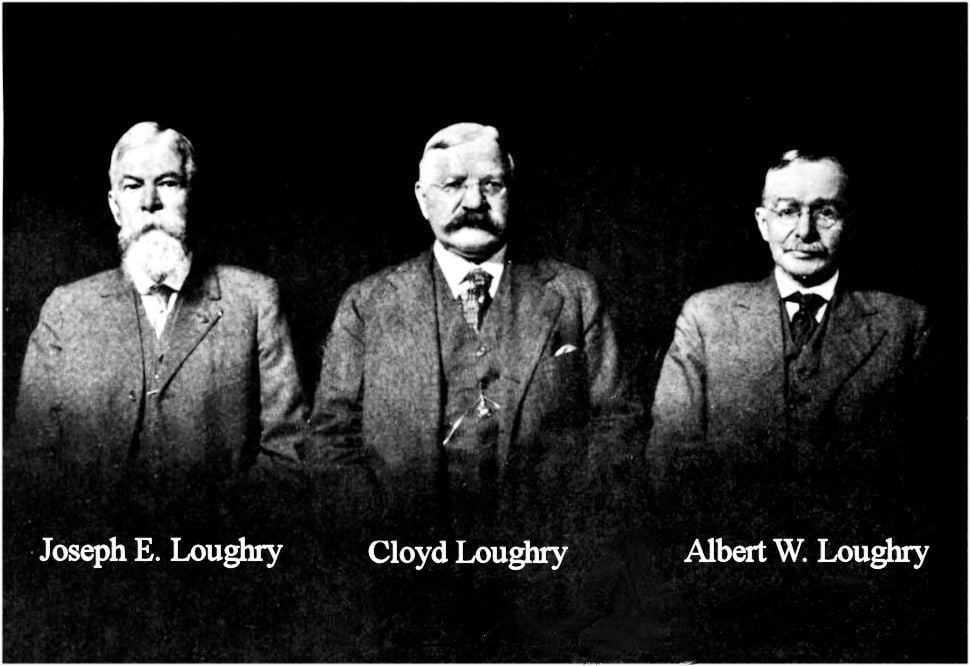 Two weeks ago we detailed the 1889 construction of the large modern flour mill located on North Main Street in Monticello. At the time, this was called the Monticello Mills; however, in Monticello it was always referred to as the Loughry Brothers Mill.

Nothing on this scale of manufacturing had ever been built in Monticello. Last week we explored the training the Loughry family had in the milling business at Cooper’s Mill.

This week we will take a closer look at the Loughry family’s rise to success.

The White County patriarch of the Loughry family was Nelson B. Loughry. He was known in the county as N.B. Loughry. Mr. Loughry was born in 1815 in Indiana County, Pa.; however, his grandfather, William Loughry, immigrated to the United States from Northern Ireland about 1780.

William would settle in Pennsylvania. William’s son, Joseph, was a farmer and also served as county sheriff in Indiana County. Joseph’s only child was Nelson.

At the age of 12, his parents moved to Blairsville, Pa., where Nelson received the greater part of his education. At the age of 14, he was sent alone to Philadelphia to purchase a stock of goods, which he did, displaying rare business qualities in one so young.

On Nov. 13, 1838, he married Miss Rachel Wright. After a few months living at his father’s house, the newlywed couple moved to Saltsburg, Pa., where they lived for five years. It was here that Nelson engaged in his first mercantile business.

In 1844, they moved back to Blairsville, where Nelson continued his business until he was elected Indiana County clerk. His duties as clerk required him to move to the county seat, where he served for three years.

Nelson was engaged in all public matters, especially politics. He cast his first vote with the Whig Party in 1836; but on the organization of the Republican Party, he joined its ranks. In 1855, Nelson moved to Lafayette and from there moved to White County in 1859.

The family resided in Monon Township until 1872, where Nelson was engaged in different pursuits including working at Cooper’s Mill just outside of Monon. Nelson learned the milling trade while working at this mill.

In April 1872, Nelson traded their farm as partial payment for the old grist mill on the banks for the Tippecanoe, constructed in 1850-51, and moved to Monticello.

The old grist mill, at that time, only had a capacity of about 75 barrels per day and needed many improvements to make it a first-class operation. The Loughrys were unknown in Monticello. They were laden with heavy debt by purchasing of the old mill and they had no credit to boot.

The transition to becoming millers proved to be a constant struggle against financial oblivion. Nelson and his sons attended the business with an attitude of “all hands on deck.”

The Loughry’s worked the business as though each day could be their last. Nelson managed the financial part. With the prior milling experience of his son, Joseph, as an efficient miller, coupled with the invaluable assistance of the other two sons, Albert and Cloyd, they would not only survive, but thrive.

The sibling triad would begin running 24 hours a day. The old mill employed 13 hands, including three experienced millers. The old mill became a “mixed mill,” operating both stone and rollers for processing grains. It is one of the best improvements known to the business.

The changes in the old mill increased the capacity to 150 barrels per day. The Loughry team would process wheat into flour with annual output of 125,000 bushels of wheat per annum.

The Loughry’s not only supplied local demand with their product, but they also shipped large quantities to Great Britain. The quality of Loughry flour exceeded any mill in Indiana.

The head miller was Frank P. Berkey, who began working for the Loughry family at age 19, shortly after they obtained possession of the old grist mill. Frank held the head miller position for 30 years.

The success of Loughry’s Mill was a direct result of Berkey’s faithful performance of his duties. The Loughry family held Frank in high esteem and acknowledged his contribution continually.

Berkey died in 1914 at age 61 and is buried in the Old Monticello Cemetery.

In addition to the Loughry’s milling interests, they also owned and operated a furniture factory directly opposite the old grist mill as well as a furniture store in downtown Monticello.

Nelson, the family progenitor, died in August 1890 in Monticello. He had retired years before his death and turned the milling business over to his three sons. Nelson suffered from asthmatic issues and he knew years prior to his death he would succumb to the affliction.

In his final days, his ultimate death was a result of a series of complications and during his last days he was unconscious. Nelson died at age 76 and is buried in the old Monticello Cemetery.

Joseph E. Loughry, the eldest son, was born Sept. 4, 1842, in Saltsburg, Pa. He received a good practical education in his youth, and while residing in Lafayette he attended the local high school of that city.

On Aug. 11, 1862, Joseph enlisted in Company D 12th Indiana Volunteers, but instead of going with the regiment to the front, he was detailed on recruiting duty. He thus happily escaped being made prisoner, which disaster overtook his company at the battle of Richmond, Ky.

In November 1862, after the parole and exchange of the prisoners, Loughry and the company of which he was a member, were sent to Memphis, Tenn., where it remained that winter doing guard duty, etc.

In June 1863, the company was ordered to assist the troops under Gen. Ulysses S. Grant in the immediate vicinity of Vicksburg. On the evening of July 4, after the city surrendered, the troops made a forced march to Jackson. After the reduction of that city, they returned and wintered near Vicksburg.

Joseph Loughry participated in the battle of Mission Ridge, where he was wounded in the right leg. The injury was not sufficiently severe enough to keep him from active duty. After this engagement, they were ordered to Burnside’s relief at Knoxville.

At the battle of Atlanta, he was a member of the body of troops which repelled the charge in which gallant Gen. James Birdseye McPherson was killed. The memorable march to the sea was the succeeding movement, and the Twelfth Regiment was the first to enter Columbia, S.C.

From Columbia, they went to Richmond, Va., via Raleigh, N.C., and from there to Washington, D.C., where the Twelfth Indiana Volunteers headed the grand review of the Army of the West.

Joseph was discharged June 9, 1865, and from the time of his enlistment to his discharge he never lost a day from service, never missed a campaign or battle in which his regiment was engaged.

After the war, he took a thorough course in Bryant & Stratton Business College in Indianapolis, after which he was engaged in milling in Monon and Attica until he came to Monticello.

Nelson’s middle son, Albert Wright Loughry, was born June 9, 1847, in Indiana County. Albert came with his parents to Indiana, where he received an ordinary education in his earlier years. Albert and his commitment to the grist mill made him one of its best workers.

On May 3, 1881, Albert married Miss Sallie Kendall, daughter of Charles W. Kendall. It is somewhat coincidental that C.W. Kendall was the principal man behind the early years of the Norway milling operations. The union of Albert and Sallie produced one son, Howard.

Nelson’s son, Cloyd, never married and from the lack of articles in area newspapers, he kept out of the limelight. Cloyd would live longer than any of the other brothers and took the helm of the flour mill.

Cloyd died in 1927. Nelson, Joseph, Albert and Cloyd Loughry and their wives are all buried in the old Monticello Cemetery.

Those reading this column would agree this legacy was not accidental.