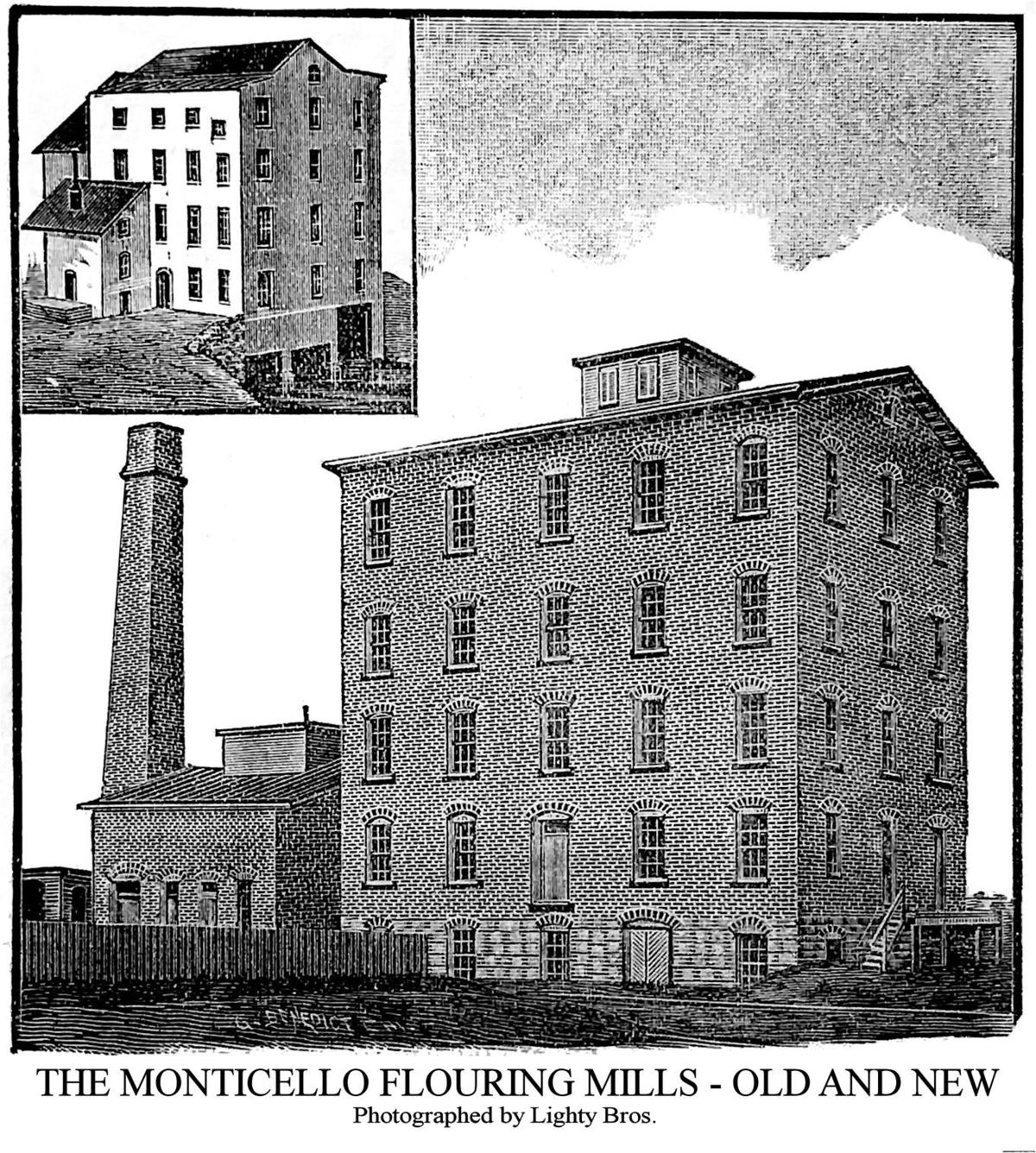 The small picture is the lithograph of the old mill and the large one is of the new mill.

The small picture is the lithograph of the old mill and the large one is of the new mill.

The location of the Olde Mill Apartments symbolizes perhaps the site of the most modern enterprise ever built in Monticello.

Prior to an all new super-sized flour mill built on the site of the Olde Mill Apartments, all Monticello grain was ground on the banks of the Tippecanoe at the old grist mill that was powered by the Magee Dam. This early mill was completed in 1850-51.

In 1872, the Loughry family purchased the mill and made several upgrades. The Loughrys will forever be associated with milling in White County history. This large mill stood on North Main Street just north of the railroad tracks.

The construction of the new Loughry mill began in 1888 and was completed in February 1889. The location of the old mill along the banks or the Tippecanoe had the disadvantage of having to transport finished mill products up the hill on St. Mary’s Avenue, then hand-load the barrels of flour onto trains. This is what led to an up-town site where the East-West Railroad lines were located.

The Loughry Mill was but a few feet away. Later, a spur was located next to the mill and a loading dock was added. This was the most valuable asset ever constructed in Monticello.

The Loughrys sought the most competent milling engineers in the U.S. to build their new mill. They secured Col. Charles Winn, of Chicago. He designed the largest mills throughout the nation.

His last assignment was the “Texas Star” mill at Galveston, Texas, which, according to the American Miller magazine, was the most perfect milling property on the continent. The execution of his plans by his foreman, Mr. A.W. Davidson, of Chicago, proved the design was flawless.

The first test of the mill occurred on Tuesday, Feb. 12, 1889. The results were astounding. Not a shaft, wheel, spout, belt, cloth or other fixture throughout the mill required the slightest change. Everything worked perfectly. Credit was given to Davidson for the precision of pre-adjusting the machinery.

The limestone courthouse had not been built, nor had the standpipe on North Bluff Street. So, at the time, this was the tallest structure in Monticello. This new building had to be the pride and joy of Monticello.

Let’s start at the basement and give some details of what was on each floor. The basement had a 14-foot ceiling and a cement floor. The basement is where all grain from local farmer’s wagons or from railroad cars headed. On the north side were storage bins that would hold 2,500 bushels of wheat. The bins were arranged so the grain elevators could lift the grain to any of the departments on the upper floors.

The elevators that carried the grain to the top floors had their footers in the basement. The basement also housed lines of shafting that powered the mechanisms on the floor above. The shafting was supported by cast iron columns. The shafts could be raised or lowered by screws to accommodate the tension or type of grain that was to be milled.

The first floor was known as the roller floor. There were seven rollers that were 10 inches in diameter and varied in length from 24 to 36 inches. The rollers reduced the wheat to flour. This area was all finely finished, trimmed in walnut and all screwed together. This floor also housed the scales for weighing grain and included three flour packers. The office was also located on the northeast corner of this floor and was separated from the rest of the room by glass partitions.

The second story had no machinery except for a flour packer for low-grade flour and a set of automatic scales that calculated the number of pounds and did not require people to keep track of it.

The north side of the floor was occupied by bins for wheat and for bins that supplied the packers. On the south side were a series of elevators and spouts that led to the roller machines below. Overhead was the shafting for driving the machinery on the third floor.

The third story housed additional bins for the various products produced at the mill, including the stock hoppers that were over the first break rollers. The greater part of the floor space was taken up by machinery. There were 10 Johnathan Mills bolting reels, a double purifier as well as shafting for driving the machinery on this floor.

The fourth floor had a 19-foot ceiling. On this story there were 12 more Jonathan Mills bolting reels, two centrifugals, separators, a double purifier and dust collector. A partition on this floor ran the full length of the building.

The north side was for wheat and wheat-cleaning machinery along with a dust collector system. Here you would find conveyors for wheat that were used to send the product to where it was packaged for shipment.

One has to ask how all this magic machinery was powered?

To the west was a small detached building that housed a boiler room that was 16 feet long and more than five feet in diameter. The boiler had all the accoutrements of today’s boilers, which included steam gauges, glass water gauges and an automatic skimmer that kept the water clean.

Above the boiler was a huge water storage tank that supplied abundant water for the boiler when needed or when additional power was needed for the mill. The boiler powered steam to a Noyes 120-horsepower engine that powered the mill. The Monticello Herald reported that this steam engine was as quiet as a sewing machine.

In the same area as the engine were two sets of water pumps that could divert the water in the boiler to heat the plant through an underground steam pipe. The heat was provided in the plant by the old-style cast iron radiators only much larger in size. The pumps also provided fire protection for the mill itself.

The engineer for the boiler and engine was William A. Hardy. He was a true engineer by instinct and education. Hardy would later carry the moniker of the “Izaak White of the Tippecanoe” as a result of his fishing prowess. Later in life, Hardy was the engineer at the water plant.

The new mill was staffed by the same force of men that were at the old mill on the Tippecanoe. The head miller was Frank Berkey and other employees included Jacob Schilt, Ed Douglas, John Cohee, Joe Williams and George Hanaway. With this workforce, the mill produced 250 to 300 barrels of flour a day. The investment in the new mill was put at $50,000.

The Loughry family truly represented the entrepreneurial spirit of Monticello. It was this same spirit that enabled Monticello to grow. People would point their finger at this mill and become inspired to grow the area with more manufacturing complexes over the next 30 years. It was during this 30-year period that Monticello became known as a business-friendly community.

Perhaps in a later column we will explore the patriarch, Nelson B. Loughry, and his sons.

Mostly cloudy. A stray shower or thunderstorm is possible. High around 60F. Winds N at 5 to 10 mph.