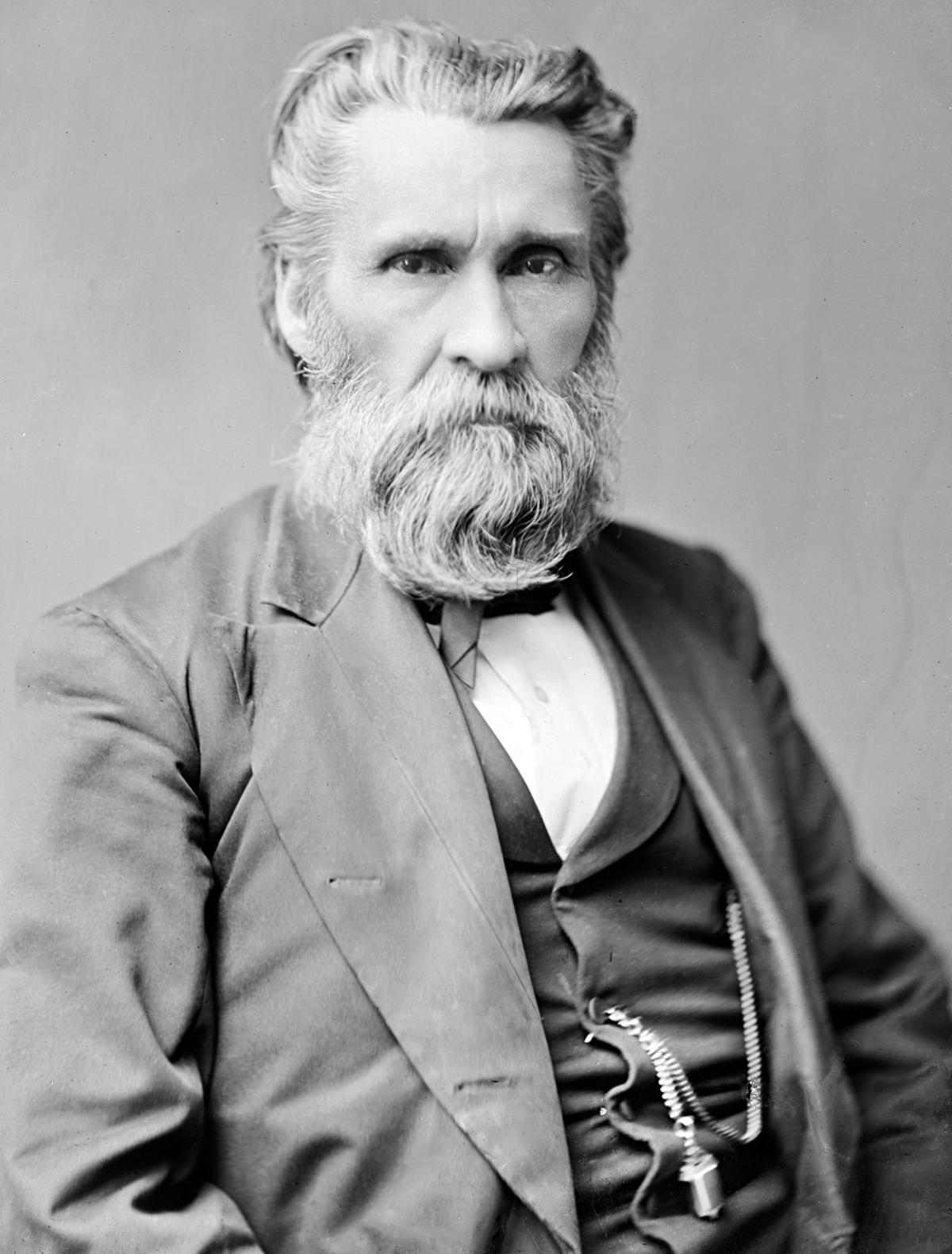 This 1852 advertisement in the Prairie Chieftain informs readers of Dr. Haymond’s new practice in Monticello House.

This February 1852 ad informs Monticello readers that Dr. Haymond has relocated his office in the southeast corner office in the newly constructed brick courthouse. 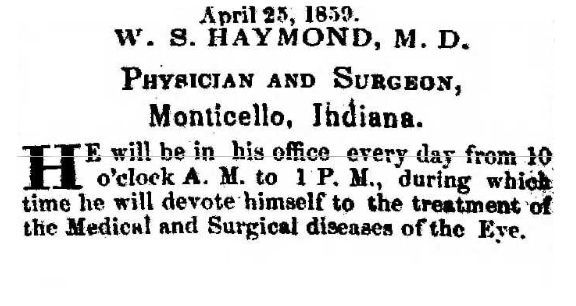 An 1859 advertisement for Dr. Haymond as specializing in diseases of the eye.

This advertisement announces the opening of Dr. Haymond’s office in Indianapolis, circa November 1977.

This 1852 advertisement in the Prairie Chieftain informs readers of Dr. Haymond’s new practice in Monticello House.

This February 1852 ad informs Monticello readers that Dr. Haymond has relocated his office in the southeast corner office in the newly constructed brick courthouse.

An 1859 advertisement for Dr. Haymond as specializing in diseases of the eye.

This advertisement announces the opening of Dr. Haymond’s office in Indianapolis, circa November 1977.

Today’s column centers around a man known throughout Indiana. His name was William Summerville Haymond.

Haymond attended the common schools and went on to graduate from Bellevue Hospital Medical College in New York City. Later he attended Cincinnati College of Medicine. He began his medical practice in 1852 in Monticello.

Upon arrival in town, he set up his practice at the Monticello House. The Monticello House was formerly the hotel owned by Rowland Hughes for many years. Mr. Hughes had renamed the hostelry to the “Farmer’s Hotel.” Hughes sold the hotel to Okey S. Johnson but he would die at age 41 in May 1851.

When Dr. Haymond arrived it was operated by Okey’s wife, Rebecca. The location of Monticello House was at the northwest corner of Harrison and Main where Hatter-Hanni Insurance is today.

Shortly after his arrival, Haymond was involved in community events in Monticello. Every year, local residents found Dr. Haymond either a speaker or organizer for the Fourth of July celebration.

An article from 1852 printed in the Prairie Chieftain noted that Dr. Haymond was a member of the Whig Party. With the rise of the Republican Party, he joined their ranks and later in life was a confirmed Democrat.

By 1859, Dr. Haymond began specializing in diseases of the eye. In December 1861, Dr. Haymond placed his books, notes and accounts in the hands of Judge David Turpie for collection. No, he didn’t quit being a physician, rather he joined the Union Army where he became the assistant surgeon for the Indiana 46th Regiment.

During his absence, Haymond recruited a young doctor named John H. Blackwell to handle his patients. Dr. Haymond served one year and returned to Monticello, where he restarted his practice.

Shortly after his return to Monticello in broken health, he called for a meeting of White County doctors to form the White County Medical Society. At the time, eight physicians met at his office in Monticello. Dr. Haymond was elected president.

Dr. Haymond was an early proponent of the Indiana, Delphi and Chicago Railroad. His involvement along with others from White County wanted that railroad.

Dr. Haymond was outspoken on the subject and traveled throughout the area educating people on what this proposed rail line would mean. In 1872, Dr. Haymond, Joseph Rothrock and J.C. Reynolds were directors for the I.D.C. for the county. This rail line, nicknamed the Air Line, would allow freight and passengers to travel between Indianapolis and Chicago in record time.

This would be a boon to Monticello and Monon. Dr. Haymond would end up being president of the I.D.C. from 1872–1874. The Air Line was what we refer to today as the Monon Railroad.

William Hamelle, who put together the 1915 History of White County, noted; “In 1874, Dr. Haymond received, without solicitation, the unanimous nomination to Congress from the Tenth District and was subsequently elected. Counties represented were Carroll, Jasper, LaPorte, Lake, Newton, Porter, Pulaski, St. Joseph and White. The good doctor was the first Democratic victory in twenty-two years. Dr. Haymond was nominated again for Congress in 1876.”

The doctor, while performing an amputation on a gangrene limb of a patient, contracted a disease that almost ended his life. Dr. Haymond was probably infected with sepsis. The result of the election put Republican Major W.H. Calkins the victor by 1,148 votes. Had Dr. Haymond been well enough to caucus and engage with the voting public, he probably would have won by a significant plurality.

During Haymond’s time in Congress, he gained the reputation of being one of the most widely informed men. He was a member of the Committee on Banking and Currency, which, at that time in the United States, was tumultuous and brilliant men like Haymond were needed for the stability of the country.

An article in an Indianapolis paper noted that on one occasion, one of the congressmen went to Speaker Cox to consult him about some national financial matter. Cox stated, “You go and see Haymond; he knows more about finance than any man on the committee.”

Hamelle, in the 1915 White County History noted, “The doctor was endowed with a rare executive ability and as an organizer he had few superiors. In deportment, he was modest, suave and rather reticent; but his social skills were pleasant and last to those who made his acquaintance.”

In January 1877, Dr. Haymond sold his home and real estate in Monticello and opted to live in Indianapolis, where he opened his medical practice in the Baldwin Block.

In 1878, Dr. Haymond became president of a new enterprise. The firm was known as the United States Land and Emigration Company. This company encouraged foreigners to come to this country. The article on this company noted that every man or woman who comes to the United States was worth more to our country than a thousand dollars in gold.

In 1879, Dr. Haymond published “Illustrated History of the State of Indiana”. This 798-page hardcover book is profusely illustrated. I wish more had been written about White County.

Also in 1879, Dr. Haymond was instrumental in establishing the Central College of Physicians and Surgeons in Indianapolis. The doctor would be a professor and dean of the college until his death in Indianapolis on Dec. 24, 1885, at the age of 61. Dr. Haymond is buried in Crown Hill Cemetery.

No matter how you slice it, Dr. Haymond was not an ordinary man. He was a man of high intellect, a perfectionist in his profession, an organizer of men and a visionary on the importance of the railroads.

The doctor was not only prominent in White County but was well respected throughout the country. Few men can meet the standard that he set during his lifetime.