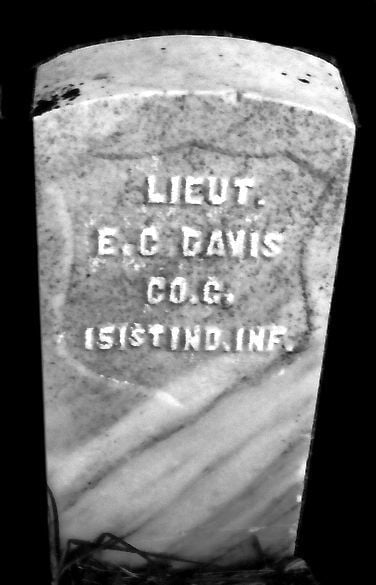 The tombstone of convicted killer and 1st Lt. Elijah C. Davis in Bunnell Cemetery in Reynolds. 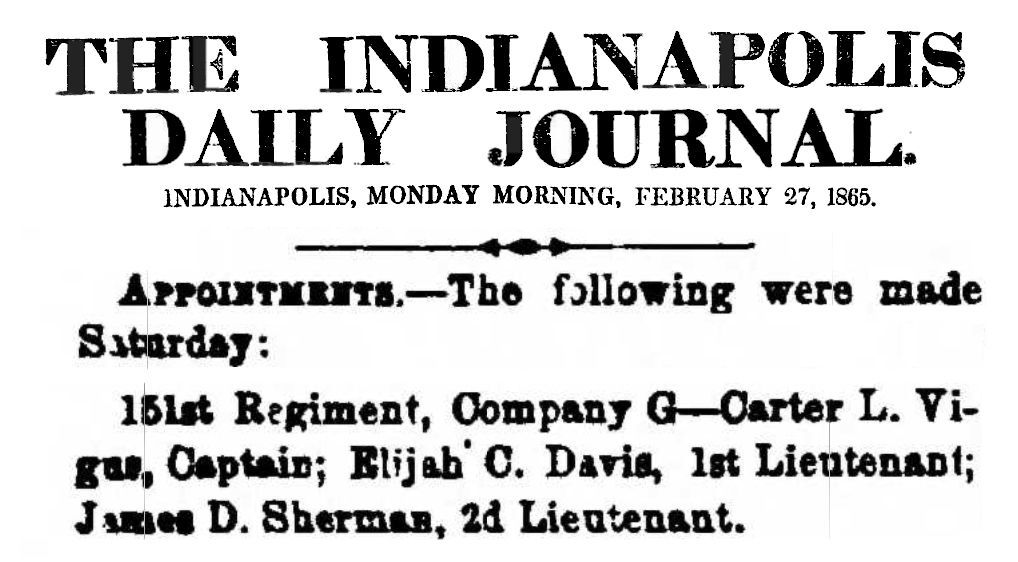 Confirmation of Elijah C. Davis being in the 151st Regiment, Company G, as a 1st lieutenant.

The tombstone of convicted killer and 1st Lt. Elijah C. Davis in Bunnell Cemetery in Reynolds.

Confirmation of Elijah C. Davis being in the 151st Regiment, Company G, as a 1st lieutenant.

Today’s column, like several that I have on file, isn’t exactly as complete as I would like. What you are about to read focuses on an interesting murder in Reynolds.

The main character is Elijah C. Davis. He was born in in 1834 Pickaway County, Ohio, the son of John Davis; his mother is unknown.

The Indianapolis Journal of Sept. 14, 1868, printed an article about Elijah C. Davis. It seems he was in the crosshairs of the Circuit Court of White County. Davis was arrested on murder charges that occurred in March 1868.

The article noted that Davis and a gang of ruthless robbers, extortionist and general ruffians had long been terrors to the Reynolds community. He was suspected of being involved in several murders in the area, along with arson and counterfeiting. In September, he was brought to trial under the auspices of Judge Charles H. Test, of Princeton Township, who had Davis in court on two indictments.

A grand jury looked at the facts in the case and were also looking into other charges. It seems there was a small band of hooligans that would meet at the railroad junction in Reynolds for the purpose of planning various robberies, but law enforcement officials were unsuccessful in bringing eyewitnesses to testify against the gang.

Other witnesses either just kept quite or moved away. The prosecutors opted to keep the charges separate. The Decker case had much stronger evidence and was moved forward to the courts.

So what was all this over that could possibly justify the murder of Decker? One could possibly understand certain instances where rage overcomes rational thought, but this was not the case. This murder was the result of sheer politics.

Davis claimed that he was a Republican; however, during the previous year’s election, he sold out the Republican Party and the gang had swung the election of two Democrats. Apparently Davis wanted to cover his tracks and treachery of the election and killed Decker to silence him.

Once the story of the murder came out, the area people sided along party lines as to whether Davis was innocent or guilty. Now this is taking politics to the limits.

Both parties agreed that Davis was a terror to the area and that if he hanged for the murder, the county would be better off. The prosecutor being absent, Mr. Justice, his deputy, secured the Hon. William Wilson to assist with the prosecution. Local defense attorneys were Gridley and Reynolds.

The Indianapolis Journal newspaper stated that:

“Davis was well built, hearty and was about thirty-four years in age. His hair was light brown and he sported a genteel moustache and chin whiskers that were a couple of shades darker. At the trial, Davis was well dressed, fitted in a nut brown vest and pants and a suit coat which was striped. His overcoat was black. His shirt was clean, buttoned tightly around his neck, but had no collar to finish it off. His head is large and well formed, but his face is flush and betrays that the man is addicted to either drugs, alcohol, or both. On the whole, if we had met the prisoner on the street without knowing who he was, we would take him for a butcher by trade.”

Davis somehow, somewhere went off the track. Perhaps his service in the Civil War had something to do with his derailment. In June 1863, Indiana Gov. Oliver P. Morton asked the counties in Indiana for an additional 100,000 men for the war effort. Davis, Joseph W. Davis and Isaac H. Jackson enlisted a full company of men from White County.

This company was organized at Lafayette and entered service as Company K of the 116th Regiment. The men of the company elected Davis as captain. The regiment really didn’t see any heavy action during the war. After the six-month stint in the 116th, Davis joined the 151st Indiana Regiment and was promoted to lieutenant.

One would like to think that his Civil War service resulted in his disregard for the sanctity of life, but this does not appear to be the case.

Her testimony revealed that on the night Davis murdered Decker, the two men had been playing cards and drinking together as friends. She stated that Davis and Decker began quarreling and Decker went back to his room in the boarding house for his clothes. Mrs. Doolittle then heard a scuffle. When she opened the door to the room, she saw Davis standing with a pistol leveled at the back of Decker’s head, saw the flash and sound of the pistol, and saw Decker fall. Decker struggled for about 15 minutes before dying on the floor.

Davis then wrapped the corpse in a bed quilt, carried it downstairs and buried him in a nearby woods. Davis told Mrs. Doolittle where he had buried the murdered man and she later went to see where the grave was located.

At the trial, justice was swift. After hearing the testimony in the case, the jury in no time found Davis guilty of the murder of Decker. Davis was sentenced to life imprisonment in Michigan City.

Davis didn’t last long in prison. He died March 12, 1869, while in the Michigan City Jail. His body was brought back to Reynolds and was buried in Bunnell Cemetery. His headstone is one that was provided by the federal government for Civil War veterans.

You will notice that I posted the newspaper article about Davis’ appointment as 1st lieutenant of the 151st in Company G. This record is the only one I found that specifically states he was a member of the 151st.

While one would assume that Davis’ burial in Bunnell Cemetery is one and the same as Elijah C. Davis, historians don’t make assumptions. This article proves that we have one and the same man.

The second note is why I love newspapers. Newspapers for 1868 and 1869 for White County did not survive. This murder would have made front page news in the county. This is what happens when newspapers get destroyed, displaced or not archived. Part of this history is now lost to the ages.

Intervals of clouds and sunshine. High near 55F. Winds WSW at 5 to 10 mph.