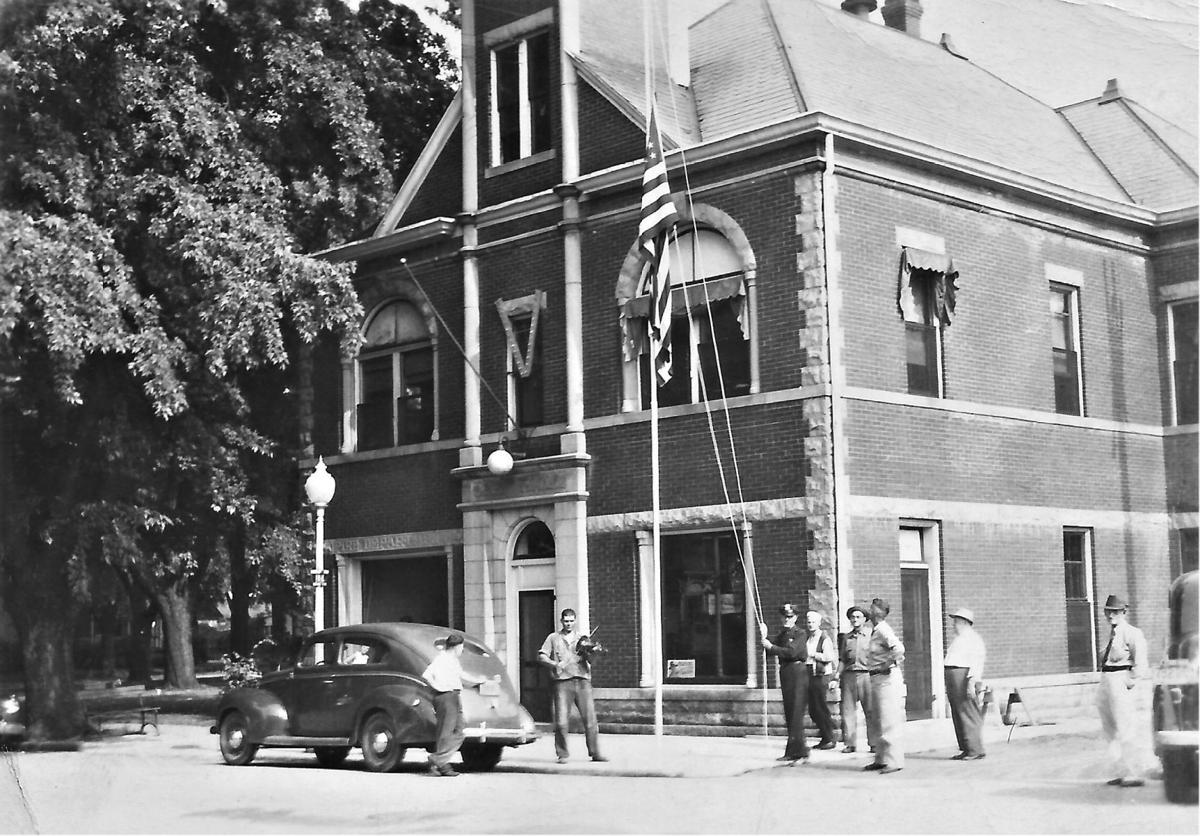 Monticello’s City Hall as it appeared in the 1940s. The man holding a violin is Walt Wandrel. 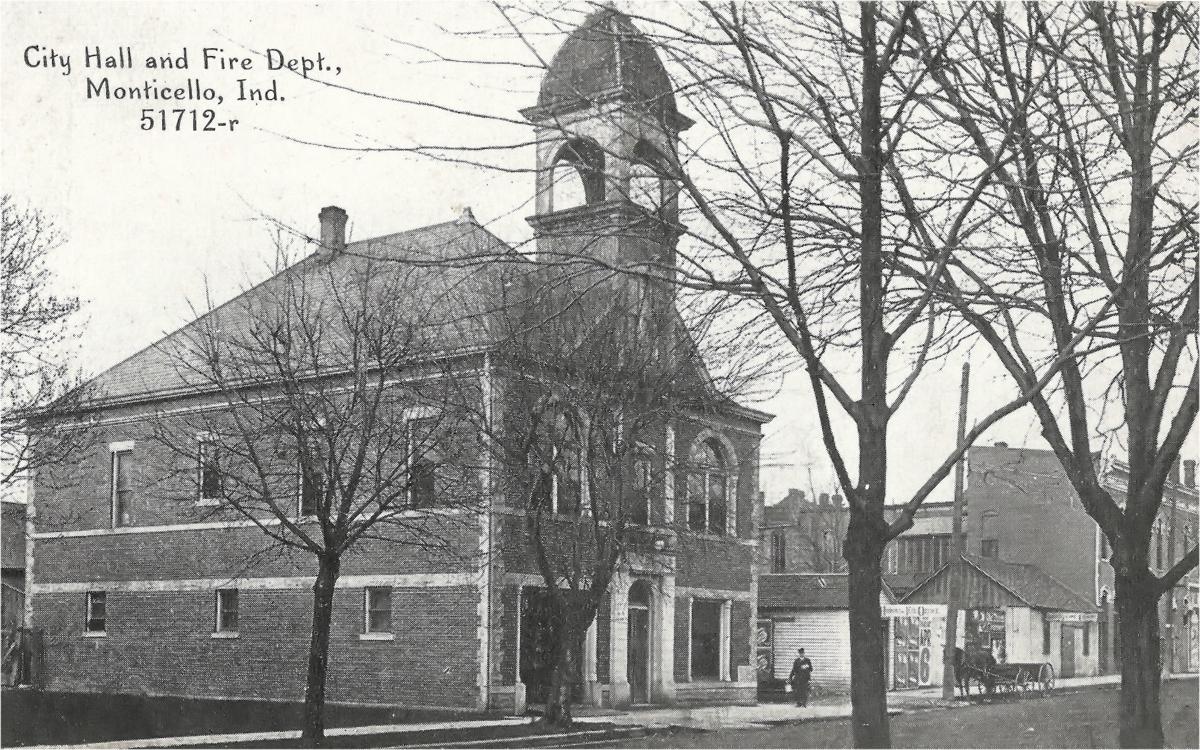 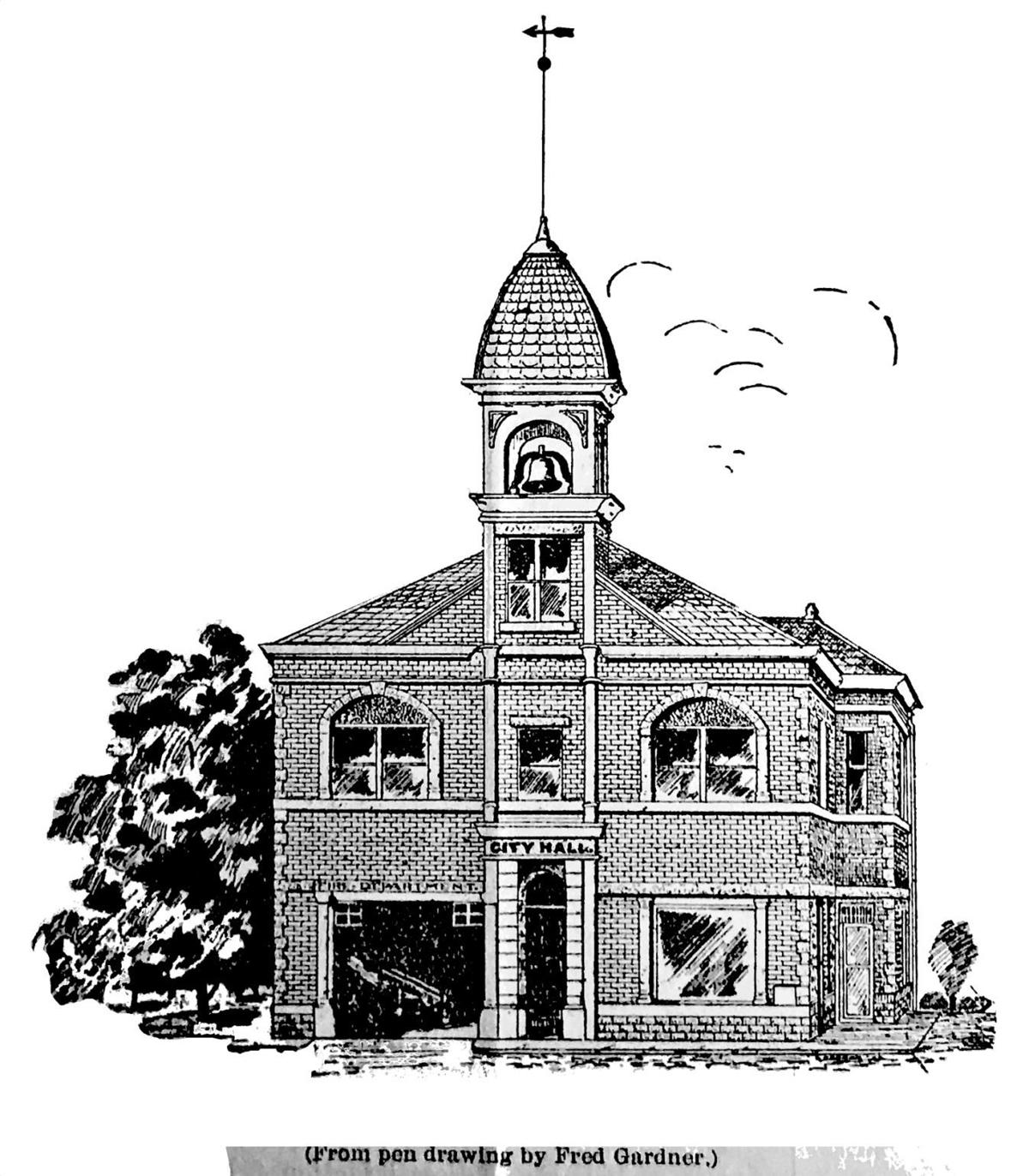 Pictured is a drawing by Fred Gardner of the proposed City Hall building in Monticello. The structure was built in 1904 for $12,000, which included heating and furnishings.

Monticello’s City Hall as it appeared in the 1940s. The man holding a violin is Walt Wandrel.

Pictured is a drawing by Fred Gardner of the proposed City Hall building in Monticello. The structure was built in 1904 for $12,000, which included heating and furnishings.

During construction of Monticello’s City Hall, Monticello High School’s third floor was consumed by fire. From a financial viewpoint, the City Hall building couldn’t have come at a more inopportune time.

While untimely, the residents of Monticello were ecstatic on the beauty of the building. The structure yet today continues to charm the general public. City Hall stood on Washington Street and, at the time, was directly across the street from the offices of Drs. Robison and McCann.

The architect for the building was Samuel Young, from Monticello, and was under his exacting oversight. All of the work was done by local contractors. Ed R. Gardner installed the hot water heating system, Ed Troeger had the contract for the plumbing and Ira S. Kingsbury for all the brick and masonry work.

The layout of the original building had the Monticello’s City Marshal’s office at the southeast corner on the ground floor. Connected to the marshal’s office was a fireproof vault, and to the rear through a passageway were jail cells for prisoners.

Above the marshal’s office was the clerk’s office, which also had a vault and was connected with the council room in the rear. On the other side of the building, in the southwest corner on the second floor, was the treasurer’s office that consisted of two rooms. To the rear of the building was the town engineer’s office.

Adjoining this on the east was the council chamber. This room was the largest in the building and had a table in the center for the clerk, engineer, town attorney and marshal. Separate desks were placed in a semicircle for each member of the town board which faced the audience.

Twenty chairs were placed to the west for the audience which was separated by a railing from the board members trustees.

Fire apparatus occupied the west side of the ground floor. On the top was a belfry tower that housed the bell that was used to sound the alarm. The building was heated with hot water radiators and the building had restrooms on both floors. Lighting was provided by 90 incandescent lights installed throughout the building.

The City Hall cornerstone is inscribed with the names of the board trustees. These are: John H. Miller, Alvin Witz, Charles Roth, Dr. F.B. Robison and John H. Henderson.

The pictured pen drawing of City Hall was created by Fred Gardner. At the time of this drawing, he, for the prior 16 years, had engaged in carriage and sign painting for the residents and merchants of the area. His sign shop was located on East Harrison Street, which today is a parking lot.

Turning our attention to Sam Young, the architect who created the design of City Hall, I think you will be amazed at the volume of homes, schools and business buildings he designed. He oversaw every detail of their construction.

Prior to the rise of certified architects, it was the job of carpenters to design homes and business structures. It seems that the prospective clients were more concerned with being able to get from room to room, a roof over their head that kept the rain and cold out of the structure. Builders had little vision of proportion, adornment or ventilation.

Houses were constructed with little planning and the future homeowner had little idea what the finished product would look like. Oftentimes the homeowner would reference another home and told the contractor to replicate it.

Over time, it was found an architect was well worth his fee in material savings and speed of construction, and the end product was more satisfying to the customer. It was in the later part of the 18th century and the beginning of the 19th century that architects came into vogue in rural areas.

By 1900, buildings designed by skilled architects became the rule rather than the exception.

Young was a true architect long before he began calling himself one. He started in the trade as a carpenter and was a mechanic from his early childhood. Young, at a young age, viewed the utility of plans as the only way to build something. As his reputation gained prominence, so did the volume of his work.

His services were always in demand due to the excellence of his work, allowing him to dedicate himself to an architectural pursuit.

The result of his skill is evidenced in many of the homes and buildings in Monticello area. A few of the structures he designed were the Baker-Uhl building, renovation the Monticello Drug Company building, The Emge block in Reynolds as well as the referenced City Hall building.

What was unique about architect Young was his insistence that structures were built to his prints and that all material for the structures were of the best quality. When concrete block construction came into vogue, Young personally supervised the manufacture and ingredients used in the blocks.

In the 1910s and 20s, Young’s services were requested to design and oversee most of the brick schools in White County that were built during this period. In Carroll County, he was the architect for the Patton and Carson schools.

Young’s talents were also put to use by George Wolverton when he decided to build the largest stock barn in all of White County. The barn, designed by Young, measured 68 feet by 120 feet, with 30-foot posts and a self-supporting roof.

Young’s design on this barn provided an unobstructed interior for hay forks and the hay carrier for the haymow. The haymow was designed to hold 225 tons of hay and, at the floor level, had room to feed 120 head of cattle with room to spare for removal of refuse with a wagon.

For Wolverton, all feeding of the cattle was under roof. The construction called for 45,000 board feet of timber for the frame and required 95,000 shingles to cover the roof.

In 1924, Young, a staunch Republican, filed for his candidacy as a state representative for White and Benton counties. Young was defeated in the May primary.

He was born in Mifflin County, Pa., in 1864, the son of Adam and Hannah Young. The family came to Jackson Township when Samuel was a young child. For much of his later life, he lived at 721 S. Bluff St.

Young died at age 79 from heart and renal failure in 1943 and is buried in Pike Creek Cemetery alongside his wife, Minnie.

Without question, no other architect in White County was as prolific and exacting as Sam Young. Several of the structures he designed are still with us today.

Showers likely and possibly a thunderstorm this evening, then some lingering showers still possible overnight. Low 46F. S winds shifting to W at 10 to 15 mph. Chance of rain 80%.