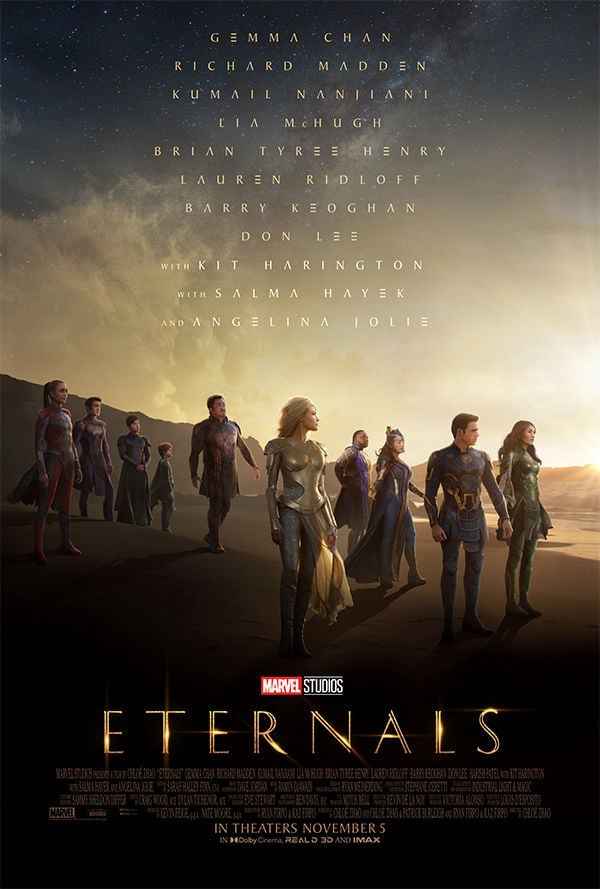 “Eternals” is rated PG-13 for fantasy violence and action, some language and brief sexuality. Its running time is 167 minutes.

“Eternals” is one of those Marvel Cinematic Universe movies that tries to introduce a whole team of new superheroes at once.

Sometimes this works to great effect. “Guardians of the Galaxy” gave us five new characters that were instantly iconic.

Other times the tactic falls flat, like with Thor’s forgettable entourage. The cast of “Eternals” falls between the two, though sadly the film pulls slightly toward the latter.

The Eternals are extraterrestrial beings that have been on Earth for 7,000 years with the sole purpose of protecting humanity from monsters called Deviants. They are forbidden from interfering with human affairs unless Deviants are involved, which is why they couldn’t get involved with, say, the war with Thanos.

In other words, the movie had to come up with a reason why these millennia-old superheroes haven’t been involved in the MCU until this point, and that reason is a poorly-followed taboo.

The Eternals are the following:

That’s 10 new superheroes, not to mention periphery characters like Dane and Karun. You can feel the screenplay buckling under the pressure, and too often the movie feels rushed. Not rushed as in fast-paced, but more like the movie didn’t have time to include everything it wanted – and perhaps needed.

For example, the Eternals are faced with a non-Deviant dilemma that affects the fate of the Earth. They don’t agree on how it should be handled, which leads to in-fighting and even murder. It’s good that the diverse cast has a diverse array of viewpoints, but the film is so overcrowded that certain characters only get a few seconds to explain their stance, and when the film requires them to change that stance, it has to happen just as quickly.

It’s admirable that Oscar-winning director Chloe Zhao wanted to take on a project this ambitious, and visually the film is a treat, but it just can’t handle juggling all the characters.

In an age where the MCU has the choice of debuting its new characters in a single movie or a spread-out TV series, I find it curious that a project this lofty didn’t go in the other direction.