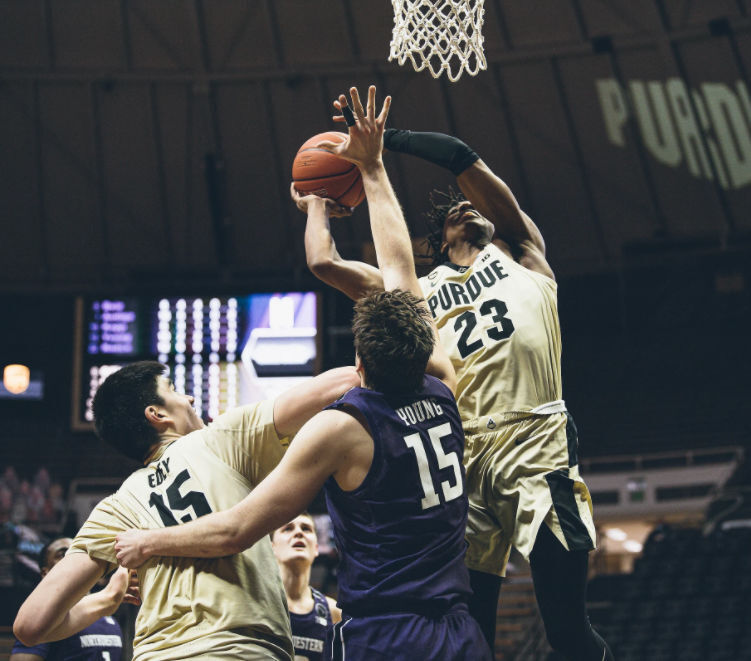 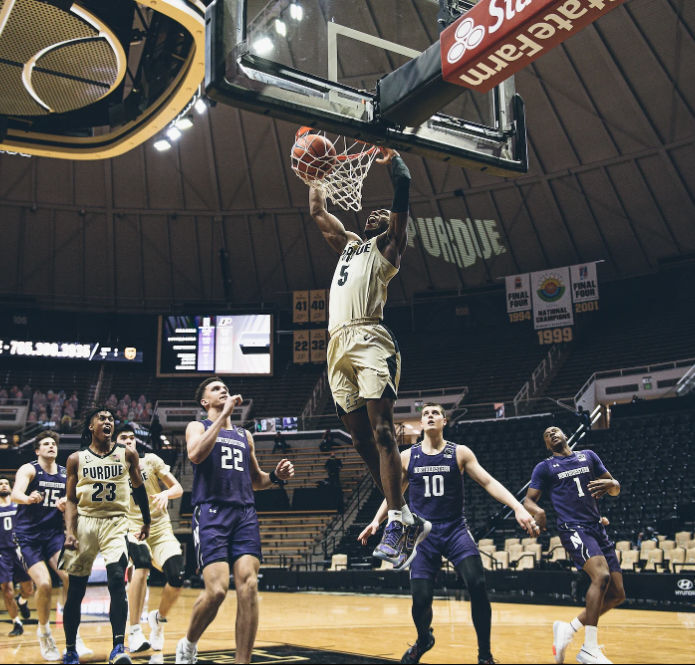 Purdue’s Brandon Newman slams down a dunk in the win over Northwestern.

Purdue’s Brandon Newman slams down a dunk in the win over Northwestern.

On Saturday, he scored a career-high 20 points, grabbed seven rebounds and providing the energy No. 24 Purdue needed to get past pesky Northwestern 75-70.

“I felt like all those shots were in rhythm,” Ivey said. “We were able to get some things, we still have to get better but those opportunities are going to come. We just have to keep playing like that.”

Zach Edey had 12 points and 11 rebounds as the Boilermakers won for the sixth time in eight games. Purdue also has won nine straight in the series for the first time since 1994-98 and gave coach Matt Painter his 350th career win and victory No. 175 in Big Ten play.

For the reeling Wildcats (6-10, 3-9) it was another tough day. Pete Nance finished with 20 points and Chase Audige had 18 points in a game they never led.

“When you play Purdue, you have to give a lot of attention to Trevion Williams and they play through their big guys,” Northwestern coach Chris Collins said. “”When they do that you have to make a decision about what you want to do. We chose to give some help (inside).”

And that opened the door for Ivey.

The freshman guard took full advantage, jump-starting the Boilermakers after a sluggish start by spurring a 17-6 run that gave Purdue a 33-20 lead late in the first half. But the Wildcats closed the half with four straight 3-pointers and made it 35-34 when Nance opened the second half with a layup.

The Boilermakers retook control when Eric Hunter Jr. capped a 6-0 spurt with a layup that made it 51-42 with 11:56 to play. The Wildcats never got closer than four the rest of the game.

“He’s always like that,” Edey said when asked about Ivey. “He’s a guy that can go for 20 every game. He’s a big-time scoring threat. He’s so quick, he can jump, he can shoot the ball, he’s a complete player.”

Northwestern: The Wildcats’ 6-1 start is a distant memory. And it looks like there’s no end in sight with this remaining schedule: Indiana at home, at Rutgers and No. 12 Illinois, home against No. 19 Wisconsin and at Minnesota before closing out the regular-season at home against Maryland and Nebraska.

Purdue: Despite losing Tuesday on the road and Saturday’s struggles, the Boilermakers just keep winning. While this one might not look impressive, guard Sasha Stefanovic returned after missing three games following a positive COVID-19 test. Getting the Big Ten’s top 3-point shooter is only going to help.

Purdue set a school record by cracking the poll for a sixth consecutive season last week. A one-point loss at Maryland shouldn’t hurt much and Saturday’s victory won’t help much. The Boilermakers are likely to be in the 20s again this week.

Northwestern: Nance had eight rebounds while Audige had six rebounds and six assists. ... Ryan Young finished with 10 points. ... After starting 7 of 14 on 3s, the Wildcats finished 10 of 28. ... Northwestern has lost seven straight against ranked foes after winning their first two this season.

Purdue: Ivey also had two steals. ... Trevion Williams had eight points and a season-low three rebounds, ending a streak of 14 straight games with at least 10 points and seven rebounds. ... Brandon Newman added 10 points. ... Stefanovic scored four points but was 0 for 4 from the floor and 0 for 3 on 3s. ... Purdue had a season-high 10 steals.

Purdue improved to 13-7 overall and 8-5 in the Big Ten Conference with a 75-70 win over Northwestern at Mackey Arena on Saturday evening.

Purdue now leads the series with the Wildcats by a 133-46 advantage. The win was the ninth straight over Northwestern, third-longest active winning streak against a single opponent.

The win tonight was Purdue’s 1,850th all-time, becoming the 11th collegiate program to reach that mark.

Purdue went 23-of-24 from the free throw line, making its first 21 attempts.

Purdue’s freshman class scored 53 of Purdue’s 75 points in the win over Northwestern. The 53 points are the second most scored by the freshman class during the Matt Painter era.

Jaden Ivey scored a career-high 20 points with seven rebounds, three assists, two steals and no turnovers in 36 minutes of action.