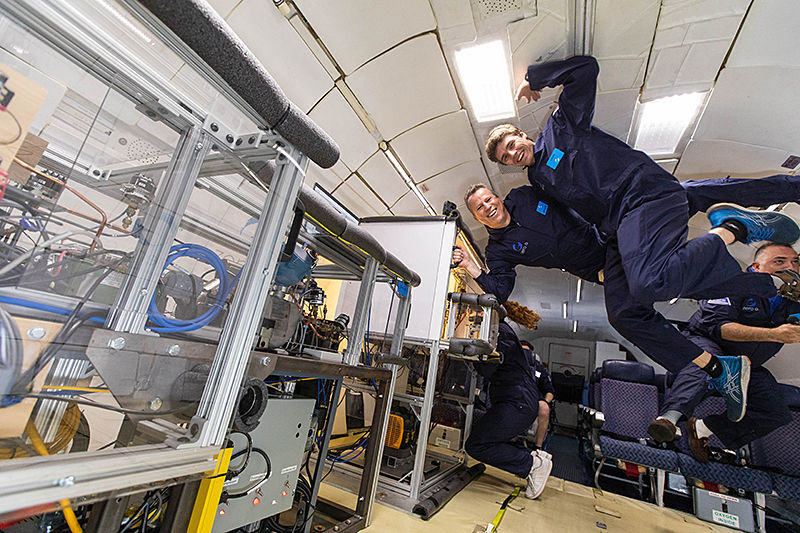 Eckhard Groll (center, below) and Leon Brendel (center, above) prepare to collect data from their experiments onboard a ZERO-G flight. 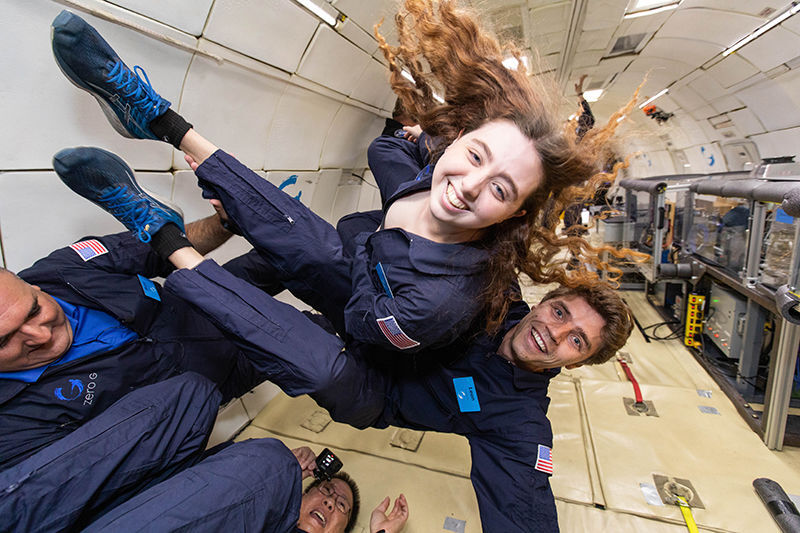 “I had to remember to not get cocky,” said Paige Beck (center, above), who worked with Leon Brendel (center, below) to observe the effects of microgravity on a fridge design for use in space. Purdue senior engineering technician, Frank Lee (bottom), was responsible for building the experimental setups.

Eckhard Groll (center, below) and Leon Brendel (center, above) prepare to collect data from their experiments onboard a ZERO-G flight.

“I had to remember to not get cocky,” said Paige Beck (center, above), who worked with Leon Brendel (center, below) to observe the effects of microgravity on a fridge design for use in space. Purdue senior engineering technician, Frank Lee (bottom), was responsible for building the experimental setups.

WEST LAFAYETTE, Ind. — Astronauts have been going to space since 1961, but they still don’t have a refrigerator to use for keeping food cold on long missions to the moon or Mars.

Through experiments conducted in microgravity, a team of engineers from Purdue University, Air Squared Inc., and Whirlpool Corporation has shown that a prototype they developed could potentially overcome the challenges of getting a traditional fridge to work in space just as well as it does on Earth.

The canned and dried food that astronauts currently eat during missions has a shelf life of only about three years. The team’s project, funded by NASA’s Small Business Innovation Research (SBIR) program, aims to give astronauts a supply of food that could last five to six years.

Earlier this month, the team ran three experiments to test various aspects of the fridge design onboard a specially designed plane that flew in microgravity 30 times – for 20-second intervals – during each of four flights. The plane, Zero Gravity Corporation’s (ZERO-G) unique weightless research lab, is the only testing space of its kind in the United States. (See a video of the in-flight experiments on YouTube.)

Data analyzed so far from the experiments on the flights, supported by NASA’s Flight Opportunities program, indicate two big successes of the team’s prototype. First, the prototype can operate just as well in microgravity as it does on the ground. Second, the team determined that the prototype was no more likely to flood in microgravity than in normal gravity. Liquid flooding could damage a fridge.

The team is continuing to analyze the flight data collected.

“We want to have a refrigeration cycle that is resistant to zero gravity and works to normal specifications,” said Eckhard Groll, a professor and head of Purdue’s School of Mechanical Engineering. “Our preliminary analysis clearly shows that our design allows gravity to have less impact on that cycle.”

The researchers are not the first to attempt building a fridge like those used on Earth for space missions, but they are among the few who have tried since astronauts walked on the moon in 1969. Even though fridge experiments have been in space before, they either didn’t work very well or eventually broke down.

The team’s prototype is about the size of a microwave, ideal for potentially fitting into the International Space Station’s rack systems, EXPRESS Racks, that store research experiment payloads. Air Squared built the prototype and the oil-free compressor inside, which acts as the heart of the fridge.

Bring the outdoors in: The energy-efficient method for using 100% outdoor air in buildings

The team’s experiments aimed to test a common hypothesis that pushing refrigerant liquid through a vapor-compression cycle at a higher velocity would reduce the effects of gravity on the fridge’s performance. A detailed analysis of the data will show whether the constraint of these high-flow velocities and the large pressure drop they create can be removed, which could improve the fridge’s performance by saving energy.

Two experiments built by Purdue researchers flew with the prototype experiment to evaluate how microgravity affected the design’s performance and susceptibility to liquid flooding. Whirlpool Corporation provided components for the fridge experiments as well as expertise on how to integrate these components, run the experiments and package the prototype in a way that would meet requirements for use in a long-term microgravity environment such as the International Space Station.

Testing a fridge for space while still on Earth

Before the flights, Purdue researchers showed through one of the experiments that an oil-free vapor-compression cycle can operate in different orientations – even upside down. If a fridge can operate in any position, space crews wouldn’t have to worry about making sure the fridge is right side up at a landing.

“The fact that the refrigeration cycles operated continuously in microgravity during the tests without any apparent problems indicates that our design is a very good start,” said Leon Brendel, a Purdue Ph.D. student in mechanical engineering. “Our first impression is that microgravity does not alter the cycle in ways that we were not aware of when we tested the effects of gravity on the fridge design on the ground by rotating and inclining it.”

Groll, Brendel and Paige Beck, a Purdue junior majoring in mechanical engineering, conducted the experiments on the flights, along with members of the team from Air Squared and Whirlpool Corporation. For each flight, the plane performed 30 parabolas including Martian, lunar and micro gravities.

“Floating around with the experiments is kind of like swimming, except that you don’t have resistance around you and you have to work to get the data at the same time. It was pretty fun, but I had to remember to not get cocky,” said Beck, who had the challenge of holding herself in place to collect data from an experiment at regular intervals and simultaneously record her actions into a microphone.

Other challenging tasks involved quickly changing parameters in between parabolas or slightly turning a needle valve while floating around.

“Sometimes I was too slow! But you learn as you go, and we successfully got the data we needed,” Brendel said.

The team will be completing data analysis in the coming weeks.