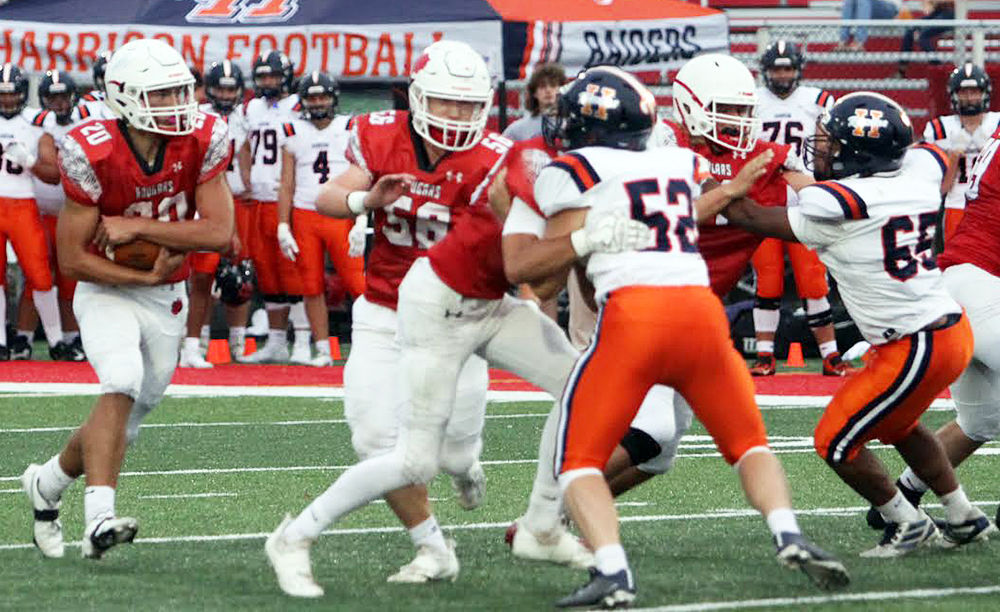 Kougar junior Logan Parks had 11 carries for 29 yards before an injury forced him out of the game. 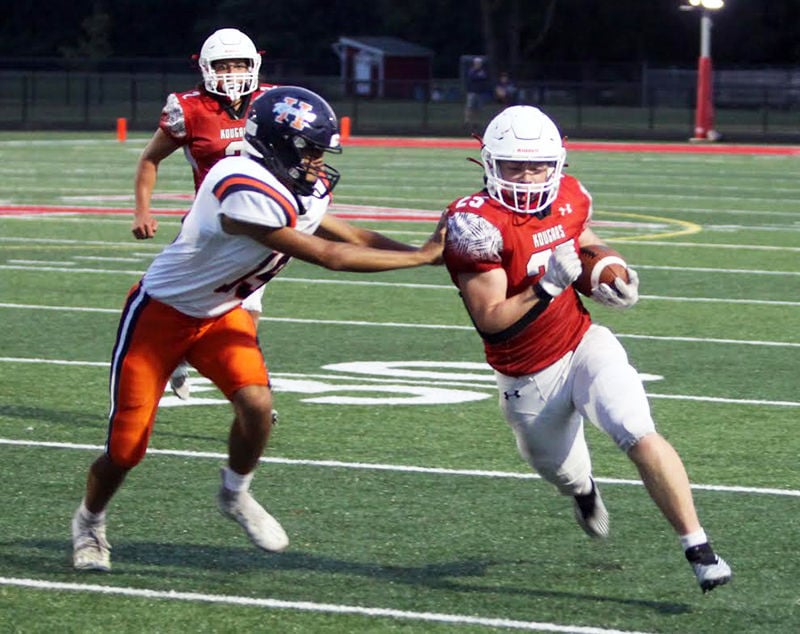 Kougar junior Logan Parks had 11 carries for 29 yards before an injury forced him out of the game.

WHEATFIELD — Simply put, the Harrison Raiders ran roughshod over Kankakee Valley under the Friday night lights, seemingly scoring at will in a 57-21 mismatch on Sept. 3.

The Kougars were slated to play South Bend Washington, but when that team was unable to play, the Raiders were picked up.

Harrison put up double digits in all four quarters while holding the Kougars to three TDs.

On paper, KV looked more that competitive and if you looked at the post-game stats (other than touchdowns) you would think the Kougars should have won. They possessed the ball for 60 minutes compared to just 18 for the Raiders. They ran 72 plays to just 38 with 18 first downs to 17 by Harrison.

The Raiders notched six penalties for 60 yards while KV had just two for 20 yards.

It wasn’t the time of possession, number of plays or penalties that spelled doom for the Kougars; it was what the Raiders did with that time. They put up 437 yards of total offense with 380 of that coming on the ground. The Kats had 249 total yards of offense with 116 on the ground and 133 through the air.

Harrison scored just 40 seconds into the game and added the PAT to jump out to an early seven-point lead. On the Kougars’ first possession, they marched downfield, seeming ready to match them before the Raiders stopped them short. A field goal attempt was no good, and following the turnover, Harrison needed just four plays to again score and then added a two-point conversion for good measure.

At the 8:22 mark in the second quarter, Lafayette scored again and added a PAT to go up 22-0. KV again marched downfield, but a forced fumble turned the ball over and Harrison again scored and were soon up 29-0.

The Kougars would finally get on the board after senior quarterback Grant Stowers overcame a sack to find Caleb Swallow in the end zone. Evan Misch’s PAT was good and the Kats had seven.

Much of the gains on the ground throughout the first half were made on hard-earned runs by Logan Park. On Harrison’s next possession, Eli Deardorff intercepted a pass and then a few plays later, Stowers hit him on the run for KV’s second TD. Misch quickly made it 29-14 as the teams headed into the locker rooms for halftime.

After the break, Harrison kicked a short kick which was fielded cleanly by Max Lustig. A disturbing sight for Kougars fans, however, was Parks on crutches on the sideline with an obvious foot injury. KV kept its pre-halftime momentum going, however, with senior Jack Lamka picking up the slack in Parks’s absence.

Stowers and Lamka marched the Kougars downfield and the Kougars scored on a two-yard-run by Stowers. Misch’s PAT put the Kats within eight points of their guest, 29-21.

The Kougars then attempted an onside kick which was fielded by the Raiders and, just like that, the momentum was gone. Harrison would score twice more in each of the last two quarters to arrive at the final demoralizing score.