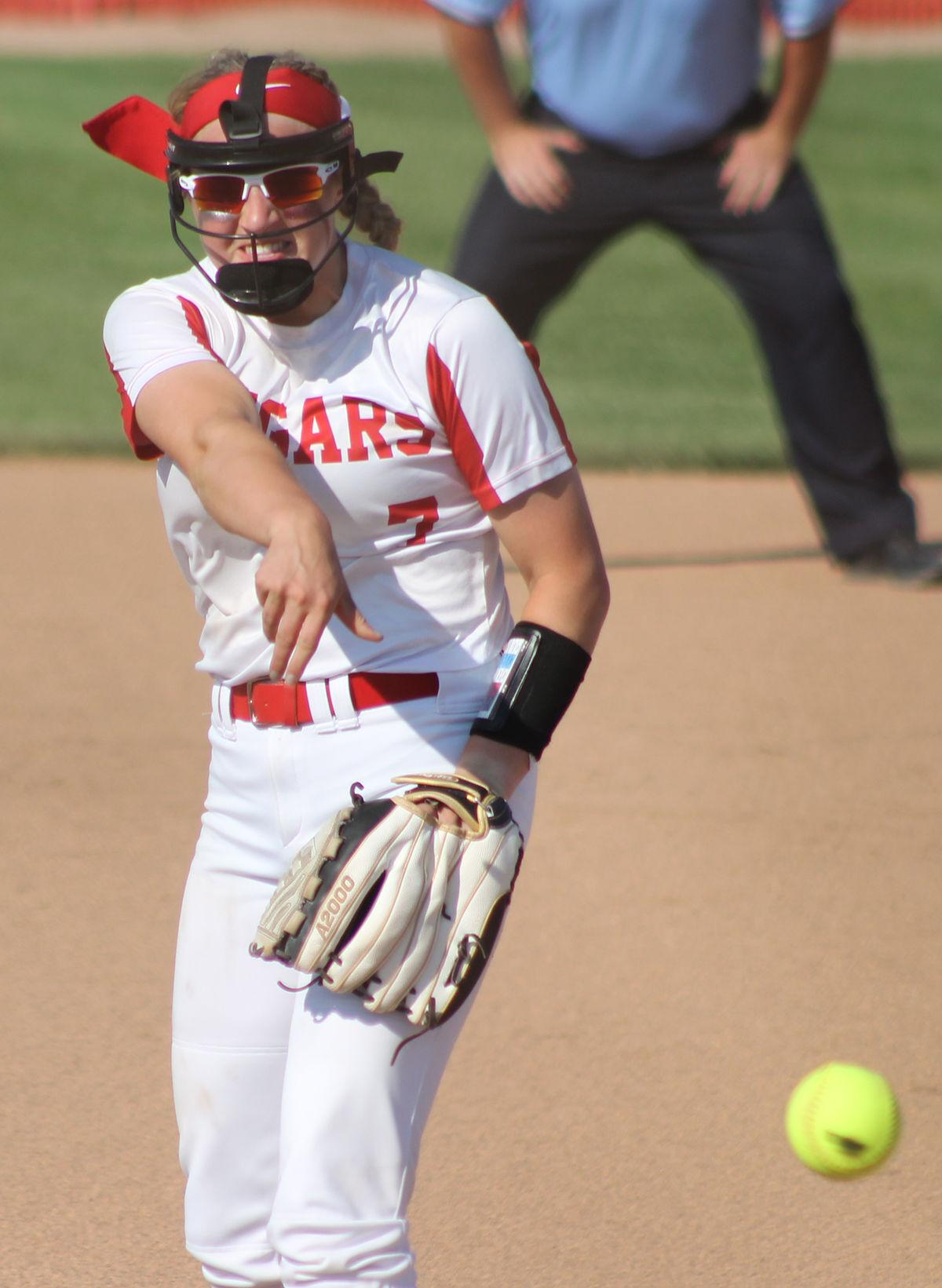 KVHS senior pitcher MaryKate Shultz had four wins during her team’s five-game ride through the post-season. 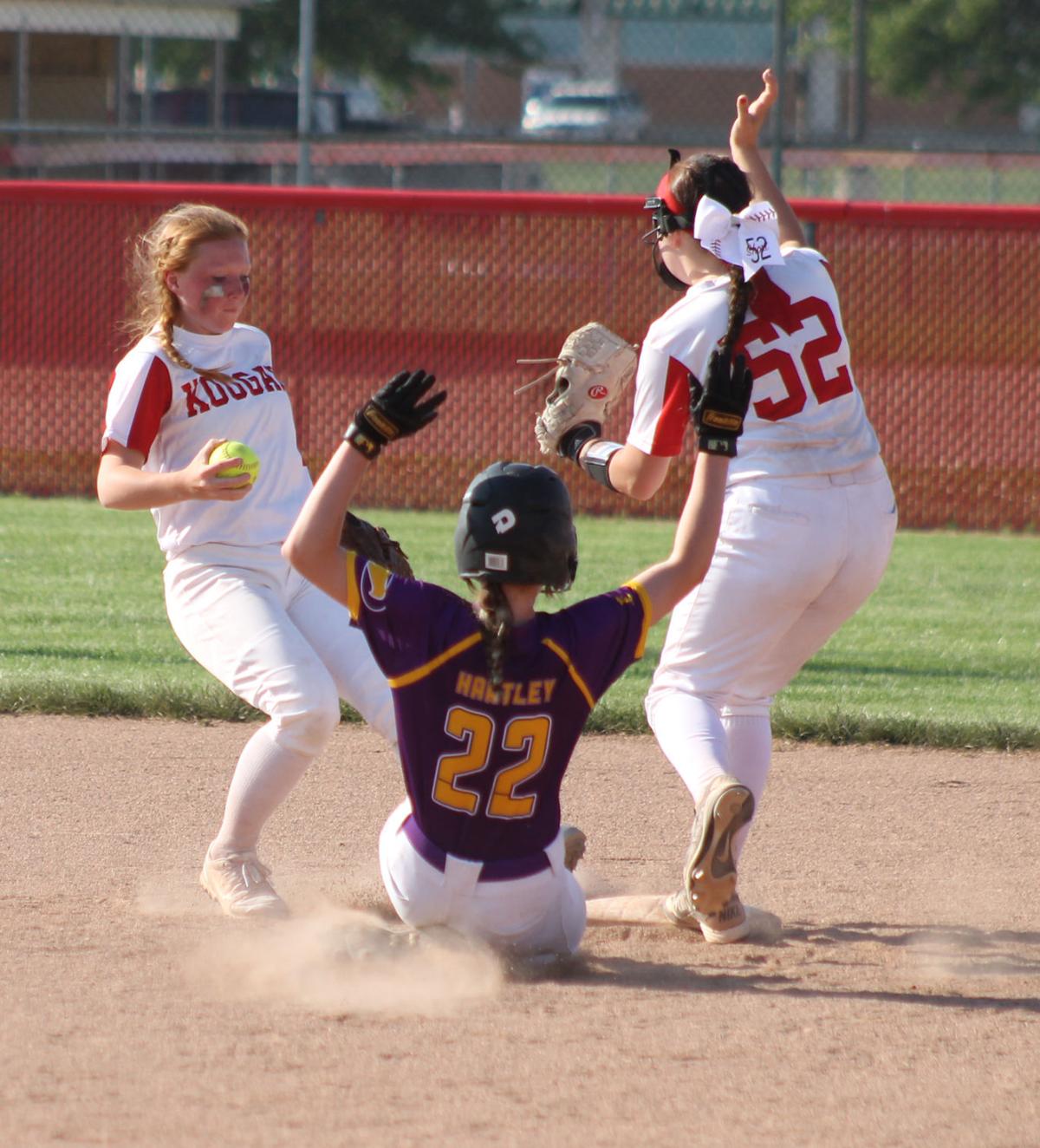 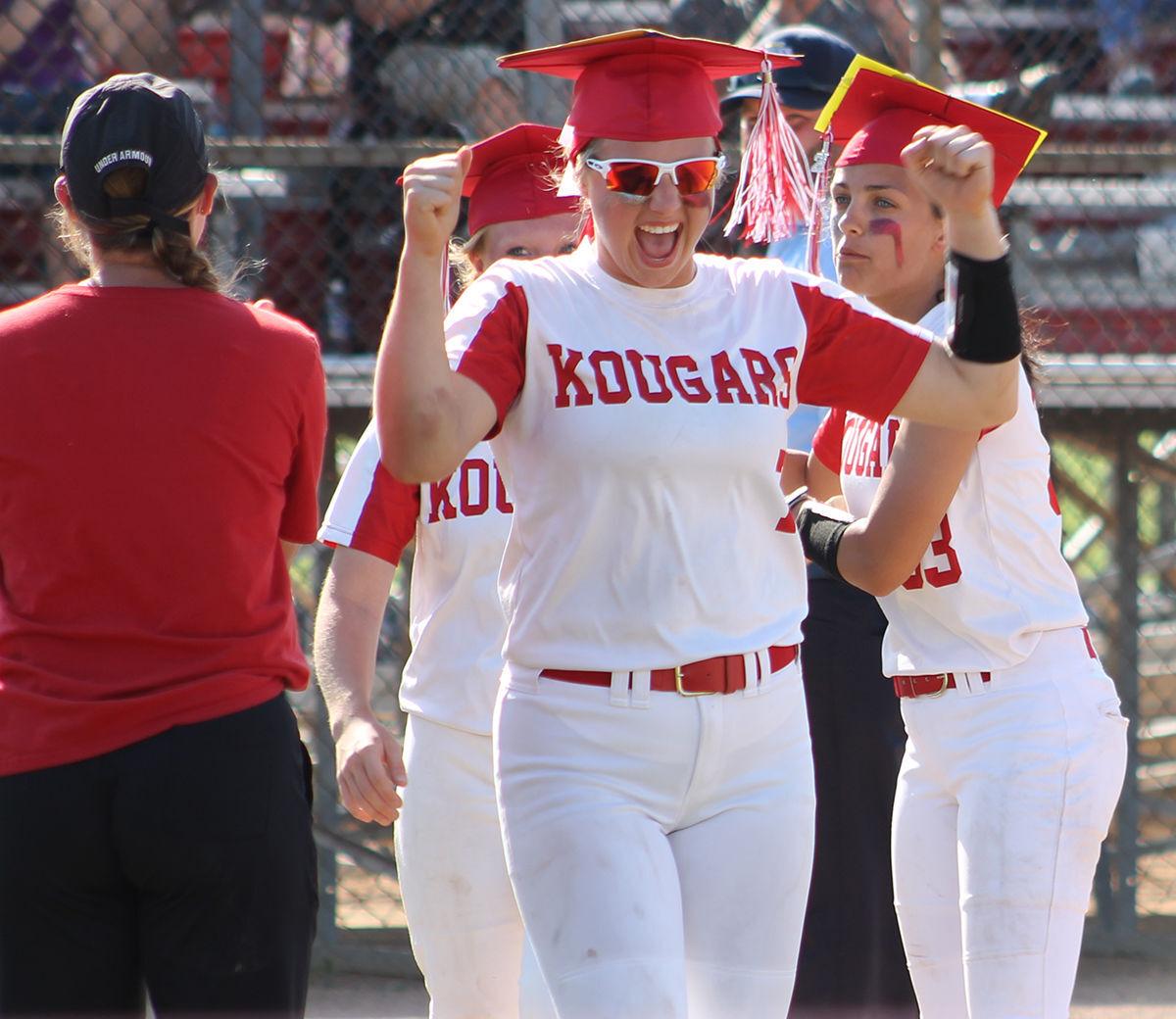 KVHS senior MaryKate Shultz celebrates as she is anointed a 2021 graduate by coach Amanda Suarez prior to Saturday’s semistate game with Guerin Catholic. 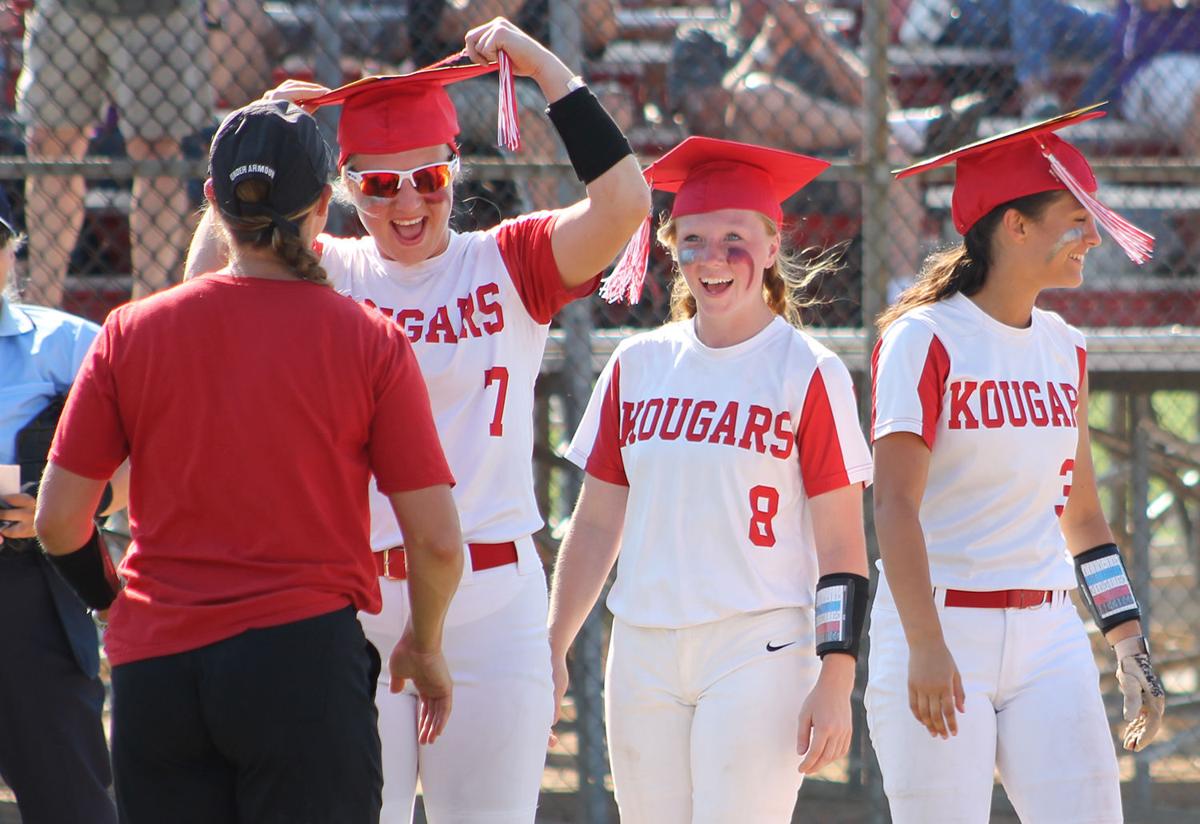 KVHS seniors MaryKate Shultz, Hayley Alexander and Carly Basham missed their school’s graduation ceremony Saturday, but showed they were there in spirit by wearing caps at the start of their game with Guerin Catholic. Shultz finished as the class salutatorian. 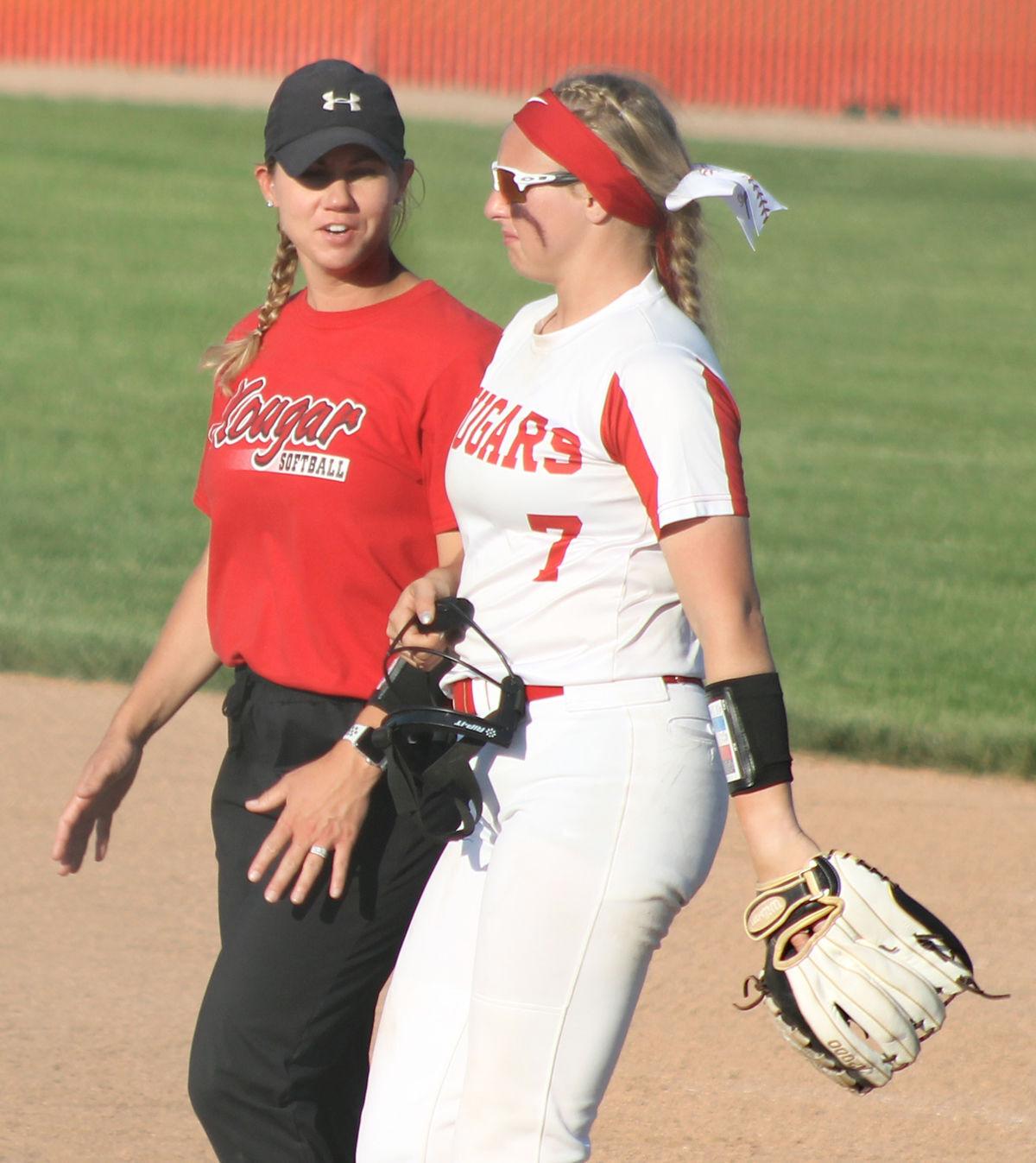 KVHS senior pitcher MaryKate Shultz had four wins during her team’s five-game ride through the post-season.

KVHS senior MaryKate Shultz celebrates as she is anointed a 2021 graduate by coach Amanda Suarez prior to Saturday’s semistate game with Guerin Catholic.

KVHS seniors MaryKate Shultz, Hayley Alexander and Carly Basham missed their school’s graduation ceremony Saturday, but showed they were there in spirit by wearing caps at the start of their game with Guerin Catholic. Shultz finished as the class salutatorian.

MONTICELLO — It appeared no pitcher would be able to slow down Kankakee Valley’s juggernaut offense in the post-season.

Then Guerin Catholic senior Alicia Flores stepped into the circle Saturday in the semistate championship at Twin Lakes.

The hard-throwing right-hander held the Kougars to just one hit — that coming off the bat of junior Lexi Broyles to start the bottom of the seventh inning — and struck out a career-best 21 batters as the Golden Eagles punched their ticket to the Class 3A state title game with a 7-0 victory.

Guerin, ranked No. 2 in the final 3A coaches poll, beat No. 1 Yorktown, 1-0, in the Hamilton Heights sectional final to advance in the tournament.

“They’re just a good team,” KVHS coach Amanda Suarez said. “They put the ball in play. Their on-base percentages are high, their batting averages are high and their pitchers are on point.”

The Kougars (17-11) came into the semistate final having outscored their opponents, 31-0, in three post-season games. They beat Bremen (10-0) in the sectional final, Hanover Central (11-0) in the regional championship and South Bend St. Joseph (10-0) in Saturday’s second semistate semifinal.

But Flores was on cruise control from the start. She had 18 0-2 counts against the 25 batters she faced and struck out the side in six of the seven innings.

Four Kougars reached base, with MaryKate Shultz reaching on a hit-by-pitch in the first inning, Mady Peterson reaching first on a dropped third strike in the third and JoJo Short reaching on an infield error in the fifth.

Broyles broke up a potential no-hitter by blooping a single over the first-base bag on a 0-1 count in the seventh. But Flores struck out the next three batters to send her team to its first state finals.

An RBI single by Victoria Flores with one out in the first inning started the scoring for the Golden Eagles. Lucy Schenk had an RBI groundout for a 2-0 lead.

Guerin added two more in the second, with one run scoring on an obstruction call on the infield and another scoring on Victoria Flores’ single.

Of the Golden Eagles’ first five hits, four were bloop hits that barely reached the outfield. But Victoria Flores crushed a three-run home run in the top of the fourth inning that sailed well over the left centerfield wall for a 7-0 lead.

Guerin would get runners into scoring position in the sixth and seventh innings, but Shultz would answer the call both times to help extend the game.

Meanwhile, Alicia Flores continued to fluster the KV lineup, striking out five of the last seven batters she would face.

The Kougars set the stage in three straight post-season games by jumping ahead in the first inning. But Flores never wavered from the first batter.

“We had a lot of great energy coming in, but we just didn’t have it in that first inning like we needed,” Shultz said. “We didn’t come out hitting like we’ve done every other game and our defense was a little bit rocky.”

Flores (14-1) reduced her earned run average to 0.64 with the shutout. It was her eighth shutout in 15 starts this season and she has now recorded 202 strikeouts.

But she may not be the Golden Eagles’ best pitcher. That title could go to junior Izzy Kemp, who struck out 20 batters in Guerin’s 12-0 rout of Fort Wayne Dwenger in Saturday’s semifinal game.

“We got on a high a couple of weeks ago and we just ran with it,” Suarez said of her team’s offense. “We just told them let’s keep that intensity level and we’ve been riding on it. Unfortunately, we just couldn’t keep it going one more game.”

Victoria Flores finished 3 for 4 at the plate with five RBIs and lead-off hitter Ana Macha also had three hits and scored two runs.

Prior to the game, seniors Shultz, Carly Basham and Hayley Alexander wore their graduation caps at home plate during the team captains’ meeting. By reaching the semistate final, the three players had to miss KV’s graduation ceremony Saturday afternoon.

“It’s okay,” said Shultz, who finished as the class salutation. “Best graduation present I could ask for.”

This season was the first that all three seniors got to share the field for an extended period of time. Shultz suffered a back injury as a sophomore and the girls had their junior year wiped out due to COVID.

“It’s been a long road,” said Shultz, who plans to attend Florida Tech in the fall to study aerospace and mechanical engineering. She also plans to walk-on the softball team there. “This is my first year truly playing with them considering my sophomore year I broke my back and last year we didn’t play. But it’s been a heck of a ride.”

Suarez began coaching her three seniors during their freshmen season. She served as junior varsity coach for three years before being named the varsity head coach this spring. She has also served as head coach of North Newton and Hanover Central’s programs.

She replaced Brian Flynn, who had been the program’s coach since its inception in 1994.

“I didn’t know anybody when I first came to KV and we’ve kind of been in it together from the beginning,” Suarez said. “I coached them on JV, they moved up and I came with them. They’ve been my support system as much as I’ve been theirs. It’s tough to see them go.”

KV’s roster is a mixture of veterans and talented youngsters who continued to mature as the season entered the post-season.

“I think we’ve known all along that we had the potential,” Suarez said of KV’s season. “We talked about it from the beginning of the season that the season is not a sprint, it’s a marathon, and we were always prepping for the post-season. That was our goal.”

The Kougars will return six position players next spring, but will need to find a replacement for Shultz, who set the school’s record for strikeouts in a season (188) and earned all-academic all-state as well as all-conference and academic all-conference.

“We’ve got a lot of work to do in the off-season, but I think this season was all about playing a season; being present and not looking past the season,” Suarez said. “We were playing to win right here, right now and now we have a lot of rebuilding to do.

“The want is there. We just have to put it all together.”

The Kougars reached the semistate final behind a 10-0 shutout of No. 9 ranked South Bend St. Joseph in Saturday’s second game.

The Kougars took advantage of a steady breeze blowing out, hitting four home runs. Junior Carmen Rosado had a pair of solo homers and added a double and Shultz was 2 for 3 with a homer and two RBIs.

Short, one of two freshmen to start for KVHS, had a home run, a double and a single and drove in a run. She also scored three times.

The other freshman starter, Elyse Starr, was 2 for 4 with two RBIs, Peterson was 3 for 4 with an RBI and Abbi Wilhelm, a sophomore, had three hits, including a double. Basham added an RBI double.

Shultz scattered five hits over six innings to pick up the win. She struck out eight and walked none to pick up her fourth win of the tournament.