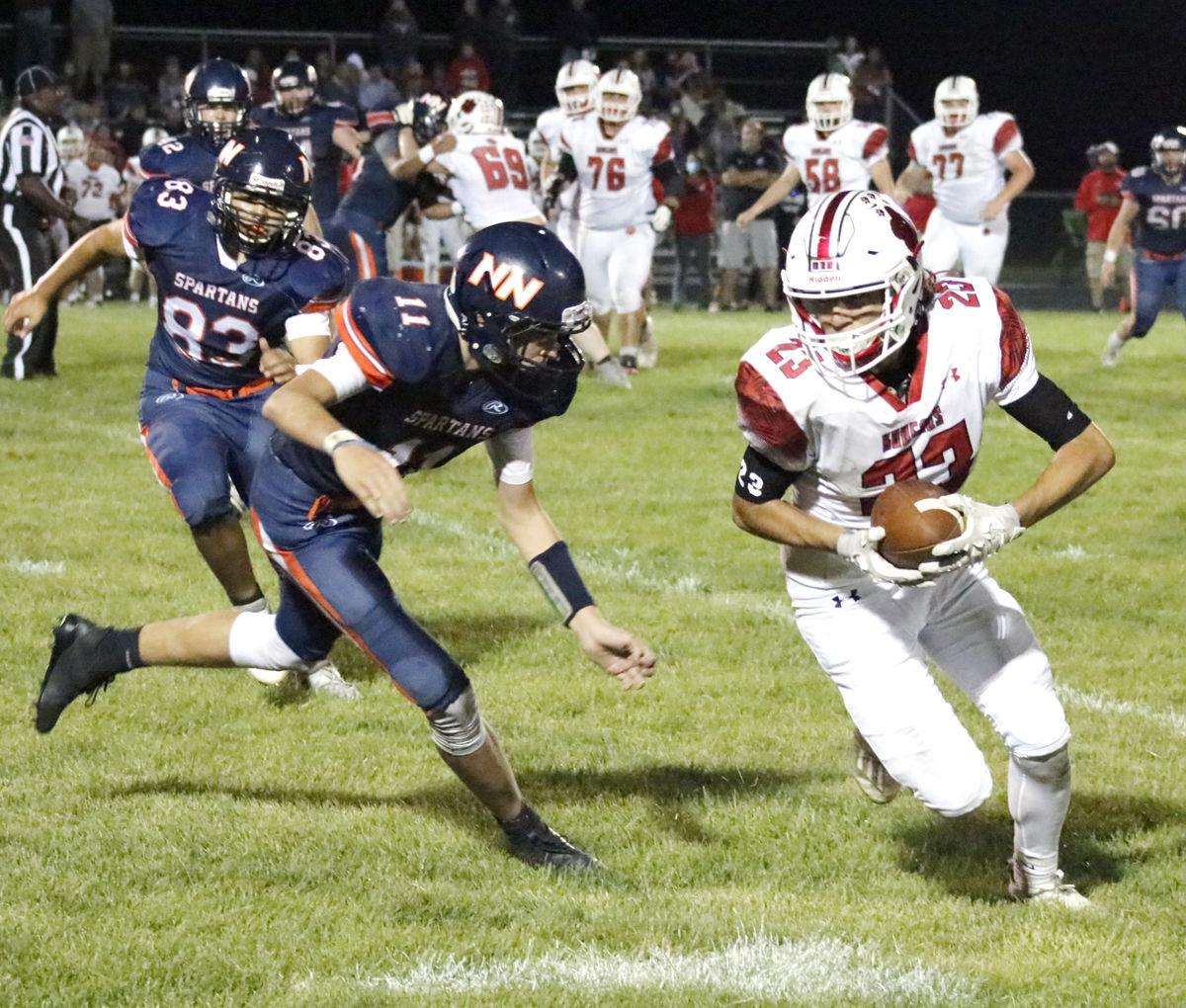 Kankakee Valley junior Caleb Swallow (23) turns upfield after hauling in a cacth in the Kougars’ 44-8 win over North Newton. 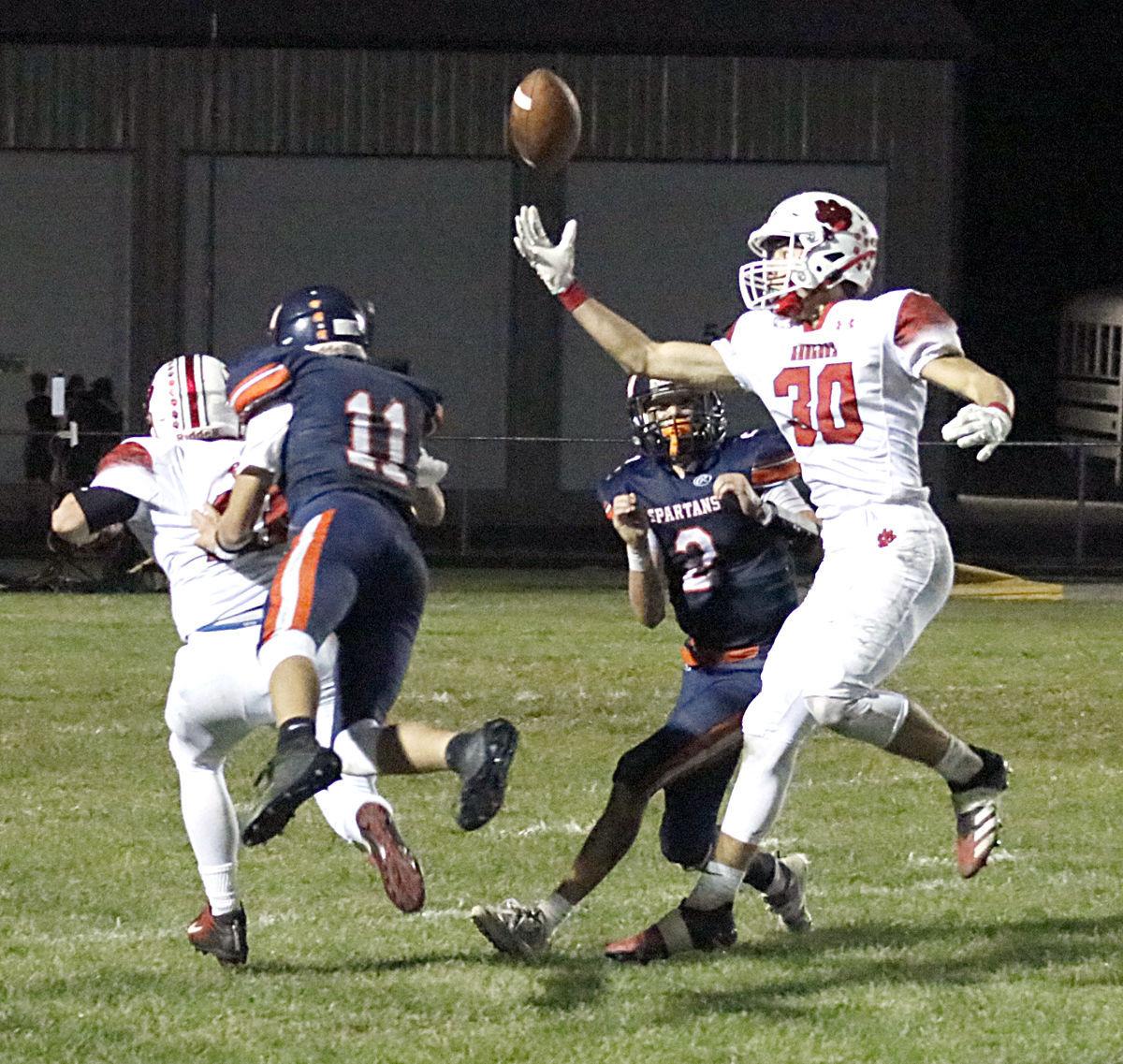 Kankakee Valley junior Caleb Swallow (23) turns upfield after hauling in a cacth in the Kougars’ 44-8 win over North Newton.

MOROCCO — Kankakee Valley scored 35 unanswered points for a 44-8 win over North Newton to improve to 4-0 for the first time since 2012.

“These kids are mentally prepared and ready to win,” said Kankakee Valley head coach James Broyles. “They are focused and moving forward each week. They put the bad stuff behind them and they try to learn from it and improve.”

At the end of a close first quarter, the Kougars led 9-8 but put up three scores in a matter of just over four minutes to turn a close game into a 30-8 lead by halftime.

It was deja vu for Spartan fans as it was the third consecutive week where one small stretch of play put the game out of reach for them as North Newton dropped to 1-3 on the season.

“We haven’t put together four complete quarters of play this entire season and against good teams that will kill you, “said North Newton coach Scott Rouch. “We have played three very good programs in a roll now so that is also part of it. We are down a couple of starters and we have freshmen and sophomores playing in positions that some of them probably aren’t ready to play. But I do think we are getting better. We are better than we were three weeks ago and we are coming into the stretch of important conference games.”

Kankakee Valley was able to drive the ball inside the North Newton 10-yard line on the very first possession of the game, but the Spartan defense stood strong on fourth down to force a turnover on downs. However, the Spartan offense couldn’t do much on its first series of the game and was forced to punt the ball. The snap was too low for the punter and the ball went out of the end zone for a safety and a 2-0 lead for the Kougars.

Kankakee Valley got the ball back on the ensuing kickoff and needed just two plays to find the end zone as senior Eli Carden connected with senior Ryan Tinnel for a 42-yard touchdown pass. Markus Ritchie added the PAT and Kankakee Valley was up 9-0 with 6:43 to play in the first quarter.

The North Newton offense failed to pick up a first down on its next possession and Kankakee Valley got the ball back on their own 45-yard line.

However, three plays later North Newton senior Austin Goddard would intercept a pass from Carden, which would give North Newton the momentum for its lone score of the game — a 32-yard touchdown pass from Goddard to freshman Evan Gagnon.

The Spartans added the two-point conversion and trailed just 9-8 with 1:46 to go in the opening quarter.

Kankakee Valley answered back on its next possession, marching the ball 72 yards on just eight plays for the score. The highlight play from the drive was the 53-yard pass completion from Carden to Ritchie to set up a first-and-goal at the North Newton 8-yard line.

The Spartan defense kept the Kougars out of the end zone for the next three plays, but on fourth down, junior Cade Capps scored from a yard out. Ritchie added the PAT and the Kougars were up 16-8 with 9:38 to play in the second quarter.

North Newton gave the ball right back to the Kougars on the next play from scrimmage via fumble, and Carden connected with Ritchie for a 25-yard touchdown pass just a play later. With the successful PAT, Kankakee Valley was up 23-8 with 9:19 to go in the first half.

The Kankakee Valley defense forced the Spartans to go three-and-out on their next possession and the Kougars would move the ball 50 yards on six plays for another touchdown – a 17-yard touchdown pass from Carden to Ritchie. After the PAT, Kankakee Valley was up 30-8 with 5:25 to play in the first half.

Neither team would score again in the first half and the 30-8 lead would hold up until the fourth quarter.

“I thought even though we came out flat, we were still able to maintain focus and execute,” said Broyles. “That is a big deal because in the past we would have that breakdown and then collapse. We didn’t do that tonight.”