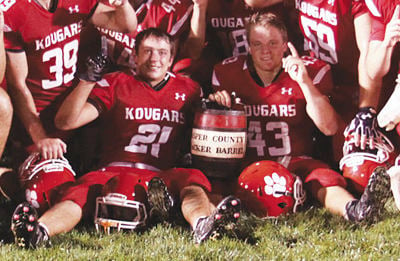 Kankakee Valley last secured possession of the Cracker Barrel in 2017. 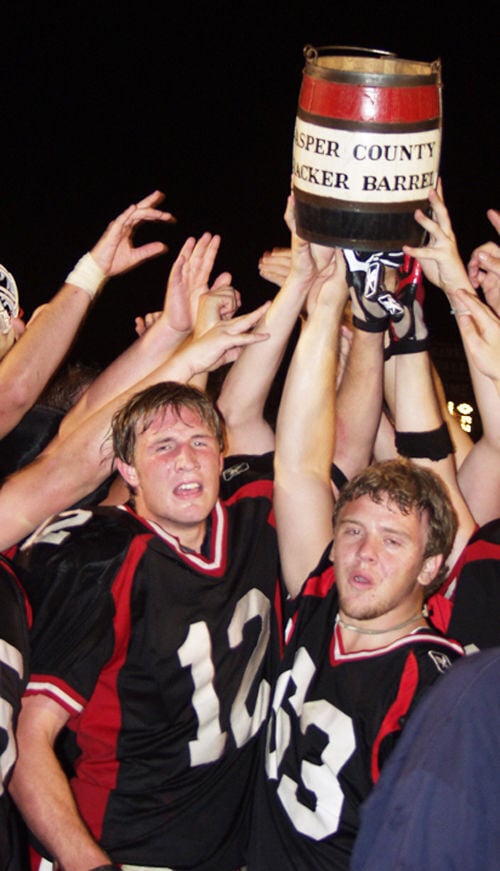 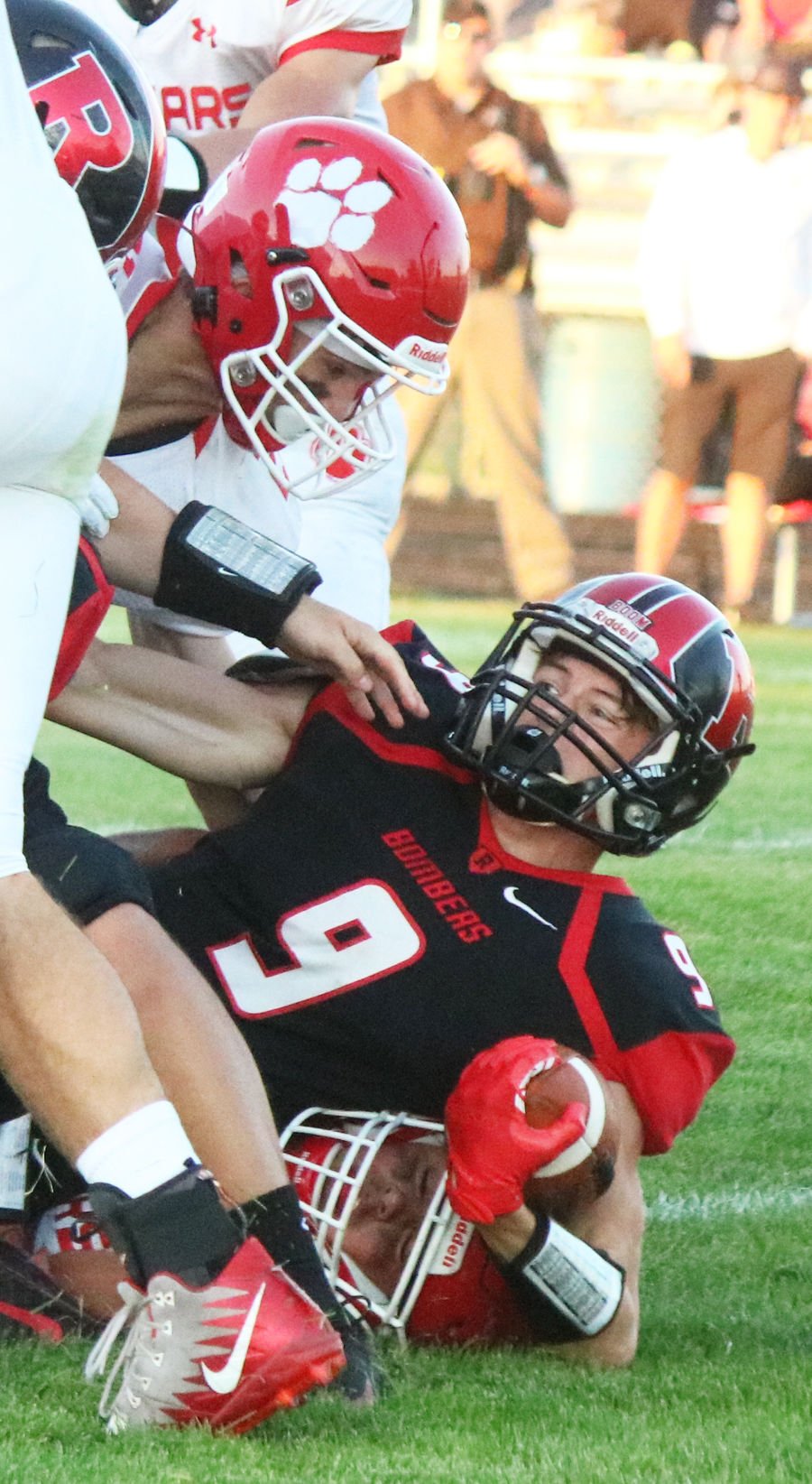 Kankakee Valley last secured possession of the Cracker Barrel in 2017.

No matter what the game will be like in these uncertain times, one thing won’t change in Rensselaer Central’s contest at Kankakee Valley Friday: The Kougars want the Cracker Barrel back in their trophy case.

It’s been three years since KVHS has seen the Barrel tucked away behind glass, losing close games in 2018 and ’19. It appeared the Kougars would take home the prize that both teams have played for 47 years by holding a 9-0 lead over the host Bombers.

But Rensselaer, which owns a 31-18 edge in the Barrel series, responded by scoring 13 unanswered points, including a touchdown pass from quarterback Eli Hickman to Noah Bierma with 1:32 left in the game, to deny KV a chance at the upset.

Both teams played a spirited game under normal conditions last year. But with both rivals combining to stiff-arm COVID-19 all summer, the atmosphere will have a different feel to it.

At least until the ball goes flying during kick-off.

“I know the boys are wanting to get back on the field under Friday night lights, but they’re excited about who they’re playing as well,” Kougars coach James Broyles said. “It’s going to make for an interesting evening. Once the game gets going, it will fun.

“Maybe playing on Friday will bring back a little normalcy. It’s been a crazy ride.”

“We’re excited to play in their new palace,” said RCHS coach Chris Meeks. “We’ve heard nothing but great things about it. It should be fun for the kids.”

The Kougars will lean on a passing offense that features senior Eli Carden (6-3, 180) behind center and a veteran receiving corps of Tyler Tinnell and Markus Ritchie and tight end Tyler Feddeler, who also anchors KV’s defense at linebacker.

“Carden is a playmaker in the passing game and he has some nice receivers to throw to,” Meeks said.

“It’s the same stuff we’ve done in the past,” said Broyles, who relies on offensive coordinator Ryan Armstrong to call plays. “We’re a multi-set offense. We try to be as balanced as possible. We’re fortunate to have a quarterback who has a live arm like Eli, but it’s high school football. You can’t rely on that all the time. You have to try to be balanced. We do rely on the run more than normal.

“We do have some players who we’re fortunate to get back at some key positions from last year.”

They will be asked to protect Carden as well as create holes for the backs.

“It’s always nice to have your quarterback come back. He understands what is going on within the game and just the experience itself,” Broyles said. “We have a few guys on the offensive line back, and those are important positions to have coming back. They understand every scheme that you have and they understand what Friday night brings.”

Swafford was a sledgehammer behind KV’s blue collar line in 2019, collecting 100 or more yards in seven of the team’s 10 games.

“It’s a tough position to fill, but we were fortunate enough last year to get some kids a little bit of time in the backfield to adjust to the speed of the game,” Broyles said.

Besides Feddeler, other defensive stars for the Kougars include Tinnel, Ritchie and Lamka as well as a combination of the linemen above.

For Broyles, the game will come down to conditioning since the pandemic disrupted falls sports practice time throughout the state.

“All of this have this situation where you didn’t have a spring to go over stuff with kids, either in the classroom or in the gym or even outside,” he said. “And then not having the summer, that’s a big deal for conditioning.

“We’ve done a great job with the little time we’ve had putting forth the effort to get ourselves conditioned and ready for a season. You don’t have the reps you’ve had normally or go to camps like you’re used to each summer. But you work with what you had to work with this year time-wise.”

Broyles expects the Bombers to be the toughest opponent among non-conference foes for his players. RC’s unique offense and the fact it is the first game will challenge KV’s young and talented squad.

“They always get kids who play disciplined and play physical,” Broyles said of the Bombers. “With coach Meeks, you’re not sure what you will get. He may come out and show an empty backfield set. But he always puts his kids in a position to win a football game.”

If there are no disruptions to the season, KV will close the 2020 campaign with five straight Northwest Crossroads Conference games, including meat-grinder games at Lowell (Sept. 25) and home against Class 4A No. 2 ranked Hobart (Oct. 2) and state powerhouse Andrean (Oct. 9).

Meeks, meanwhile, said KV’s size is what jumps off the page when scanning his team’s scouting report. The Kougars feature several players in the 240-pound range with a couple at 300 or more.=

“They’re going to out-size us by quite a bit,” he said. “That’s a big concern. I don’t have too many 200-pounders on my team, let alone that size.”

“We think they’re very athletic. Just like them, we have some kids we’re very high on, too,” Meeks said.

“I think our skill players are very strong, but we also like our guys up front.”

Doing the dirty work are veterans Ky Risner, who is in his third year at center, and senior all-state player Max Korniak at tackle. Sophomore Justin Cree also returns.

“Big” would be a fitting word for Ayden Randolph, who piles 330 pounds on a 6-foot-6 frame. He is another option for Meeks and his staff.

The line will open holes for perhaps the team’s biggest strength: a rotation of talented running backs. They include Addison Wilmington, a senior who rushed for over 1,000 yards last season, as well as the Kidd brothers: senior Dalton, who sliced up Andrean’s defense last year for nearly 200 yards, and junior Dylan, who was penciled in as the team’s primary back last season before a knee injury ended his season.

“He looks to be 110 percent,” Meeks said of Dylan. “His brother Dalton, in the last three games of the season, he averaged over 10 yards per carry.”

“Both of our tight ends are going to be major threats in our play-action game,” Meeks said. “We look forward to teams that load the box against us because Tate has put a lot of time in with Bill Reagan the last three, four years in South Bend and it’s time to reap the benefits of that.”

Senior Lorenzo Ramirez will fill the fullback spot besides anchoring a linebacking corps that features Stokes, Pickering and the Kidd brothers.

Pickering is new to the defense.

“He’s put a lot of time in the weight room and got a lot stronger,” Meels said. “He’s confidence is up and he brings another dimension to the linebacking corps.”

Defensive ends include Korniak and Risner, with Randolph, Cree and Trenton Simmons at the tackle spots.

Wilmington returns at one cornerback, with Hesson moving from linebacker to the safety spot.

The other cornerback spot will feature a rotation of Jacoby Tiede-Souza, Lakin Webb and Chaz Mullins.

Providing the kicking duties will be junior Luke Dixon, who stars on the soccer field. Dixon is the first dual-sport athlete at RCHS in recent memory and will punt as well as kick off and line up for extra-point kicks and field goals.

“He’s got a great, strong leg,” Meeks said. “He takes his soccer hat off and comes to play football for us. It will be fun cheering him on on the soccer field, too. If I had to guess, 70 to 80 percent of schools in Indiana have dual-sport athletes. It’s time for us to do that, too, and it’s working out well for us so far.”

Playing in a pandemic

Preparing a high school team during a pandemic has been a entirely new challenge for coaches and players this summer. Pre-season conditioning and practice time were slashed by COVID-19 guidelines, so both Meeks and Broyles expects to use a rotation of players this week.

“I don’t have a pulse on this thing at all,” Meeks said. “I don’t know what to expect. You and I can talk about what KV has and Rensselaer has, but you’ve got kids that sat idle for three, four months. I think depth is going to be important. Come Friday nigt, I do know for a fact there’s going to be some kids playing who didn’t plan on playing who are going to be out there. We’ve got several kids going both ways, and KV does, too, so both lineups better be ready to go.”

Like KV, Rensselaer had its camp week and summer scrimmages erased while the world deals with the virus. It will likely be weeks before the players get conditioned enough to play four quarters of frenzied football.

“We normally start June 1 and gradually build up to team camp; building our team there,” Meeks said. “Then we do our scrimmages in the summer, and we haven’t had that. We’ve only been together since July 6, and even at that, we only had two practices a week until Aug. 3. We really haven’t been together that much. You can tell they love playing together. They get along great. They push each other. They all work hard.

“The first three, four games will be big in determining a lot about ourselves. It’s going to be a learning process, because we didn’t have the summer like we normally do. We are very optimistic, but we also know we’re going to go through some growing pains the first three, four weeks.”

Meeks did praise players and parents for keeping high school football on track for the fall. Most schools will begin the season as planned.

“We’re just feeling our way through this. None of us have been through this before. It’s been a learning process for everybody,” Meeks said, “but I want to point out, these kids have been phenomenal throughout Indiana. And parents, too, to give us this opportunity to play Friday night. I have a feeling if we were all betting people, two months ago we would say this is probably never going to happen.”