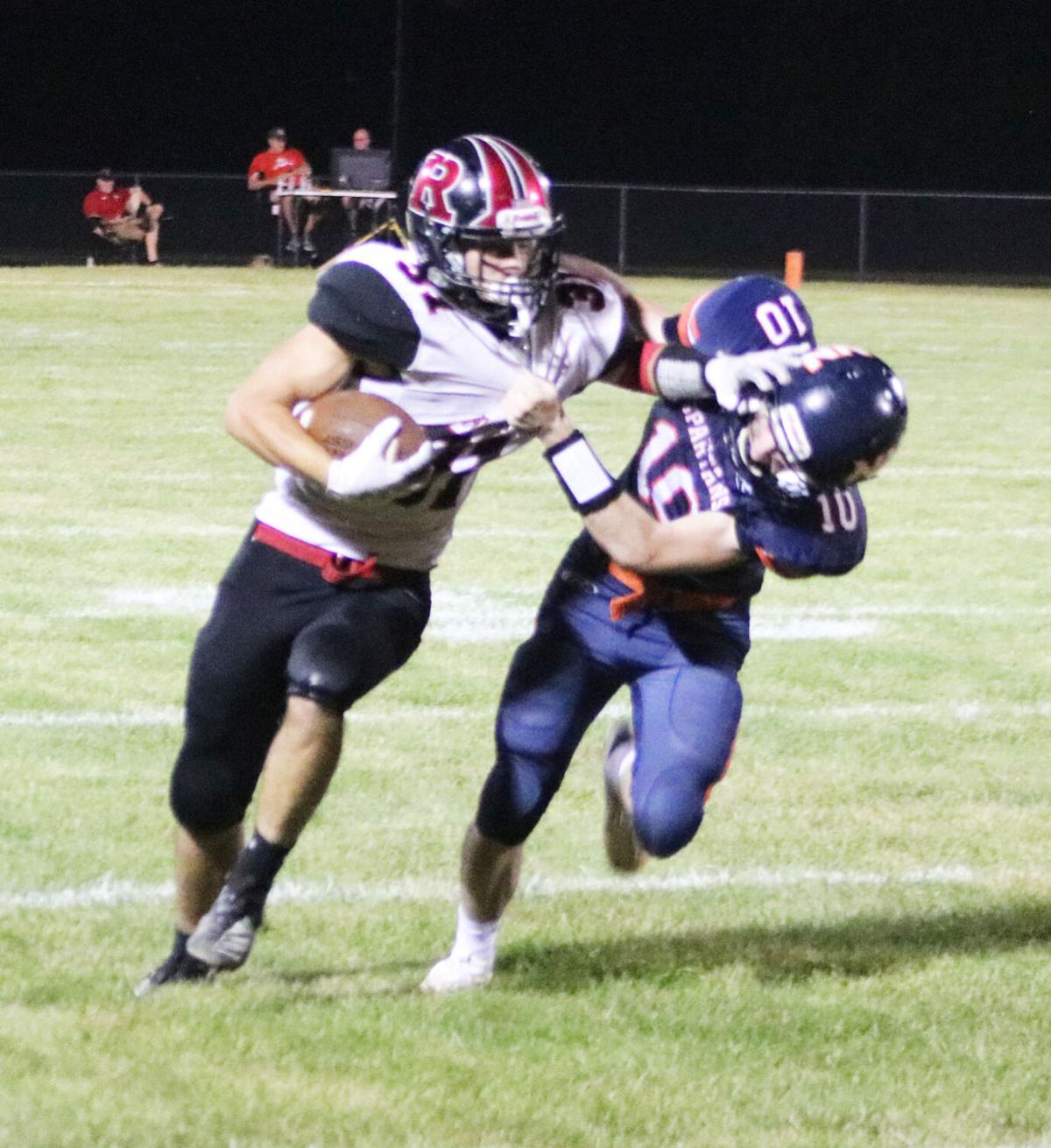 RCHS senior Kelton Hesson attempts to deflect North Newton defender Lane Zander during a pass play that netted a first down for the Bombers. 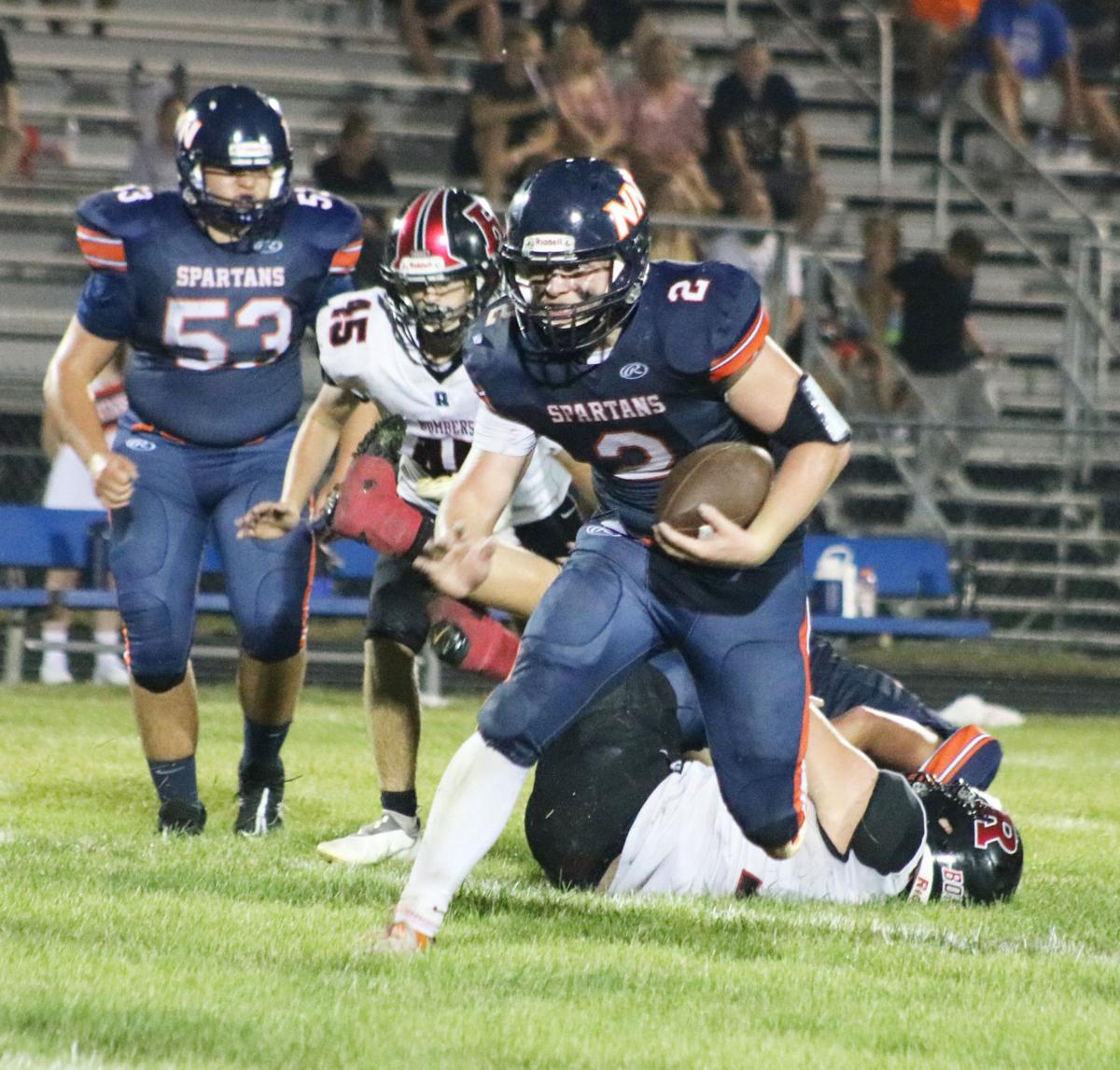 North Newton sophomore Kadyn Rowland led his team’s ground game with 88 yards, gaining many of his yards on second and third efforts.

RCHS senior Kelton Hesson attempts to deflect North Newton defender Lane Zander during a pass play that netted a first down for the Bombers.

North Newton sophomore Kadyn Rowland led his team’s ground game with 88 yards, gaining many of his yards on second and third efforts.

Though the Bombers remained unbeaten with a 35-8 victory over the hosts at Dick Gilbert Field, they had to grind it out over four quarters to pick up their 30th straight win over North Newton.

Luckily for RCHS, it has the ultimate grinder in senior tailback Dylan Kidd, who gained 177 yards on 19 carries with four touchdowns. He scored on runs of 1, 9, 27 and 17 yards, capping off Rensselaer’s three scoring drives in the first half when the Bombers took a 21-8 lead into halftime on a hot, muggy night.

RCHS (2-0) possessed the ball four times in the second half, scoring twice. One of the scores came after a blocked punt that was scooped up by lineman Adam Ahler, who rumbled 28 yards to North Newton’s 17-yard line. Two plays later, Kidd scored his fourth and final touchdown from 17 yards out with 10:35 left in the game.

Rensselaer’s other score came on a 20-yard touchdown pass from senior quarterback Tate Drone to fellow senior Kelton Hesson that gave the Bombers the lead for good at 14-8 in the first quarter.

It’s the third time Zander has returned a punt or a kick-off for a touchdown in just two games. Last week against South Newton, Zander returned a pair of punts in his team’s 45-8 win over the Rebels.

Zander didn’t see another kick-off the rest of the night and Rensselaer didn’t punt the ball all night.

“I knew he was fast. I didn’t know he was that fast,” Spartans coach Scott Rouch said. “That’s two games in a row where he showed he’s fast. They all had angles. But he was second in the regional in the 100 and as a sophomore, he can run. We’ve got that going for us.”

“I was really proud of them,” Rouch said. “I thought they played really hard. That’s what I preached, you’ve got to play hard. It’s not going to be easy, and yeah, they’re good. But we missed opportunities. We missed opportunities to score. We missed a guy wide open on a pass. We didn’t get it to him early. We had several opportunities to stop their drives. We had them in several third downs but didn’t get it done. Those things matter in a game when you’re playing somebody good. But the fight was good.”

Gagnon missed on five passes, but did manage to collect 50 yards on 17 carries. Rouch believes Gagnon will only get better with more reps behind a line that has to get better at sustaining blocks.

“He’s never played there, but he’s taken on the role,” Rouch said of Gagnon. “I know he gets down on himself. He’s down on himself because he missed on that pass, but I just told him to keep working at it. And he is. He’s getting better every day. He comes in with a good attitude.

“We do have to get better passing. Up front, we’re not as good as pass blockers as we need to be. We’ve got to get better.”

Kadyn Rowland led the Spartans (1-1) with 88 yards on 17 carries and was a workhorse in his team’s 14-play drive late in the third quarter. The drive, however, stalled and North Newton was forced to punt.

Connor Scotella’s punt was blocked by RCHS lineman Jordan Cree, with the ball bouncing in front of Ahler, who nearly took it in from the 45-yard line.

North Newton features several talented sophomores at the skill positions, with Rowland, Zander and Gagnon expected to produce throughout the season. Schoon, a senior, is another weapon in the backfield.

“I’ve got a good combination of speed and someone who runs straight ahead,” Rouch said. “I keep telling Rowland don’t try to bounce because you’re not the fast guy. Run over people and get me at least three yards. Do what you do best. Schoon can bounce because he’s got speed. I guess it’s kind of a double-edge there.”

The Spartans played short-handed, losing three players to injury and six more to contact tracing due to COVID.

“We had three starters out,” Rouch said. “Here, one guy’s out I’ve got to move three guys around to get it fixed.” The kids we put in played hard and did well and that’s all I can ask.”