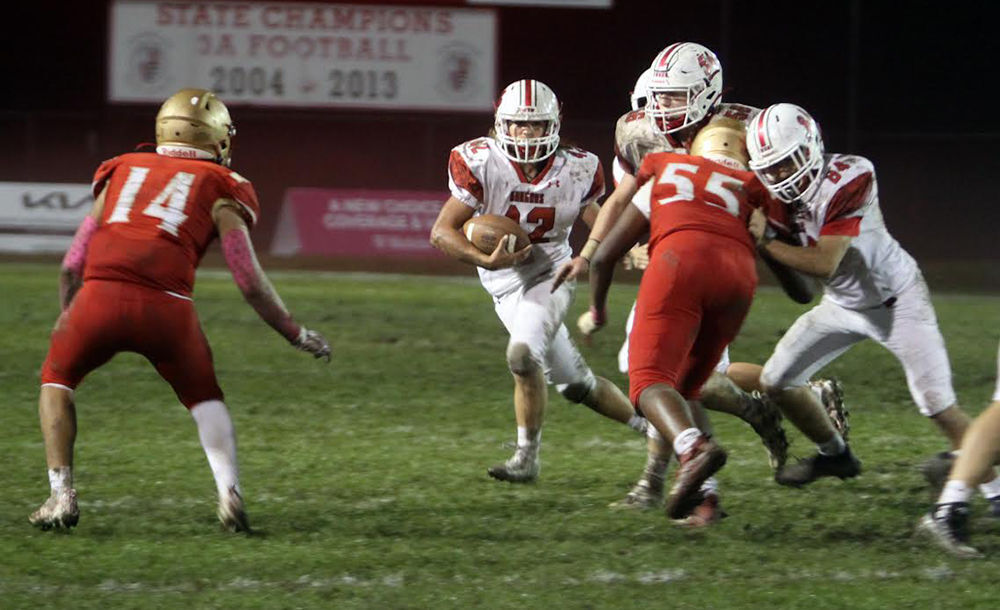 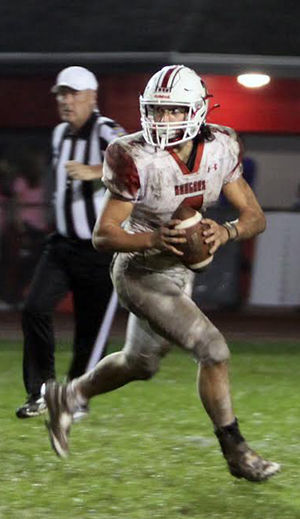 KVHS senior Grant Stowers looks for a receiver downfield as he rolls out after the snap.

KVHS senior Grant Stowers looks for a receiver downfield as he rolls out after the snap.

MERRILLVILLE — Kankakee Valley never found its footing on Friday, Oct. 8 as the Kougars were annihilated by the host Andrean 59ers on a field more ready for mud drags than team sports.

After a week of hosting soccer sectionals on the same field during which it rained almost daily, the field was a quagmire of ooze. Andrean defeated the Kats 38-3, and if it had not been so slick, the score might even have been more lopsided.

Neither team initially seemed able to score throughout much of the first quarter until the 59ers managed to put it over the line near the end and go up 7-0.

KV senior quarterback Grant Stowers and company put together a nice drive as the quarter ended, but it stalled on the 20-yard-line after switching ends and went for it on fourth-and-four, turning the ball over on downs.

Andrean quarterback Scott Ballentine unleashed a long pass to his brother Robby, followed by another to Patrick Clacks to reach the red zone, but the KV defense held and forced a field goal attempt that was wide right.

Later in the second, the Kougars were again stopped but used a fake punt play that, when 15 yards were added for a personal foul, put KV in a good field position to score.

Unfortunately, the drive stalled again and KV settled for a Cade Capps field goal to make it 7-3. With just 15 seconds left in the half, Ballentine again passed for a TD that put them up 14-3.

Andrean would add another touchdown and a successful field goal in the third quarter and post two more TDs in the fourth to arrive at the final margin.

KV struggled to put plays together and seemed unable to move the ball at all in the second half while Andrean took advantage of every miscue.

One bright spot for the Kougars was the work of Max Lustig, who stepped up to give Jack Lamka a break late in the game and showed he was also capable of gaining yards on the ground.