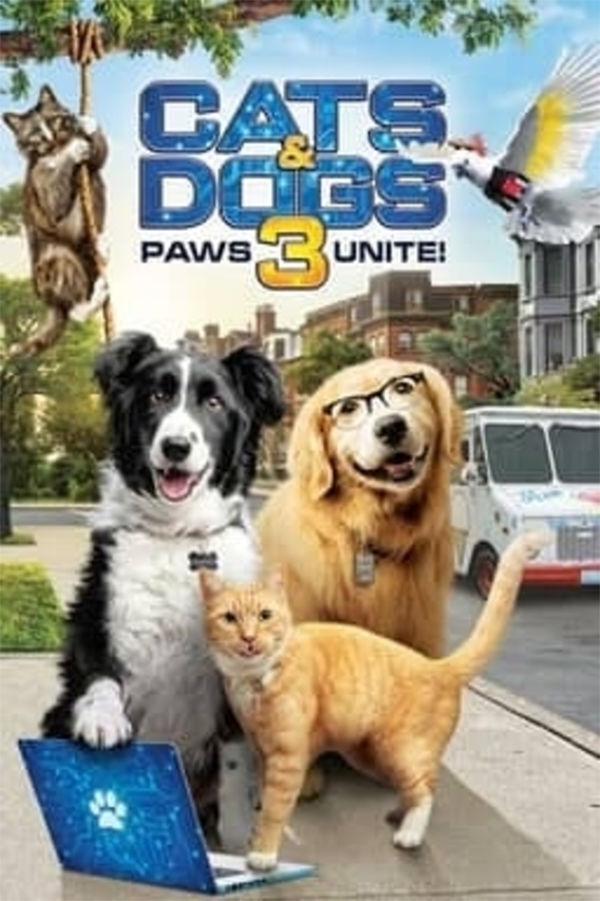 “Cats & Dogs 3: Paws Unite” is available On Demand through online streaming and likely through your local cable provider. The film is rated PG for rude humor. Its running time is 84 minutes.

“Cats & Dogs 3: Paws Unite” is an experiment in how bad a movie can be while still staying completely harmless.

There’s nothing “offensive” here, no bad messages or dangerous philosophies or seriously objectionable material. I suppose the “rude humor” that earns the movie a PG rating isn’t exactly tasteful, but I can’t imagine parents thinking that this movie actually crosses any sort of line.

For all intents and purposes, this movie is completely fine for children, and yet they shouldn’t watch it because it is unoriginal garbage.

The film takes place in a world where cats and dogs moonlight as secret agents while their owners are away. They do this to keep rogue cats and dogs in check so humans don’t stop loving them.

This includes making sure cats and dogs don’t fight with one another (even though they really want to) because humans find that particularly off-putting.

Roger the Dog (Max Greenfield) and Gwen the Cat (Melissa Rauch) work in surveillance, but are forced into field roles once a plague of cat-and-dog fighting starts sweeping the neighborhood. They learn that a character voiced by George Lopez is behind a wave of brainwashings, but what kind of cat or dog sacrifice humans’ affection for their own kind just to destroy their affection for the other?

The answer is the kind that isn’t a cat or a dog. Pablo the Parrot (Lopez) is trying to take out both types of popular pets so humans will be steered toward buying “other” pets like him. He operates out of a pet store alongside a lizard, a tarantula, snakes, frogs, but not fish. Fish don’t count.

The movie can’t possibly fill 84 minutes with an elaborate spy story, so it throws in subplots about Roger and Gwen’s teenage human owners. Roger’s owner Max (Callum Seagram Airlie) is a tennis prodigy with an overbearing mother (Kirsten Robek) whose game is beginning to suffer under the weight of his crushing training schedule.

THINKING ABOUT HEALTH: No relief from high drug prices in the near future

MORRIS: Most important politics is local

Gwen’s owner Zoe (Sarah Giles) is an aspiring musician whose floundering musician father is about to get them evicted from their apartment over his inability to pay the rent.

I might feel more sympathetic toward the father if he wasn’t shown to have a staggeringly poor work ethic in other areas of his life. This is a guy who doesn’t even bother to heat up frozen food. And he waits until he’s been served with an eviction notice to even look for a non-music job.

I felt sorry for Zoe, not because she’s might have to move to a building that doesn’t allow pets, but because she has this deadbeat for a father.

Roger and Gwen notice that their humans are in a funk, so they decide that the best way to solve each of their problems is to get them together. This leads to a tired “trapped in an elevator” storyline where the two teens learn that they need to get off their phones and pay more attention to the world around them.

That’s a noble message, and so is the emphasis on courage and teamwork. The problem is that these inspirational themes are buried in a movie that is itself embarrassingly uninspired.

“Cats & Dogs 3: Paws Unite” is little more than an overlong string of bathroom jokes. It doesn’t even mine the rich subject of dog and cat behavior for jokes that often because that would get in the way of the bathroom jokes.

To my understanding it has almost nothing in common with the previous two installments of this series, which I haven’t seen, but I know came out 19 and 10 years ago, respectively. Even if those movies were good, the target audience of little kids is aging out of this franchise between sequels.

Then again, the target audience of little kids is hopefully too mature to enjoy this movie, which is too dumb for anybody.