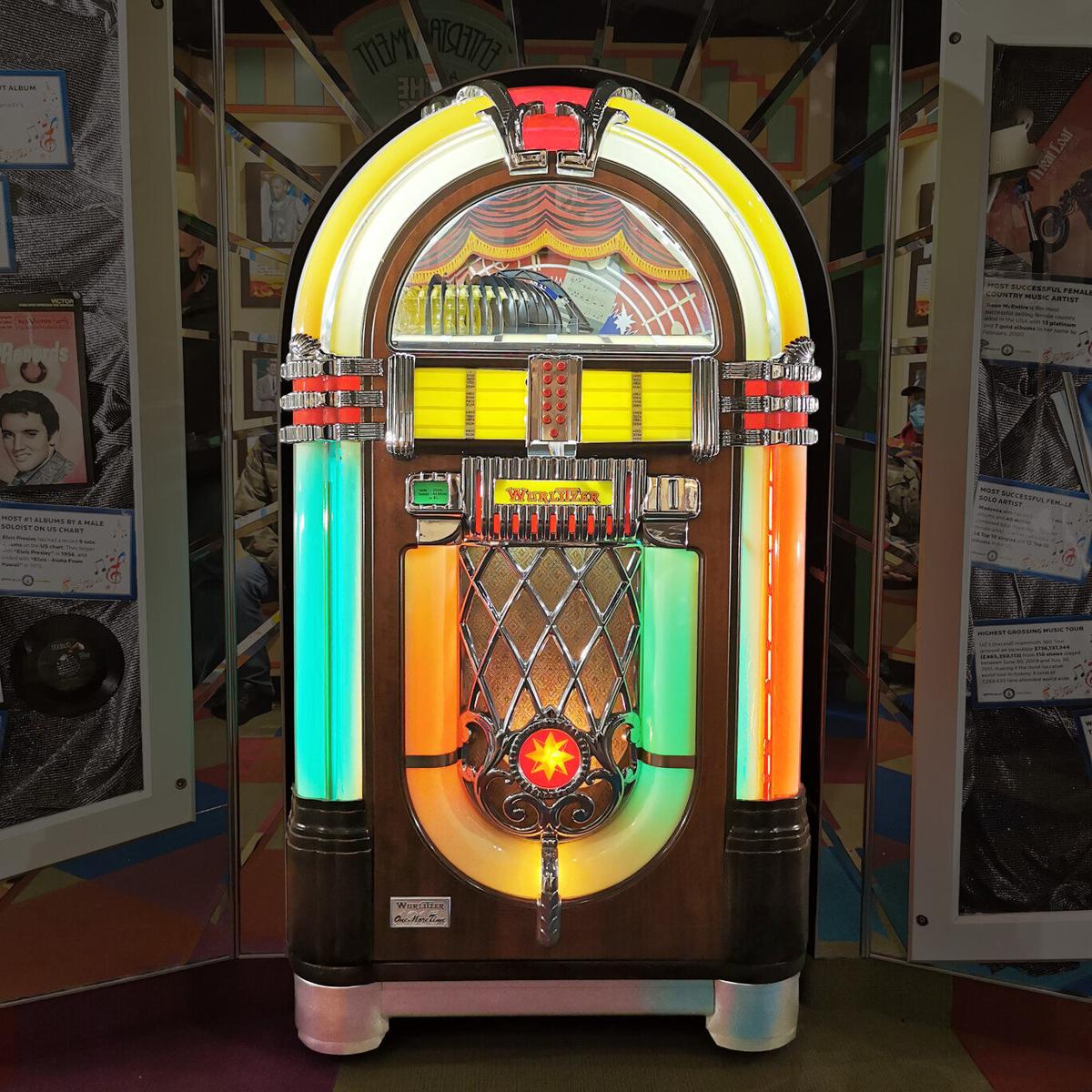 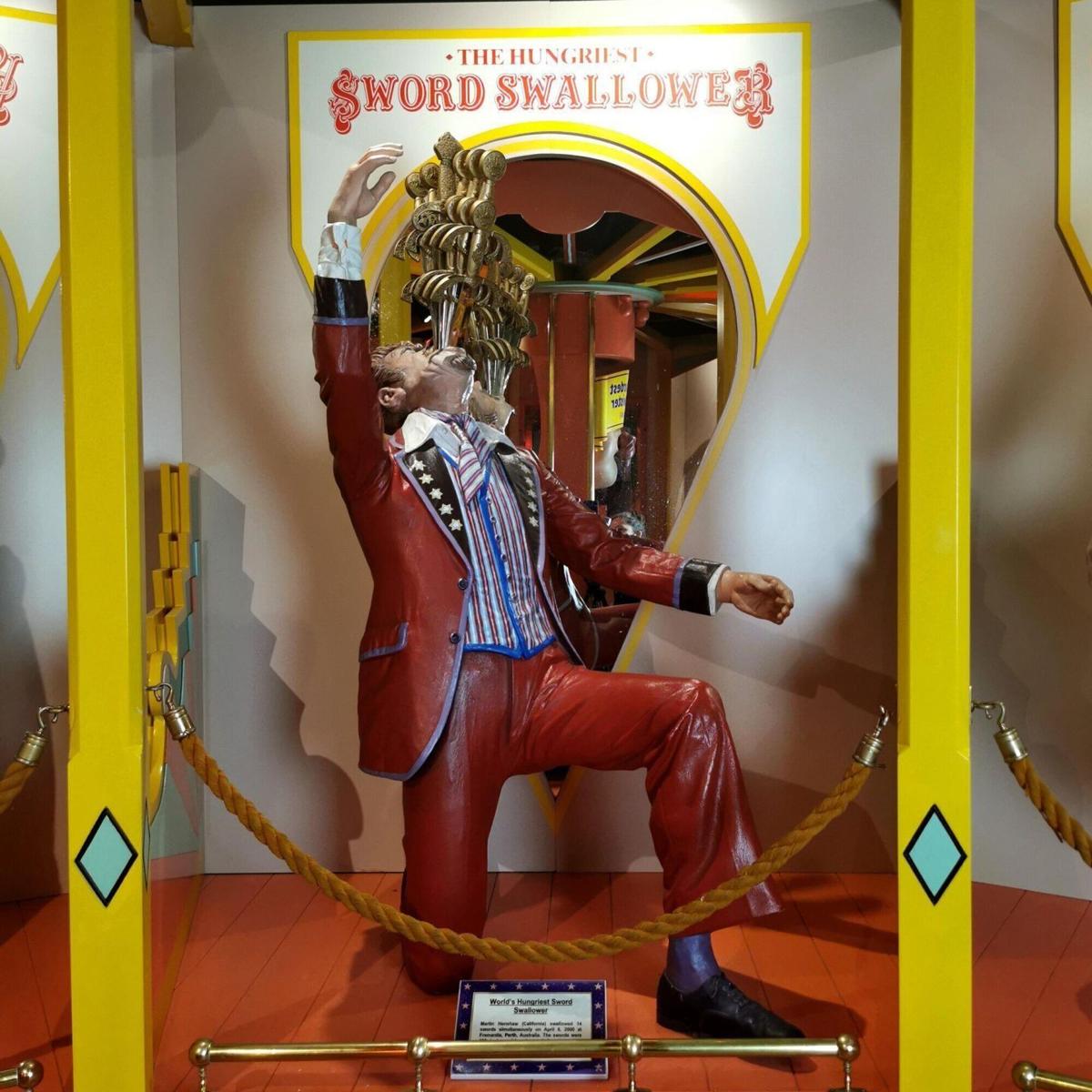 Sculpted, 65-inch-tall portrayal of sword-swallower Martin Henshaw, who could swallow 14 swords at once, with a sign (“The World’s Hungriest Sword Swallower”) (est. $500-$1,000).

Sculpted, 65-inch-tall portrayal of sword-swallower Martin Henshaw, who could swallow 14 swords at once, with a sign (“The World’s Hungriest Sword Swallower”) (est. $500-$1,000).

INDIANAPOLIS – Collectors interested in owning a genuine Guinness World Record item, ranging from the world’s smallest bicycle to the world’s largest pinball machine (Atari Hercules) to a coin-operated animated electric chair exhibit, will get their chance in an online-only auction of items previously displayed at the now-closed Guinness Museum of World Records in Niagara Falls, Canada. Every item in the auction is accompanied by an official certificate of authenticity.

The auction is being conducted by Ripley Auctions in Indianapolis and the catalog is online now, at www.ripleyauctions.com/online-auctions/. Bidding ends on Friday, February 12th, at 5 pm Eastern time and is available thru LiveAuctioneers.com, Invaluable.com and Auctionzip.com. Phone and absentee bids will also be taken. The preview is virtual, at www.ripleyauctions.com.

The auction is officially titled Ripley’s Remarkable Rarities Presents Guinness World Records Museum of Niagara Falls Auction. Ripley Entertainment, Inc., which is not affiliated with Ripley Auctions, owns the Guinness World Records brand. It has operated the museum in Canada since its grand opening in 1978 until its closing in September 2020, making the exhibit items available.

“In less than twenty hours since the posting of the catalog online, we’ve generated over 500,000 lot views and $200,000 in early bids,” said Dan Ripley, president and owner of Ripley Auctions. “We encourage everyone to watch and bid live, while enjoying a unique and entertaining live-stream event. The live-stream production is unique to any live auction event I’m aware of.”

The world’s smallest wheeled, rideable bicycles were built and ridden by entertainer Charly Charles in his Las Vegas act at the Circus Circus Hotel. The one in the auction has an estimate of $500-$1,000, as does the world’s smallest camera – a round model made by the Petal Optical Company, manufactured in Occupied Japan in 1947-1948. A roll of film is included. A candidate for top lot of the auction is a Wurlitzer Model OMT 1015 jukebox, restored (est. $4,000-$5,000).

The Atari Hercules pinball game, which holds the record for world’s largest pinball game, carries an estimate of $1,500-$2,500 and includes a painted sign of the game and several wall plaques. The coin-operated, animated electric chair exhibit, complete with fog machine for smoke effect, features a life-like electric chair execution of an animated character. Included is a pedestal where the coin acceptors are located, plus wall plaques for criminal justice records (est. $1,000-$3,000).

A 49-inch-tall fiberglass character dedicated to Shigechiyo Izumi, billed as the World’s Oldest Man (1865-1986), includes backlit panels with historic facts that occurred during his lifetime, dating back to the Civil War (est. $1,000-$2,000). Also offered is a life-size sculpted character of Pauline Musters, billed as The World’s Smallest Woman, with a 22 ½ inch by 17 inch framed photograph of Ms. Musters with a heading and text giving facts about her life (est. $400-$800).

A custom sculpted, 68-inch-tall character portraying The Tattooed Lady – Krystyne Kolorful – who had 95 percent of her body surface tattooed, with a 32 inch by 49 inch “Most Tattooed Lady” PVC sign, should bring $1,000-$2,000; while a custom sculpted, 65-inch-tall portrayal of sword-swallower Martin Henshaw, who was able to swallow an astounding 14 swords at once, with a PVC sign (“The World’s Hungriest Sword Swallower”) has an estimate of $500-$1,000.

The contents-only of a large cabinet of bugs, creatures, critters and interesting collectibles – with many rack cards for items ranging from the world’s largest bat to the world’s largest tortoise, plus taxidermied creatures like a gerbil, giant stick insect and giant tarantula – should sell for $500-$1,000. Also, a wooden CN Tower model, with a record card (for “Tallest Towers”) and many other record cards for Skydome, space flight and astronauts, has an estimate of $300-$500.

Opening Day attractions at the museum on June 16, 1978 included Henry LaMothe, who staged a daring skydive from 40 feet into feet of water, and Sandy Allen, the World’s Tallest Woman. Over the years, the tradition continued, with visits from record holders such as Gary Shawkey (Fire Walker), who performed for guests laying on a bed of nails, while staff stood on his chest.

Ripley Auctions offers auction services for estates, collections and personal property for individuals, heirs, executors, legal representatives and commercial clients. It is a state-of-the-art global marketplace for arts, antiques, jewelry and memorabilia. Ripley Auctions is always accepting quality consignments for future auctions. To inquire about consigning an item, an estate or collection, call (317) 251-5635; or, you can e-mail them at sales@ripleyauctions.com.