The top two awards given out went to Alysse Niewoehner who received the Roland F. martin Award for Academic Achievement and Nikolai De La Paz Marino who received the Robert Tillema Congeniality Award. They are shown with teacher and Wheatfield Lions Club member Tom Sparks. 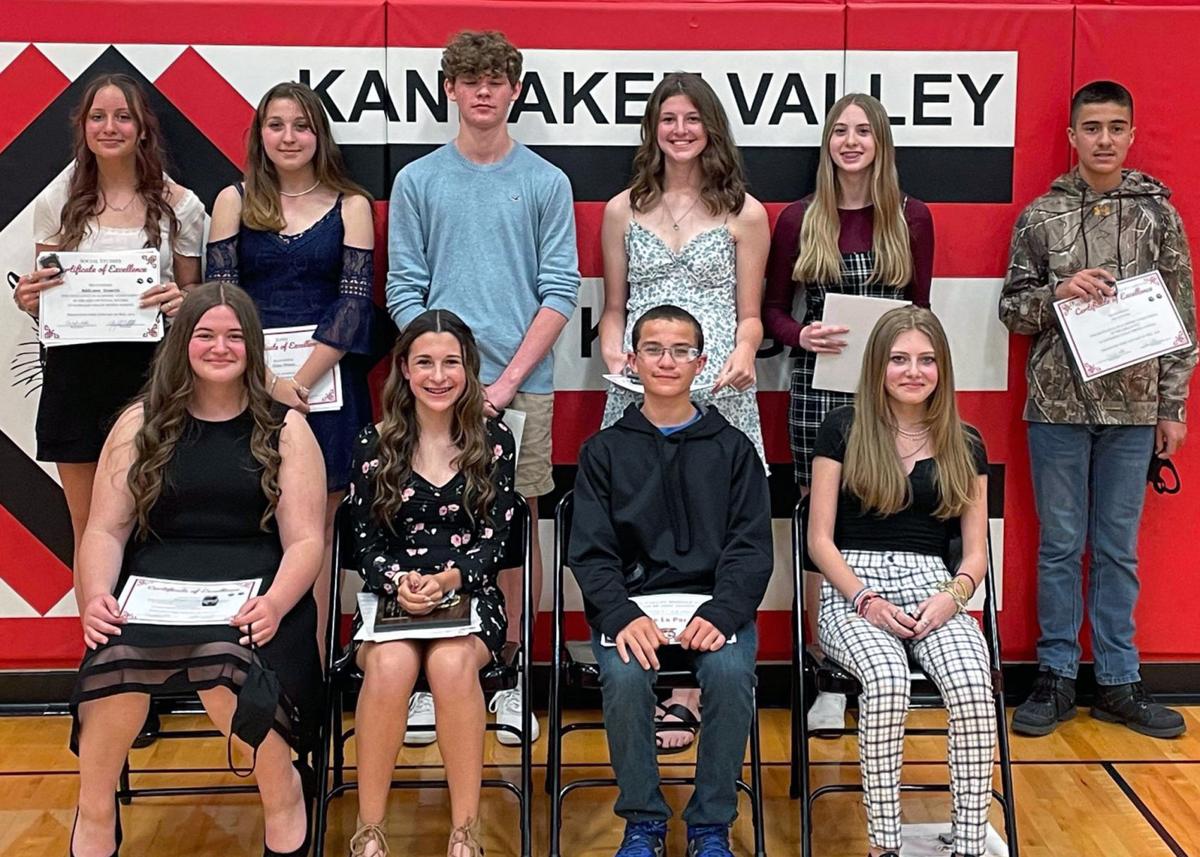 The top two awards given out went to Alysse Niewoehner who received the Roland F. martin Award for Academic Achievement and Nikolai De La Paz Marino who received the Robert Tillema Congeniality Award. They are shown with teacher and Wheatfield Lions Club member Tom Sparks.

WHEATFIELD, Ind. — Following a year that featured a virtual awards ceremony last Spring, this year the administration and staff at Kankakee Valley Middle School were able to hold an in-person Awards Night on Tuesday, May 25.

The Top Ten Academic Students in each academic discipline and up to five “ROAR” award students that had shown marked academic or other progress were honored at the invitation-only ceremony. Additionally, several other awards were presented after a welcome by first-year Principal Christopher Fields.

Eighth-grade teachers then took turnes announcing their Top-Ten and ROAR Award winners, as well as presenting a special medal to the top student in each of their classes. The awards were additionally broken down into the two different Pods in eighth grade.

For Pod 81, Addison Drenth won the Science Medal, while Kaylin Curtis won the medals for Mathematics, Language Arts and Social Studies, as well as the medal for Physical Education and Health. For Pod 82, Carly Bunce was awarded both the Science and Math medals as well as the Orchestra Director’s Award, while Alysse Niewoehner received the honor for Language Arts, Social Studies and Project Lead the Way. Additionally, for the entire eighth grade, Sammy Garcia was the recipient of the medal for Art, Clare Hasara won for Band, Maygan Collins for Orchestra, Madison Ames for Choir, Brady Sampson for Advanced Physical Conditioning and Axl Sowder for College and Careers. Briar Campbell was awarded the Band Director’s Award.

The two most sought-after awards were presented last. Both are sponsored by the Wheatfield Lion’s Club and the winners receive a take-home plaque and monetary award as well as have their name added to the permanent plaques that hang in the main hallway at the school.

Teacher and Wheatfield Lions Club member Tom Sparks presented the Robert Tillema Congeniality Award to Nikolai De La Paz Marino. De La Paz Marino was voted to this honor by his classmates in eighth grade. Four eighth-graders are nominated for the honor and the students then vote for their choice as most congenial to all. Also nominated were Allison Gibbons, Preston Kritlow and Alivia Robbins.

Assistant Principals Josh Pearman and Andy Sargent then presented the Roland F. Martin Award for Outstanding Academic Acheivement to Alysse Niewoehner. The award is given in memory of former teacher and Assistant Principal Rollie Martin who extolled his students to not only seek academic achievement but also exhibit good citizenship and leadership. Fields then closed the eighth-grade ceremony.

Separate ceremonies were held during the day for the sixth and seventh grade winners in the middle school commons.