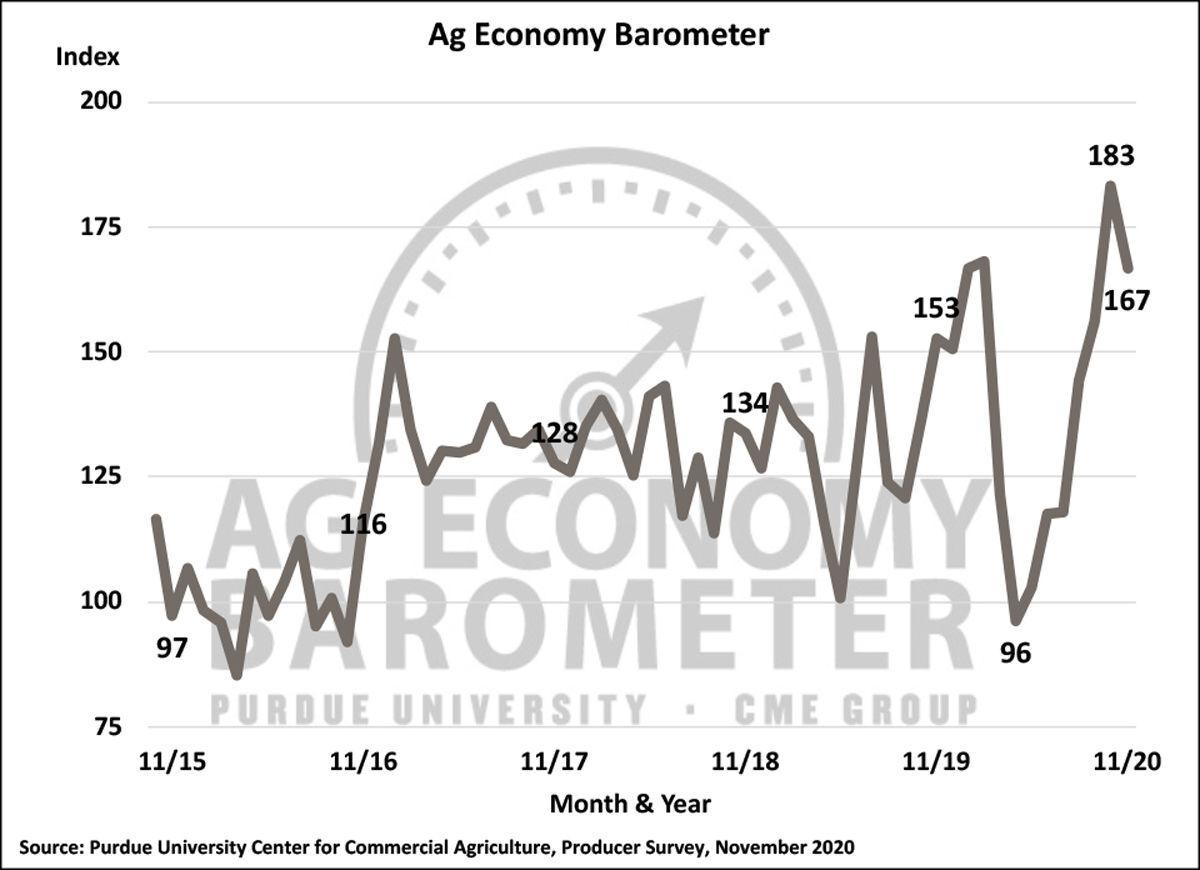 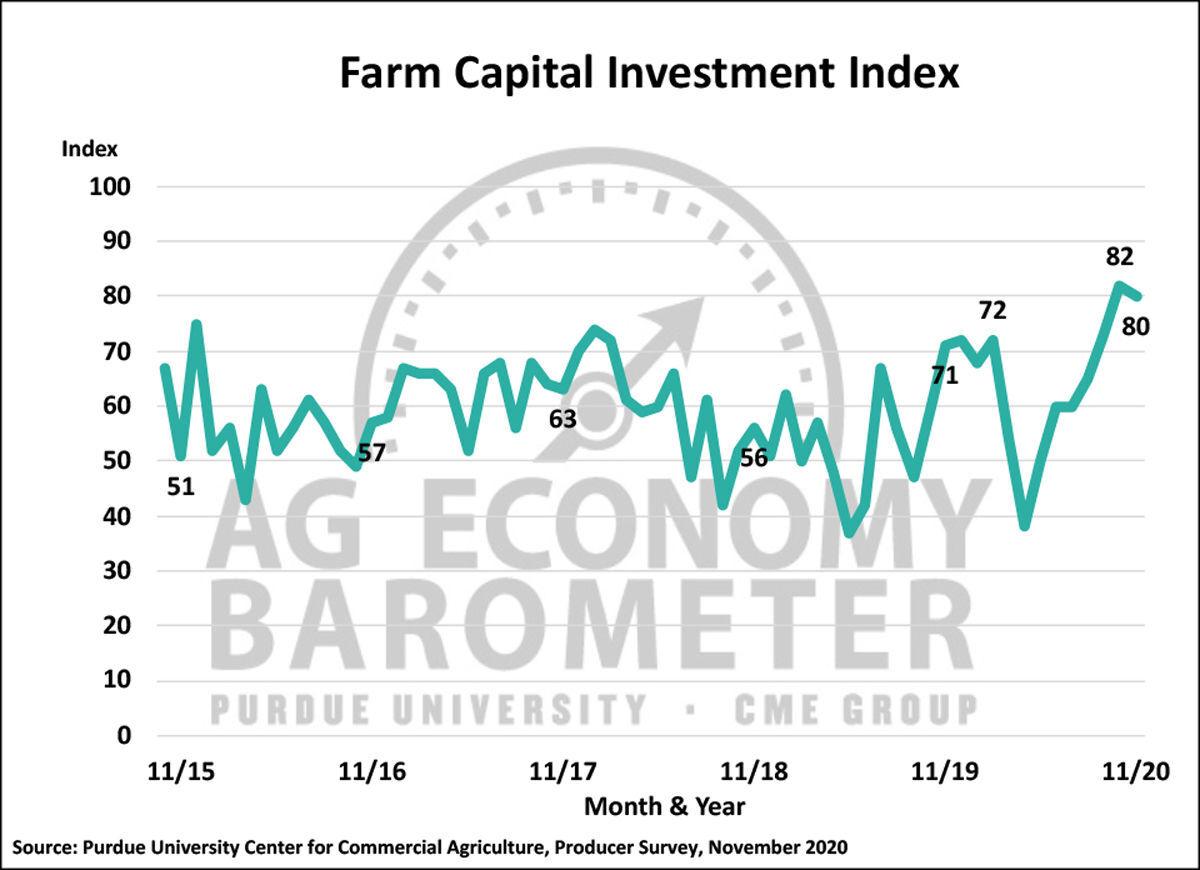 WEST LAFAYETTE — The Purdue University/CME Group Ag Economy Barometer dropped 16 points to a reading of 167 in November, down from its all-time high set just one month ago.

The decrease in sentiment was led by farmers’ more pessimistic view towards the future of the agricultural economy with the Index of Future Expectations falling 30 points to a reading of 156 in November.

At the same time the on-going rally in commodity prices and CFAP-2 payments continued to support producers’ view of current economic conditions as the Index of Current Conditions rose 9 points in November to 187, an all-time high for the Current Conditions Index.

The Ag Economy Barometer is calculated each month from 400 U.S. agricultural producers’ responses to a telephone survey. This month’s survey was conducted after the election from Nov. 9-13, 2020.

Producers were more pessimistic about future economic conditions on their farms in November than they were just a month earlier, which is the opposite of what happened following the November 2016 election. That year producers became much more optimistic about the future following the election and, in turn, that optimism about the future helped drive the Ag Economy Barometer up sharply in late 2016 and early 2017.

To learn more about what might be motivating shifts in producers’ sentiment pre- and post-November election, several new questions regarding whether they expect to see changes to regulations, taxes, and other aspects of the agricultural economy (see below) in the next five years, were included on both the October and November surveys.

Month-to-month shifts in responses to these questions provide some insight into the decline observed in the Index of Future Expectations that took place this month.

Comparing results from October to November, far more producers in November said that, over the next five years, they expect to see 1) environmental regulations impacting agriculture to tighten; 2) higher income tax rates for farms and ranches; 3) higher estate tax rates for farms and ranches; 4) less government support for the U.S. ethanol industry and 5) a weaker farm income safety net provided by U.S. government program policies. On the November survey, 77 percent of respondents said they expect more restrictive environmental regulations five years from now vs. 41 percent who felt that way in October.

The percentage of producers who said they expect government support for the U.S. ethanol industry to decline nearly doubled from October to November with 33 percent of respondents in November expecting government support to decline over the next five years compared to just 17 percent in October. This was similar to the shift in attitudes regarding the farm income safety net as 35 percent of respondents in November said they expect to see a weaker farm safety net five years from now compared to 18 percent who felt that way in October.

For a complete breakdown of these results, visit purdue.edu/agbarometer.

Since the summer of 2019, Purdue researchers have been tracing producers’ perceptions regarding the ongoing trade dispute between the U.S. and China-specifically, whether they think the dispute will be resolved soon and the outcome will ultimately benefit U.S. agriculture.

In January and February of this year, 80 percent of survey respondents said they expected to see the trade dispute with China be resolved in a way that benefits U.S. agriculture. However, on the November survey, the percentage of farmers expecting a favorable outcome for U.S. agriculture declined to 50 percent, the lowest percentage recorded since the question was first included on a barometer survey.

In a related question, only 44 percent of respondents to the November survey said they think it’s likely that China will fulfill the Phase One Trade Agreement requirements, down from 59 percent a month earlier.

Read the full Ag Economy Barometer report at https://purdue.ag/agbarometer. The site also offers additional resources — such as past reports, charts and survey methodology — and a form to sign up for monthly barometer email updates and webinars.

Each month, the Purdue Center for Commercial Agriculture provides a short video analysis of the barometer results, available at https://purdue.ag/barometervideo, and for even more information, check out the Purdue Commercial AgCast podcast. It includes a detailed breakdown of each month’s barometer, in addition to a discussion of recent agriculture news that impacts farmers. Available now at https://purdue.ag/agcast.

The Ag Economy Barometer and two of its components — the Index of Current Conditions and the Index of Future Expectations — are reported on the Bloomberg Terminal under the following ticker symbols: AGECBARO, AGECCURC and AGECFTEX.