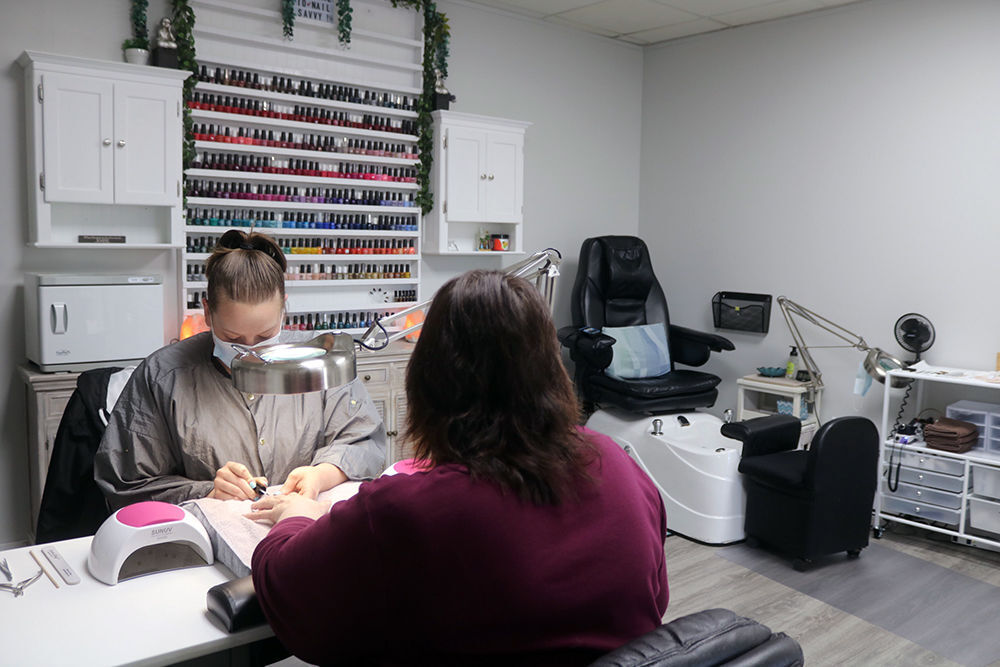 ROSELAWN, Ind. — Ron and Eva Gann are helping to bring out the beauty of customers, one appointment at a time, and they don’t appear to be slowing down anytime soon.

Ron and Eva, who are the owners of the Cutting Edge Salon and Spa, are not only celebrating the first anniversary of their business but they are also announcing the expansion of services. The salon and spa have become a place where customers can leave looking good from head to toe with that expansion.

“We are both very honored and humbled to own this business in our hometown and we are very thankful for all the wonderful clients who have helped make our first year successful,” Eva said.

The two are both lifetime residents of Roselawn, so owning a business in the DeMotte/Roselawn area felt right. The idea of the salon began in 2019 and the couple began looking for a building. They found one behind the strip mall on SR 10. The building housed a restaurant with a dining room and kitchen and a separate business in three sections. Their idea was to transform one of the sections into a beauty salon and lease the restaurant and dining area. The couple closed on the building in February of 2020 and the salon was to open in March of 2020 but the pandemic hit.

“We were sitting there with a brand new salon and couldn’t open it until May 11,” Ron said. “When we opened we had four stylists and an esthetician who had a lot of catching up to do. They were veteran stylists who were booked months in advance. For the first month or so they were working 50-60 hours each to try and get people caught up.”

While the stylists, Tammy Alexander, Paige Gann, Andrea Rae, and Gina Rendant, and esthetician, Caitlyn Lynch, were working hard to make everyone look their best post-COVID-19 restrictions, the restaurant that was being leased from Ron and Eva was not faring as well. The restaurant closed and Ron and Eva were tasked with deciding what they wanted to do with the kitchen and dining room.

“The entire time, we had in mind, that down the road we would like to expand so that we could do more with the salon such as tanning and nails,” Ron said. “When the building became available, we decided to take over the whole building.”

Ron explained that the dining room has been remodeled into tanning rooms and the kitchen area was remodeled for a manicurist, Allie Smith, owner of Nail Savvy. Four rooms now house a few different tanning options including red-light therapy, traditional tanning in a bed or standing, and automatic spray tanning.

As changes were happening rather quickly for Ron and Eva, Ron said they kept their faith that the Lord was leading them in the direction to expand. The business was blessed after the pandemic restrictions loosened in May 2020 and soon after the whirlwind of the expansion began in August of 2020 and continued to mid-April of this year.

“We did not plan on expanding that soon but we felt like since the doors were open in a way that we could accomplish it — it would be the best thing for everyone to pursue it,” Ron said.

Eva said the business continues to grow as regular clients return, some of whom have already used the tanning beds.

“There are a lot of people interested because it’s basically a one-stop-shop now,” Eva said. “You can get everything done here.”

Ron said because of the remodeling, the adding of the Nail Savvy, and being in business for a year, he and Eva want to celebrate. A drawing will be held and an informal open house will be held on May 22.

Cutting Edge Salon and Spa is located at 5935 E. 1015 N., DeMotte (Roselawn). For more information about the open house and services offered at the salon and spa visit their Facebook page.