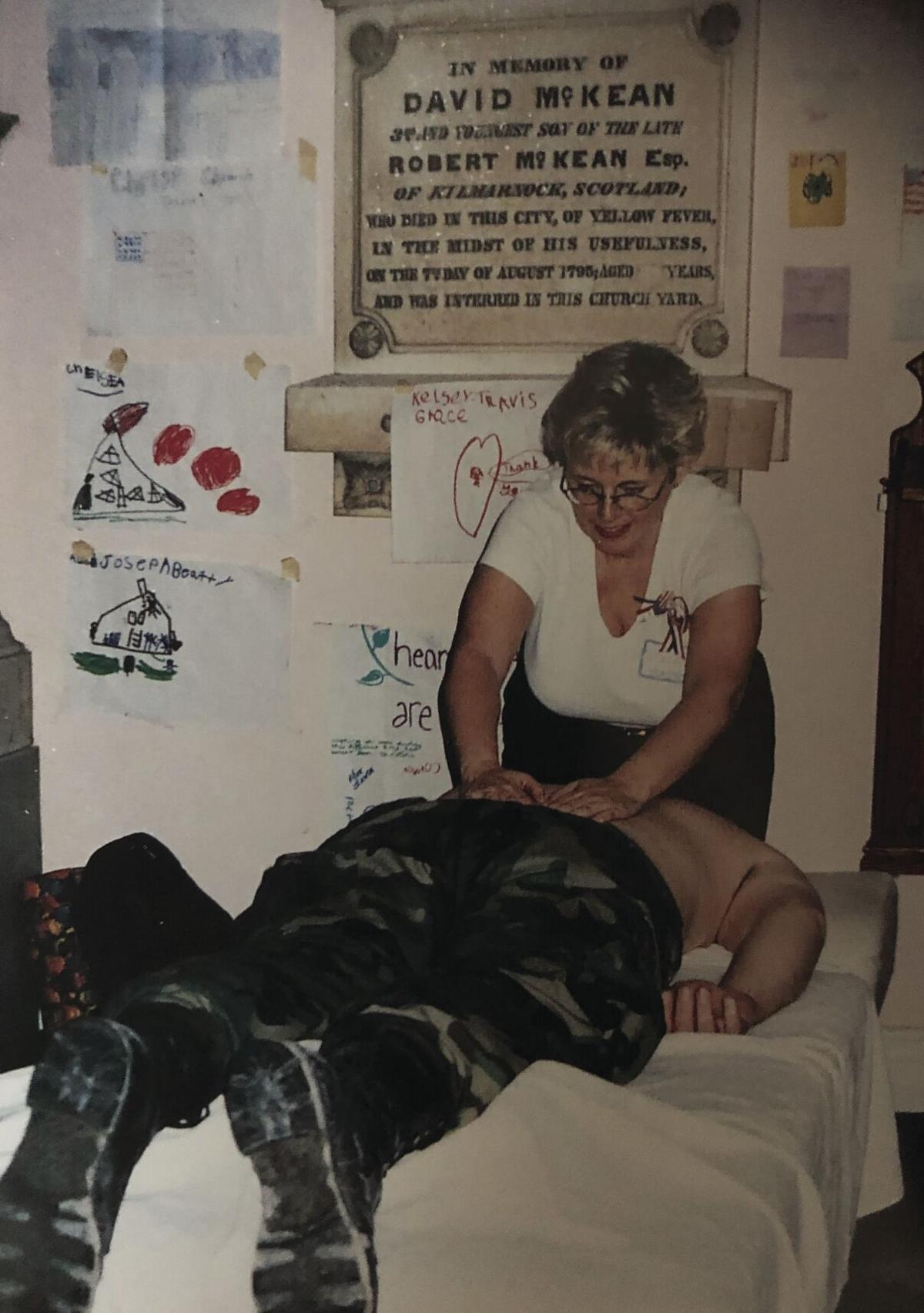 This image of Claudia Faust at work ran with the original Finger Lakes Times story. It is also featured in a book, "Light at Ground Zero: St. Paul's Chapel after 9/11." 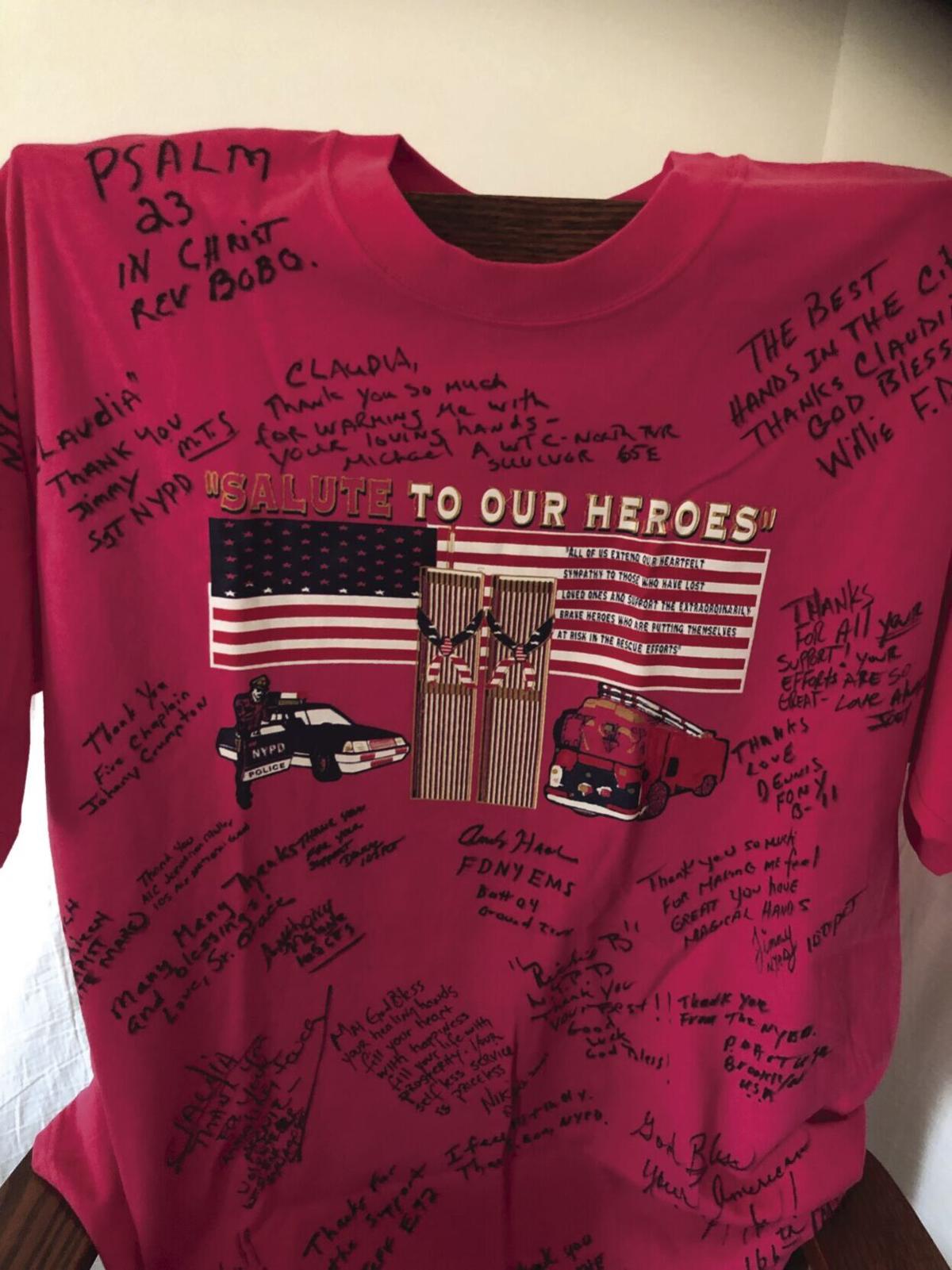 Grateful first responders left heartfelt messages of gratitude on T-shirts Claudia kept nearby. Today, they are part of her treasured collection she plans to share with her grandchildren on the occasion of the 20th anniversary of 9/11.

Editor’s Note: Claudia Faust, a New York State licensed massage therapist, reflected on her volunteer work with first responders in the aftermath of 9/11 on the occasion of the 20th anniversary of the attacks. She first talked to the Finger Lakes Times in 2002. This retrospective piece is packaged alongside the original story.

Claudia Faust is a survivor.

Twenty years ago, the Waterloo, New York, massage therapist beat the odds after a failed medical procedure put her in a seven-day coma.

At one point, the doctors told her husband, Stephen, that he needs to find a priest as Claudia was not expected to make it through the night.

It was mid March of 2001, and had things gone as forecast, that year would have been inscribed on Claudia’s headstone.

But fate had other plans.

A few days later, the licensed massage therapist woke up from the coma, and it was clear that against all odds, she was here to stay.

This dark ordeal -- and its unexpected positive outcome -- would have been just that in the Faust family lore, a story to tell the grandkids one day.

But at the time, Claudia’s return to health was powered by an epiphany she had experienced while still in the hospital: She believed she had been spared for a reason.

One presented itself on the world stage just a few months later.

On Sept. 11, 2001, as the horrified humanity watched the planes hit the Twin Towers, the 45-year-old mother of four found the answer to her compelling search for purpose after returning to life.

That is when and how Claudia’s life intersected with a defining and tragic moment in history.

Her story, still raw after two decades of reflection and reliving it on every anniversary since, is hers to tell, but it is also illustrative of the decisions made by many everyday Americans, who, like her, volunteered their efforts in the aftermath of the tragedy.

On the first anniversary of 9/11, she gave a brief interview to the Finger Lakes Times, but today, she has the benefit of hindsight and perspective to add depth to what she witnessed and lived through, so she finds comfort and healing in sharing her story. (The original story is republished here as a sidebar.)

How Claudia reacted to 9/11

That fateful morning, Claudia was busy shooting a TV commercial for her massage therapy business, so after she finished with the videographer and her patient, her husband told her to sit down.

She didn’t have to, as the footage that was unfolding on the den tv set behind him had already riveted her eyes.

“We sat in horror, it was unbelievable, people use that word lightly, but it was just unbelievable,” she said.

In a frenzy, first she tried to call her sister, Lydia, then a special ed teacher in Nassau County, then her parents, who lived in Merrick, to no avail.

But in that panicked state imposed on the psyche by a sense of despair and helplessness, one thought kept recurring.

As she recalls the ordeal today, her voice is as firm as her decision was at the time.

“There was no talking you out of going there,” her husband told her then. “Just be careful, be safe.”

On Sept. 12, Claudia got in touch with the Swedish Institute of Massage, which is headquartered in New York City, and wanted to know how she could put her skills to good use.

She was so determined to lend a helping hand in some capacity that she did not wait for a call back. Instead, she hopped in her Volkswagen and headed to Long Island where her parents lived.

On her way there, the institute coordinator called her and asked her if she wanted to work on the U.S. Navy Ship Comfort, which had 1,000 beds and 12 operating rooms.

That Saturday, she reported to Pier 92, on the west side of Manhattan where the ship had docked. At the time, the ship’s mission was to help first responders and Claudia was among a small army of volunteers who assisted as asked.

“It was the most emotional time in my life,” she said. “They were big, burly FBI agents, all loaded up with guns, but as soon as I sat down for a minute and put my arm around them, they cried. They were physically and emotionally exhausted.”

For five days, Claudia worked as her adrenaline-pumped body would allow, and what kept her going was the condition of the first responders.

“They were wiped out, fatigued and they needed a break, and an escape for 30 minutes, they would get new boots, new clothes, eat something, get a massage and then head back to Ground Zero,” she said. “It was a non-stop flurry.”

One of the first patients she treated on her first day there was a 21-year-old Marine whose right hand had clenched the gun he had been holding for 12 hours while on patrol so tight that he could not let go of it.

“After 20 minutes, he was able to release the gun, and release some tears, he cried and I cried,” she said.

Claudia returned home after a week to pick up her regular job, as the rent still needed paying and so did the car loan, but after two and a half weeks, she went back to New York.

This time, she went straight to St. Paul’s Chapel, the church next to the fallen towers, which had survived miraculously, untouched by the cataclysmic inferno that had unfolded less than a 100 yards away from its doorstep.

Fellow volunteers there gave out cigars to allow first responders to get away, albeit momentarily, from the pervasiveness of the stench of what Claudia described as “burned rubber.”

That image, along with the smell, is seared in her mind to this day.

Claudia says she vividly remembers working on the feet of first responders.

It was not uncommon for her calming voice and her therapeutic skills to put a worn out first responder to sleep.

“ After 25 minutes, I would have to wake them up from the power nap because somebody else needed the table,” she said.Her patients reciprocated with heartfelt messages.

“You have the hands of an Angel, thank you,” NYPD’s Gail D. wrote on one of the T-shirts Claudia kept nearby.

Another recipient of her gift thanked her, adding:

“Volunteers are the best.”

Still another lauded her efforts thusly:

For months following the attack, Claudia would go back to St. Paul’s for a week at a time.

Around May of 2002, after the chapel closed as a relief center, she followed the crews to the landfill of Staten Island, where truckloads of debris from Ground Zero were hauled.

“By that time, things were returning to sort of normal, but I needed some closure, so I worked there as well,” she said. “I brought my massage table with me and I helped with sifting, they gave me gloves and all, and I kept sifting.”

To this day, she does not have to look up how many firefighters were lost that day--the number is etched in the plaque of her memory -- 343.

“The firemen had lost their brothers, it was heartbreaking,” she said. “I have a special place in my heart for the fire department and NYPD-- they have always went above and beyond, oh, my gosh.”

Thrusting herself as a volunteer in the thick of it, like many fellow Americans, Claudia was humbled by the humanity extended to her by strangers.

The conductor on the Long Island Rail Road would let her ride for free after he found out that she was volunteering at the relief centers.

Her husband, who at the time was the Dean of Students of the New York Chiropractic College, understood her passion.

“He was very supportive, that was good enough for me,” she said.

As the 20th anniversary of 9/11 approaches, like the rest of the country, Claudia is taking stock of what happened that day and her own response.

Some of the memories she made as a result are contained in two bins she keeps in her bedroom closet.

She goes through it at every anniversary.

“I will never forget,” she said. “It puts things in perspective.”

Among the artefacts she has collected are t-shirts, pins, hats, a medallion given to her by the commander of the Navy ship, and other items she treasures.

This year, she will pull out the bins and arrange their contents in her living room where an 8-by-10 framed picture of the Twin Towers in their full glory has been hanging since the attacks.

In the past, she would look at the items herself and call people she met at the relief centers so that they could reconnect and reminisce together.

But this year, in addition to her annual rituals, she will do something very personal.

She will show the display to her 7-year-old granddaughter, Jennifer.

“She has never seen that stuff, but she knows that grandma did something,” she said.

Jennifer’s second oldest brother. Michael,19, will also get a firsthand look at a family story that captures the time when his grandmother gave what she could when her country needed her.

“They have to know what happened and how great the police and the firemen reacted to that, now the world is different. I will tell them that it was scary, the scariest thing I ever lived through, emotional, and yet there was so many good things that came out.

“I will tell them there’s a lot of good people who can pull through when times are tough, they have to learn this, this is part of history.

“New Yorkers stepped up to the plate big time and helped out. I have been back only once, maybe I can do it again this year. It was my honor to help. It was such a privilege to be there to help, it really was."