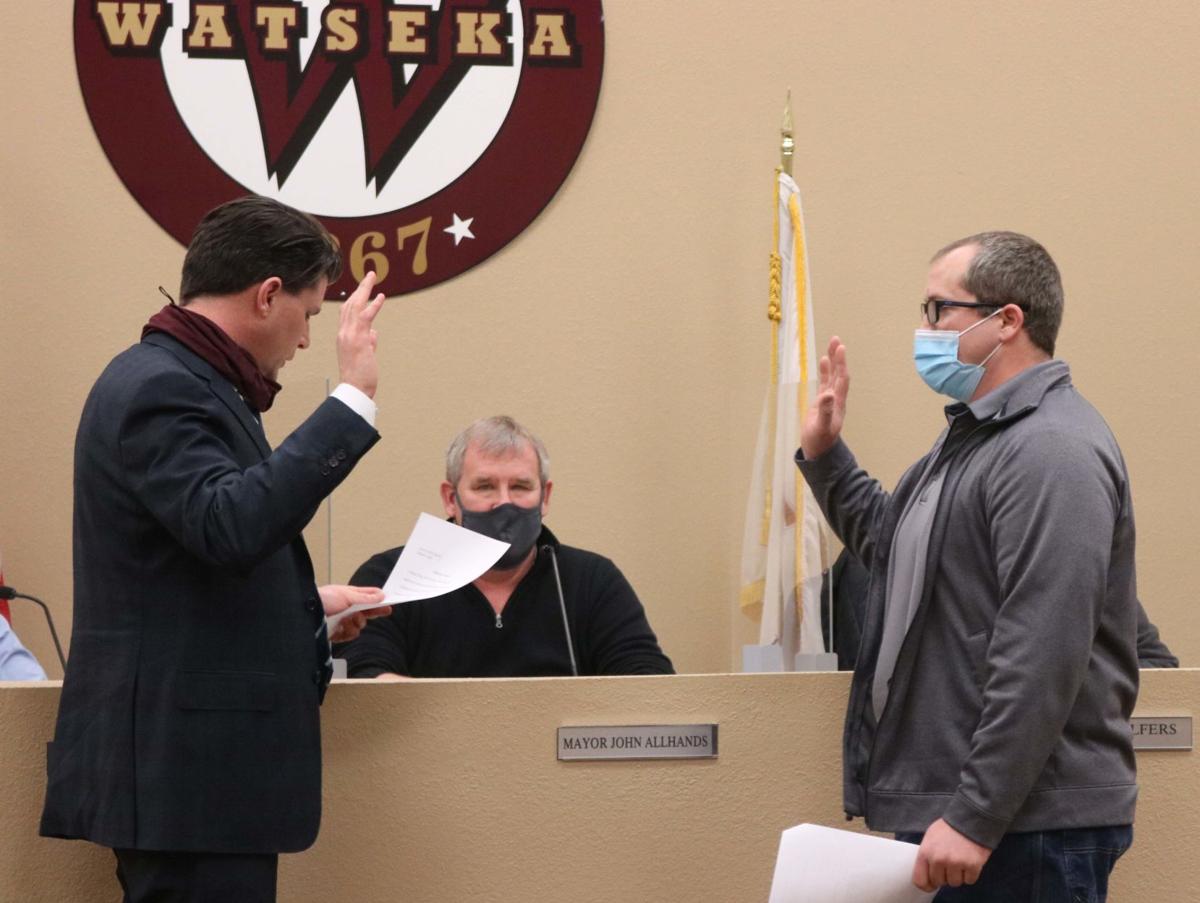 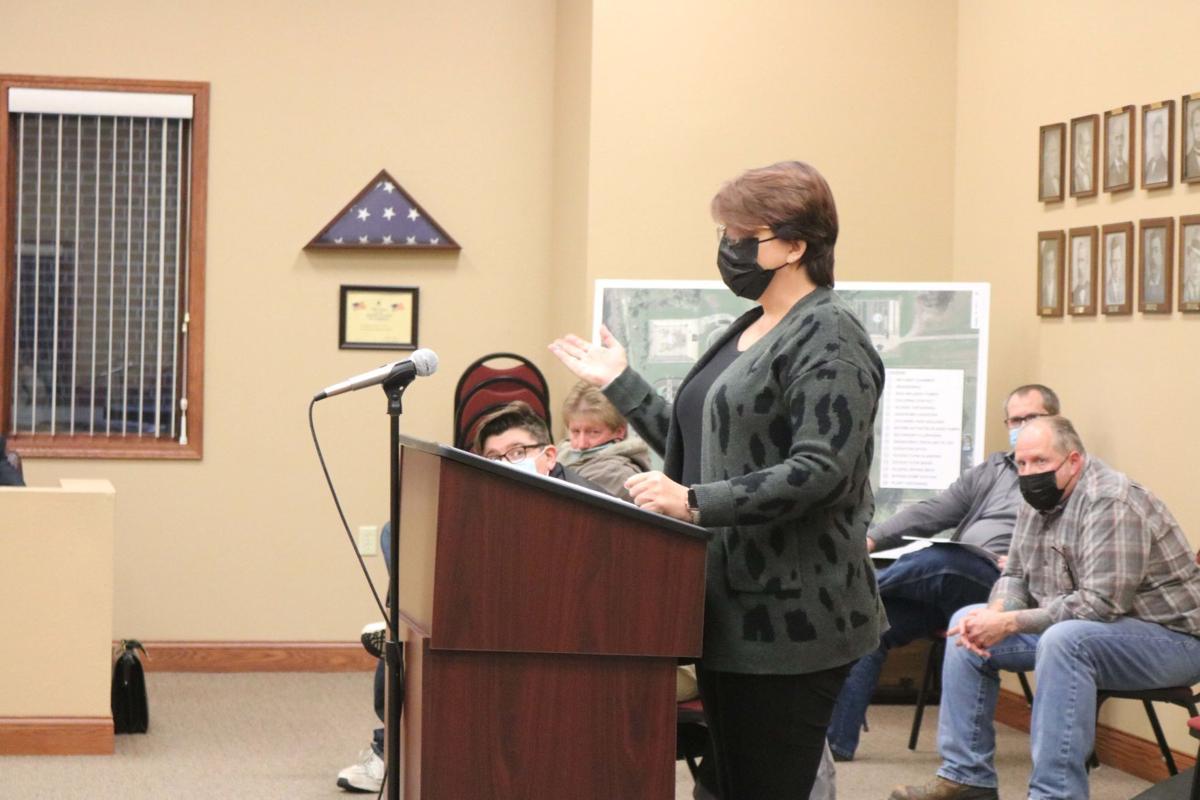 Jenny Musk, an April 6 candidate for Third Ward alderman in Watseka, questions why an appointment to the vacant seat is being done six weeks before the election.

Jenny Musk, an April 6 candidate for Third Ward alderman in Watseka, questions why an appointment to the vacant seat is being done six weeks before the election.

The seating of a new alderman in Watseka brought about some discussion and questions Tuesday night.

Dave Mayotte had been a Third Ward aldermen, but had to resign recently because he moved out of the ward.

Mayotte was up for re-election this year and had filed to run April 6. His name will appear on the ballot because of the timing of when the ballot was printed and when he resigned. Mayotte had a challenger, Jenny Musk, who is also listed on the ballot.

At Tuesday’s meeting Mayor John Allhands appointed Michael Yates to Mayotte’s seat, who Allhands said came to him expressing interest in the seat.

“It was brought to my attention that it is the mayor’s intention to appoint Michael Yates to the vacant alderman’s position in the Third Ward this evening,” she said.

“What I wonder is, why was this so urgent? The election is six weeks away. Other seats have remained vacant for longer periods of time. There’s no imminent need for that seat to be filled. I have come faithfully to all of the city council meetings and the committee meetings for the last six months. I am familiar with the current issues that are being dealt with by the council and I have sought out the necessary signatures for my petition. I have done the leg work because I want that position. I want to sit with you.

“It’s not to be a concern. It’s not an ego trip. I fully am passionate about helping my community. Yet the mayor appears to have opposition to me being in the role. What I want to know is why? Rhetorical. I know you can’t answer questions. He has known I have put my name on the ballot yet he did not seek me out to ask would you like this role? Would you like to be appointed before the election? And it’s nothing against Mr. Yates. I have been friends with Mr. Yates and his wife for years. Been cordial. It truly has nothing to do with that. He’s just choosing to appoint someone a mere six weeks before the election.

“I want you to think what is in the best interest for the city and the residents. To make up your own minds. I know you do. If you intend to vote on this appointment for Mr. Yates this evening may I remind you of your own city code. 1-6-3 Powers, duties and responsibilities, B, appointment of officers, filled vacancies, 2.”

“That’s your own ordinance code 2248 dated 11-13-2007. Thank you for your consideration. I just want what is in the best interest of the city and the residents. Thank you,” Musk said.

When it came time on the agenda to address the appointment, Allhands said, “We have a vacancy on the council with Dave Mayotte’s resignation due to moving from the ward,” he said. “Tonight, I would like to appoint Michael Yates to the vacated seat for the remainder of the term.

“Michael was approached by a mutual acquaintance of a council member and he took the initiative and contacted that council member and expressed an interest in serving. After talking to him I think he brings a lot of new and viable perspectives to the council.

“Presently, he serves as the safety official for T and D Metal. He has experience with implementing budgets and working with state regulatory agencies. Michael also served as a full-time Watseka Police officer for four years after serving as a part-time patrolman and auxiliary member prior to that.

“In talking to Michael I found out that he has two active children in the Watseka School District. This gives the council another unique yet important perspective that the rest of don’t have because all of our children are grown with the exception of Brandon (Alderman Barragree) who has a senior. With his kids at a different stage in life than our kids he may bring a different approach that ewe may not have thought of,” Allhands said.

Allhands asked city attorney Joe Cainkar for counsel on making the appointment. “I’d like to make the appointment so where do I need to go from here?”

“You make the appointment, he gives you the name and then it’s with the advice and consent of the council,” he said. “I know she referenced an ordinance. First of all the way this works. You have 60 days after a vacancy to fill it. After you get a name, the city council has 30 days to consider that. They don’t have to vote tonight but they have to do it within 30 days. That’s by state statute. If it’s not acted upon then you give another name. If it’s denied or not acted upon you give another name and that person is the alderman. Advice or consent doesn’t matter. The ordinance at issue, I’ve never seen one like that before. You guys have it. I don’t think it’s a valid ordinance because it affects the mayoral appointment powers. That’s a change of government so to speak but if at the same time if you wanted to honor it, it’s 14 days. You could get a special meeting in 14 days. Those are my two cents.”

BOB AT THE MOVIES: 'The Unholy' filled with cheap scares and 'hole-y' story

Cainkar said Allhands made the appointment and the council has to act on it.

Alderman Dennis Cahoe made the motion to accept the appointment and Alderwoman Monna Ulfers seconded it. The vote passed 5-2, with Alderman Darrin Rushbrook and Alderman Mark Garfield voting no.

Musk then asked, “Doesn’t the ordinance say it has to be unanimous? You’re not following your ordinance if you don’t.”

Allhands said, “At this point, you had your time at public comment.”

Cainkar said, “The ordinance says if you have unanimous consent before final action is taken. Logically, you cannot determine if there’s going to be unanimous consent unless final action is taken, so it’s written poorly. The mayoral appointment is affixed by statute. There’s a method that is done, it’s advice and consent. You guys can wait 30 days. You can do it on the day of, whatever. When you start putting in supermajority voting restrictions on stuff that does not have those in statute, you get into a situation where you are changing the form of government, which requires a referendum. So it’s my opinion is that the ordinance is bad. I’m not going to tell you not to do it. You guys make your own decision.”

Allhands then had Cainkar give Yates the oath of office.

Rushbrook said, “I’d like to go on the record to say I don’t agree with what you just did. We purposely violated a city ordinance. Whether we like the ordinance doesn’t matter. There’s an ordinance written.”

Allhands said, “We had legal counsel.”

“Legal counsel can’t tell you to violate an ordinance,” Rushbrook said. “He can advise about what you should do. There is an ordinance there that we just now violated, or you did, one or the other.”

“The ordinance states what you do afterwards. There wasn’t a unanimous vote,” Rushbrook said. “The ordinance is specific if there’s not.”

After the meeting, Allhands sent this statement via email, “The procedure for the appointment of an individual to fill a vacancy in the office of alderman is governed by State statute. The appointment of Michael Yates complied with that statute in all respects.”