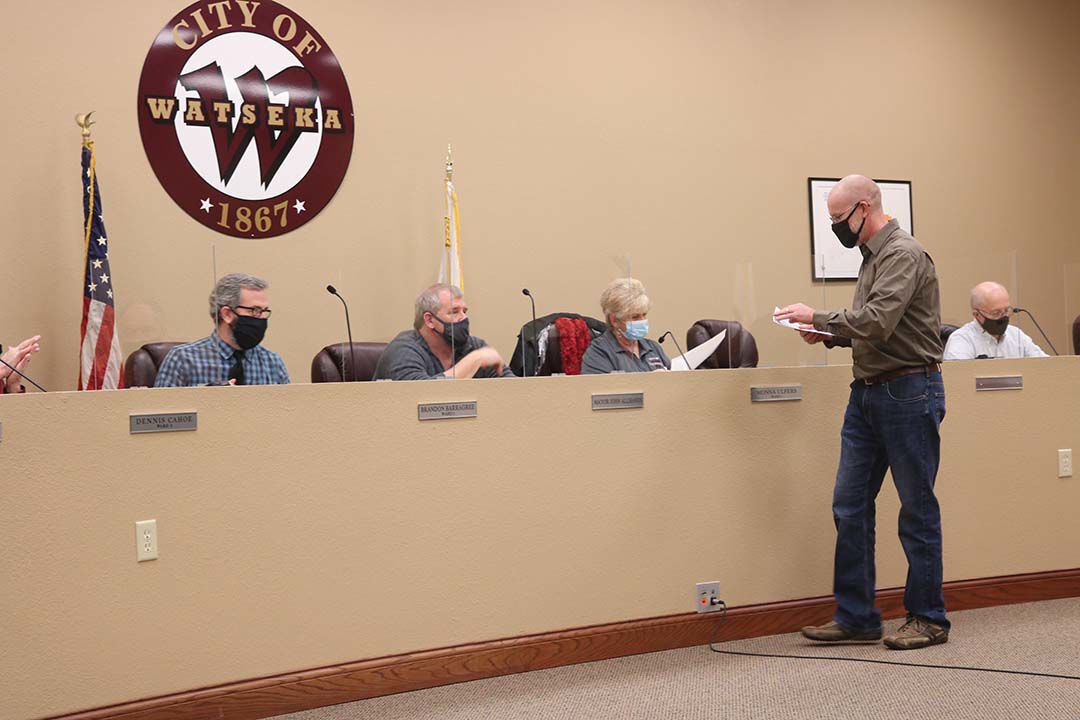 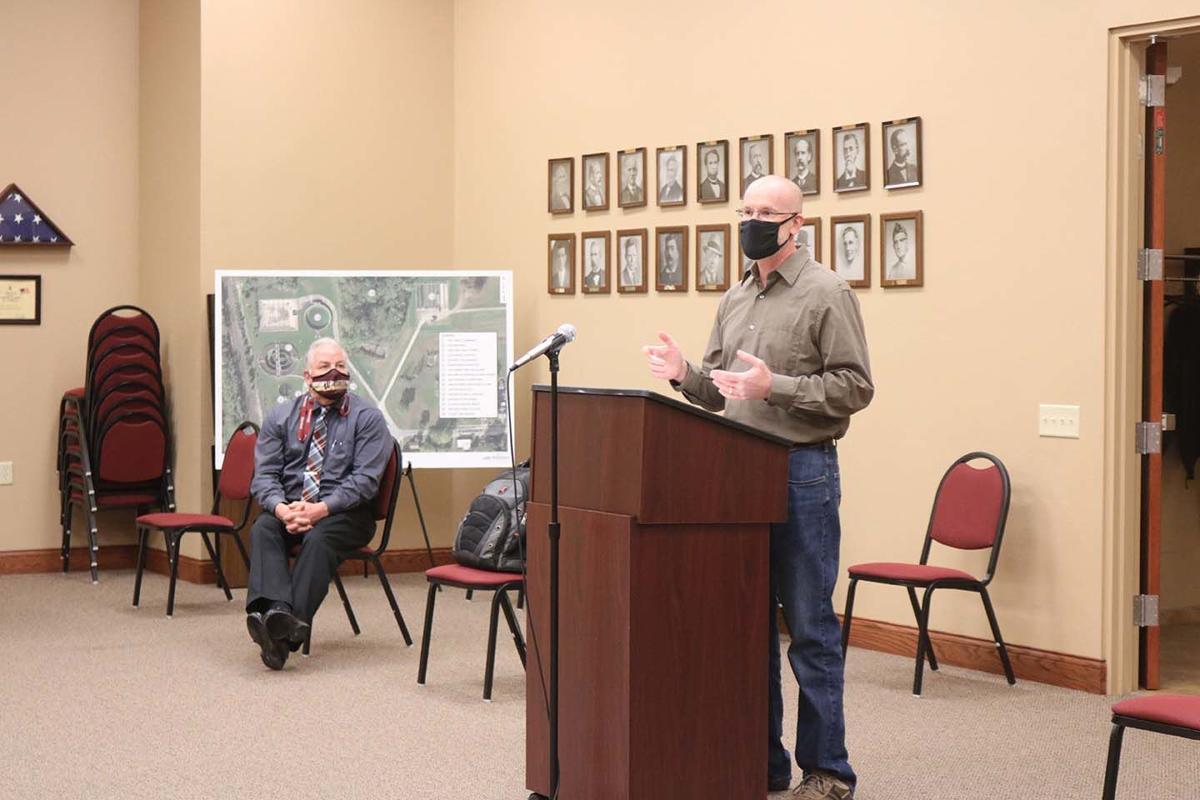 Unit 9 Superintendent Dr. David Andriano and board member Rusty Maulding make a presentation for the Unity for Our Community referendum.

Unit 9 Superintendent Dr. David Andriano and board member Rusty Maulding make a presentation for the Unity for Our Community referendum.

Watseka aldermen heard a presentation about Unity for Our Community from Unit 9 representatives Tuesday night.

Superintendent Dr. David Andriano and board member Rusty Maulding made the presentation about the referendum question that will be on the April 6 ballot and what it means for the district and students.

Maulding told the aldermen that it is partly because of the city’s efforts with the hazardous mitigation plan. “That’s really allowed us to move forward,” he said.

He said the district’s current efforts first started about three years ago when the board approached Robert Zummallen about putting together a 10-year capital improvement plan. “We have aging infrastructure and we needed to get a handle on what that would cost down the road,” he said. “After about a year of being in that plan, it became very clear that with cash flow it just wasn’t going to work. We turned it into a 20-year plan. We were still able to address what we needed to address but we also have been kicking the can down the road a little bit but making it work.

“We also have declining enrollment. We’re losing approximately 50 students a year for the last four years. So our total enrollment has gone from over 1,000 to now just above 900 in the last couple of years,” he said.

Maulding said the district has has a desire to created a “beacon for our community” and to reinvest in the community. “It shows we are not going away and we are investing in the future,” he said.

In the pre-design process, the district engaged Reifsteck Reid Architects and DLR Group. The architects toured the existing facilities and interviewed staff to determine needs. An internal and external stakeholders committee was formed to provided feedback and direction. In that time there were 11 building restructuring ideas presented, he said, with the committee quickly moving toward a campus concept, K-12 on the same site.

“One of the things we’ve been trying to look at was what would are future space needs of our school. For years we’ve been open to consolidation opportunities. We didn’t want to completely close the door on that. We also understand we have declining enrollment and so we didn’t want to overbuild. We tried to get it just right,” he said.

The architects have put together some schematic plans, showing square footage that would be needed for different aspects of the plan. The cost estimates were then put together. The total project is about $67 million.

The board has worked on external funding opportunities, which includes state and federal grants being applied for.

The final recommendation is to create a K-12 campus school, which would heavily renovate the existing high school building and build a new, connected building to the east of the high school gym. Glenn Raymond School would be decommissioned and razed. Wanda Kendall School would be lightly renovated and would house the district office. The district office building would be no longer used other than the bus barn area. Nettie Davis School will not be used after this school year and will be razed also.

Even if the referendum goes through, Maulding said it would be four or five years before GRS is decommissioned as the project moves forward. The district is working with the regional superintendent’s office about what it would have to do to meet health, life, safety requirements during that time. “If you know that you are not going to have usage of a building, the way you maintain it will change,” he said. “You approach the problem differently.”

With the decommissioning of Nettie Davis, he said, the district will be downsizing the number of sections from four to three sections and will fit them in to the other buildings regardless of what happens with the referendum. The building has flooded several times in the past few years.

There are several repairs, including $250,000 in repairs that need to be done on the district building, he said, so discontinuing use of that building will also be beneficial.

“We feel like that’s a fairly reasonable ask. We are essentially getting a $67 million building for between $40 and $100 a year for the majority of homeowners.

“Grants will make up the majority of this project,” he said. The district has passed the first stage of two grants submitted to FEMA. “So far things look very encouraging,” he said. There are still some State of Illinois grants that could come available, but that money is at a standstill at the state level at present.

If the referendum doesn’t pass, Maulding said, “The hard truth is we still have $17 million in deferred maintenance. The board could try to go back to the ballot again a year from now, but the costs could increase as much as $3 million in that year’s time. Also in that time, Maulding said, critical systems on the aging buildings could fail. Bonding costs could also increase in that time. If the board opts to not try for another referendum, the district would have to prioritize the health, life, safety repairs and issue health, life, safety bonds of about $8.5 million for the next 10 years and/or possibly issue working cash bonds.

Maulding said the district has addressed some infrastructure issues in the plan. Rain runoff will be collected on site, he said, with state law being followed with FEMA overbite and a civil engineer checking on things. There could also be a need for possible access improvements, he said, including road extensions. At present it is not known if the project will include those improvements or if the city would be asked to help with such issues.

Maulding said two other key features include a competition sized gym, large enough to be divided so two PE sections can run simultaneously on two sides, seating for events, a dedicated performance arts space that is highly customizable that could also open to the gym.

Mauliding said the architects and builders representatives have gone through the old building and feel confident that it can be renovated as the district wants. “We know there are maintenance things that have to happen,” he said.

Mayor John Allhands said when new families move to town one of the first questions is how the school system is. “I see a lot of potential with this project,” he said.