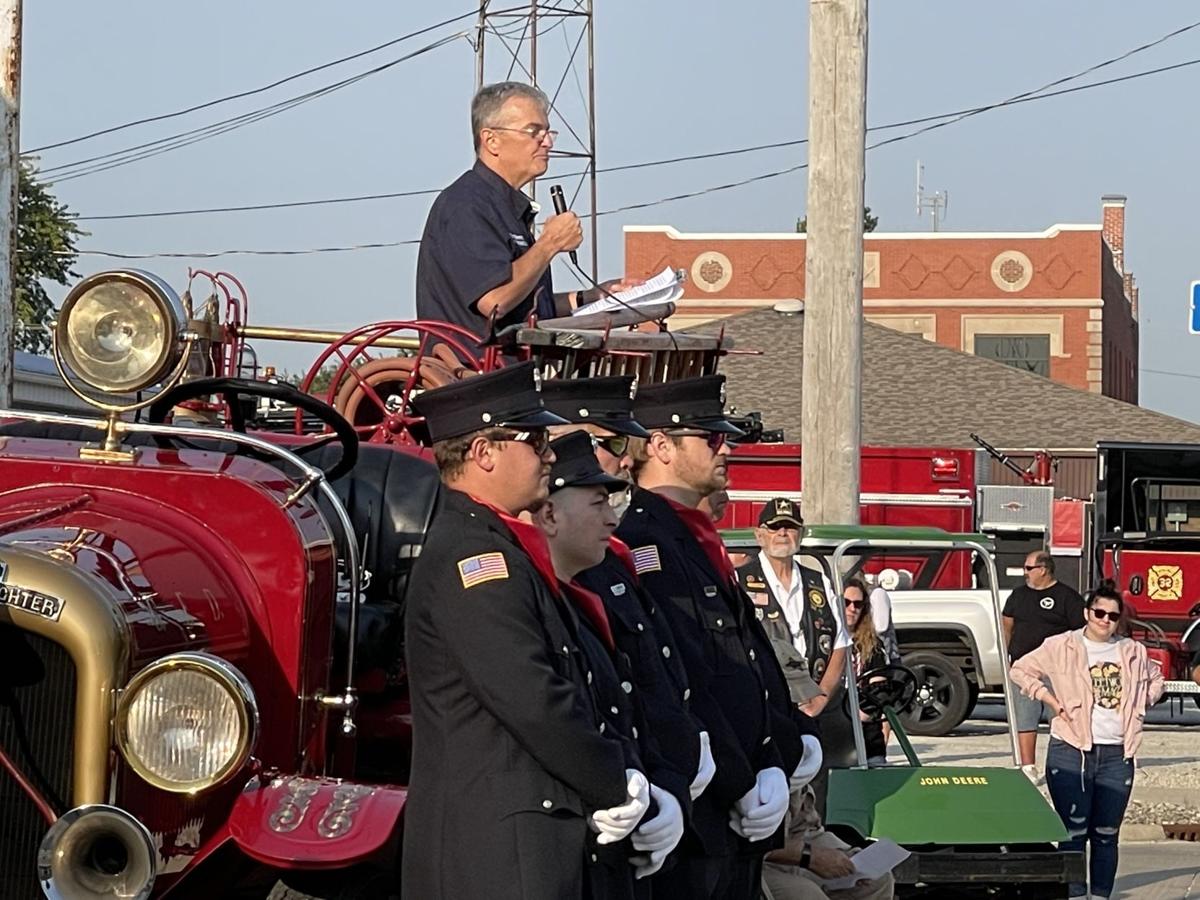 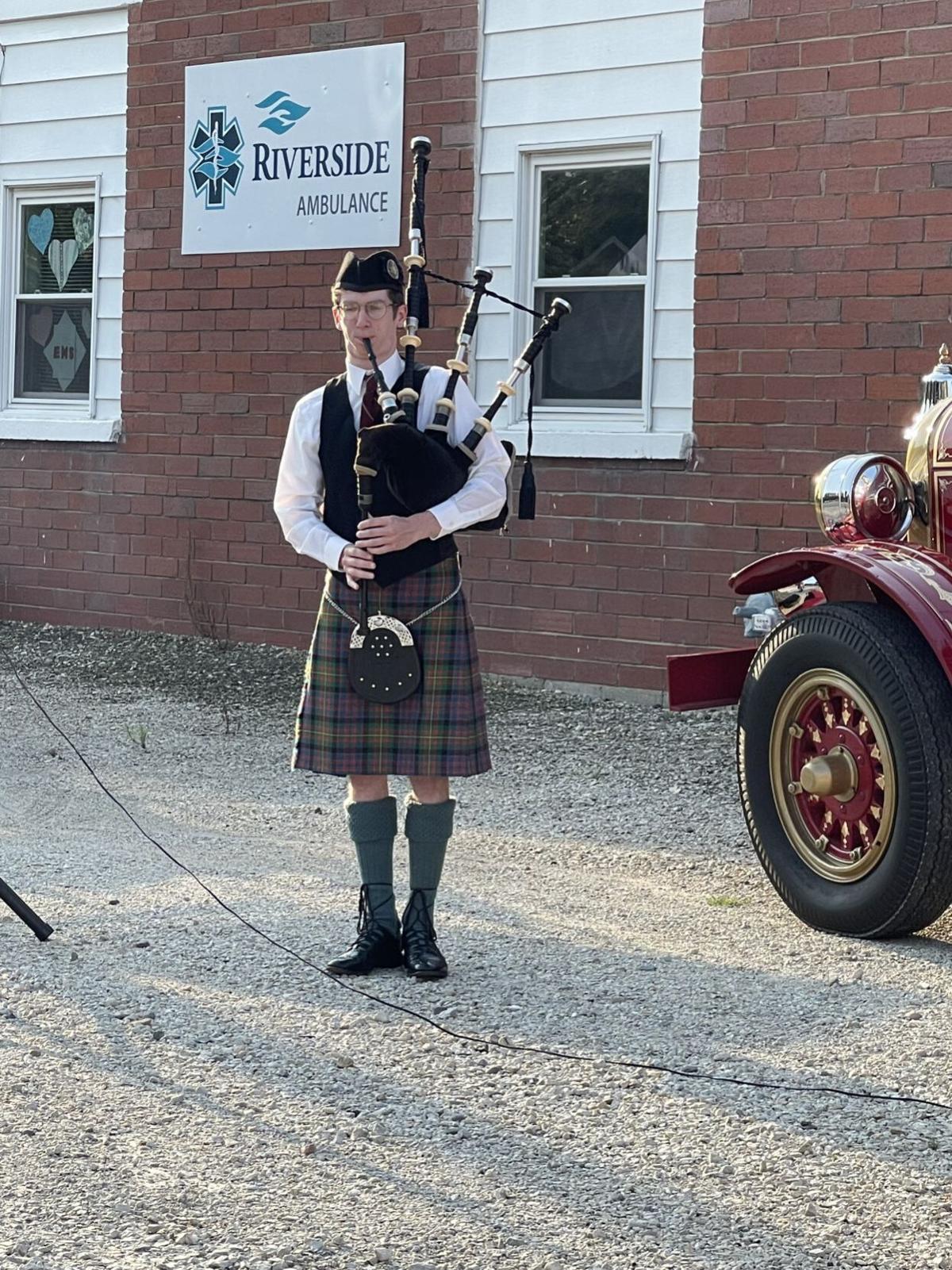 Kolya Sier plays the bagpipes during the Gilman ceremony. 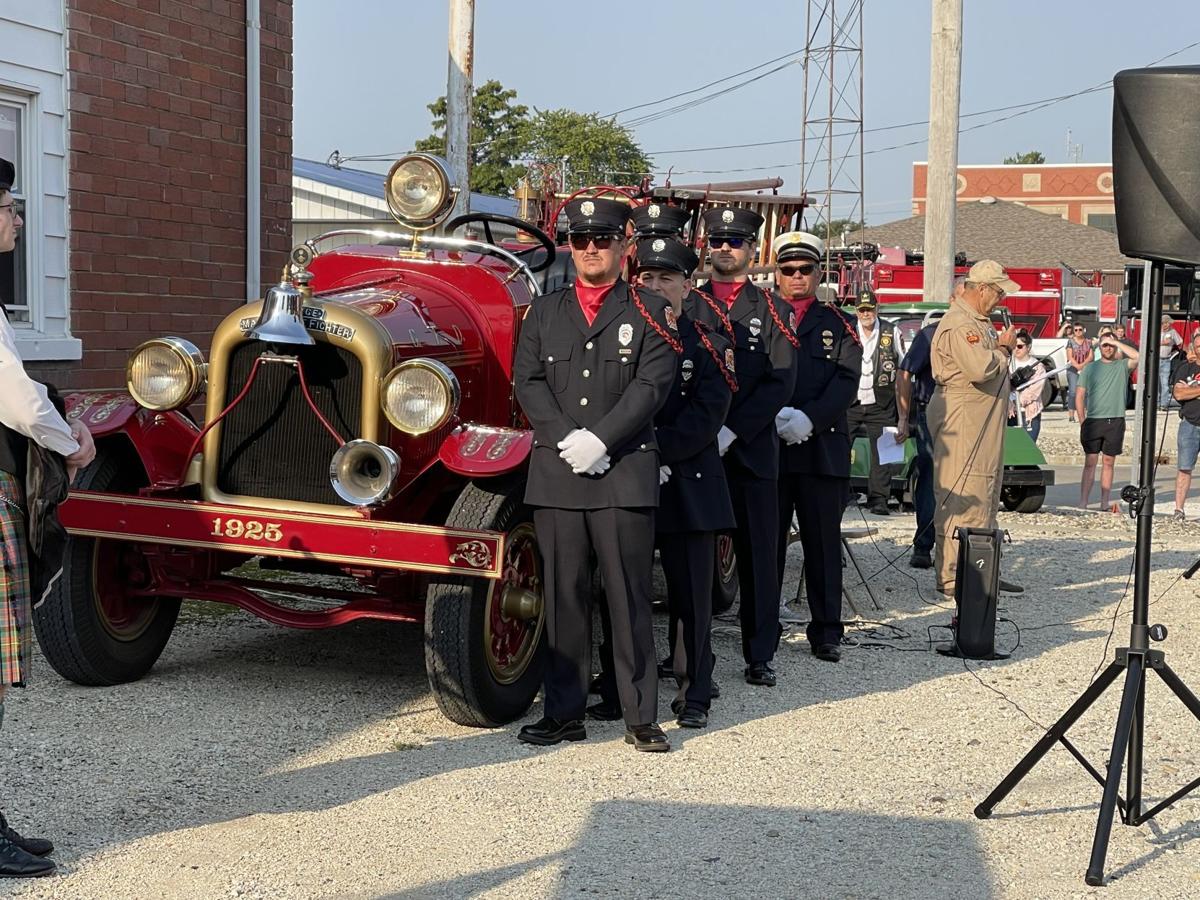 Kolya Sier plays the bagpipes during the Gilman ceremony.

The opening ceremony for Gilman’s Super Saturday also was a Sept. 11 remembrance event.

One of the highlights was a flyover from a World War II B25 bomber.

“The aircraft will be coming from the east and going to the west,” said Chuck Bohlmann, one of the organizers of the event. “It will be flying right over Highway 24. It will happen very fast. It will only be visible for about 30 seconds, maybe 20 seconds. The important point is it’s an honor for those folks who have gone west, who have given their all, whether they are EMS, law enforcement or military.”

Fire Chief Larry Walsh honored all the first responders in the county, listing each department. Many of those departments were present at the event.

“Also a big thank you to Watseka and Milford departments for bringing their aerial trucks and hanging the flag out here on the east side of the road,” he said, referring to the large American flag displayed between the two trucks.

“We are here today to mark the 20th anniversary of one of the darkest days in American history,” he said. “But we are also here to celebrate and honor those who have served on the front lines of freedom protecting our nation. Twenty years later they are still far away, keeping the rest of us safe, and we are deeply grateful to them and to their loved ones.

“Sept 11, 2001, started off like any other Tuesday. It was a beautiful late summer day. Warm and sunny. Just as the day was beginning the first news started coming in. Word of a terrible accident in New York City. Somehow a plane had flown over the city and crashed into its tallest skyscraper,” he said.

BOB AT THE MOVIES: 'Shang-Chi' is above-average film that deserves success

“We remember the fear and anxiety for a loved one who wasn’t answering the phone quickly enough,” he said. “The helplessness of watching our mightiest building and our military headquarters struck down. The anger for our faceless enemy who would dare strike our great nation in such a cowardly way. Remember the heroes — the firefighters, the police officers who walked toward the burning towers. As they walked they knew what was happening but they were going anyway. They walked up those stairs anyway, because of the need. The men and women who held the hand of a co-worker as they helped each other through the smoke and fire toward safety. And remember those who fought back. Those who stormed down the aisle of the hijacked airliner in Pennsylvania who saved the lives of many on the ground.

“American history is filled with stories of citizen soldiers who stepped up when the country needed them. We think of all our military over the years, our law enforcement, the first responders, all those who are there that when something happens they rush to the accident, they run to the situation, they don’t run the other direction.

“One the night of the attacks, President Bush said this ‘None of us will fever forget this day yet we go toward to defend freedom and all that is good and just in the world’. For two and a half centuries now America has been that beacon of freedom, the defender of that which is good and just in our world. It is in the most difficult moments that the true greatness of our nation is rebuild. As President Bush said that night, ‘Today our nation saw evil, the very worst of human nature and we responded with the very best of America’. With the daring of our rescue workers, with the caring restraint of our neighbors who came to give blood and help in any way they could.

“On Sept. 12 the American Red Cross was overwhelmed with blood donors. First responders, iron workers, and others with specialized skills that came from points all over America to get to New York and Arlington.” He noted that air traffic was still shut down at that time and that those who were there to help had driven many times straight through to get to New York.

“And they went right to work,” Bennett said. “We gained a whole new appreciation for our firefighters, our paramedics, our police officers. And many of us thought that a hero was someone was on a movie screen or football field, but we learned a whole lot more. Sept. 11 helped us remember that the true heroes are on the road in a patrol car or around the corner in a fire house. That night people gathered in town squares, parks, churches, gyms and on the steps of the Capitol, joining hands and singing ‘God Bless America’, putting aside their differences and and staying together as Americans. I repeat as Americans. Not Democrat. Not Republicans. Not Black. Not white. But as one group; as Americans.”

He said while it’s difficult to see sometimes “there is much more that unites us than divides us. And the anniversary of that day gives us a chance to honor all those who lost their lives, not to forget but to also remember that 9/11 brought out the best of America and how we came together as a nation to support, to encourage, uplift each other and be touched as Abraham Lincoln said ‘by the better angels of our nation’. That, my friends, might be the best way we can honor those we lost 20 years ago and may God continue to bless the United States of America.”

Also honored during the ceremony was World War II veteran Max Howard, 98, from Gilman, who served in the U.S. Navy in the South Pacific. He was a radioman/gunner on an SBD Dauntless dive bomber.

The Gilman department also has an honor guard that was present at the event, consisting of Roger Rietz, Jordan Schroeder, Andy Johnson, Jose Barrige and Brandon Fancher. Kolya Sier played the bagpipes.