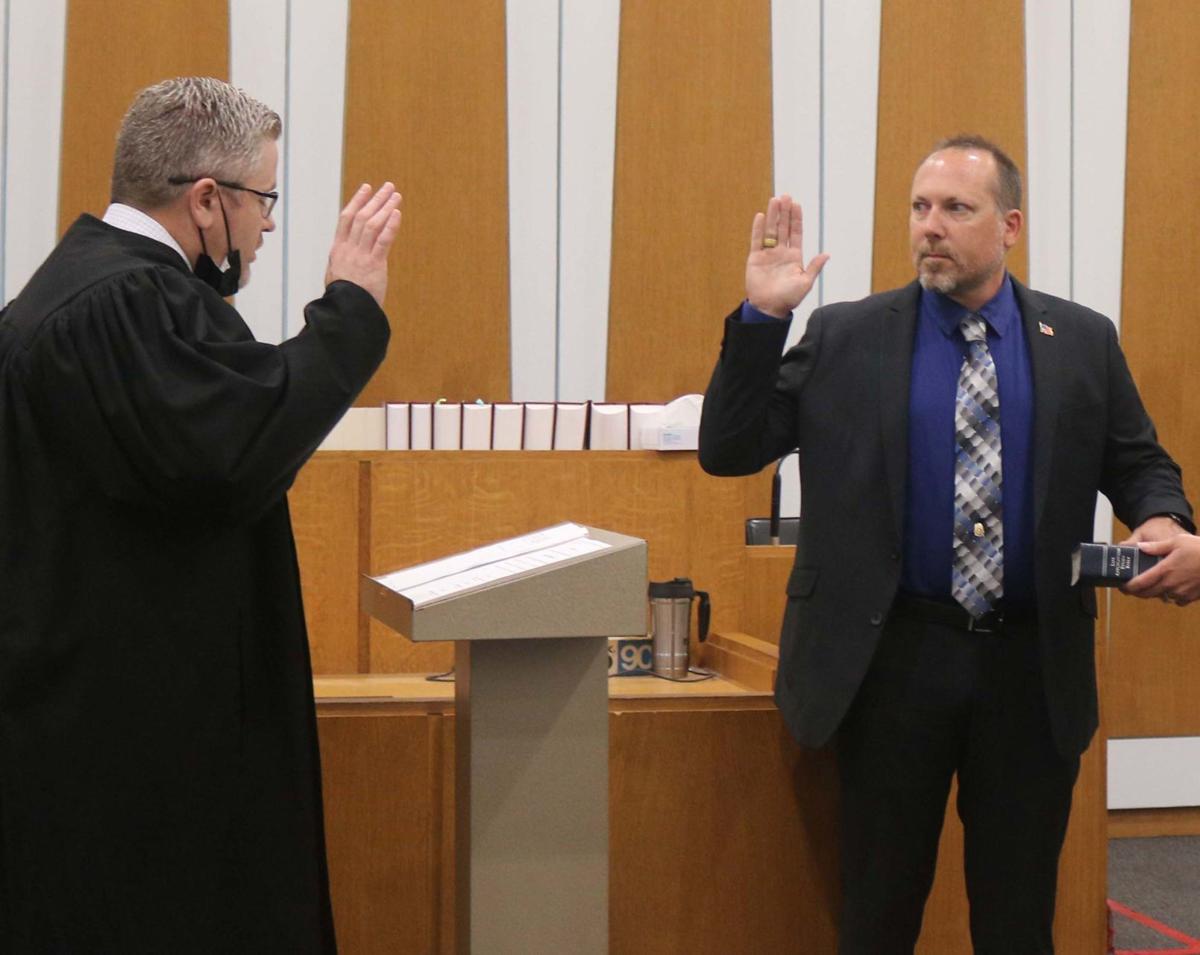 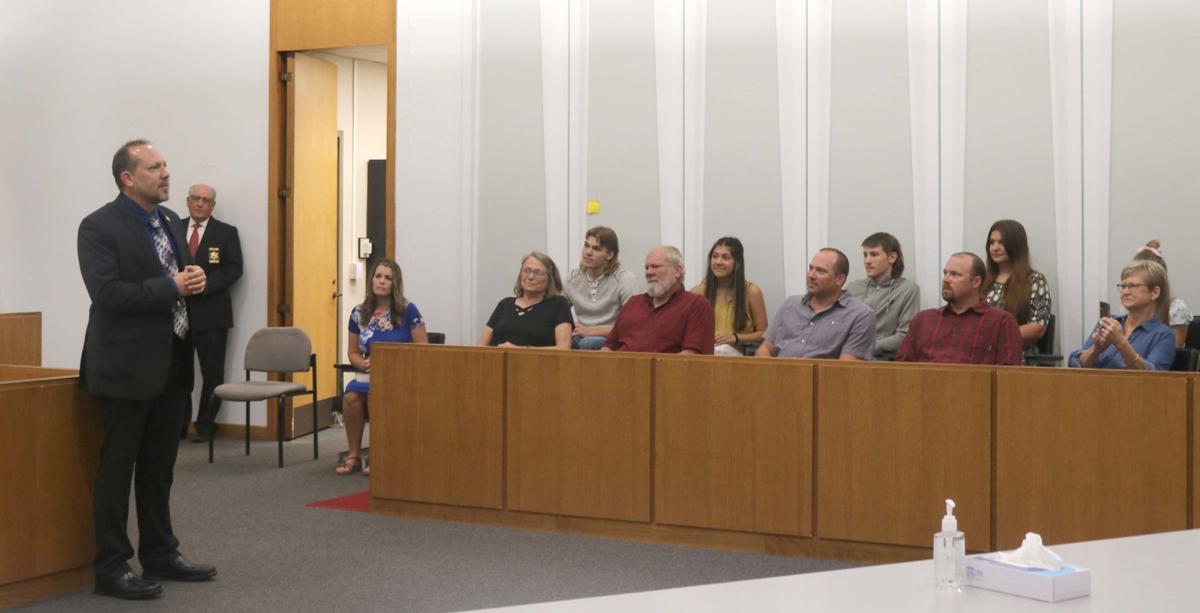 Iroquois County Sheriff Clint Perzee addresses the audience Oct. 1 after he was sworn in as sheriff. 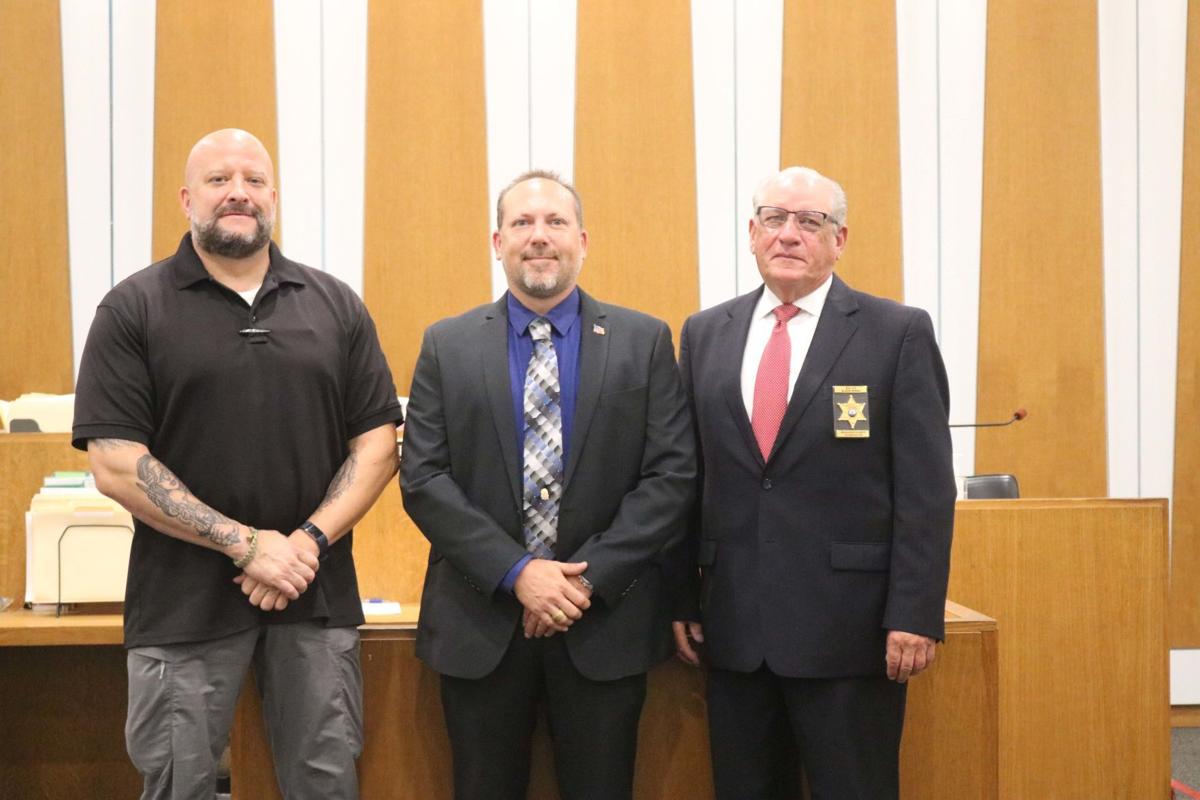 Iroquois County Sheriff Clint Perzee addresses the audience Oct. 1 after he was sworn in as sheriff.

Perzee was sworn in by Judge Michael Sabol early the morning of Oct. 1 at the Iroquois County Courthouse.

Perzee takes over those duties from Derek Hagen, who retired effective Sept. 30 after 29 years in law enforcement.

Hagen, along with another former sheriff, Eldon Sprau, was present at the ceremony for Perzee.

Also filling the courtroom were other members of law enforcement, Circuit Clerk Lisa Hines and many of Perzee’s friends and family.

Sabol then administered the oath of office to Perzee.

After the ceremony, Perzee thanked everyone for attending. “I’d like to first thank my family, my dad, mom, brothers, my kids and my wife. They’ve been with me through this journey and I know it’s not been easy. I’m sure there’s been a lot of worry filled and sleepless nights. I’m sure those will continue to some degree.

“I’d also like to thank Sheriff Spray and Sheriff Hagen for the support they’ve given me over the years. The opportunities they’ve provided to me have really helped me to grow as a police officer and into a law enforcement official that is needed for today.

“I’d like to thank all the people who came today. I’m sure there’s going to be a few bumps in the road, but smooth seas never made a skilled sailor. We’re going to get through any hard times. We’ve got a great staff. Great leadership in the department.”

He asked Deputy Josh Heeren to lead everyone in prayer.

An Iroquois County deputy and investigator, Perzee has said this is the next step in his career and he is ready to serve the residents in that capacity.

“This year will mark 24 years I’ve been with the sheriff’s office,” he said in an earlier interview with the Times-Republic. “This is the next step and I think I can really serve the citizens of Iroquois County in a positive manner. I really believe in our department and the county and I want to make things better for the county, keep things for the people. One of my main focus is drugs in the community. That’s always placed our communities and such a hard thing for people.”

Perzee is a lifelong resident of Iroquois County. He has served in several different capacities in the community, including being a member of the Iroquois West School Board, a deconstructions at the Reformed Church in Danforth, a 28-year member of the Danforth Fire Protection District — where he served as a firefighter and a captain, and as an archery instructor for the Ford-Iroquois Sharpshooters Archery Club for eight years. He also is a member of the Elks Lodge of Watseka.

Becoming a police officer was something that he said he has wanted to do since he was young. He graduated from Iroquois West High School and then went on to Kankakee Community College where he earned his degree and then started working at the Kankakee County Sheriff’s Department as a correctional officer.

He went through the Sangamon County Corrections Academy and graduated in 1997, when he then joined the Iroquois County Sheriff’s Department as a correctional officer. He was hired as a deputy sheriff in 2000 and he graduated from Southwestern Illinois Police Academy. He worked as a patrol deputy for a few years and the moved into the investigations division. He worked on narcotics and general criminal investigations.

Perzee said he has also continued to keep up with his education, taking online law enforcement classes and earning certifications. He was trained by the DEA in methamphetamine lab investigations/dismantling and is certified to investigate homicides and sexual assaults.

As a member of the Illinois Law Enforcement Alarm System Mobile Field Force region 7 team he has been deployed several times to civil unrest situations in the state.

Perzee will fulfill the rest of Hagen’s term as sheriff and then run for the office next year. Hagen had announced several months ago that he would not be seeking another term and a few weeks ago announced that he would be retiring at the end of September.