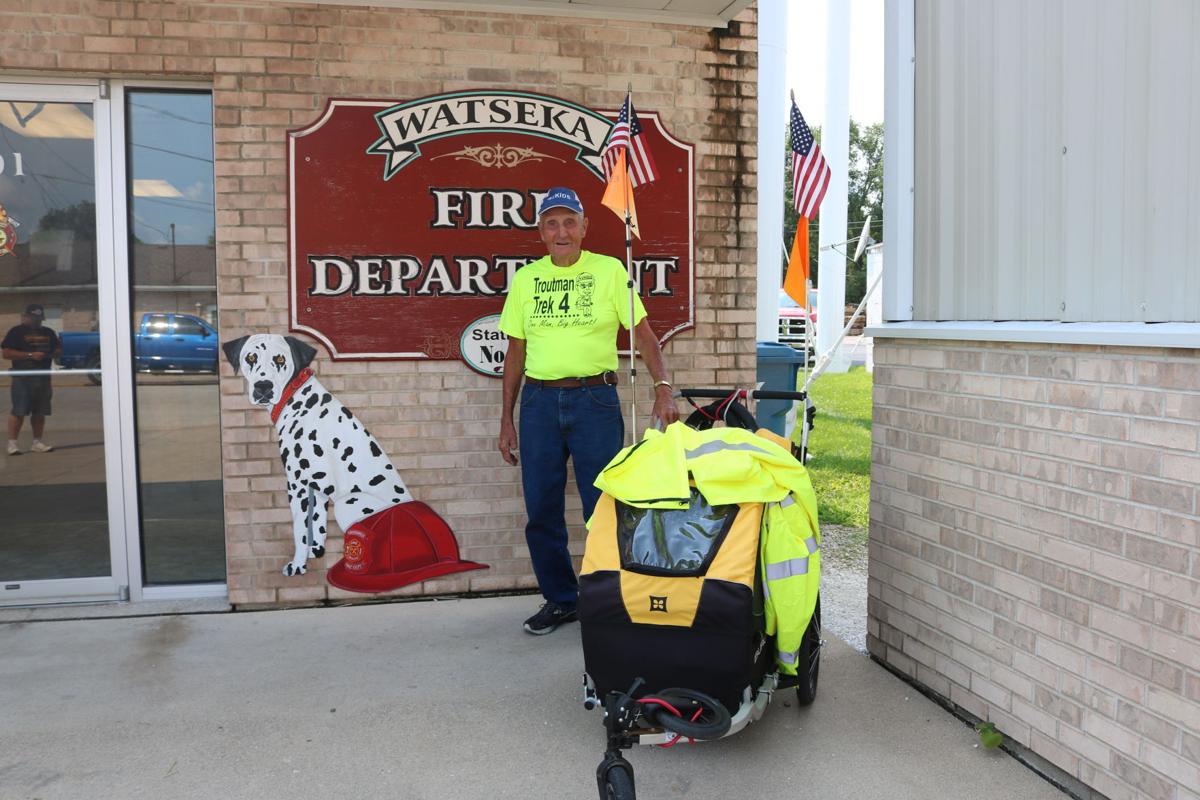 Dean Troutman was given accommodations July 19 at the Watseka Fire Station. He is embarking on a more than 3,500 mile journey through several states to raise money for St. Jude Children’s Research Hospital. 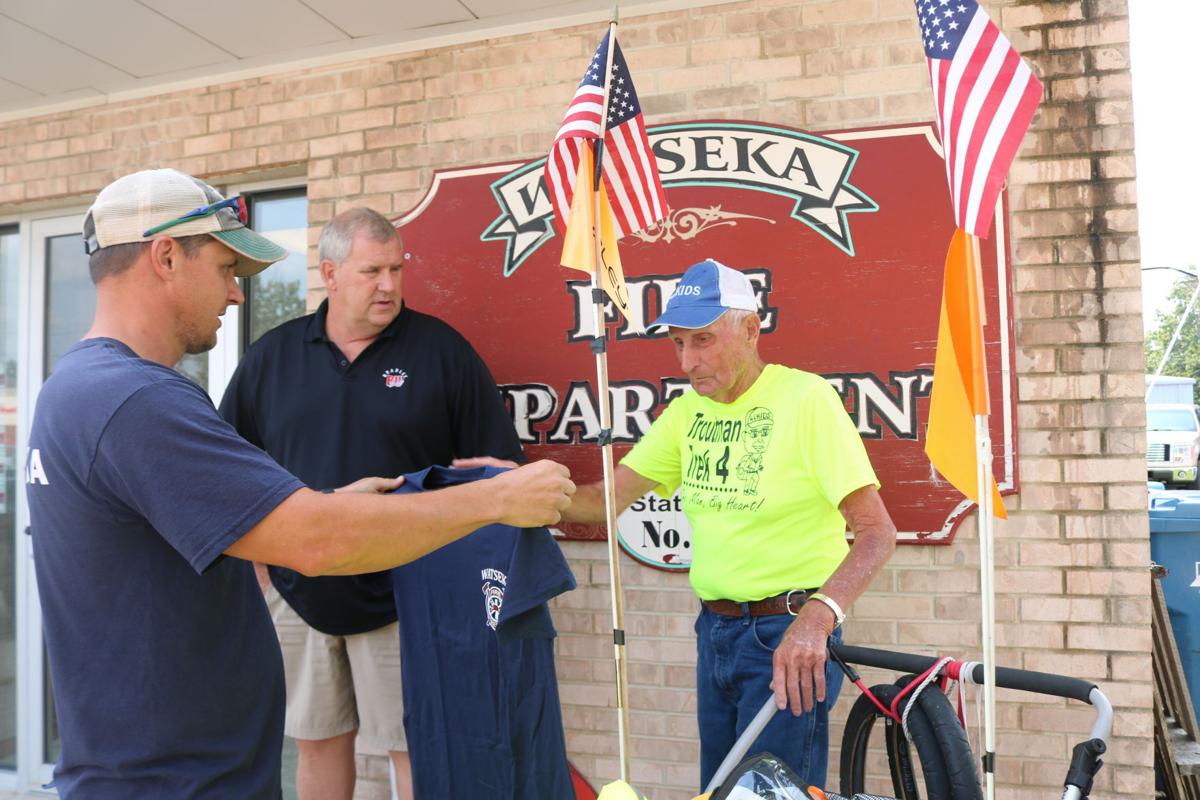 Dean Troutman was given accommodations July 19 at the Watseka Fire Station. He is embarking on a more than 3,500 mile journey through several states to raise money for St. Jude Children’s Research Hospital.

ILLIANA — One man’s 3,500-plus mile trek is all about raising money for kids.

Ninety-year-old Dean Troutman made his way through Illiana this week as he raises money for St. Jude Children’s Research Hospital.

Troutman, who started July 10 in his hometown of Princeville, Illinois, is on his latest, and longest, such endeavor.

He was in Watseka, Illinois, July 19, where he stopped for the night at the Watseka Fire Station. He had stopped the night before in Gilman, Illinois, and was given accommodations there.

The entire journey will take him about a year as he travels through Illinois, Indiana, Ohio, Kentucky, West Virginia, Virginia, North Carolina, South Carolina, Georgia, Florida, Alabama, Mississippi, Louisiana, Texas, Arkansas and Missouri before making it back to Princeville July 10, 2022.

Troutman said along the way he has met many nice people who have helped him out and donated toward his cause.

“Real nice people, just like these nice people here letting me spend the night in their firehouse,” he said of the Watseka accommodations. “People buy me meals, and walk with me and everything.”

As of this writing on July 19, the donation website, troutmantrek.com, notes that donations toward his St. Jude cause have raised $14,029.

Equipped with a wheeled cart that he pushes as he walks along, he keeps a steady and determined pace. The cart carries all he needs for his year-long trip except for food. He has four pairs of shoes, which he rotates wearing every couple of days. He also has two extra tires for his cart in case they need to be changed. A sleeping bag and a pillow, along with a snack or two and a cooler for water are also on the cart.

He also has a picture of his late wife, Dorothy (Peggy) Troutman, to keep him going. They had been married for 65 years before she passed.

He planned the trip route himself. “My goal is to make that circle,” he said.

“I took a map of the United States and drew a circle and then I started checking the state routes and stuff to get to those points,” he said. When he first started thinking about the journey his plan was going to take him to Arkansas and Missouri in January. “That’s too cold to get back there that soon. So I made a sashay into Texas over past Houston to use up a couple of months time. I have a sister who lives out west of Houston, so I made it (the itinerary) to her place and I come back, it works out just right, I get back into Arkansas in March and it will be springtime then.

“There’s only one place I have to be at any certain time, and that’s Troutman, North Carolina. It’s where my ancestors landed in the early 1800s. They founded that city and named it Troutman. They had lots of land and a big plantation there. They have a reunion every year, the second Saturday in October for all the Troutmans all over the United States. I’ve been going to a few of them by driving there. This one I’m walking there. I have to be there by Oct. 10. That gives me 90 days and it’s 900 miles. I’ve got to keep stepping along and keep on my schedule or I’ll miss the reunion.”

Troutman said during this part of his journey he is wanting to average about 10 miles a day, though he said he has done a little better than that so far. As the journey progresses he would like to average 15-18 miles per day. “I think when I get into the mountains in eastern Kentucky and West Virginia I’m not going to do it. I’m not going to make 15 miles a day then so I’m trying to gain time here if I can.”

The first time he got out his walking shoes for a walk such as this was in 2014, to raise money for Troutman Park in Princeville, which was established in memory of Peggy. That 700 mile journey raised $70,000, which was used for playground equipment in the park.

His second journey was when he decided to start raising money for St. Jude. “I walked to Memphis four or five years ago and walked in that hospital and saw those kids. They need help,” he said.

“I just like doing it and as long as it’s raising money for St. Jude, I don’t need anything else,” he said.

He is determined to reach make his goal. “I’m not saying I’m going to make it — 90 year olds knees, 90 year ankles and hips — something could happen,” he said.

He doesn’t really train for such walks, but says he has always been one to keep busy.

His occupation for many years was as the manager of a Farmer’s Coop Grain Elevator in Monica, Illinois. “That’s where I lived for about 50 to 60 years, which is three miles out of Princeville.”

His family keeps in regular touch with him. During his stop in Watseka, his son Jeff had come from the Bloomington area to bring him a few items and was able to take him out to dinner. Some of the social media are monitored by family members.

Those who wish to make a donation to St. Jude through him can do so on his fundraising page, TroutmanTrek.com. People can also make checks out to St. Jude and mail them to St. Jude Challenge — Troutman Trek 4, Attn.: Alex Fountain, 501 St. Jude Place, Memphis, Tennessee, 38105. There is also a Facebook page for TroutmanTrek 2021.