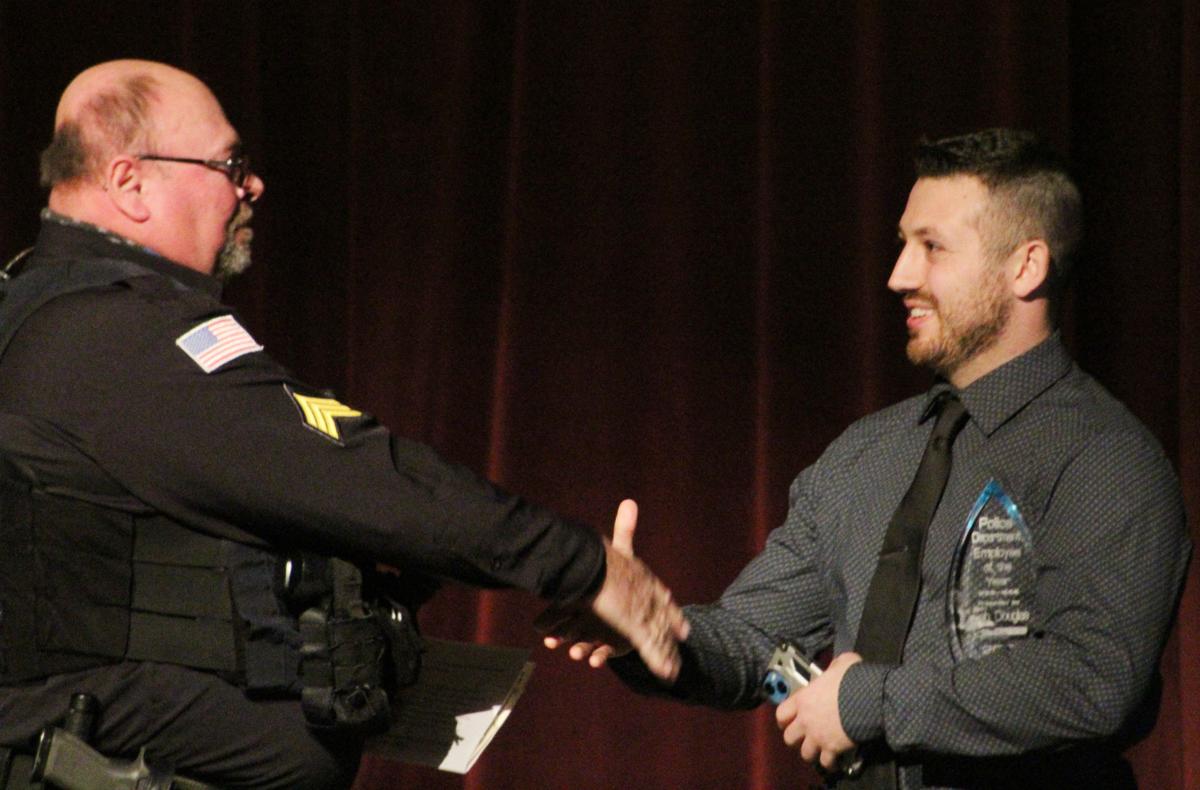 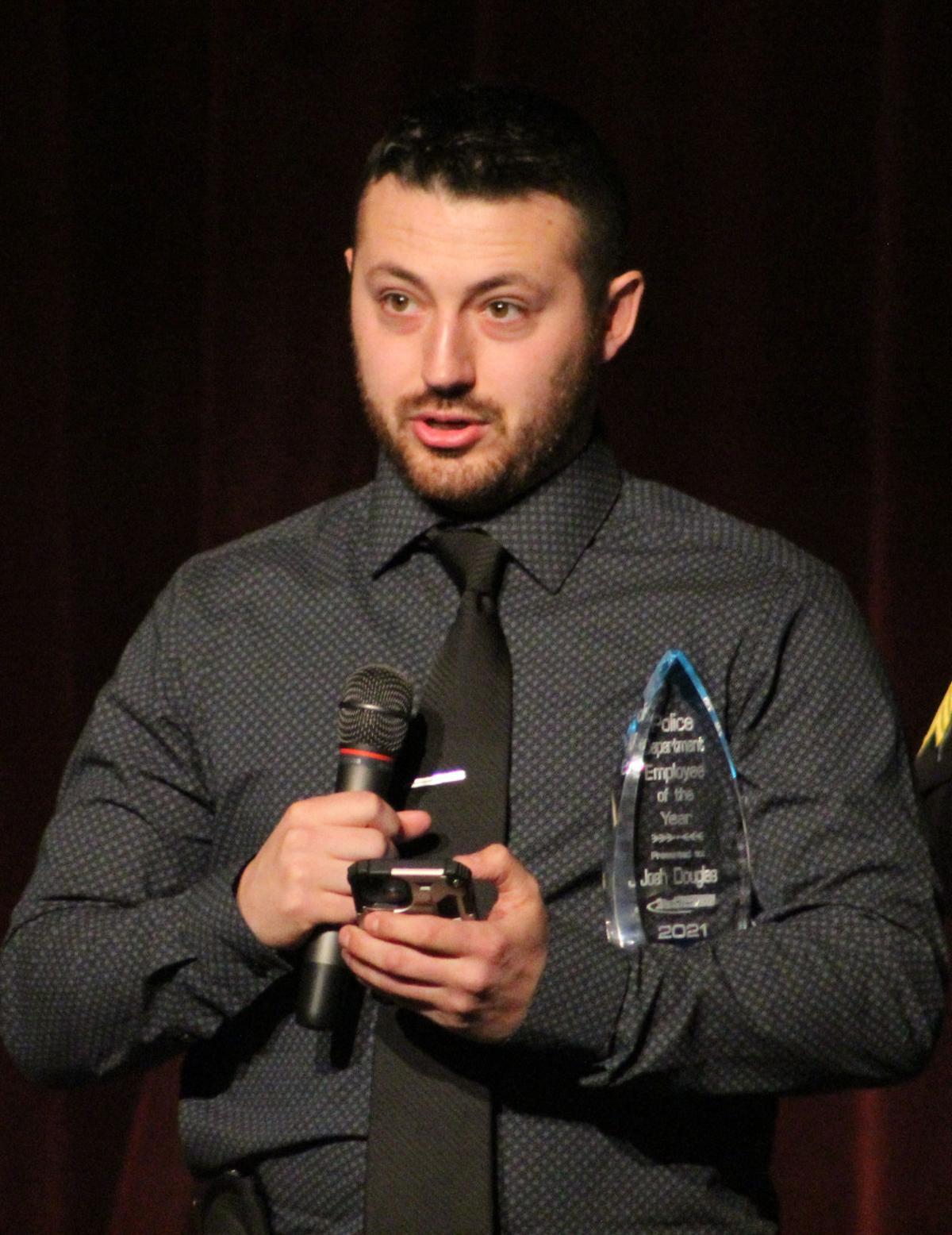 Josh Douglas was one of several community members who were honored Saturday at the Lorraine Theatre during the Hoopeston Community Awards Ceremony.

During the awards ceremony, the Hoopeston Jaycees present their annual service awards recognizing the contributions of community members over the past year.

Douglas, who is from Watseka, received the Hoopeston Police Department Officer of the Year.

Dobkins said Douglas began his career with the HPD in September 2018.

“He is dedicated and determined and shows compassion and caring for the job and the community,” he said. “He has pride in the job that he does keeping the community safe.”

Dobkins said Douglas is dedicated to getting as many drugs out of the community while enforcing the law.

Douglas thanked his fellow officers and the community after receiving the award.

“I just wanted to say thank you to my command chain and my fellow officers for making sure I make it home safe to my family every night,” he said. “I want to say thank you to the community for putting me in this position of power and trusting me and I hope I’m living up to all your expectations. I’ve met some of the most interesting people in the world here in Hoopeston, Ill., but, at the same time, I’ve made a lot of great connections and met a lot of great people here.”Another award presented during the night was the Hoopeston Emergency Management Agency (HEMA) Volunteer of the Year Award.

Kohl said the award was given out in recognition of various efforts Hardcastle has put forward during the past year.

“This last two years has been a very trying time for all of us with COVID at the top of the list,” he said. “We have seen so many changes in our lives.”

Kohl said he spoke with all of the HEMA members about who they wanted to nominate for the award and they all agreed that Hardcastle was the only choice.

“Everyone of them agreed there’s only one person who deserves this award,” he said. “That’s our coordinator Bradley Hardcastle.”

Kohl outlined some of the hard work that Hardcastle has put in during the pandemic.

“When the COVID started, the government, state and counties, came out with guidelines that everybody had to follow and it was up to the local coordinators to find out what they were and present them to the city council to make sure they’re being followed. Since that time, Brad has worked very hard with the city council as well as setting up a committee to stay on top of all the changes and inform the community so we can all try and live safe lives.”

Kohl concluded by praising Hardcastle for going above and beyond to serve the community.

“All the HEMA group thought that Brad has gone above and beyond trying to do the best, maintain the highest level and try and keep the community safe as safe as he can during the COVID out break,” he said.

Firefighter of the Year was the next honor bestowed during the ceremony.

Bird said it is harder and harder to choose a winner a winner for the Firefighter of the Year Award because of the dedication of everyone on the department.

“We have 19 current members and everybody puts in their time, hard work and dedication into the community,” he said.

Bird said Wagoner wanted to join right out of high school, but the department didn’t have the right age requirement at the time. When the age requirement was dropped down, Wagoner joined up.

Bird highlighted how Wagoner has stepped up to help out over the last year during the pandemic, specifically how he helped continue to educate local children about fire safety.

“He’s in charge of my community projects, which teaches all the young kids fire safety, stop drop and roll,” Bird said. “He goes to all the preschools, first and second grade and kindergarten.”

Hardcastle, who said he was presenting the award on behalf of himself and Auxiliary Sgt. Chip Houmes, who wasn’t able to attend the ceremony.

Ramos joined the department in 2019.

Hardcastle said Ramos his the ground running when he joined the auxiliary police.

“Sgt. Houmes and I can always to help cover events, work details and be a dependable resource for us,” he said. “You’ll never hear him complain, at least to us, and he is a great asset to our department, his community and he is the proud father of a newborn child.”

The Jaycees presented the Distinguished Service Award next.

Hardcastle presented the award to Jordan Crook, editor of The Hoopeston Chronicle.

“Each year, the Hoopeston Jaycees award the Distinguished Service Award to a member of our community who goes above and beyond in their work and embodies the Jaycees’ motto of ‘Service to humanity is the best work of life.’”

Prior to presenting the award, Hardcastle asked any past Distinguished Service Award winners to stand and be recognized.

“It’s a distinguished club,” he said. “And it is made up of people are of Jaycee age, so you age out of the Jaycees at 42, so it is really a young person’s award.”

Crook, a Milford native, started with The Chronicle in 2008.

“This year’s award winner is a fixture at any event around town,” Hardcastle said. “He works tirelessly to cover any event. From a public meeting to a children’s event, you will see him there. He is fair in his reporting and you will never hear him complain about anything. He goes above and beyond to paint our community in a positive light.”

The final award presented by the Jaycees during the ceremony was the Friend of the Jaycees Award.

“Each year we like to honor a person or business who goes above and beyond in helping us help our community,” Hardcastle said. “This year’s honoree has helped the organization for many years. Whether it’s providing meeting space, assisting with our Post Prom project or meals during the Sweetcorn Festival and Sweetheart Pageant. He’s always willing to help. It’s gives me great pleasure in awarding this year’s Friend of the Jaycees Award to Doug Wagoner and Fast Lanes.”

The Chronicle has a complete video of the Community Awards Ceremony as well as the Miss Hoopeston Pageant available at www.thehoopestonchronicle.com.