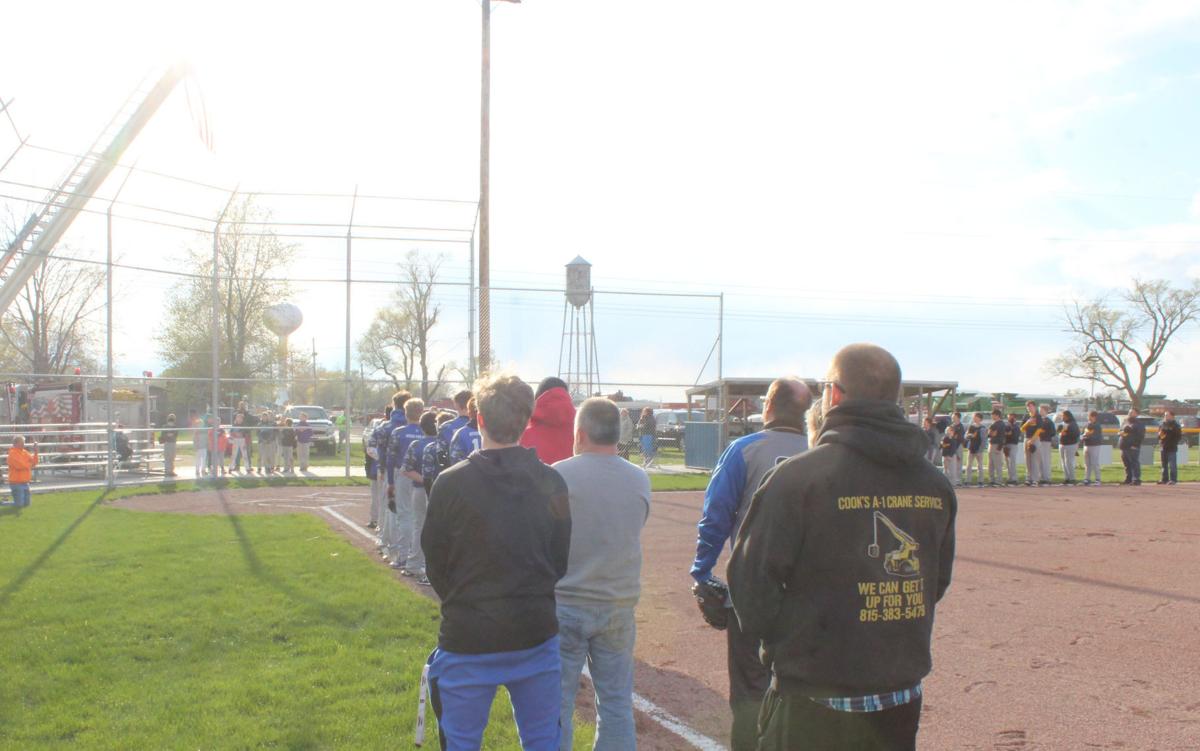 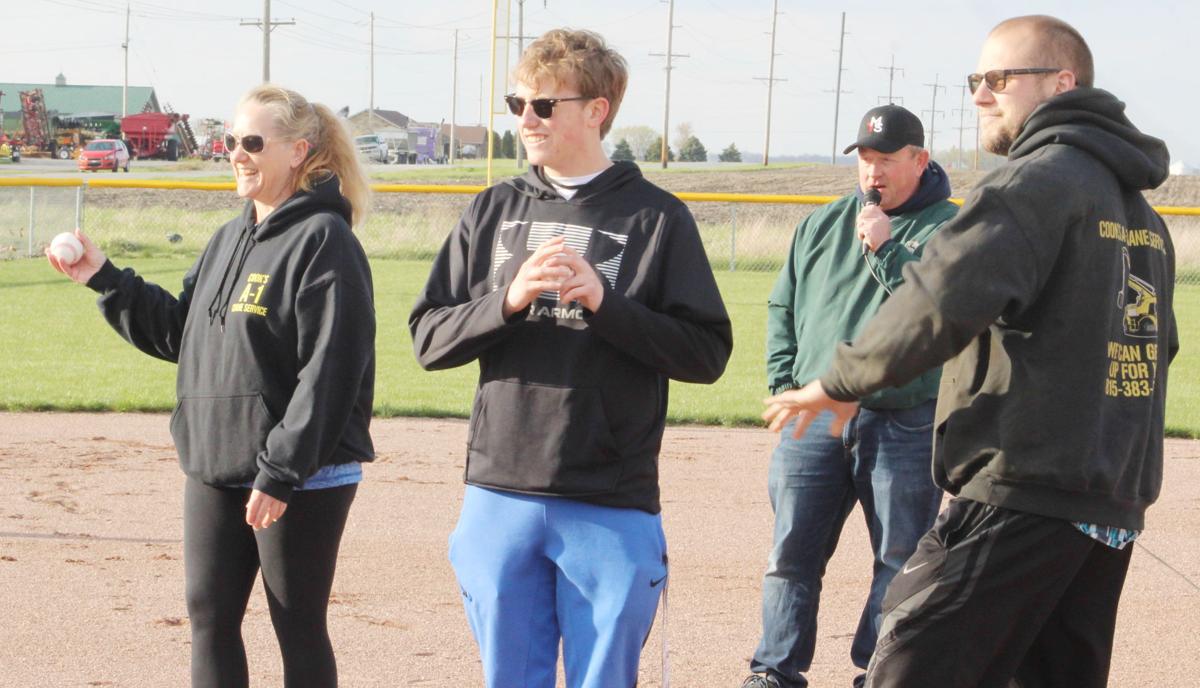 Family members of the late Jim ‘Cookie’ Cook, his wife, Dorrie, and sons, Max and Zak, throw out the first pitch during last week’s Milford-Sheldon Little League game in Milford. 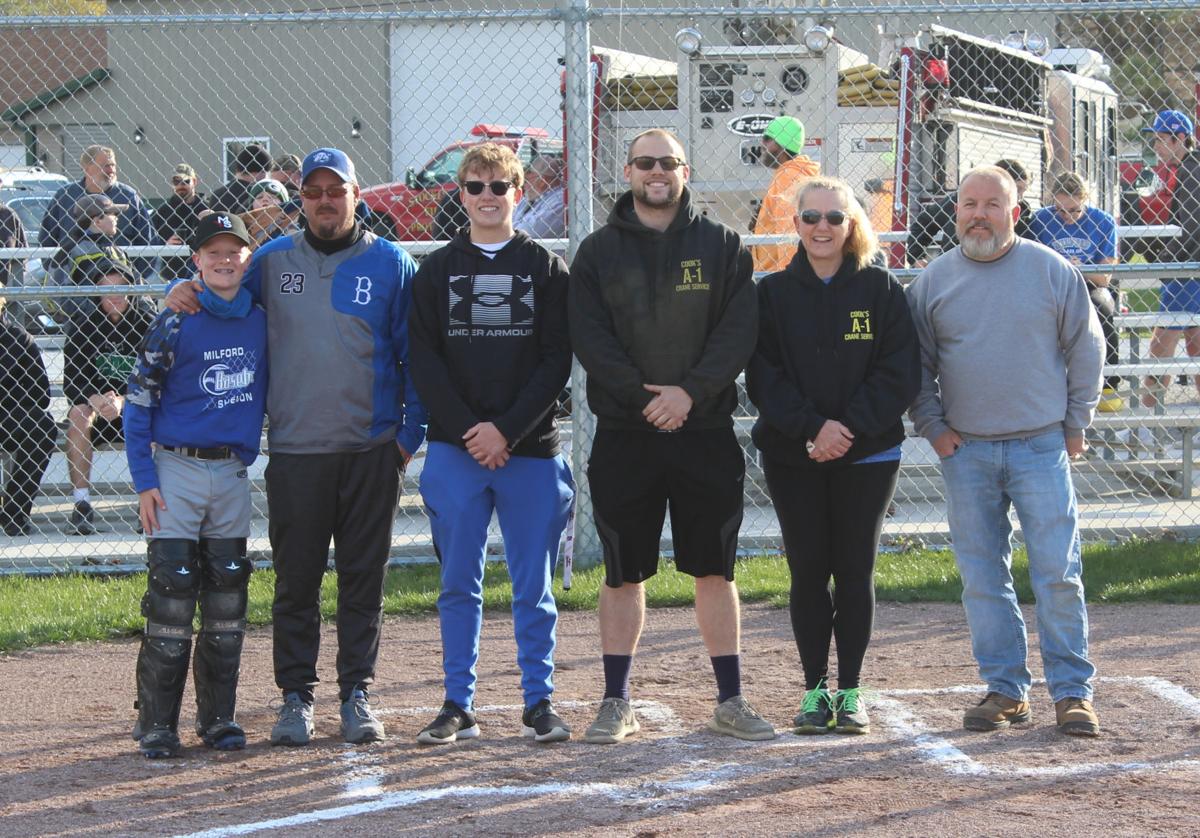 Family members of the late Jim ‘Cookie’ Cook, his wife, Dorrie, and sons, Max and Zak, throw out the first pitch during last week’s Milford-Sheldon Little League game in Milford.

The Milford-Sheldon Little League played their first games under the new lights at the fields in Milford April 21.

The lights were the most recent addition to the fields and one of the final steps to completing a vision that was laid out by Jim ‘Cookie’ Cook years ago.

Cook, a long-time supporter of the league, spearheaded the construction of the fields several years ago.

Sadly, Cook passed away in late 2015 and was unable to see his vision for the fields finished.

Cook was honored prior to the first games that were played last week with his wife and sons throwing out the first pitch and members of the Milford Fire Department, of which he was a member, using one of their engines to raise a flag high above the field.

Cook’s wife, Dorrie, threw out the first pitch for the game alongside Cook’s sons, Max and Zak, said it was nice to see that the work on fields completed and the lights going for everyone to enjoy.

“My husband worked really hard to get this to happen,” she said. “It’s just too bad he’s not here to see it all.”

Asked what she thought her husband would think of the finished project, Dorrie said it was just wonderful and said it was too bad her children were too old to play on them.

Asked what inspired her husband to get so involved with project initially, Dorrie said her youngest son, Max, loves baseball and was seven or eight years old when he developed his love of baseball.

“I think that’s what got Cookie so involved in baseball,” she said. “A lot of it was motivated by Max.”

Cory Birch and Tom Marshino, who worked with Cook on the project, spoke about the work that Cook put into getting the fields created.

“He played a key role in getting the fields here in Milford,” Marshino said.

“He’s been wanting to get these fields here in Milford for 20 years,” Birch said.

Birch said he has paperwork from the Village of Milford from when Cook was still mayor that shows Cook was trying to trade ground-for-ground to get the fields set up then.

Early construction on the fields had started shortly before Cook passed away, with Birch recalling that they had just started to lay out the fields a few weeks before Cook’s passing.

“It’s been a five-year process,” Birch said. “It takes a lot of time.”

Birch said he served with Cook on the fire department for 20 years and Marshino knew him for a long time through work and the little league organization.

An invitation to all Illinoisans to nominate a statesman or stateswoman

“Cookie just wanted what was best for the kids,” Birch said. “Whether it be peewee football, baseball, he was always involved.”

Birch said they did have a celebration prior to the first game that was played on the fields a few years ago, but last week was the first time players had a chance to play under the lights due to the COVID-19 pandemic stopping last season so they chose to honor Cook then.

Marshino recalled that Cook joined the Milford-Sheldon Little League organization in 2014 or 2015 and was gung ho about taking on projects.

“He was hung ho in all communities,” he said. “Whatever we could do for the kids to benefit, that’s the way he looked at it.”

“He was always action-oriented, that was Cookie,” Birch said. “He wasn’t talking about it. It got done. If he said he was going to do it, it was guaranteed to get done.”

Birch said the volunteers that Cook organized to get the project started and just trying to keep the dream going.

“And it’s getting better every year,” Birch said.

Birch hopes that the fields will keep growing and growing as more people visit the fields and more kids come out to play.

Marshino said the work that Cook had originally outlined on the fields is pretty close to completion, pointing out that the only things not finished that were included in the original plans were a batting cage and a green wall.

“His original design is pretty much done,” he said.

When asked what they thought Cook would think about the fields, Birch and Marshino said Cook wouldn’t want any recognition for his role in them.

“He wouldn’t want any recognition, I can tell you that,” Marshino said.

Birch said Cook wanted the volunteers who put in the work to make the fields a reality to receive the credit for the work that went into creating them.

He said the fields were made by volunteers dedicating their time off on weeknights and weekends.

“Anything and everything, that’s what they were doing,” Birch said.

As such, Birch said they plan on calling the fields Cook’s Volunteers Fields.

“We just want to make sure we keep his memory alive,” Birch said. “I don’t want anybody to forget about him.”