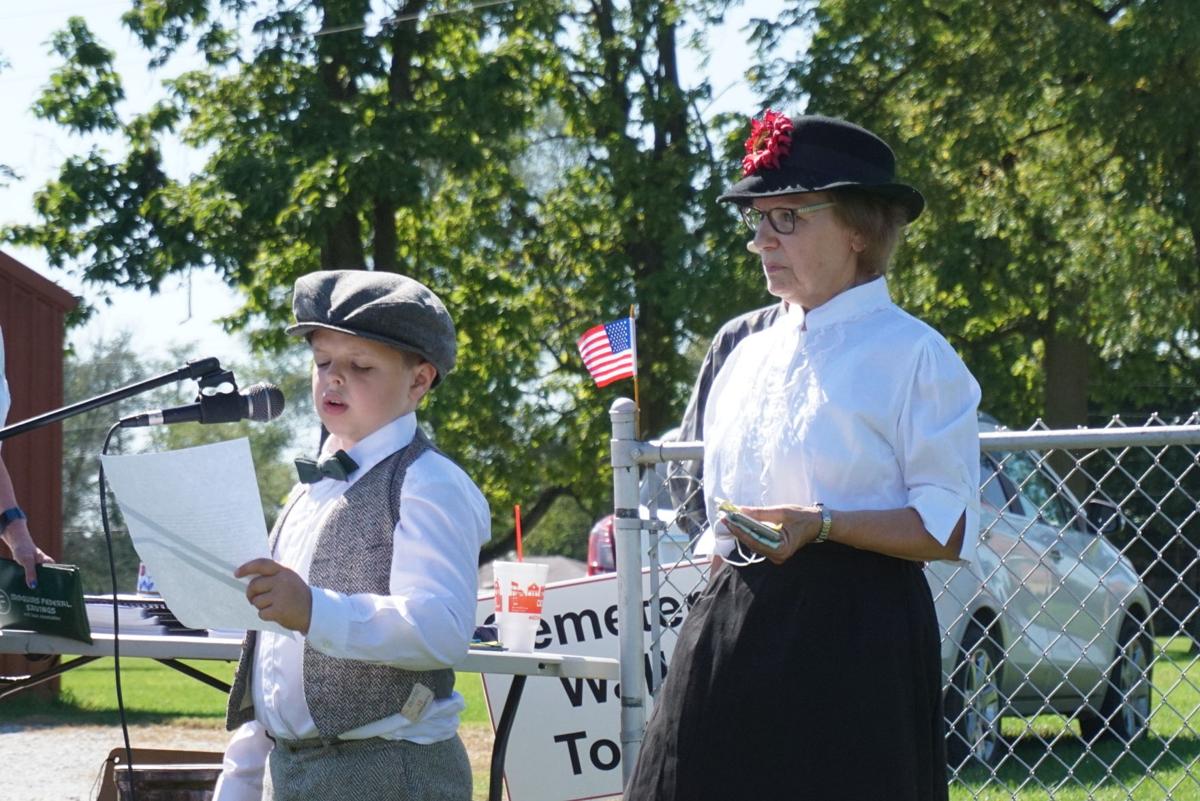 Alan Loy (left) gave a brief history of the village of Beaverville after Diane Gagnon (right) gave a welcome to the ICGS’ 8th annual cemetery walk. The village was originally named St. Mary’s, but the name was changed in 1905 when it was learned a St. Mary’s, IL, already existed. Gagnon served as the coordinator for this event. 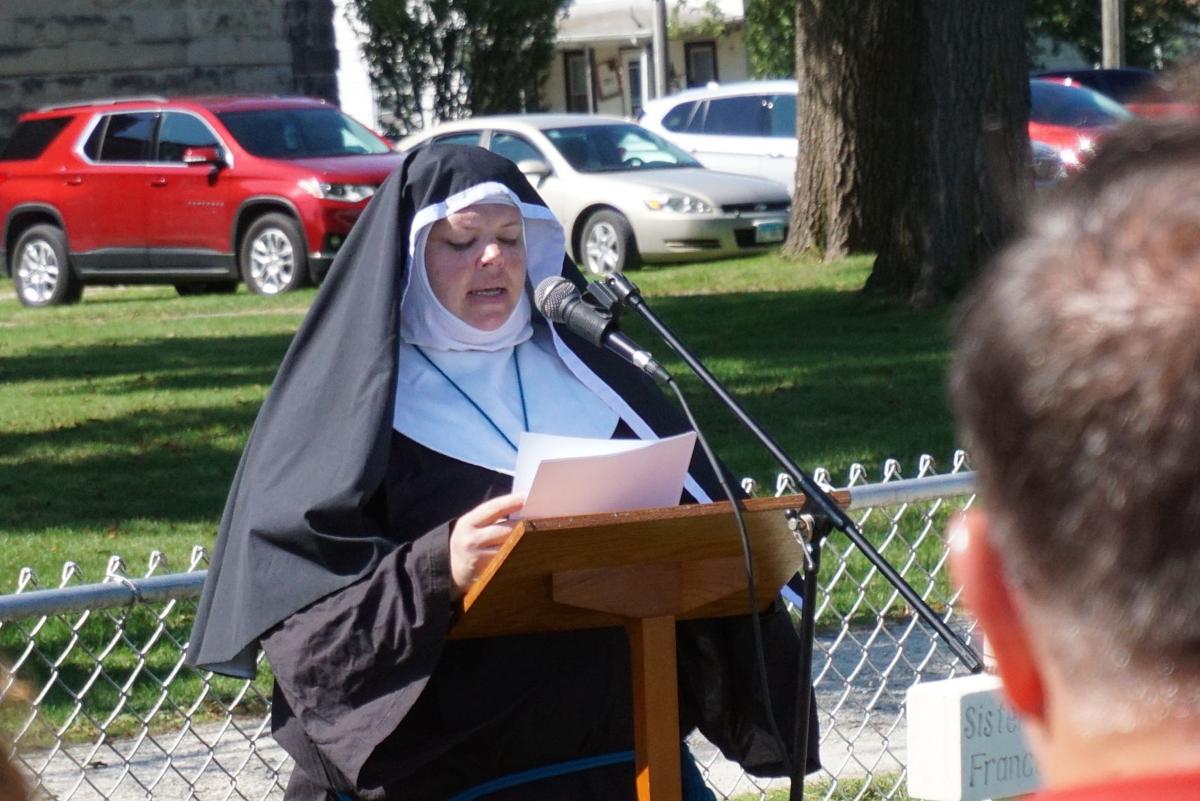 Melisa Loy shares the story of Sister Mary Mediatrix, who was blessed with the apparitions of Christ. 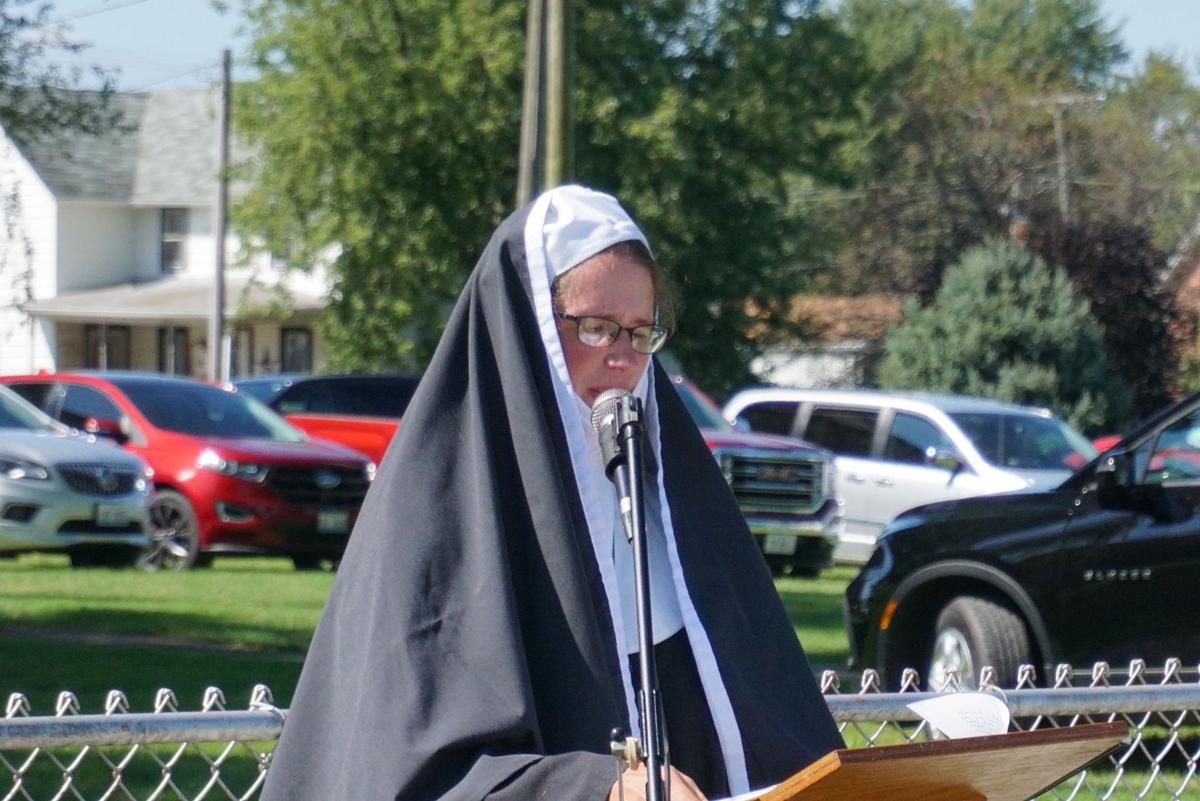 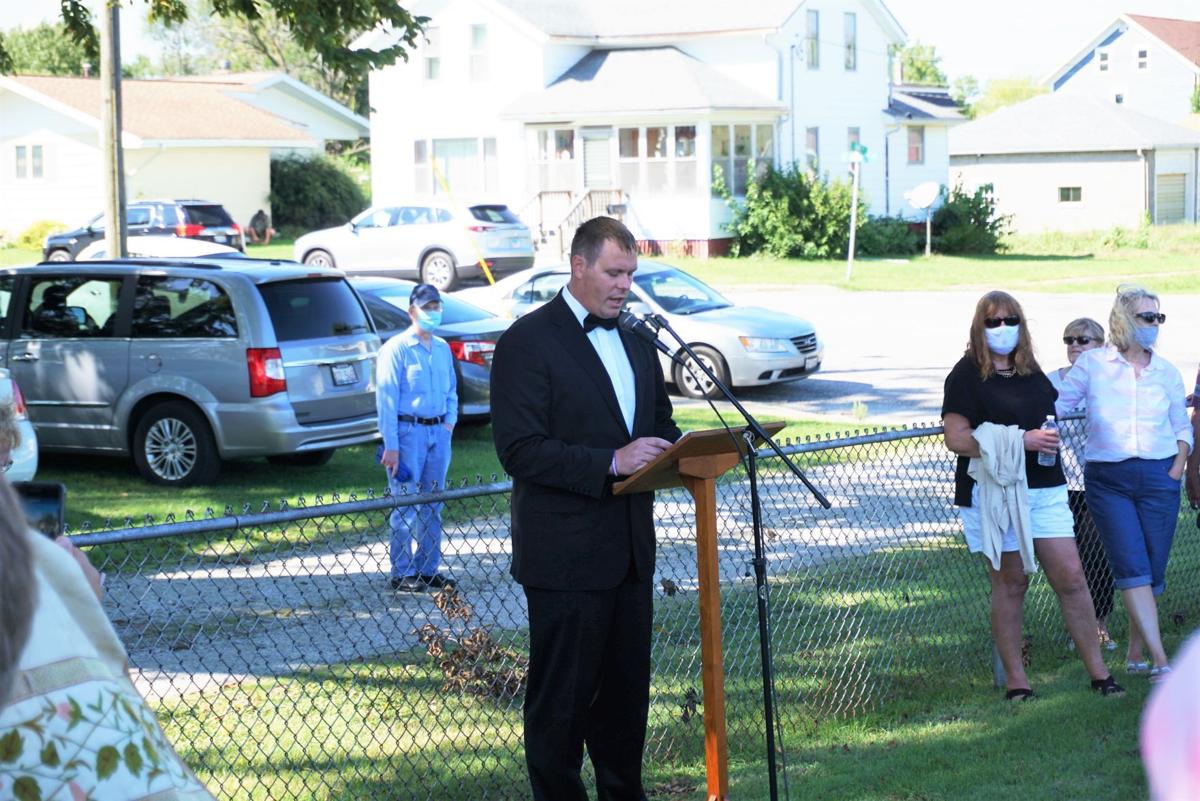 Relating the story of Hilaire Lambert is Josh Holburg, of Buckingham. Hilaire was born in Quebec, Canada, and his family owned several businesses in Beaverville, including grain, coal, lumber, a bank and tile factory. 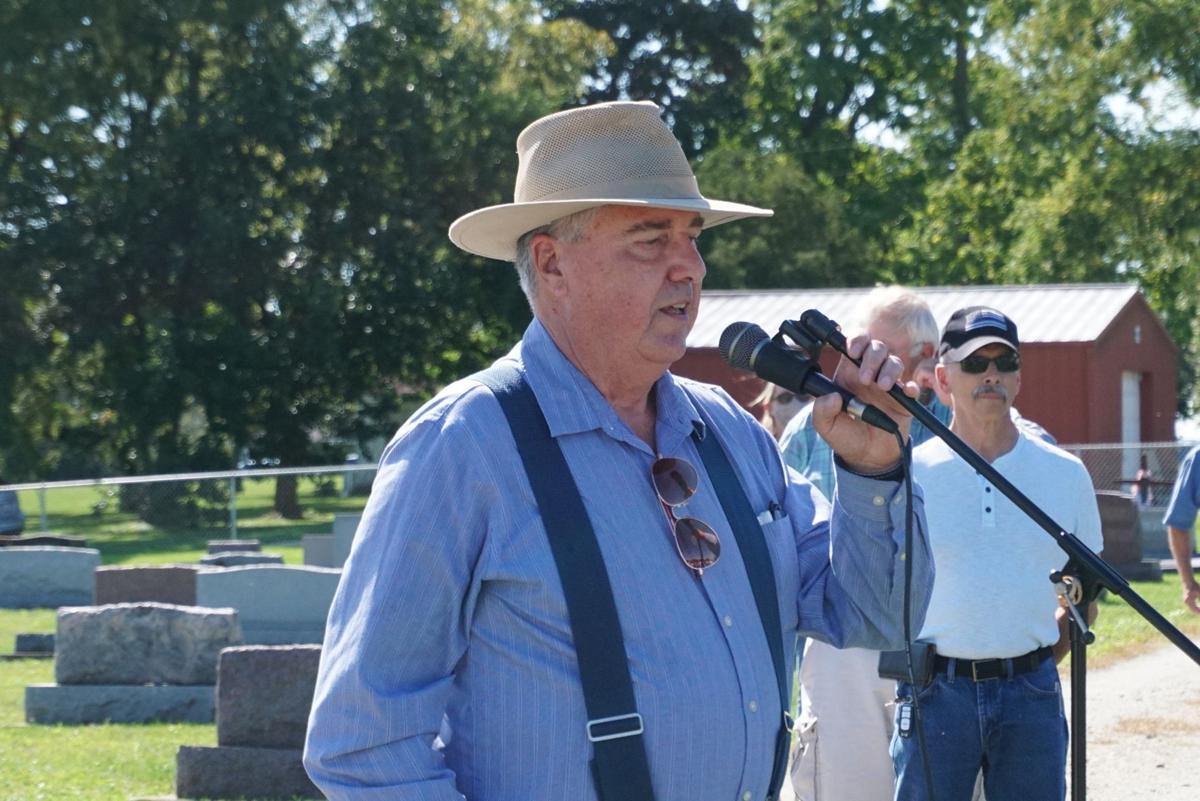 Jim Curby is shown here as he shares the story of his grandfather, Eddie Curby. Eddie, a self-taught carpeneter, build a few of the houses and barns in the Beaverville area. In 1927 Eddie quit farming to purchase the local hardware store, which Jim would eventually be the last owner of.

Alan Loy (left) gave a brief history of the village of Beaverville after Diane Gagnon (right) gave a welcome to the ICGS’ 8th annual cemetery walk. The village was originally named St. Mary’s, but the name was changed in 1905 when it was learned a St. Mary’s, IL, already existed. Gagnon served as the coordinator for this event.

Melisa Loy shares the story of Sister Mary Mediatrix, who was blessed with the apparitions of Christ.

Relating the story of Hilaire Lambert is Josh Holburg, of Buckingham. Hilaire was born in Quebec, Canada, and his family owned several businesses in Beaverville, including grain, coal, lumber, a bank and tile factory.

Jim Curby is shown here as he shares the story of his grandfather, Eddie Curby. Eddie, a self-taught carpeneter, build a few of the houses and barns in the Beaverville area. In 1927 Eddie quit farming to purchase the local hardware store, which Jim would eventually be the last owner of.

Gagnon welcomed visitors to the cemetery, followed by Alan Loy giving a brief history of the cemetery and village. Loy, a 4th grader at Donovan Elementary School, is a member of St. Mary’s Church and the Donovan Ag 4H Club. He enjoys basketball and baseball.

Alan told how in 1851, 32 families pushed their wheelbarrows (purchased in what is now known as Chicago) full of personal possessions through the swamps to the area known as Ste. Marie. The travelers settled in this area because of the good land and many creeks. Common names of the new settlers included Fortin, Boudreau, Arseneau, Lafond, Benoit and Nouri. In 1905, the settlers learned there was already a St. Marie, IL, so the name was changed to Beaverville, which was inspired by the abundance of beaver.

The history of nine people interred in the cemetery were shared at the walk. The first to speak was Melisa Loy as she portrayed Sister Mary Mediatrix, who was born Frances Hennessey. Hennessey was born June 4, 1911, in Chicago and was not quite 16 years old when she dropped out of school to become a nun. At the urging of her childhood friend, Hennessey entered the Servants of the Holy Heart of Mary novitiate in Beaverville in 1936 and given the name Sister Mary Grace. Within six months she began having mystical experiences, feeling the pain and passion of Jesus Christ.

Melisa Loy is a nurse and CPR instructor; she and her husband Ryan have two children: Madelyn and Alan. The family has membership in St. Mary’s Church.

Jessica Runner, Milford, portrayed Mother Marie Eustelle, who was born in 1867 in Germany. At age 16 she went to Paris to the Orphange of the Holy Family which helped children displaced from the French Revolution. In 1889, a call was entered for a mission in the US; in 1895, the Holy Family Academy opened in Beaverville and Mother Marie Eustelle was the first Mother Superior. She served until 1921 and then spent the next five years as Mother Superior of Our Lady Academy in Manteno.

Madelyn Loy portrayed the granddaughter of Francis Besse. Besse came to Ste. Marie in 1849 and led the settlement encouraging men to open businesses needed by a farming community. His general store was located in the northeast part of Beaverville.

Madelyn has belonged to Studio on Main 10 years and enjoys softball, basketball, volleyball and cheerleading. She is the daughter of Ryan and Melisa Loy.

The story of Hilaire Lambert was shared by Josh Holburg of Buckingham. Lambert was born in Quebec and came to the US at a young age. He married his wife, Josephine, in 1867. He began as a farmer and by the age of 30 he owned a grain, coal and lumber business. In the late 1800’s he opened a bank and started a tile factory. The bank has been credited with saving several businesses in town from the Depression. When he died at age 84, his son Louis took over the bank and factory.

Ryan Loy shared the story of Rev. Louis George Langlais, who came to Ste. Marie in 1882 to assume the pastorate. He began his pastorate in the 40-foot by 60-foot wooden structure built in 1856, right next to the cemetery. He helped get a new rectory built, which still stands today.

Another dream was a Catholic school for the children of his parishioners and the movement for a new school steadily grew. In 1895, the building was near completion and the Holy Family Academy was begun. The school had over 300 students at its best and remained open 74 years. On May 4, 1902, Rev. Langlois suffered a cerebral hemorrhage. His former parish conducted a vigil for him for three days until he passed on May 7. After his death, a monument was erected in his honor at his burial site.

Relating the story of Ida Arseaneau was Janet Loy, who, along with her husband, farm in the Donovan/Beaverville area. Her family has lived in the area since 1833.

Ida Arseneau was one of two people who perished from injuries sustained in a tornado in 1916. She lived on a farm northeast of Beaverville, and on Tuesday, March 21, 1916, a cyclone hit the area at 9 p.m. Also dying was Anna Ponton, who lived in Beaverville, and was buried next to Ida in the cemetery. Not one barn or outbuilding was left standing between Beaverville and St. Anne. Ida’s home was turned over and burned, with other members of her family being injured. She was pinned under the stove, suffering a broken shoulder and burns on her upper body. One of her sons was scalded by hot water from the stove tank.

Ida’s son had gotten her out from under the stove and gotten her out of the house. Her injuries were about her upper body and she was taken to the Louis Arseneau home where she died three days later at the age of 47. Mrs. Ponton died the day after that.

Jerry Moore portrayed Oliver Caillouette, a Civil War veteran who spent 29 years in Kankakee State Hospital. Caillouette was born outside Quebec in 1834, although his headstone reads 1824. The family moved to Ste. Marie’s in 1855, he married in 1859, and became a US citizen in 1860, along with the rest of his family. Not long after, when the Civil War began, Caillouette enlisted in the Army for three years, serving as a Private in Station E of the First Illinois Light Artillery Regiment.

Caillouette was in the Battle of Shiloh in 1862, which was a blood bath. It was here where Caillouette lost his nerves and had a breakdown. He didn’t get to see a doctor for six months and began having fits where he would just fall down. Moore shared some of the war duty Caillouette went through, noting he was discharged on Dec. 24, 1864. He made his way back home but within eight days he had a massive collapse from the fits. These fits continued and some days he had as many as eight.

By the time his pension had come through, he had deteriorated so badly his wife couldn’t take care of him. He was later declared insane in Iroquois County court and because of how violent he had become he was sent to the Eastern Illinois Hospital for the Insane at Kankakee in November, 1889. He remained there from that point on until his death April 2, 1910. His cause of death was listed as exhaustion and epilepsy. His wife died in 1930 but there wasn’t enough money to cover the cost of having her death date carved on her stone or to purchase the small “Mother” side stone.

The life of Eddie Curby was shared by his grandson, Jim Curby. Eddie, a left-hander, was a self-taught carpenter who only attended school to the sixth grade. He first owned a dry goods store with Lawrence Boudreau Sr., and purchased it after a few years. Curby Hardware remained in the family for several generations, with Jim being the last owner.

The last speaker was Daniel Flora, of Champaign, who portrayed Lawrence Boudreau Sr. Flora,who has been a Civil War and World War II re-enactor, has family roots in Gilman and Buckley. Born in September 1896, in Beaverville, Boudreau Sr. married Ida Francouer in 1919. In about 1920 he opened a grocery and ran that until about 1927 when he went into business with Eddie Curby. He continued with the business and purchased Eddie Curby’s share in 1932. Boudreau Sr. continued to run the business until 1946 when he son came home from World War II. In 1956 he sold the business and entered retired life until his death in 1972.

After the walk, attendants were invited to go to St. Mary’s Church and hear a brief history of the 100+-year-old structure. The histories were presented by Mary Jane LaFond, Sister Linda Hatton and Ryan Loy.