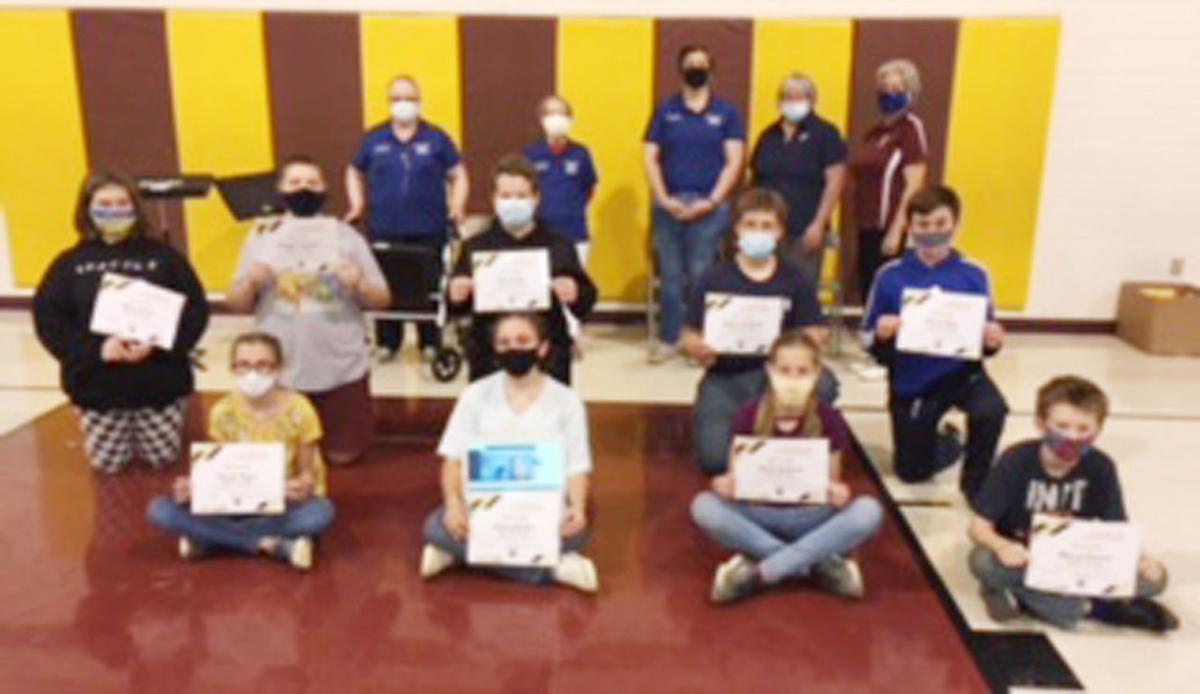 In the first and second rows are the 10 students who submitted essays. One student was unable to attend but is shown on the laptop held by the second student from the left in the front row. In the back row are the four participating Auxiliary members with the fifth and sixth grade teacher Mary Smith. 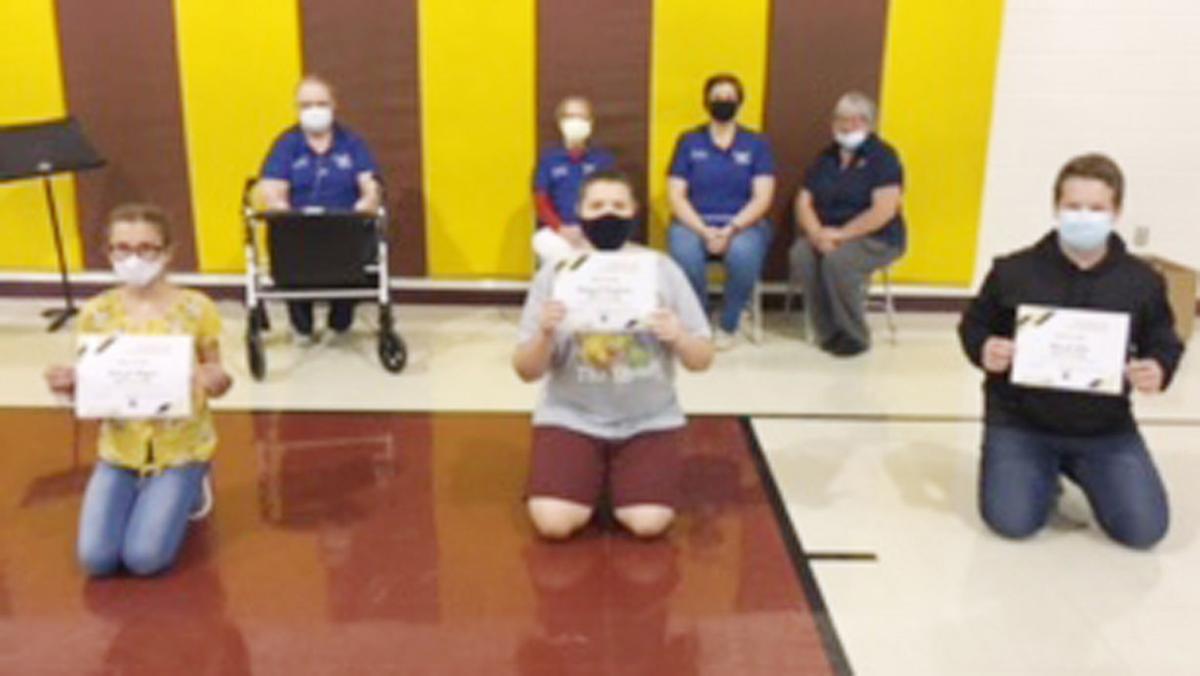 In the first and second rows are the 10 students who submitted essays. One student was unable to attend but is shown on the laptop held by the second student from the left in the front row. In the back row are the four participating Auxiliary members with the fifth and sixth grade teacher Mary Smith.

Every year the National Veterans of Foreign Wars Auxiliary sponsors a Patriot’s Pen essay contest, which has scholarships attached to it, open to all fifth through eighth graders across the USA.

This year St. Paul’s Lutheran School in Woodworth submitted 10 entries from their seventh and eighth graders to the Buddy Egnew VFW Post 4826 Auxiliary in Hoopeston.

Members of the Auxiliary had to judge the essays and pick one to be sent on to the district level judging.

An award ceremony was presented Nov. 10 in the gym at St. Paul’s Lutheran School. Seven of the participants received a gift bag and a participation certificate.

The top three winners received a gift bag, a winner’s certificate, and a monetary award.

The essays from the top three winners are printed below:

What Patriotism is to Me

The definition of Patriotism is the quality of being devoted to something or someone very strongly. Now the definition of patriotism to me is what the founding fathers did for the country, the symbols we have adopted as our own and how we in America celebrate how this country was formed

The founders settled this country and made America the best country with the best government in the world. Former president Ronald Reagan said, “ America is a shining beacon on a hill”. People like John Adams, Sam Adams, John Hancock and so many more have settled this country and so many of the founding fathers lost everything they owned, sometimes even their lives. They had true patriotism in my eyes because they sacrificed everything for this country. Many of the American symbols were chosen by these men.

Speaking about symbols of America, let’s talk about some. The American flag is the ultimate symbol for our country. The union or blue part with the 50 stars stands for the 50 states united. The red symbolizes valor, the white symbolizes innocence and the blue symbolizes justice. The thirteen stripes represent the original thirteen colonies. Another symbol of America is the Bald Eagle. The Bald Eagle stands for the freedom and strength of America. The last symbol that I will be talking about is the Statue of Liberty which was made by the french and stands for our Freedom.

The United States of America celebrates the founding fathers and what they did and chose as symbols by Fourth of July. The holiday Fourth of July is celebrating freedom in America. We have parades on this day to show who and what they have done for this country (and to show what is happening in the town). The fireworks are the big thing and we shoot thousands of fireworks on the Fourth of July to show our freedom. While the cookouts we have are just for fun. Another way we celebrate the founding of our country is to celebrate (by getting out of school) Presidents Day and Columbus Day, the second person to come here other than the Indians.

In conclusion, what I think about when I hear patriotism is what the founding fathers did for us, the symbols that they have picked for this country and why, and how we celebrate the forming of our country.

History of the American Flag | A Capitol Fourth | PBS

What Does It Mean to be a Patriot?

A patriot is someone who stands up for their country and is willing to defend it at all costs. America is a wonderful country and we should be willing to defend it and stand up for our rights. Our Founding Fathers are some of the greatest patriots of all time. They risked their lives for our country and to give us the freedoms we have today. Our military is another example of a patriot. Our military risks their lives every day to keep our freedom and rights. Ronald Reagan said, “Freedom is one of the deepest and noblest aspirations of the human spirit.” Freedom is something we should do anything to keep.

What is Patriotism to Me?

Patriotism is the word that describes a person who is loyal to their country. To me, Patriotism is very important because if nobody liked their country then it would crumble. Nobody would run for president and no other countries would want to help us. So everybody in some way needs to support their country.

People who support their country usually show their patriotism. When you fly the flag it shows that you respect your country. Every year I go to the Memorial Day celebrations. You can do the same by going to your local celebration. If you don’t have a Memorial Day celebration suggest it to your parents and see what they think. Charles E. Jefferson said, “A man is a patriot if his heart beats true to his country.”

Our veterans are the most important to our country. They have fought for our country and have made the sacrifice of leaving their families. They stopped what they were doing to go into the armed forces. They quit their jobs and paused their life to go serve their country. Some didn’t have a family when they came back. That is the ultimate sacrifice and they didn’t deserve to lose everything. They say 11% of American homeless are veterans who had nothing when they came home.

Patriotism is very important to me because it is what holds this country together. Overall we have an amazing country and I wouldn’t want to live anywhere else. Even in the bad times, I don’t doubt this country can defend itself.