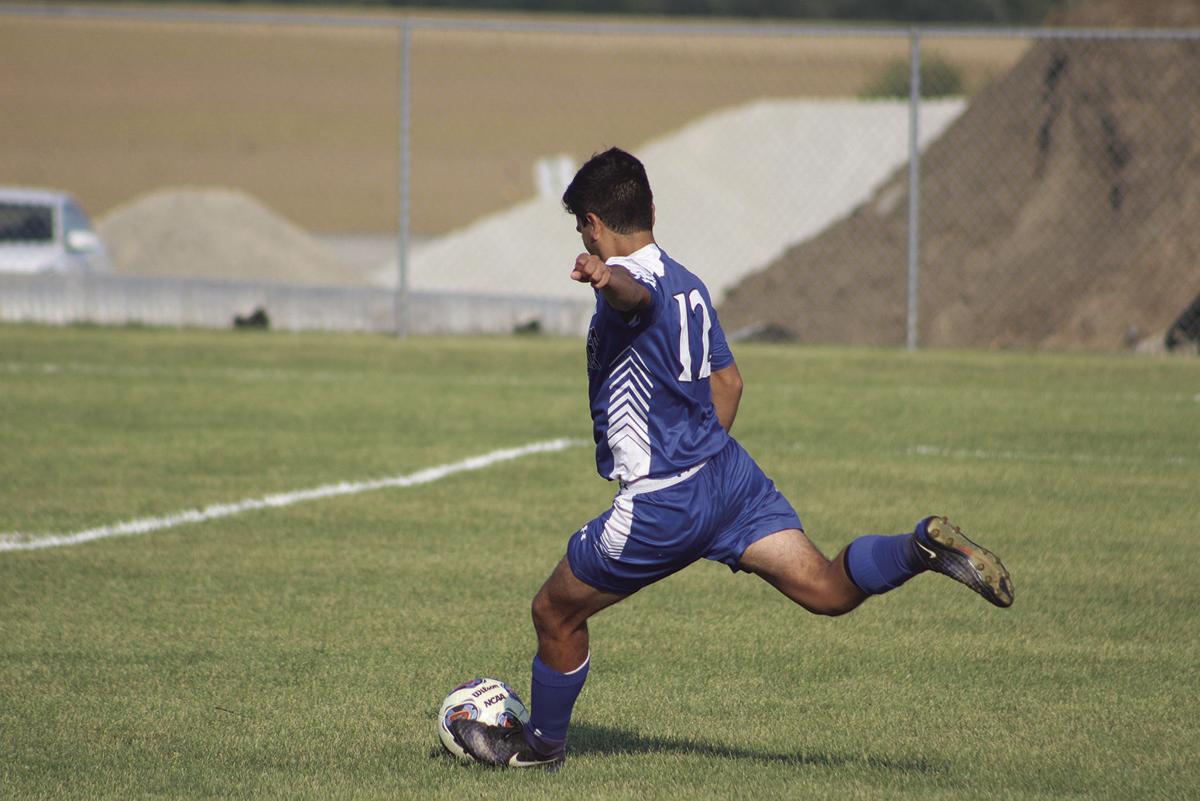 (Above) Hoopeston Area’s Isaias Diaz lines up a kick during the Cornjerker Classic Friday in Hoopeston. 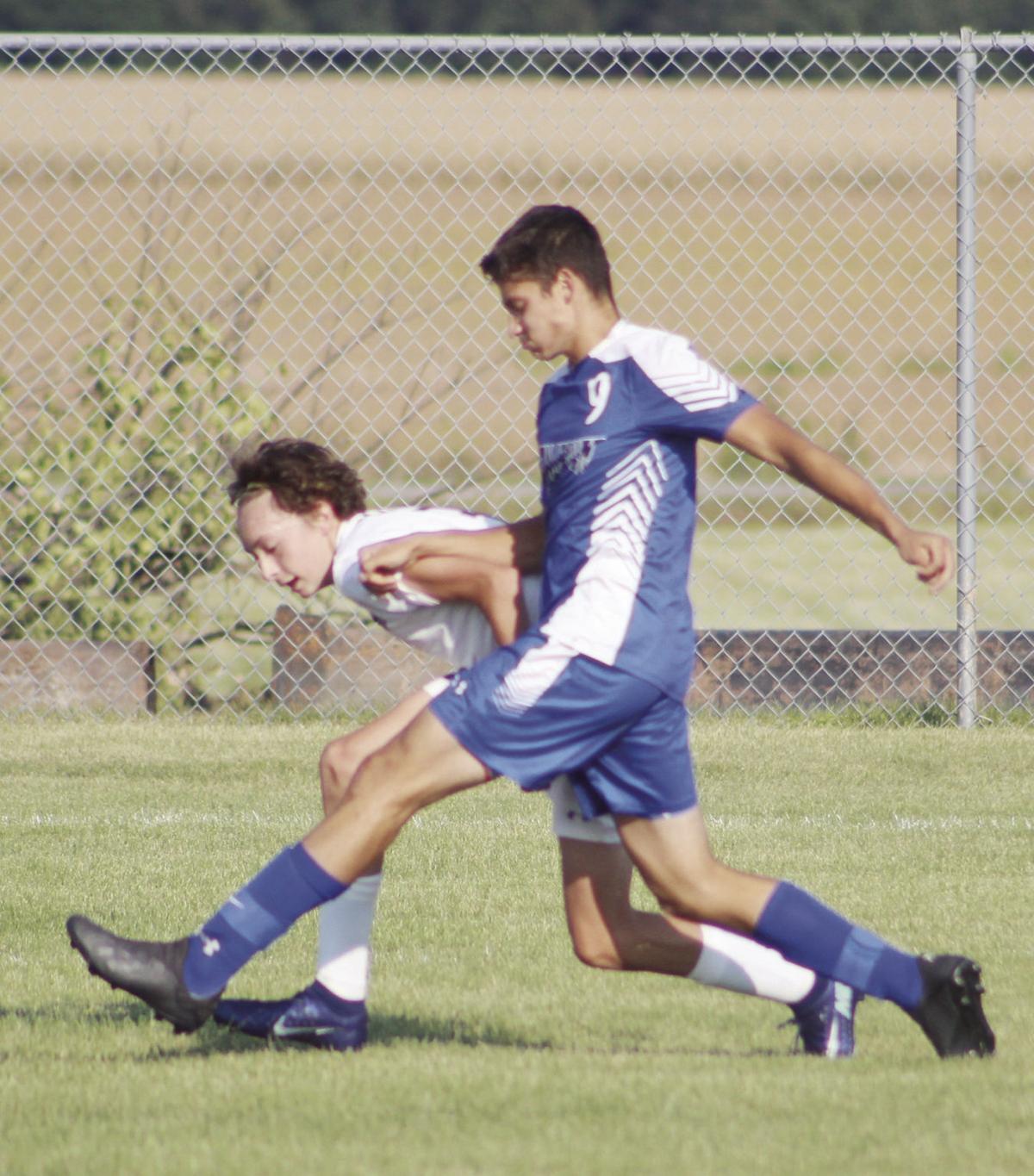 (Left) Hoopeston Area’s Gabriel Joneikis jockeys for position with an opponent during a game Friday. 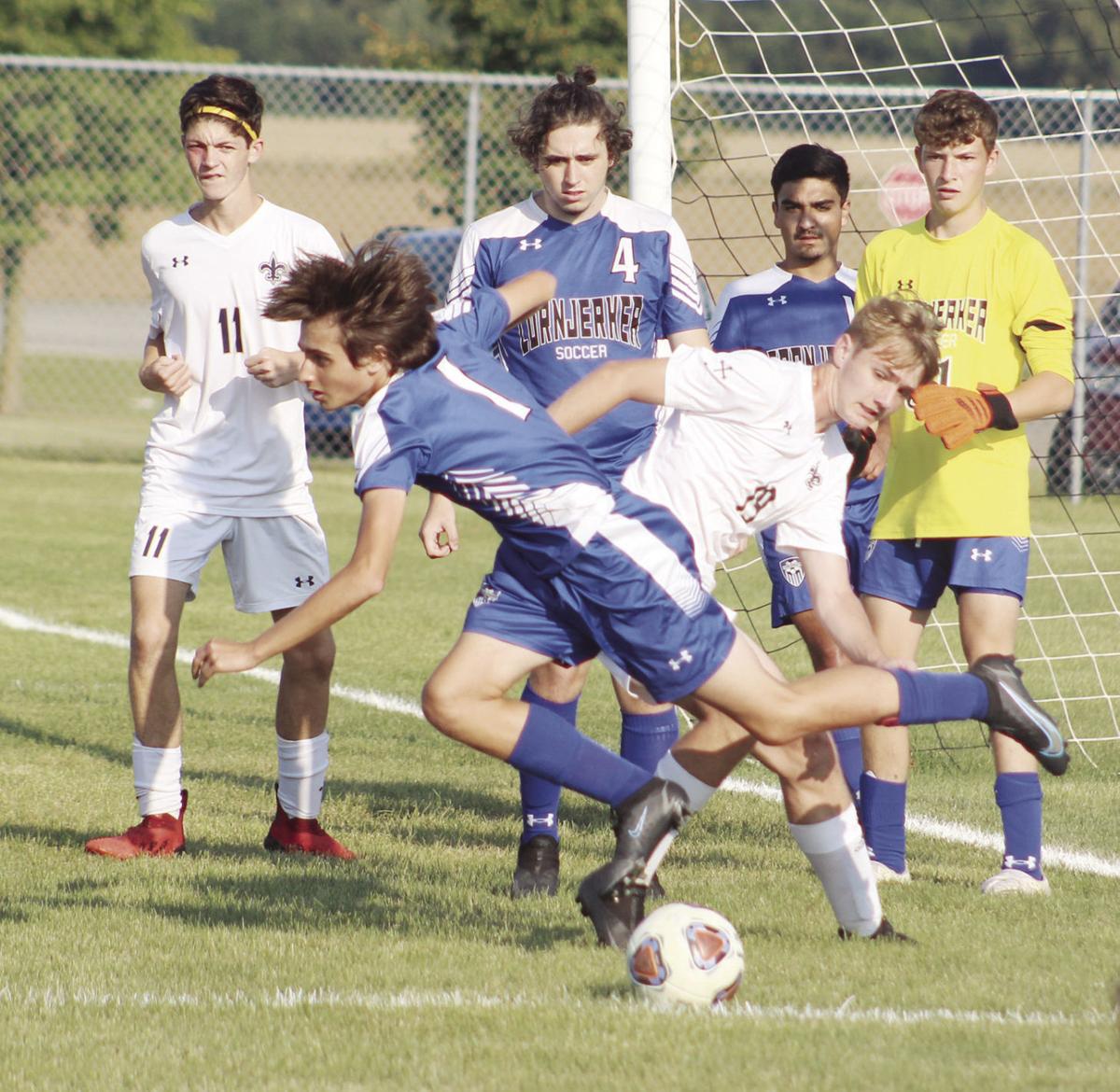 Hoopeston Area’s Dylan Judy grapples for control of the ball in front of the net Friday in Hoopeston.

(Above) Hoopeston Area’s Isaias Diaz lines up a kick during the Cornjerker Classic Friday in Hoopeston.

(Left) Hoopeston Area’s Gabriel Joneikis jockeys for position with an opponent during a game Friday.

Hoopeston Area’s Dylan Judy grapples for control of the ball in front of the net Friday in Hoopeston.

The Cornjerkers jumped out to a goal lead, when the first goal was scored by Ben Brown and the assist to Nick Hofer. Ten minutes later the two seniors once again worked together to get Ben Brown’s second goal and Hofer’s second of the half to make things 2-0. The Blue Devils fought right back with five minutes left before half-time Ethan Tutwiler was able to score on a rebound to cut the lead to one. Less than two minutes until half the Blue Devils Liam Oxendine was able to tie the score up thanks to Hayden Rice beautiful throw-in.

Second half was all Cornjerkers when Brown scored three more goals in the second half making him five goals on the evening. Talen Gredy and once again Hofet set up Ben for two of his three goals in the second half. Derek Drayer and the defense took care of business after Brown’s fifth goal to shut down the Blue Devils. Derek Drayer started in goal, saving ten of twelve shots while earning his first victory of the year after coming off knee issues. The 5-2 win put the Cornjerkers at 6-2-1 overall and 5-0 in VVC play.

The Cornjerkers did not come ready to play for the early morning Saturday game of the Cornjerker Classic, however they had just enough juice to pull out a victory over Clifton Central 3-1.

Talen Grady got the Cornjerkers on the board thanks to Isaias Diaz setting him up. Second half the Comets of Clifton Central scored on a penalty kick to tie the game up 1-1.

Later in the half Ben Brown was fouled in the box which put Ben on the penalty kick line. Brown made a great shot to put the Cornjerkers up 2-1. Diaz finished things off with a rebound goal to make it a 3-1 victory. Freshman Dylan Judy got his first high school start in goal. Dylan only let one ball find the back of the net. Dylan finished the game with five saves.

The Cornjerkers’ second game of the day did not go the way they wanted.

The Oakwood Salt Fork Comets defeated the Cornjerkers 4-2. The Comets jumped out to an early lead wehn Reef Pacot and Grant Powell each had a goal to make things 2-0. Cornjerkers got on the board Kayden Wallace made the things 2-1, but seconds later the Comets scored when Joshua Ruch made things 3-1 at halftime.

Cornjerkers Talen Gredy cut into the Comet lead with the asist. Comets put things away later in the game with Grant Powell getting his second goal of the game.

The Hoopeston Area Cornjerkers were back at it Monday night as they hosted Judah Christian and got the victory 6-2. Freshman Dylan Judy started in goal, saving two shots for his second win. Kaleb Hollen came in and finished the game by saving the only shot he had against him. Senior Nick Hofer made things 1-0 when he scored on a rebound. Cornjerkers made the score 2-0 when Talen Gredy was able to score thanks to Ben Brown cross. Judah Christian cut the lead in half weh Joey Limentato scored from Evan Payan. Isias Diaz made it 3-1 at halftime when he scored on a rebound.

In the Second half the Cornjerkers scored fifty seconds when Talen Gredy took a corner kick and Preston VanDeVeer was able to jump high above to head the ball into the net. Ben Brown got his first of two goals on the night with a great throw-in from Nick Hofer. Judah fought to try to make it a game when Joey Limentato scored once again. Ben Brown and Isaias Diaz worked together to finish it off.

The Hoopeston Area Cornjerker Soccer team jumped back into VVC play against Iroquois West. The Cornjerkers improved their VVC record to 6-0 with a 4-1 victory. Kayden Wallace got the Cornjerkers on the board at the twenty minute mark of the first half by getting his head on the ball after Nick Hofer fired a throw-in pass to him. Less than two minutes later Talen Gredy found himself in a perfect spot to make it 2-0 after Hofer once again made a great crossing pass. Nick Hofer scored with five minutes and twenty-seven seconds to make the score 3-0. Iroquois West’s only score came right before halftime when Andreade Santiago was able to convert after a Cornjerker mistake.

The only goal of the second half was when goalie Owen Root punted the ball across the half-line and Talen Gredy took four dribbles and made a very nice shot in the lower left corner. Owen Root was the winning goalie with two saves. The Cornjerkers record sits at 9-4-1 overall and 6-0 in VVC. The Cornjerkers will host Watseka on Thursday.