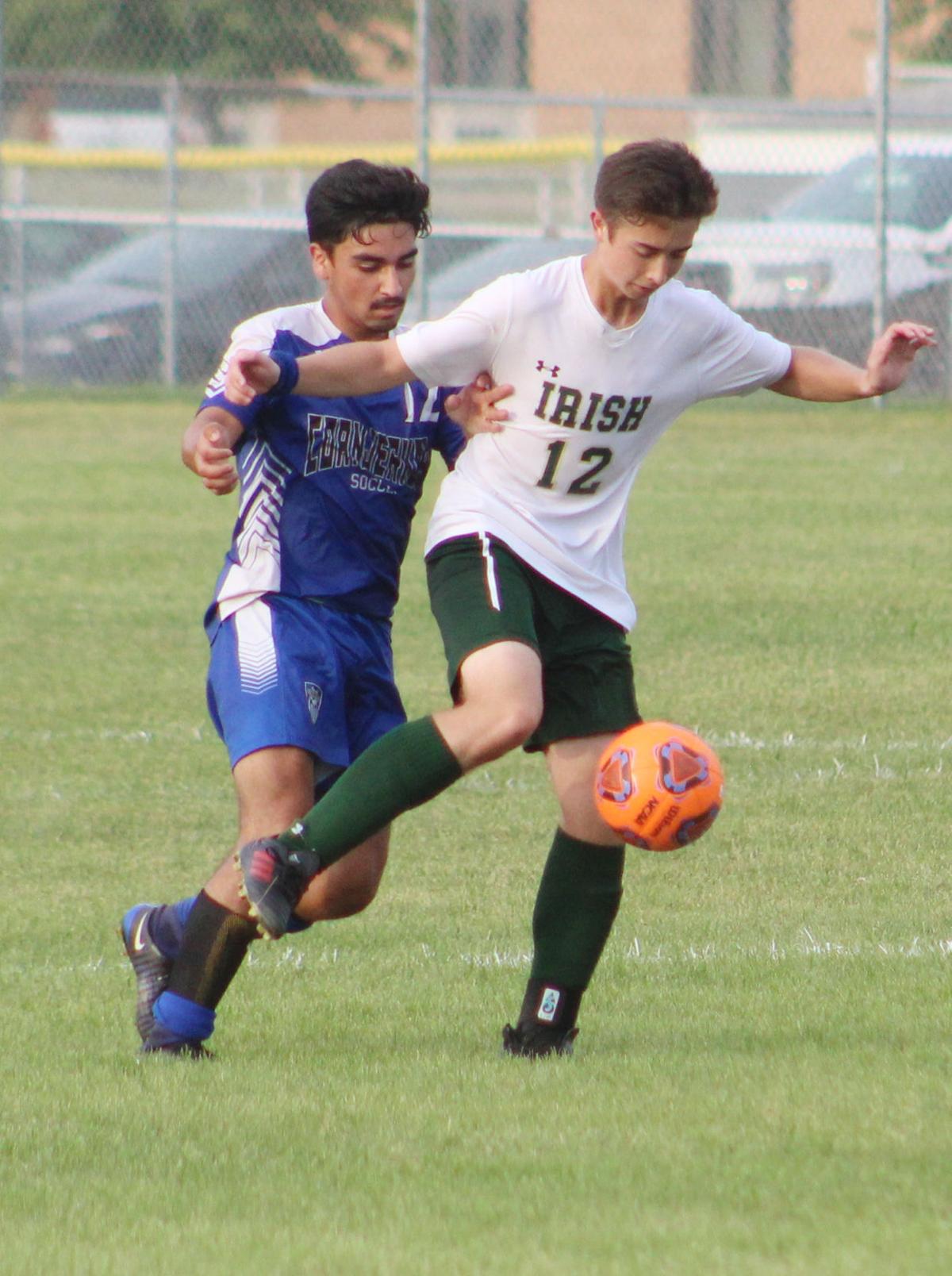 Isaias Diaz tangles with a Bishop McNamara player during Monday’s game in Hoopeston. 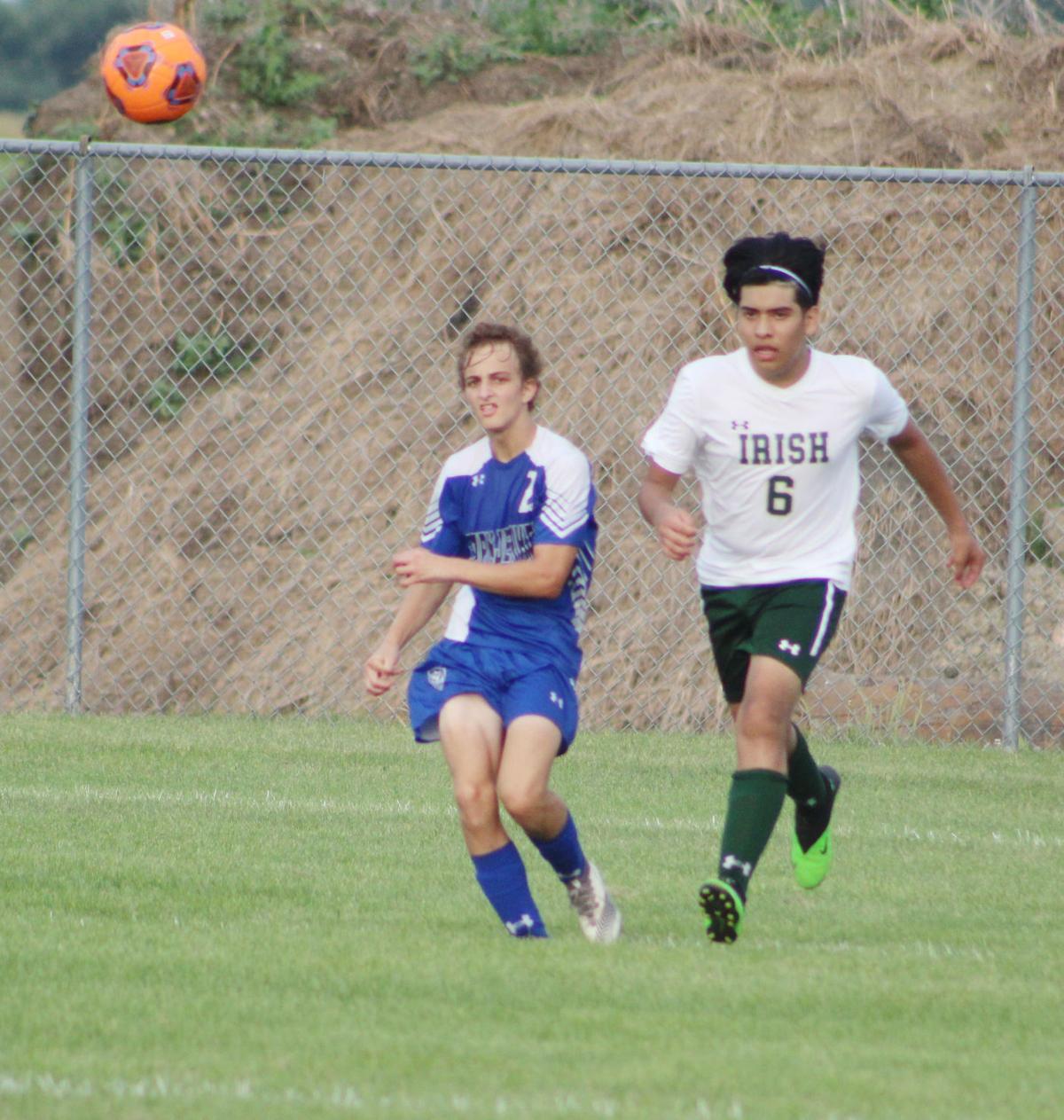 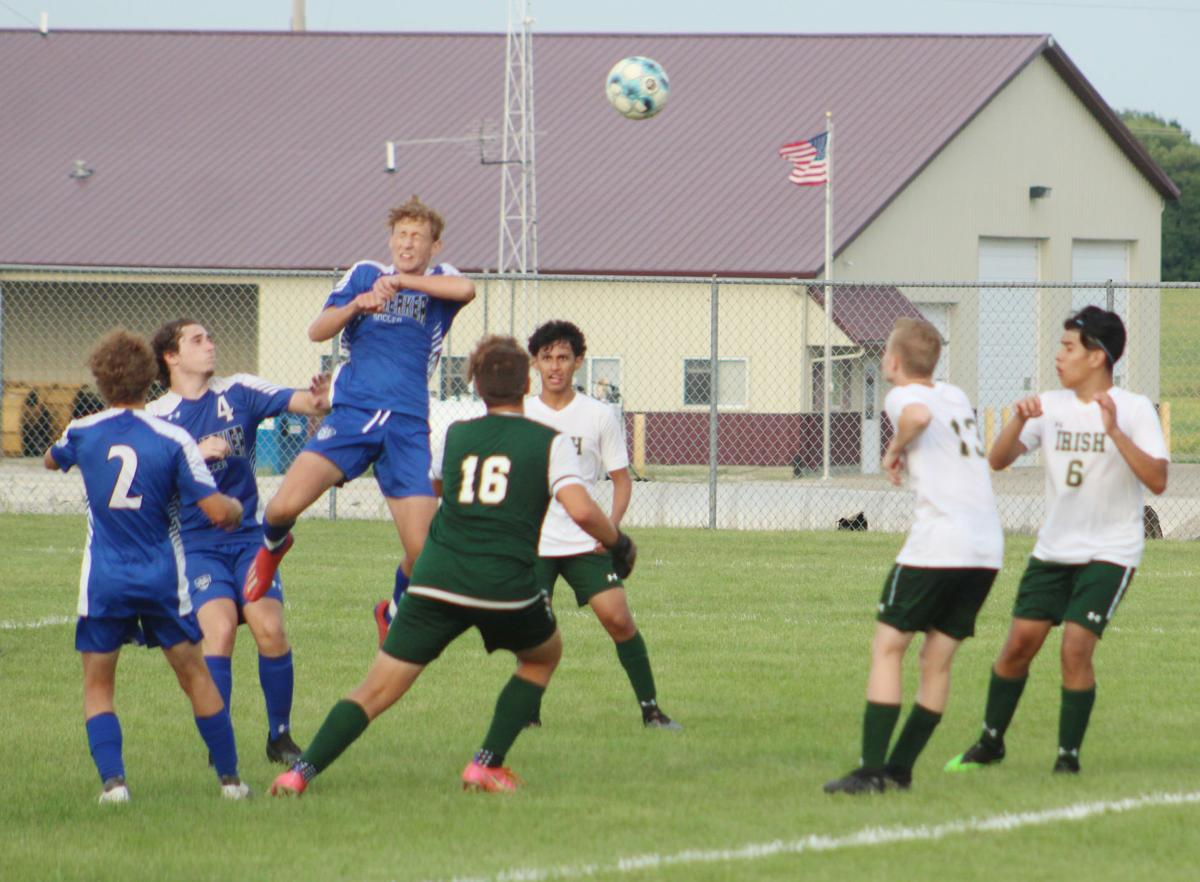 A play from Monday’s Hoopeston Area/Bishop McNamara game in Hoopeston. 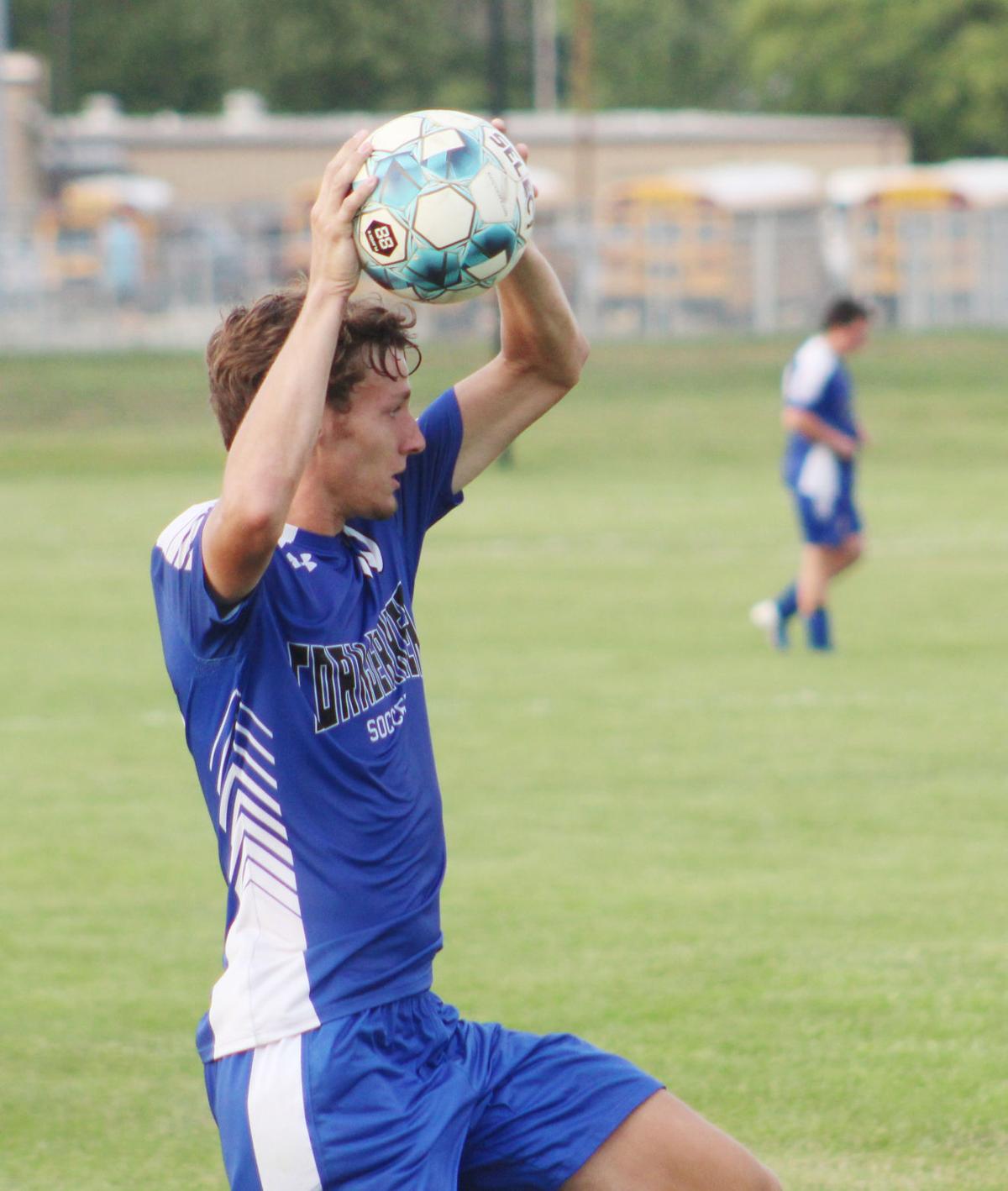 Hoopeston Area's Nick Hofer looks to toss in the ball during Monday's game.

Isaias Diaz tangles with a Bishop McNamara player during Monday’s game in Hoopeston.

A play from Monday’s Hoopeston Area/Bishop McNamara game in Hoopeston.

Hoopeston Area's Nick Hofer looks to toss in the ball during Monday's game.

Hoopeston Area opened up their first home game by defeating a very talented Georgetown Ridge-Farm/Westville soccer team by the score 4-0.

The Cornjerkers got on the board at 22:23 with Isiais Diaz in the right spot and the right time to make things 1-0 by scoring on a rebound.

Talen Gredy scored his first of two goals about six minutes later once again on a rebound to make things 2-0.

Ben Brown scored the team’s third goal of the half when he made some fancy moves with the ball and was able to find the back of the net.

The defense did an outstanding job keeping track of very talented forwards by the GRF/W team. Kamerin Cade, Preston VanDeVeer, and Gabriel Joneikis took turns running down Bina who has very good speed. Their one-on-one ball play was able to slow things down.

Sophomore Mason Rush keeps showing great improvement on the defensive backside to lock down the back post.

Sean Hudson, Cameron Zorns and Nick Hofer also went back on defense to set a good wall in front of Owen Root who saved all eight shots earning his second win of the year and Cornjerkers second shut-out of the year.

Talen Gredy put the game away with 26:30 left in the second half when Diaz was able to chip the ball in front of the goal where Talen was able to get his head on it to make the score 4-0.

The Cornjerkers kicked-off a very busy week with their first of four games in five days against Bishop McNamara Monday.

The Cornjerkers scored less than two minutes in the game when Nick Hofer found Talen Gredy for the only goal of the game.

Bishop Mac tied things up in the second half and that was all the scoring on the night.

Owen Root got the check in the tie box by saving six of the seven Bishop Mac shots.

Hoopeston Area jumped back into VVC play Tuesday night looking to go 3-0 and be all alone in first place.

The Cornjerkers got on the board first when Isaias Diaz was able to turn the corner and beat the goalkeeper on a great shot to make things 1-0 less than five minutes into the game.

The Cornjerkers took a two goal lead when Diaz was able to make a great pass to Telen Gredy who was able to get a great shot off.

The Oakwood-Salt Fork Comets were able to get on the board when Grant Powell received a pass from Joe Lashuay to get within one goal.

Cornjerkers came out after half-time ready to put things away when senior Kayden Wallace was able to charge the goal to make the score 3-1 after Gredy was able to make the perfect cross to find Wallace. Root earned his fourth win of the year in goal saving seven of eight shots on goal from the Comets.

The Cornjerkers ‘ record stands 4-0-1 overall and 3-0 in conference play.

The Cornjerkers will be back home on Thursday taking on St. Joe-Ogden.