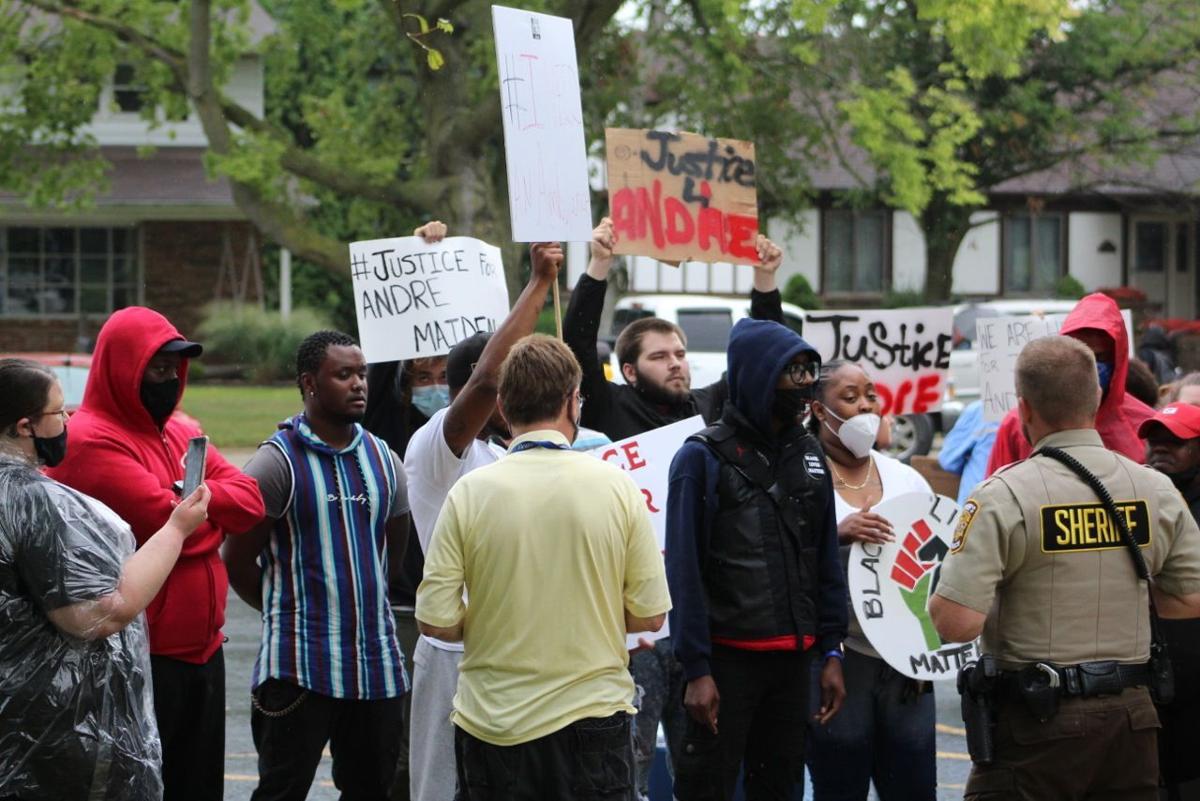 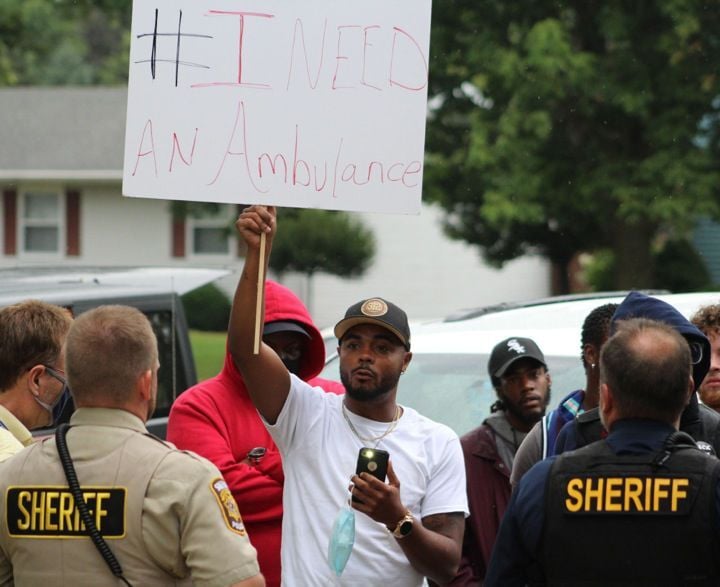 Miles Maiden says he and his family have questions surrounding the death of his brother, Andre, an inmate at the Iroquois County Jail who died last week. 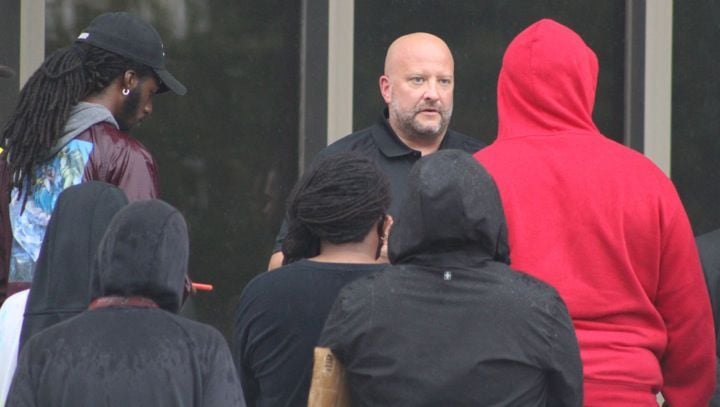 Sheriff Derek Hagen talks with protesters on the steps of the Iroquois County Courthouse Tuesday afternoon. 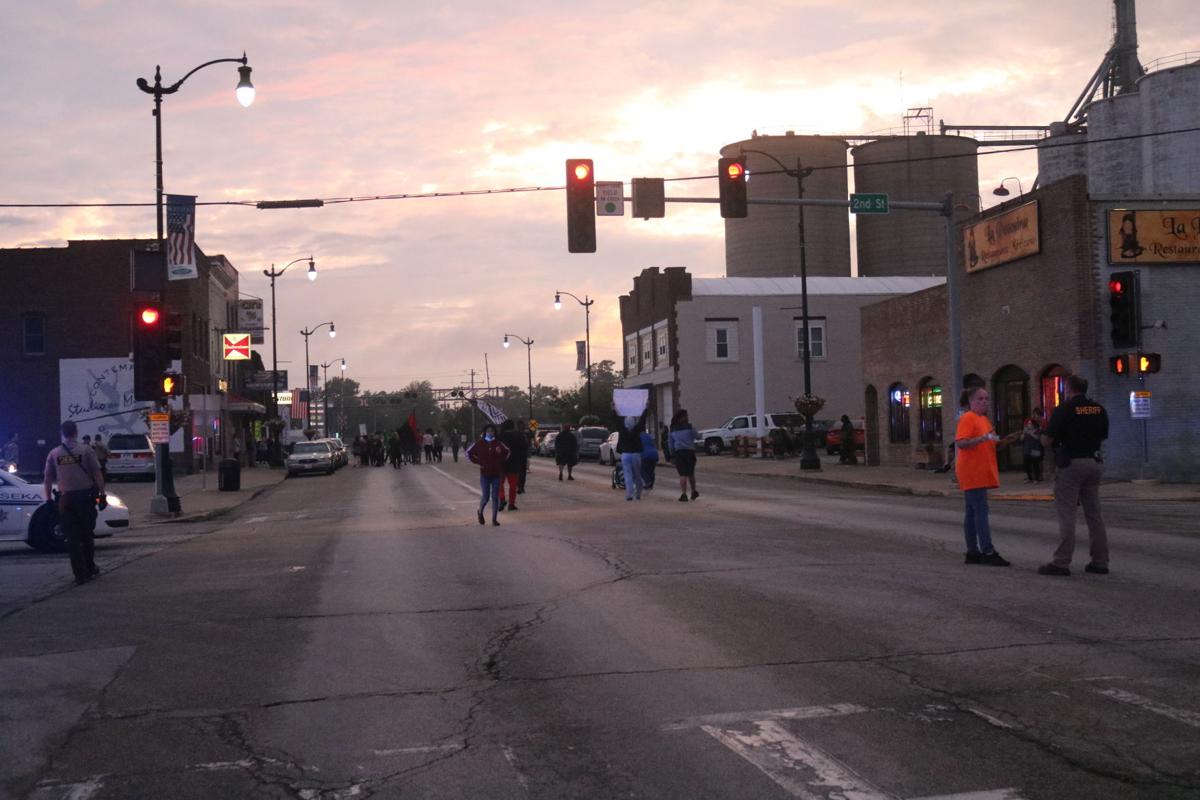 Miles Maiden says he and his family have questions surrounding the death of his brother, Andre, an inmate at the Iroquois County Jail who died last week.

Sheriff Derek Hagen talks with protesters on the steps of the Iroquois County Courthouse Tuesday afternoon.

With shouts of “Justice for Andre” and “Say his name” a group of protesters gathered at the Iroquois County Jail and Courthouse Tuesday afternoon saying they are seeking answers into the death of an inmate.

The deaths of Andre J. Maiden, 24, Hoopeston, and Jason P. Fancher, 47, Milford, are being investigated by Illinois State Police.

The two men were incarcerated at the Iroquois County Jail and died in the same week. Both were in jail awaiting trials on separate murder charges.

Autopsies for both men found nothing definite and coroners from Iroquois County, where Andre Maiden died, and Champaign County, where Fancher died, say they are awaiting toxicology reports, which take about two weeks.

Administrators outline issues with remote learning at board meeting

Miles Maiden said his brother Andre had complained about throwing up and being very ill. He said the group was gathered in Watseka Tuesday afternoon because “we are here to bring to light injustices at the Iroquois County Jail and wanting to know their medical protocol because my brother called me the day before he passed stating that he needed an ambulance that they refused him.”

Miles Maiden said that the family is also having an independent autopsy done.

Miles Maiden said, too, that the death of Jason Fancher is also “tragic” and that they have questions about his death also.

Sheriff Derek Hagen met with protesters out on the steps of the Iroquois County Courthouse and said that the state police are investigating the deaths. Family and friends said calls Andre made were taped. They want to know when those calls will be released. Hagen said those, along with all the other evidence, medical records and documentation regarding the case, have been turned over to the Illinois State Police for that investigation.

The group left the courthouse and jail area and then went downtown, where Second and Walnut was blocked for a time by the protesters with police from several agencies on scene. The protesters again shouted “Andre Maiden” and other chants, then got in their vehicles and left. Many of the local bystanders gave the police applause, praise and cheers.