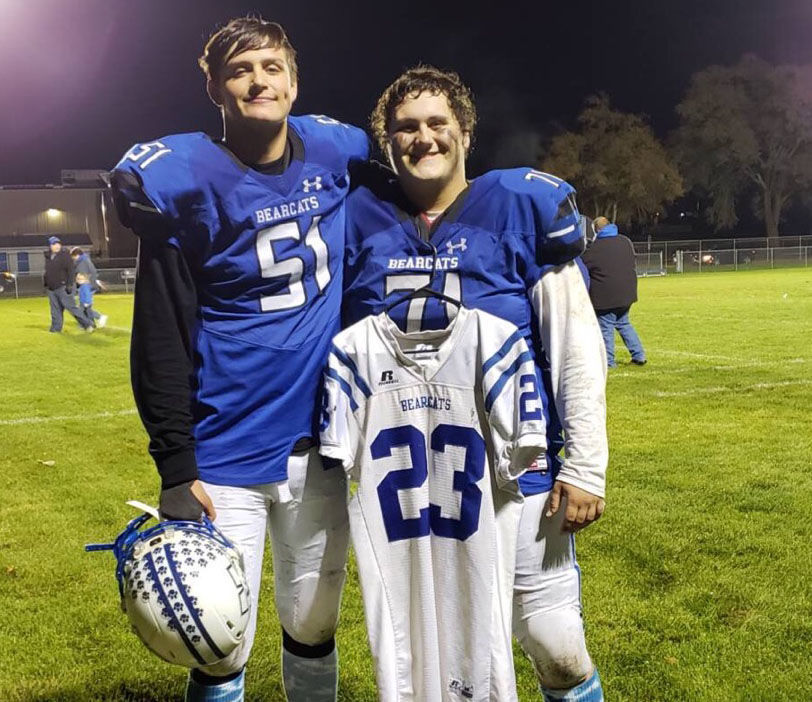 A young poet is working out the feelings of losing a friend through poetry.

Rudy was inspired to write poetry in junior high, when teacher Liz Martin had the class write a whole poetry book. When he got started he realized he liked it.

He’s written 20 poems so far, and these are just ways to express himself, not necessarily for a class. He said, “They may not all be great and something I’d like to share.”

This last poem is different. This poem has been developing for the last two years.

Rudy and Brenden had only been friends a year or so before. The first time they met was riding from Cissna Park to football practice in Milford. Brenden was an incoming sophomore, as he was newer to the area, and Rudy was going into his freshman year.

Rudy remembers Brenden: the “B-roll” he was called in pickup basketball games, the car rides to school Rudy would get from him, and the nice catch along the foul line in a baseball game. There’s also the football game at Bismarck-Henning where Brenden got hit hard. He was still able to ask the trainer, “Do I still look pretty?” as blood was coming down his face. He would later go back out on the field give a hard hit back to the opponent.

“Brenden made an impact on a lot of people in the little time he was here,” said his father, Brad Rose.

“Throughout the whole school,” said Rudy, “we really did see what he could do.” He said in the club room one day at basketball practice the guys sat around telling stories about Brenden. “We really realized how much we all missed him.”

The 2018-19 football season would later begin. He said it starts in August with some fooling around with olympic games and team building exercises.

At then end of the first practice, head coach Clint Schwartz went to a box and grabbed a #23 jersey — Brenden’s jersey — and that jersey went to every game, he said. He and Jarid Schunke were a big part in being responsible for it going with them. Before each game, Rudy said he and friend Ryan King, currently a junior, would take the jersey aside and talk to it in memory of Brenden.

The team would go through the season thinking: How can we do it without him? How would he be contributing? “He was the guy who was willing to do all the dirty work,” Rudy said of Brenden. Brenden was someone Rudy was motivated to be like on the field.

That season became a “magical season”, as the team won the state title in the inaugural season of eight-man football in the state. Rudy pointed out that the team had lost just three times in the last two years. This year they had a loss in the championship game.

“We did what we could together when I was with him,” said Brad of his son. He said he could tell his son was needing something more. “I would tell him ‘hold your head up and keep positive’.”

The loss of a child, Brad said, “It never goes away. It burdens me every day. He was too young. I look through my pictures and as I get older, he’ll always stay the same.”

He said the first year after the loss of his son he was on autopilot, and now, each day it’s something he thinks about.

But, since it has happened, he said, “tons of kids have reached out to me, asking how I’m doing. I make sure I ask them how they’re doing because they’re reaching out for a reason.”

Rudy is one of those kids. “That kid is so sweet and he is reaching out himself.” He said he tries to be there for Rudy however he needs it. “He’s full of emotion. Brenden was the same way. Both of them have big hearts.

“When they were together they were unstoppable, even though they only knew each other a short time.”

Brad said if he could give advice to anyone in a similar situation, it would be to “reach out”.

“Don’t sit back and watch things happen.” Plus, he said, kids need to talk to adults. “Look for signs.”

“He was one of my better friends. We were close at the end, getting closer,” Rudy said.

Rudy will continue to write poetry and express himself.

He’s graduating this year, with a few prospects to play college football. When in university he plans on majoring in psychology and minoring in English. His future goal, he said, is to become a counselor — maybe in a school.

Blooming of a Rose